Karl Taylor Died in a New York Prison. Now the State Has Agreed to Pay Millions.

Officials have also pledged to install video cameras and microphones throughout the Catskills facility where the death occurred.

In life, Karl Taylor never found his way. A high-school dropout hobbled by mental problems, he labored as a truck driver and kitchen helper in his hometown of Troy, New York, until a rape conviction sent him to prison for up to 55 years. Behind bars, his slippery grip on reality steadily worsened. He was in and out of psychiatric wards and spent more than 10 years in solitary confinement for failing to follow prison rules. That sorry cycle ended abruptly on April 13, 2015. A brutal fight erupted that morning between Taylor and correction officers after the prisoner refused an order to clean his cell at the maximum security prison in the Catskills where he was being held. Brought to the prison clinic, Taylor, 51, was soon declared dead.

In death, Taylor’s life has taken on new meaning. On Tuesday, the state of New York, represented by deputies to Attorney General Letitia James, agreed to pay $5 million to settle a federal civil suit filed by Taylor’s sister, Julia Ramsay-Nobles. It is believed to be the largest payment ever made in the case of a New York state prison fatality, according to the parties. 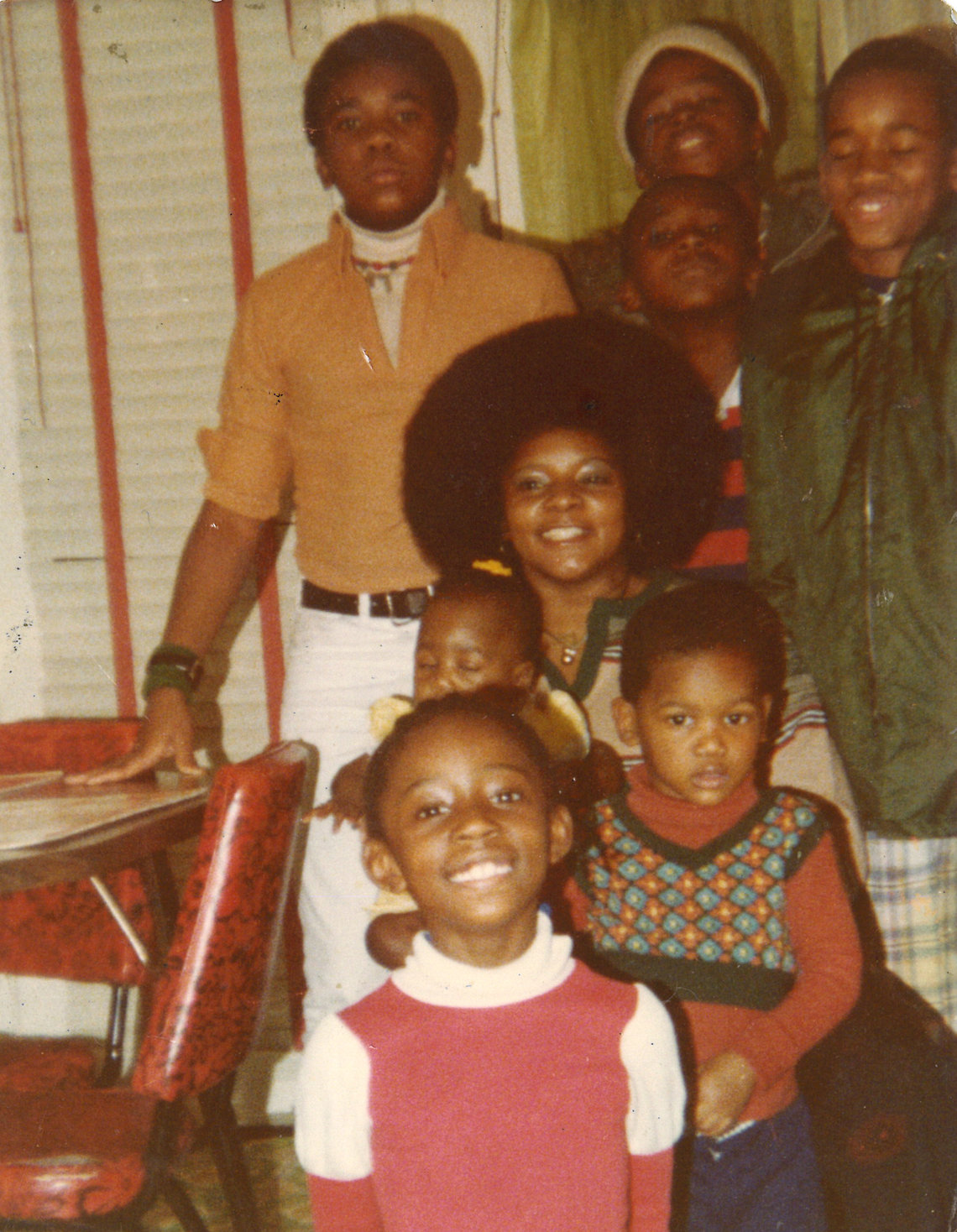 Taylor at 14, standing in the white turtleneck, with family members at Thanksgiving in 1977.

The settlement was reached just as closing arguments were to be made to a jury that had heard two weeks of often dramatic testimony from prisoners and guards about the fatal incident. Jurors also heard from a leading forensic pathologist who testified that Taylor died as a result of being choked to death, not from a heart attack as state officials have maintained.

Terms of the agreement included an unprecedented pledge by officials to install video cameras and microphones throughout Sullivan Correctional Facility in Fallsburg, New York, where the altercation occurred. The electronic monitoring will be on the same scale and scope as that installed at Attica prison where in recent years the number of violent incidents between officers and prisoners plummeted after surveillance equipment was installed in corridors and cell blocks there.

“I wanted those cameras in the halls,” said Ramsay-Nobles, who lives not far from where she and her brother were raised. “I am hoping they can save someone else’s life.”

Testimony in the civil case has also sparked new law enforcement interest in what happened. The U.S. attorney’s office in Manhattan, aided by the FBI, has undertaken a new criminal investigation into Taylor’s death, according to three sources. A spokesperson for the U.S. attorney’s office declined to comment. The probe comes more than four years after state police, along with the local district attorney in Sullivan County, found no wrongdoing. A grand jury determined not to bring criminal charges, ruling that officers had used appropriate force in response to a deadly threat, and that Taylor had died as a result of a history of hypertension and cardiac arrhythmia—essentially a heart attack.

In a statement, officials of the state’s Department of Corrections and Community Supervision said they would support the new inquiry by federal authorities. “Safety and security within our facilities are the department’s highest priorities,” the agency said. “The department has, and continues to pursue every avenue of identifying and pursuing wrongdoers in order to foster rehabilitation within a safe environment. Violations of either prison rules or the law,” the statement continued, “are met with administrative discipline or criminal charges.”

In the wake of Taylor’s death and similar violent incidents in other state prisons the department has adopted several new policies including training for officers in de-escalation techniques. It has also equipped guards with pepper spray as an alternative to physical force and has a pilot project for officer body cameras underway in seven of the state’s 54 prisons.

The story of what happened to Taylor unspooled in the courtroom of U.S. District Court Judge Colleen McMahon in lower Manhattan where a dozen uniformed correction officers listened intently to testimony before rising, one by one, to take the stand and give their accounts. The jury heard from a total of 23 witnesses including prisoners, guards, supervisors and nurses, along with medical and corrections experts.

Jurors heard a Rashomon-like version of what transpired that morning in 2015: Two correctional officers who were present on the facility’s E North cell block, a special unit for mentally impaired people, testified that, after being ordered to clean his cell, Taylor had blindsided a veteran guard named Bruce Tucker with a punch to the head that knocked the officer back several feet. Another officer, posted in a control booth overlooking the cell block, differed, saying in a video deposition played in court that he saw Tucker strike the first blow. 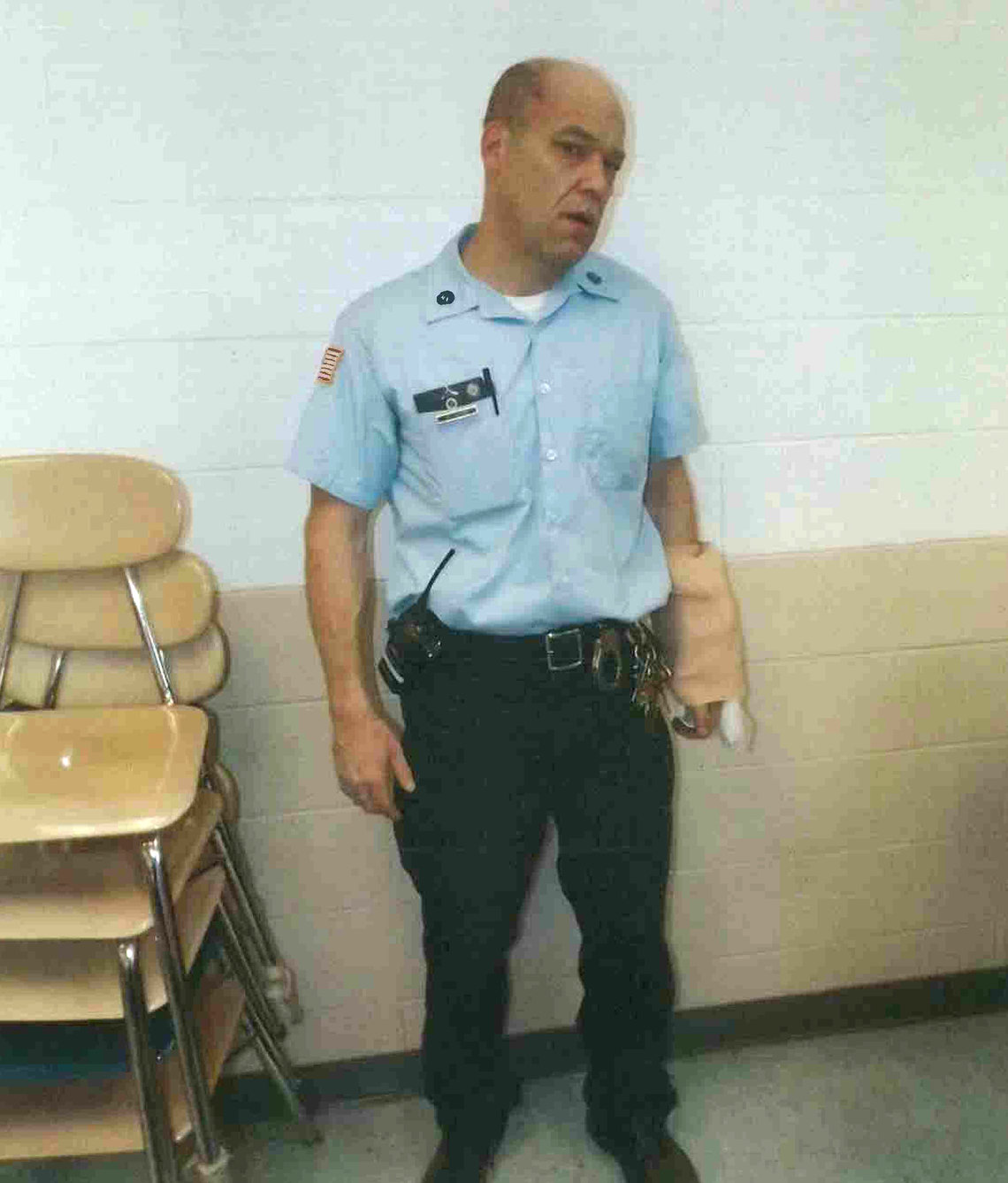 A photo of former correctional officer Bruce Tucker at Sullivan Correctional Facility shortly after Karl Taylor died, introduced as evidence in court. An ice pack is wrapped around his left arm, which was broken in the altercation with Taylor.

Prisoners testified that Tucker, with whom Taylor had long quarreled, struck first, using his baton to crack Taylor on the head more than once as the prisoner shouted that he wanted to see a sergeant and to be sent to a mental health unit.

Malik Thomas, who took the witness stand wearing dark blue prison garb, said he watched the confrontation unfold from his cell. Tucker, he said, “took out his baton as Mr. Taylor turned to walk up the stairs, and he struck Mr. Taylor repeatedly.”

All witnesses agreed, however, that as the two men grappled, Taylor managed to wrest the officer’s baton away from him. Once in possession of the long wooden stick, the prisoner struck Tucker hard enough to break his left arm, and hit another officer, Steven Witte, in the head.

“I just saw stars,” testified Witte. “It was like lights out. I thought, ‘I’m gonna die.’”

Shane Topel, another officer on the cell block at the time, became emotional on the stand as he described watching Witte go down. “I didn’t know if he was dead or alive,” said Topel.

After Taylor was subdued, an escort of seven officers who responded to the emergency led him down a lengthy corridor to the prison clinic. Handcuffed and protesting, Taylor walked off under his own power. But when officers arrived at the clinic, he was being carried, face down and spread eagled. Guards involved in the escort all testified that no one struck or choked Taylor in the hallway and that they picked him up after he refused to walk any further. But in a deposition read to the jury, a prisoner named Kurtis Williams said that he watched in the hallway as officers were “jumping on” Taylor during the escort. Two nurses who were in the clinic when Taylor arrived testified that when they examined him, he was unresponsive and had no pulse. A doctor declared him dead shortly afterward.

Tucker, who was forced to retire in 2016 due to his injuries, said he never saw Taylor again after he left the cell block. The former Marine, a 28-year veteran officer who trained several of the guards involved in the incident, also became tearful during his own testimony. “I was a good officer,” he said as he wiped his eyes with the sleeve of the black suit he wore for his testimony.

But Tucker’s tendency to use force had prompted official concern in Albany well before the incident. Prison superintendent William Keyser acknowledged on the stand that an assistant corrections commissioner, who had previously worked at Sullivan, had warned him in 2014 to be on the alert regarding Tucker and two other officers regarding their use of force. Despite that heads up, Keyser said he never cautioned or spoke to Tucker about the episodes. Evidence introduced at the trial showed that Tucker was responsible for more than half the use of force incidents by guards against prisoners who suffered from mental or physical disabilities.

Just days before Taylor’s death, Keyser said he had received a letter from another prisoner, warning that Tucker was “a bomb just waiting to go off” and “needs to be stopped before he kills someone.” The superintendent said he had forwarded the letter to a deputy but took no other steps. The superintendent acknowledged the risk that officers sometimes exact payback, known as “tune ups,” when guards are injured during confrontations with prisoners. “If they tune him up, [they] punch him, hurt him,” Keyser stated.

In Taylor’s case, lawyers from the firm of Patterson Belknap Webb & Tyler, who represented Ramsay-Nobles pro bono, alleged that the payback exacted was far worse. A forensic pathologist who testified as an expert witness for the plaintiffs, told the jury that Taylor’s cause of death was due to a chokehold placed on his neck by the fingers of someone’s right hand. That person had applied enough sustained pressure to fracture the small bones located behind the Adam’s apple and to block blood to the brain and air flow to his body, said Zhongxue Hua, a veteran medical examiner who is an autopsy consultant for several suburban counties.

“Specifically, it is the neck compression [that] caused his death,” Hua testified. Asked by attorney Daniel Eisenberg if there was any medical evidence indicating that Taylor had struck someone hard with his hand prior to his death, Hua said there was not. He said the autopsy failed to show the kind of bruising on Taylor’s hands that would have resulted from a tough punch to someone’s head. “There’s no bruises, which was medically called a contusion, on both sides of all the knuckles,” he said.

After the settlement was entered into the record, Judge McMahon thanked jurors for their service. Several lingered outside the courtroom to talk about what they had heard during the trial.

“I would have come to the same conclusion,” said Jerry Subryan, 59, of the settlement agreement. “You could see they were trying to cover up something,” he said. “Something happened that day.”

Other jurors agreed. “The officers and supervisors didn’t do their job,” said Odocha Mercedes. “It was disturbing.”

Adeel Mangi, who helped lead the law firm’s four year-long investigation of the incident, said that Taylor’s death “illustrates a culture of utter impunity among correction officers. A justice system that allows horrific retaliation by officers against mentally ill prisoners without any criminal accountability shames everyone associated with it,” he said.

When I first met Ramsay-Nobles in the fall of 2015 she was anxious to find out what had happened to her brother. I gave her the phone number of a prison advocate who, in turn, introduced her to the lawyers at Patterson Belknap. I told that story in November 2018, in an article co-published by The Marshall Project and The Atlantic. Ramsay-Nobles said she can now afford a headstone for the plot where her brother is buried. “He’s alongside my mom,” she said. “I was putting money aside to finalize that.”

Tom Robbins has been a columnist and staff writer at the Village Voice, the New York Daily News and The New York Observer. He is investigative journalist in residence at the CUNY Graduate School of Journalism.