The Rise of the Anti-Lockdown Sheriffs

Opposition to stay-at-home orders is the latest example of a history of powerful sheriffs, which stretches back to the end of slavery and the settling of the frontier. 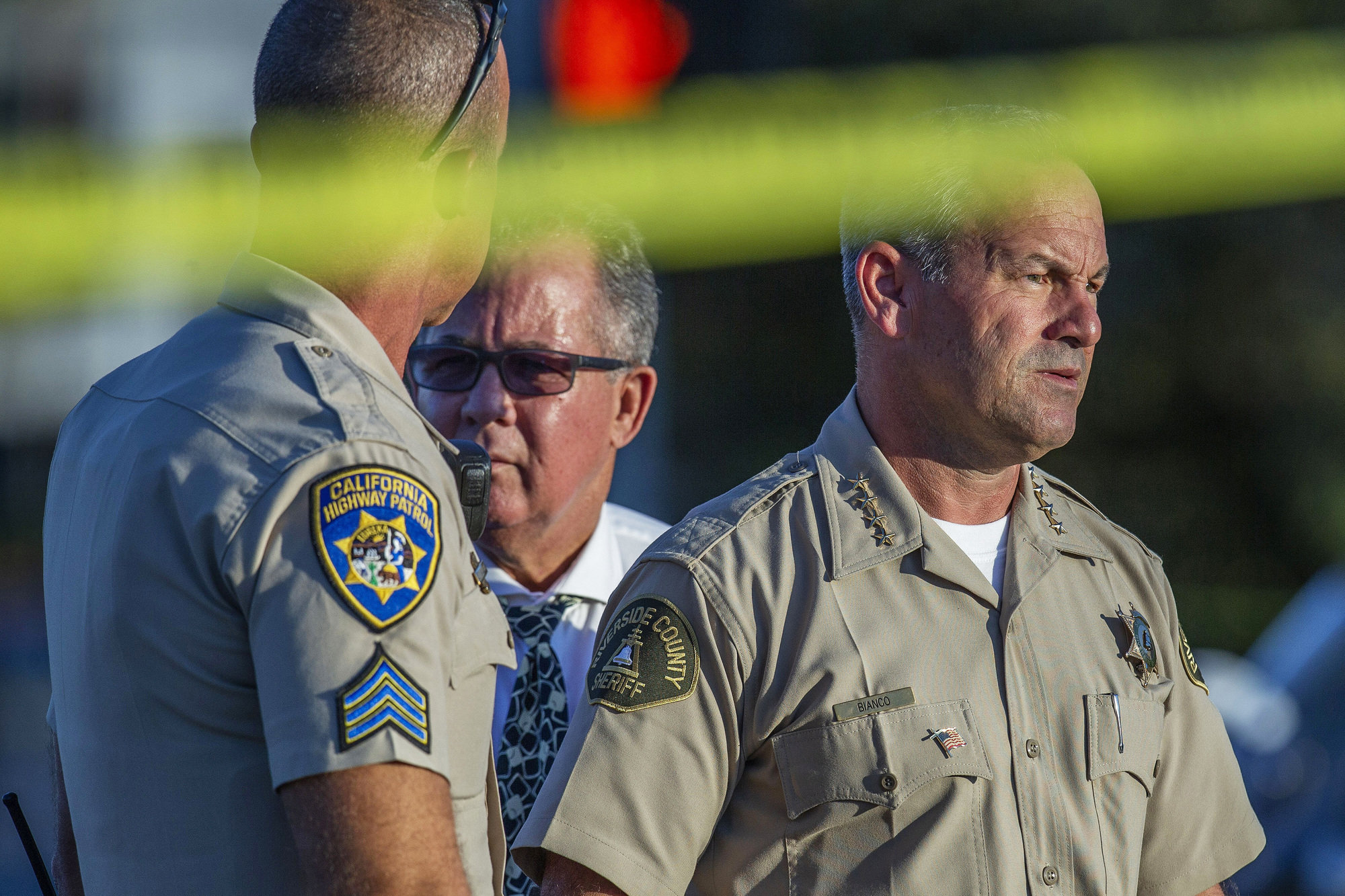 After weeks of closures due to the coronavirus pandemic, New Mexico governor Michelle Lujan Grisham said Wednesday that retailers and churches in the state may open at partial capacity, but that gyms and salons must stay closed, and that residents must wear face masks in public.

But the 65,000 residents of Chaves County have little to fear should they violate these orders.

“My department will not be out citing anyone for not wearing a mask,” Mike Herrington, the county sheriff, told The Marshall Project on Thursday. “I will not be enforcing any of those orders.” Herrington has already allowed at least one gym, among other businesses, to reopen in recent weeks.

Chaves County—which has reported 30 positive diagnoses of COVID-19, and two related deaths—encompasses Roswell, the town famous for its association with a debunked-but-widely-believed UFO sighting in the 1940s. It’s also one of many rural communities hit hard by the recent economic shutdown; the cancellation of the annual UFO Festival this month potentially deprived local businesses of a million dollars in revenue, according to KRQE.

Herrington is one of at least 60 sheriffs nationwide, spread across more than a dozen states, who are publicly opposing restrictions issued by governors, according to a Marshall Project analysis of news reports and official statements. There are likely many more quietly declining to enforce them.

All law enforcement officers have a great deal of discretion, but the power of sheriffs in particular stretches deep into American history, to the end of the Civil War and the settling of the frontier. This history can help us make sense of their increasingly central role in partisan battles about public health and economic recovery, as they clash with governors through viral Facebook posts and media appearances.

While police chiefs are appointed and thus insulated from politics, sheriffs are elected and many have built their reputations by defying state and federal laws in areas ranging from immigration to gun control. The best known sheriffs in America in recent years, Joe Arpaio of Arizona and David Clarke of Wisconsin, used racially charged criticism of President Obama to become high-profile allies of President Trump.

The stay-at-home orders are just the latest opportunity for sheriffs to get noticed, particularly in states with Democratic governors. (Seventy-five percent of the sheriffs in the Marshall Project count were in such states.) “Very rarely are they able to do things that voters know about,” said Zoe Nemerever, a political science graduate student who studies sheriffs. “Everybody knows about COVID.”

But to truly understand the role that sheriffs are currently playing in the political conversation, it’s necessary to go back much further—all the way to Reconstruction.

After the Civil War, sheriffs assumed the power vacuum left behind by slave owners, according to Douglas Blackmon, author of the 2009 Pultizer-winning history “Slavery by Another Name: The Re-Enslavement of Black Americans from the Civil War to World War II.” They were empowered by Black Codes to make arrests for congregating in public and being unemployed, and they oversaw the leasing of black prisoners as laborers in an economic system that in effect continued slavery. “Arrests surged and fell, not as acts of crime increased or receded, but in tandem to the varying needs of the buyers of labor,” Blackmon wrote.

Gilbert King, author of two books featuring Willis V. McCall, a violent, racist sheriff in 1950s Florida, found that throughout the civil rights era sheriffs were known members of the Ku Klux Klan. In the 1960s, Sheriff Jim Clark of Dallas County, Alabama, famously oversaw the beating of black voting rights demonstrators in Selma, Alabama. Giving power to sheriffs was in the interest of pro-segregation Southern leaders because it would be much harder for the federal government to track the actions of hundreds of individual counties.

The idea that a sheriff could stand as a bulwark of local control against state and federal laws shifted in the 1970s, from opposition to civil rights to the more arcane intellectual sphere of the Christian Identity movement. Minister William Potter Gale “preached that the Constitution was a divinely inspired document intended to elevate whites above Jews and racial minorities,” journalist Ashley Powers wrote in The New Yorker. This thinking underpinned the “Posse Comitatus” movement of the 1980s, which violently clashed with federal law enforcement while promoting the idea of “sheriff supremacy,” and which, Powers wrote, “cross-pollinated with other kinds of right-wing thought.”

The open racism receded while the idea of the sheriff’s power remained. Although sheriffs generally enforce state laws, in 1994, a group of sheriffs in Arizona and Montana sued the federal government, challenging a law that required them to perform background checks on people who wanted to buy handguns. The Supreme Court ruled in the sheriffs’ favor. One of the sheriffs, Richard Mack of Arizona, went on to found the Constitutional Sheriffs and Peace Officers Association, which advocates that sheriffs not enforce all laws they believe to be unconstitutional. In 2016, Mack was a prominent supporter of the Bundy family during their standoff with FBI agents over their right to let cattle graze on public lands.

The organization claims roughly 5,000 members. Political scientist Mirya Holman says the number of sheriffs who actively consider themselves members may be fewer than a hundred.

But even when they do not take loud political stands, their personal views shape the local justice system. Holman and a colleague surveyed hundreds of sheriffs and found that those who believed myths about domestic violence, including the idea that it is easy for women to leave abusive partners, are less likely to arrest domestic violence suspects.

Still, sheriffs do not always fall on the conservative side of partisan divides, especially when the federal government itself is led by a conservative president. In the Trump era, sheriffs from Charlotte to Cincinnati have been elected after promising to not cooperate with federal immigration authorities. Holman points out that sometimes sheriffs are simply requesting that the federal government work with them before sending federal agents into high risk situations in their counties.

As COVID-19 began hitting urban centers in March and governors began issuing lockdown orders, sheriffs began quelling rumors of checkpoints and mass arrests. “This is not Nazi Germany or Soviet Russia where you are asked for your papers!” wrote Sheriff Scott Nichols of Franklin County, Maine. Although Nichols noted that his deputies would still arrest people, his post was celebrated in conservative media as a “rebellion” against Gov. Janet Mills, a Democrat. (Nichols did not respond to a request for comment.) Other sheriffs simply said they didn’t have the resources to enforce these orders, having already been stretched thin by having to respond to everything from mental health episodes to drug overdoses.

Where Arpaio and Clarke built their reputations over many years, the route to political stardom has quickened in the COVID age, especially when a Democratic governor can serve as a foil. “Washington, Oregon, and Wisconsin are all examples where you have a liberal governor that’s been largely elected by the urban centers of the state, and a more conservative, rural area that feels like they’re being ignored and their interests are not being heard in the political process,” said Holman. “The sheriff becomes the representation of that conflict.”

Sheriff Adam Fortney, in Snohomish County, Washington, has been publicly feuding with the state leaders, and is now facing a potential recall election, while his supporters are raising money on GoFundMe. On May 5, Chad Bianco, the sheriff of Riverside County, California, told county commissioners, “I refuse to make criminals out of business owners, single moms, and otherwise healthy individuals who are exercising their constitutional rights.” A video of his comments went viral, and on May 8 he appeared on “Fox & Friends,” a show that had already hosted a Michigan sheriff critical of Gov. Gretchen Whitmer’s orders. 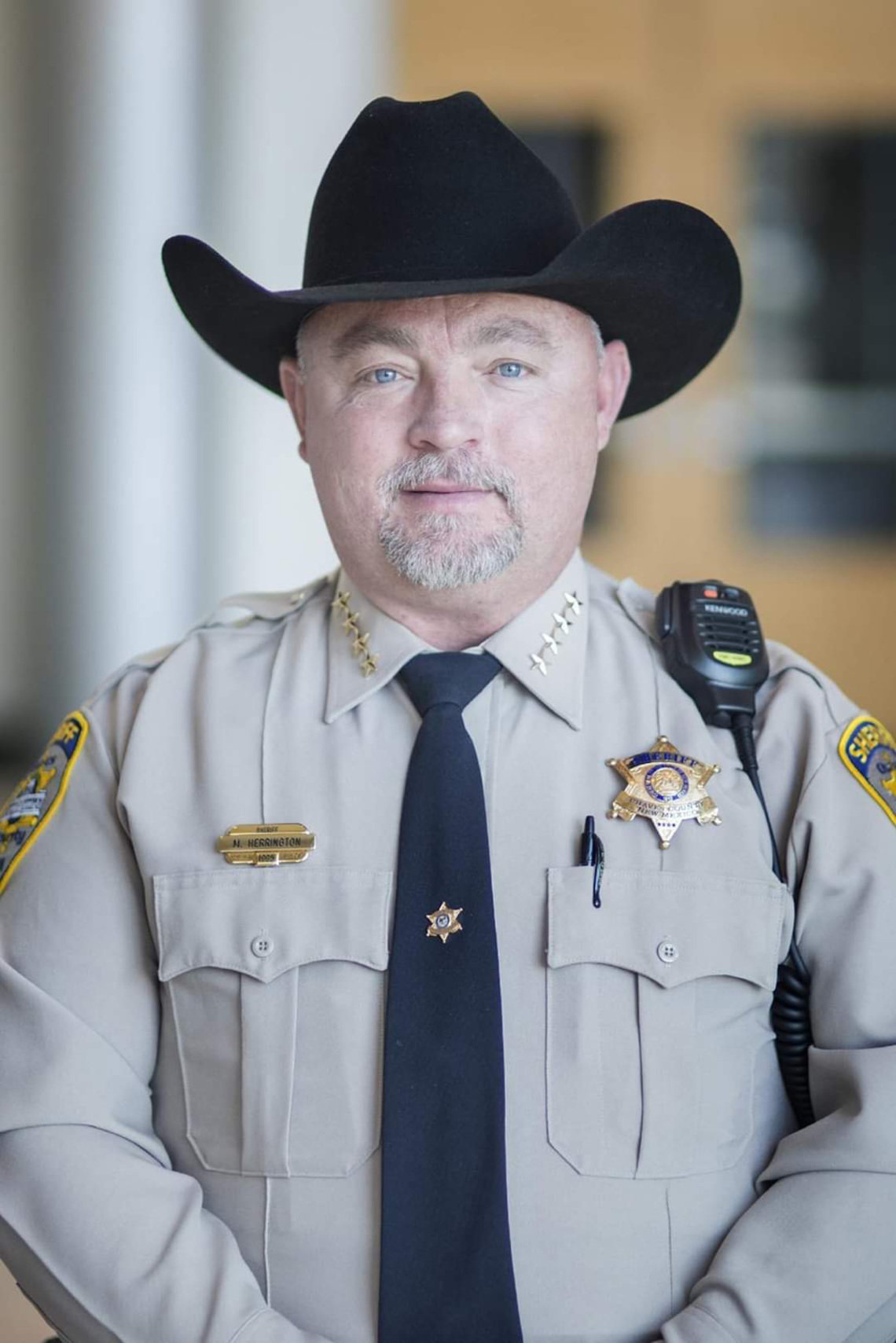 Sheriff Mike Herrington of Chaves County, N.M., is one of at least 60 sheriffs nationwide who are publicly opposing COVID-19 restrictions issued by governors

Herrington was elected sheriff of Chaves County, New Mexico, in 2018, after two decades as a deputy in his hometown of Roswell. He speaks less to the deep historical legacy of his role than to the daily struggles of his constituents. He’s sympathetic to the constitutional sheriff movement, but also cordial to his governor and eager to stress the non-partisan nature of his job, although he ran for office as a Republican.

In April, after Gov. Lujan Grisham extended the stay-at-home order until mid-May, Herrington said he was approached by small business owners, some of them literally in tears. They complained that Walmart and Target, allowed to stay open because they sold food, were also selling televisions and other big items to residents looking to spend their stimulus checks. These owners told Herrington that by opening, they could reduce crowding at the big box stores.The head of the New Mexico Sheriffs’ Association wrote a letter last week to Attorney General William Barr, asking him to consider whether the governor’s orders violated the civil rights of New Mexicans, and he similarly focused on how big-box stores have reaped the economic benefits of the closures.

“These are my friends and family,” Herrington said. “To look at the fear in their eyes, the fear of losing everything they have, tells me I have no choice but to stand and take on this fight.”

In his public statements, Herrington has told the governor he doesn’t want to be defiant, and invited her to negotiate on how to let businesses reopen sooner while still protecting public health. “Since before the birth of America the duty of the Sheriff has been to secure the Rights of the People,” he wrote on Facebook. “Every business in Chaves County is essential when the people are dependent upon that income to provide for themselves and their families.” Gov. Lujan Grisham has responded with a press statement asking New Mexicans to “stay the course” and follow her guidelines. There is little she can do to punish the sheriff.

Herrington did say no to drag races and little league games, and he’s encouraging people to stay home if they are sick, immunocompromised, or simply don’t want to put themselves at risk. He has also encouraged residents to stop threatening state police officers who were trying to enforce the governor’s orders. He is worried about crime going up as residents grow economically desperate.

For children’s birthdays, Herrington organizes small parades—more than one per day, he said—in which police and firefighters drive by their houses with lights and sirens. “We are delivering groceries, medicine, everything, to anybody, not just the elderly,” he said. “You call me with your receipt number, we’ll deliver it to your front porch.”

“We are saying: If you want to come out, you have that God-given right under the First Amendment,” Herrington explained, but “if you’re scared, if you’re being cautious, I will help you.”