Ahmaud Arbery and the Local Legacy of Lynching

How the white vigilante killing of the unarmed, black jogger in Brunswick, Georgia, is both an echo of past violence and a modern call to action. 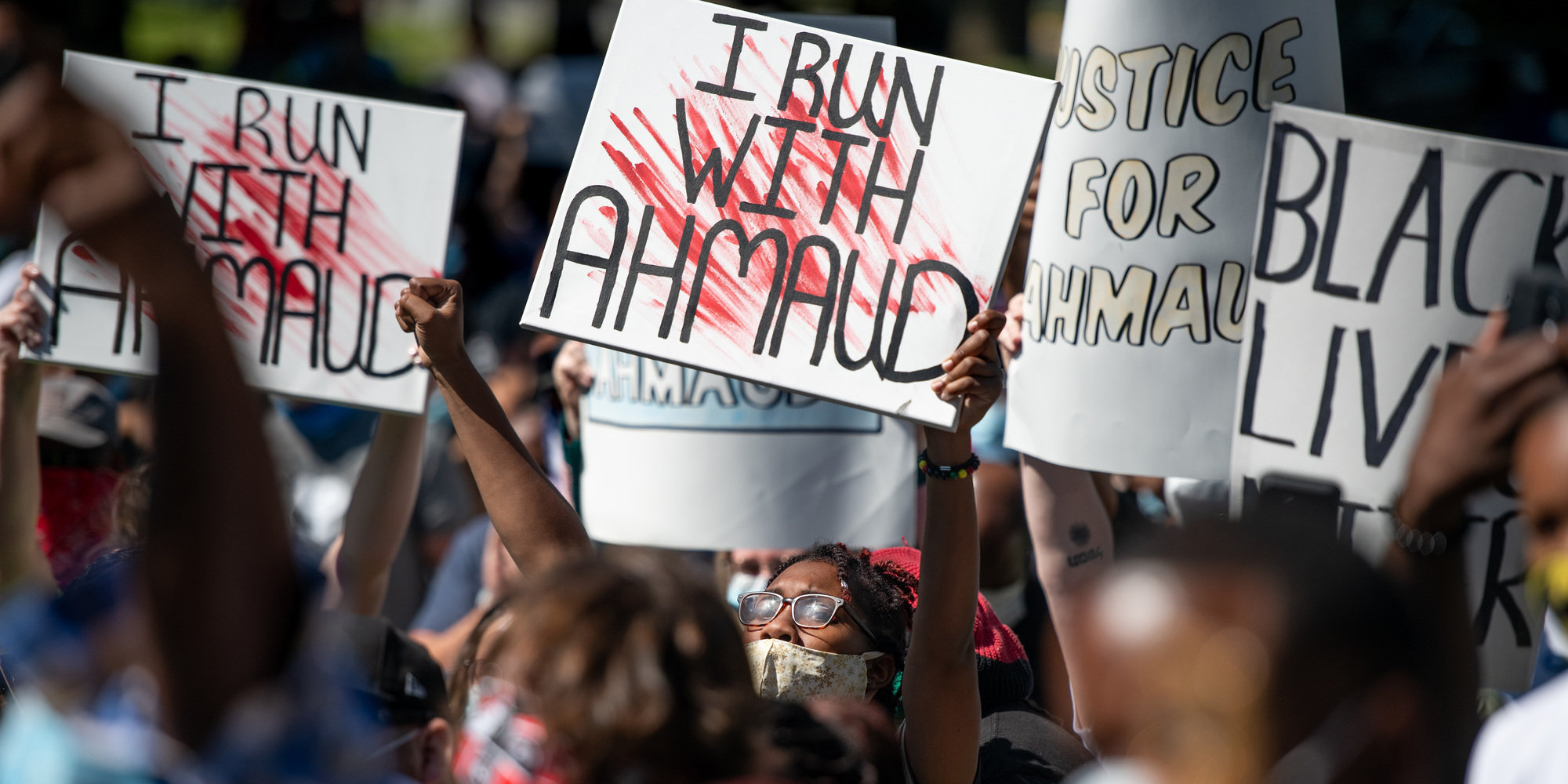 Demonstrators protest the shooting death of Ahmaud Arbery at the Glynn County Courthouse in Brunswick, Georgia, on May 8. Gregory and Travis McMichael were arrested the previous night and charged with murder. Sean Rayford/Getty Images
By Jennifer Rae Taylor and Kayla Vinson

On February 21, 1891, almost exactly 129 years before white vigilantes fatally shot Ahmaud Arbery in Brunswick, Georgia, a mob of white men lynched two black men named Wesley Lewis and Henry Jackson just outside of Brunswick. Without trial or investigation, they were hanged from a tree, riddled with more than 1,000 bullets, then left on display for thousands of white spectators to view. As one newspaper described the scene:

“...the population of Brunswick turned out en masse to visit the scene of the lynching. Vehicles were at a premium and it is estimated that more than 3,000 people made the trip to Dent Swamp during the morning. A few hundred yards away from the improvised gallows a country church was in full blast, and the singing of hymns almost within sight of the dead negroes made the scene a weird and impressive one.”

Between 1877 and 1950, more than 4,400 black men, women and children were killed in documented lynchings, primarily in the southern states of the former Confederacy, but also in the North and West. Lewis and Jackson were two of more than 500 documented lynching victims killed in Georgia. Though the Brunswick lynch mob that killed them was undisguised, and many witnesses viewed the deadly aftermath, no one was ever arrested or held accountable.

The United States has changed since white mobs used public violence against black people to enforce racial subordination and white supremacy. But the killing of Arbery, a 25-year-old, unarmed black jogger, by white men who assumed he was a local burglar, demonstrates how the presumption of black guilt and dangerousness is directly related to this country’s history of racialized terror.

An Echo of the Past

On February 23, Travis McMichael and his father, George, a retired Glynn County police officer and former investigator for the local district attorney, saw Arbery running and decided that he was the culprit in several local break-ins. They pursued him in their truck and eventually shot him as he struggled with Travis, who was wielding a gun. Local law enforcement told Arbery’s family that he had been killed while committing a crime and that the men who shot him would face no charges.

On May 5—more than two months after the killing—video recorded by a neighbor was released and widely shared via news platforms and social media. Immediately, viewers of the violent footage moved beyond passive voyeurism and expressed outrage that the father and son had been cleared of any wrongdoing. Only after this national outcry sparked activism were the McMichaels arrested and charged with murder.

Commentators likened the disturbing footage to the vigilante killing of 17-year-old Trayvon Martin in Sanford, Florida, in 2012, and many people—including Ahmaud’s grieving father, Gregory Arbery, attorney Benjamin Crump and Atlanta mayor Keisha Lance Bottoms—characterized the killing as yet another modern-day lynching.

Horrified observers’ quick invocation of the history of lynching shows increasing national awareness of this country’s history of anti-black terrorism. As lawyers working for Equal Justice Initiative (EJI), an organization that for more than a decade has been researching, documenting and encouraging public engagement with the history of lynching, we are glad to see that connection. But rather than asking whether we should or shouldn’t call Ahmaud Arbery’s 21st Century killing a lynching, we must go further to recognize how his death, which invokes a similar history, can and must lead to a different outcome.

Vigilantism and the Assumption of Guilt

Like many lynching victims of generations past, Arbery was a black man targeted by white men who, though not police, felt empowered to wield weapons, demand answers and then kill him when he did not submit.

“[The South's] police system,” scholar W.E.B. Du Bois wrote in 1903, “was arranged to deal with Blacks alone, and tacitly assumed that every white man was ipso facto a member of that police.”

Even after death, Arbery was denied the status of victim, and his killers were shielded from being treated as suspects. As during the lynching era, the mere claim that the dead black man deserved what he got was enough to satisfy the authorities and absolve the undisputed killers. In hundreds of the lynchings EJI has documented, the victims’ names are not known because newspaper reports did not bother to investigate even that deeply.

In fact, victims of lynching and those who mourn them have carried the burden of disproving their unproven guilt. Most recently, surveillance video showing Arbery entering a home construction site the day he was killed has been published by news outlets even though the owner of the home has confirmed no crime was committed, and no Georgia law authorizes armed pursuit as a response to trespassing

More than 150 years since Reconstruction, this country continues to rely on narratives that dehumanize people of color suspected of crimes to legitimate their inhumane treatment—whether through state sanctioned racial violence, forced labor during incarceration, or deadly conditions of confinement. White supremacy projects criminality onto black people making even quotidian activities—like traveling by foot through a residential neighborhood or walking to the convenience store for snacks—a deadly risk for black people.

A key element of lynching terrorism was how each act sent a brutal message that any person of color was vulnerable to unchecked racial violence. Federal authorities repeatedly failed to pass anti-lynching legislation during the time it was needed most. While white mobs proudly posed for photographs beneath hanging black corpses and mailed incriminating evidence as postcards through the U.S. mail, very few white people were convicted of murder for lynching a black person during this period. Of all lynchings committed after 1900, only 1 percent resulted in a lyncher being convicted of any crime.

In her 1892 pamphlet, “Southern Horrors,” investigative journalist Ida B. Wells-Barnett wrote that accountability for racial violence “cannot and will not be done unless a healthy public sentiment demands and sustains such action.”

And yet a fundamental difference between lynching-era killings and the death of Arbery is our ability to safely mobilize. The politics of fear and anger have not died out. But racial terror lynching is defined by the public violence against black people and the collective official inaction that allows that violence to go unpunished. There is no wisdom in declaring a modern-day killing a lynching without this context. As EJI Director Bryan Stevenson noted in a recent interview, “We had lynchings in this country throughout the 20th Century, and no one did anything about them. That label didn’t actually motivate authorities to be responsive.”

Instead of focusing on a label, we can and must ensure that official inaction is not accepted. We must also demand official accountability for Breonna Taylor, a sleeping black woman killed in a wrongful Louisville, Kentucky, police raid of her home last month, and Dameon Shepherd, the black North Carolina high school student confronted by an armed white mob at his home earlier this month. Demands for both accountability and justice breathe life into national movements.

Like many residents of Brunswick, Georgia, where the public landscape features no memorialization of local lynching history, Ahmaud Arbery likely died not knowing the names Wesley Lewis or Henry Jackson. He could not have known the terrible way his death would echo that past. But in recognizing how his and other stories reflect features of the lynching era, we must ensure that our telling challenges the roots of white supremacy and propels us toward justice.

Jennifer Rae Taylor and Kayla Vinson are attorneys at the Equal Justice Initiative (EJI) in Montgomery, Alabama. For more than a decade, EJI has been researching, documenting, and encouraging public engagement with the history of lynching, through research reports, community memorialization efforts, and the 2018 opening of the National Memorial for Peace and Justice.