First Came The Pandemic, Then Came the Raw Sewage

As if coronavirus wasn’t bad enough, plumbing problems are making life in some Texas prisons even more miserable.

By Joseph Neff and Keri Blakinger
Coverage of the COVID-19 pandemic, criminal justice and immigration.

The toilets are overflowing—again. As if crowded conditions inside prisons were not enough of a challenge during a pandemic, some Texas prisoners are also facing a familiar foe: the system’s historically-bad plumbing.

At least two large prisons in recent weeks suffered severe water shortages that left thousands of people unable to wash hands, a key step to fight the coronavirus, and that also prevented some prisoners from flushing toilets. In a prison holding as many as 2,200 men near the New Mexico border, some prisoners had to defecate for days without being able to flush their feces away, an employee said.

“They were pooping on top of their own poop,” said the employee at the Preston E. Smith Unit in Lamesa, who spoke with The Marshall Project on the condition of anonymity for fear of retaliation. When water was restored and prisoners were finally able to flush, sewage pipes burst, spilling inside part of the prison, according to the employee. A spokesman for the Texas Department of Criminal Justice confirmed a six-day water shortage at that prison, but denied assertions of sewage problems. He also said the agency was appropriately responding to water and plumbing emergencies.

But the incident there, and water and plumbing problems at other locations since the pandemic began, are once more highlighting the sanitary challenges of Texas’ aging prisons. Many were built in remote areas in this enormous state, where water and sewage service relies on pipes that extend hundreds of miles and can be hard to repair quickly when they break. 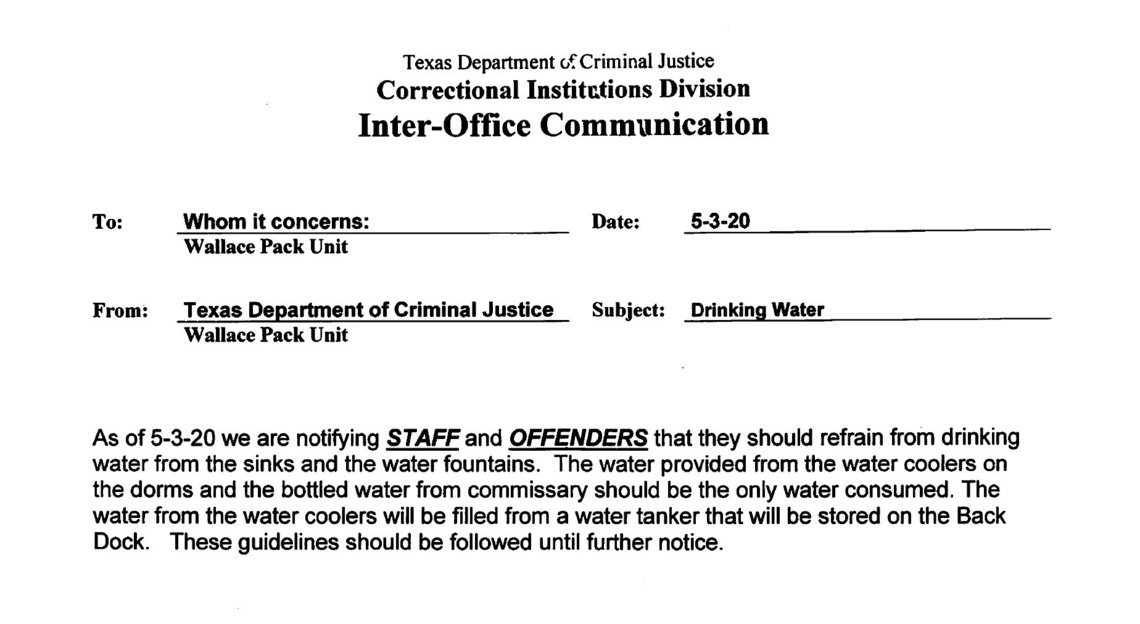 A note sent by the Texas Department of Criminal Justice warned staff members and prisoners at the Wallace Pack Unit not to drink the water from the sinks and water fountains.

For years, Texas prisoners have raised concerns about water outages and sewage back-ups, sending regular complaints to their families on the outside and to news reporters. Their clamor has intensified during the pandemic, with complaints of water or sewage problems in prisons in Texarkana, East Texas and near Houston since mid-April, according to prisoners or their relatives and lawyers.

“It’s a mess with these facilities,” said Lance Lowry, a Huntsville-area officer who is vice president of the Correctional Officers Association of Texas. The recent plumbing problems came as no surprise, he said. “Our prison system is pretty much held together by duct tape and baling wire.”

The problems are hardly new. In 2013, the 2,100-person Connally Unit, 60 miles southeast of San Antonio, temporarily shut down after staffing shortages and water problems—though the prison system at the time denied the water issue as a reason for the closure, according to Texas Monthly.

The system’s weakness resurfaced in a big way during Hurricane Harvey, when some prisoners elsewhere said they found themselves knee-deep in overflowing toilet water contaminated with waste. Several news reports at the time cited prisoners complaining about not getting enough access to portable toilets. The prison system then denied the allegations. Many of the state’s prisons are aging, and the cost of upkeep could be prohibitive in the coming years, Lowry said.

“Texas is either going to have to put a sizable amount of money into updating these facilities, build new facilities to replace these old ones, or reduce our offender population,” he said. “And going into a recession, there’s probably only going to be one of those that is a viable choice. The train wreck is coming.”

The crisis at the Smith prison in West Texas began May 17 following a rupture two days earlier on the pipeline that brings water from 260 miles away in the Panhandle, cutting the supply to both the prison and the city of Lamesa by more than 70 percent. Prison officials began turning water off in bathrooms and cells, according to the staffer who described the conditions. Toilets began to fill.

On May 20, as prison officials turned water on in the J2 unit, sewage pipes burst and flooded part of the prison, the employee said. Prisoners showed up the next day to work at the laundry, kitchen, maintenance and mattress factory wearing waste-soaked clothes they had used to clean flooded cells, the officer said: “They smelled overwhelmingly of urine and feces.”

Jeremy Desel, the chief spokesman for the Texas prison system, said the Smith prison had no sanitation or hygiene problems during the six days it was under water conservation measures. “There was no, zero, nada sewage or sewer line issue at the Smith Unit, period, none,” Desel said.

A West Texas man said his son, who is incarcerated at that prison, had complained about the days-long water outage and was all but resigned to poor conditions in the prison. “It’s just kind of an everyday occurrence and he’s at the point in his prison life where he doesn’t let things stress him out too much,” the man said. He asked that neither he nor his son be named for fear of retaliation from prison officials.

Lamesa Mayor Josh Stevens said he doesn’t know what happened inside the Smith prison during the water emergency, but that prison officials were told in advance that the water line would shut for repairs. Stevens said the city reduced the flow to the prison further on May 19, because the prison was consuming too much water during the repairs.

Stevens said the city returned full water to the prison three days later, and the water emergency was lifted May 23.

Desel, the prison spokesman, disputed the mayor’s account, saying the prison abided by the city’s limit and brought in four tanker trucks of water and 42 portable toilets for prisoners. Desel said the city reduced the water flow on May 19 because of the city’s own mechanical problems. There were no showers in the prison that week, he said, but the prison continued to flush toilets on a rolling basis every two hours, and brought in clean linens and clothes daily from a prison laundry in Lubbock.

“The masks were laundered and replaced every day,” Desel said of cloth face masks distributed to reduce coronavirus transmission. “There were no sewage issues.”

Other problems with water and plumbing have surfaced elsewhere during the pandemic, which has sickened more than 4,900 Texas prisoners and killed 36. In mid-April, a prisoner at the Telford Unit in Texarkana wrote a letter to a friend complaining about sanitation problems there during the early days of the outbreak.

“As I’m writing this (6:20 p.m.), 2-section day room is flooded with sewage water,” he wrote in the letter, obtained by The Marshall Project. “Nothing we can do but pick your shit up off the floor. They ain’t gonna let you out that cell for nothing.”

A few weeks later, near the beginning of May, officials at the Pack Unit in East Texas put up a notice advising prisoners not to drink from the sinks, and instead trucked in water for a few days, according to attorney Scott Medlock. The Austin-based lawyer has repeatedly sued the state prison system over bad conditions and lack of medical care, and is one of several lawyers who represents Pack Unit prisoners who’ve accused officials of failing to adequately protect them during the pandemic.

“We have no idea what the problem was,” he said in reference to the water issues, but said prisoners worried about spreading germs when one person pushed a water barrel through the unit for distribution.

Then, less than two weeks ago, the century-old Darrington Unit, south of Houston, began having plumbing problems as well. A prisoner there said the problems began with an all-day water outage, with water back on that night. “Then same thing next day, for about 3 or 4 days,” he wrote to The Marshall Project. “Every day since then we have only had half pressure.”

There’s typically no warning before the water goes out, and no indication as to when or whether it’s safe to drink, said the prisoner, who asked not to be named. This week, he said, the water outages have recurred.

“I don't mean to be graphic, but at this point is when we are forced to choose between defecating in a chip bag and putting it into a paper johnnie sack, or leaving it in the toilet to stew in the heat all day,” he wrote. “If you've ever had to live in a cell for 3 days with a toilet full of feces, the plastic bag option begins to seem reasonable.”