Shining a Light on Life Behind Bars

“The Writing on the Wall” art installation lets incarcerated people speak for themselves.

As COVID-19 continues to spread across the globe, people in prisons and jails are among the most vulnerable. But rarely do they have the opportunity to share their perspectives with people on the outside.

A traveling art installation called “The Writing on the Wall” aims to change that. Conceived by Baz Dreisinger, founder and executive director of the Incarceration Nations Network, and conceptual artist Hank Willis Thomas, the exhibit projects writings by people who are or once were in prison onto buildings and landscapes. On Thursday night, the projections illuminated the exterior walls of the Department of Justice and the now-closed Newseum in Washington, D.C.

“There is so much being said about people who are incarcerated, and you don't hear enough from them,” Thomas said. 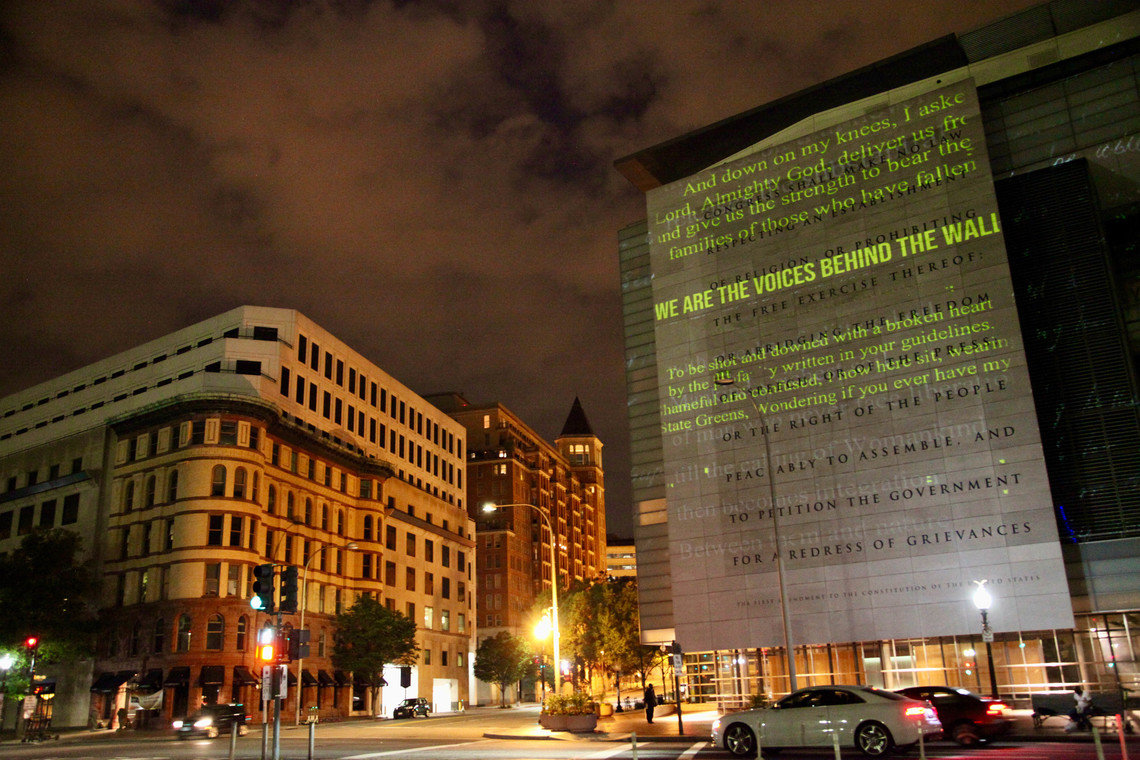 A projection on the former Newseum building in Washington, D.C. “Our priority was how can we keep this installation going, keep these words alive in this moment where they're needed the most?” said Baz Dreisinger, who helped conceive the exhibit.

One of the pieces featured in Washington, D.C., was part of an unpublished graphic novel written by Matthew Wilson, also a curator for “The Writing on the Wall,” while he was incarcerated at Otisville Correctional Facility in New York in 2013. The story follows a young man who was orphaned and feels betrayed by his country, and a mercenary who took him in.

“My hopes are to have individuals think about the humanity that's pretty much forgotten about,” Wilson said, “to be mindful of how they address these individuals, like myself, who are returning back into society.” 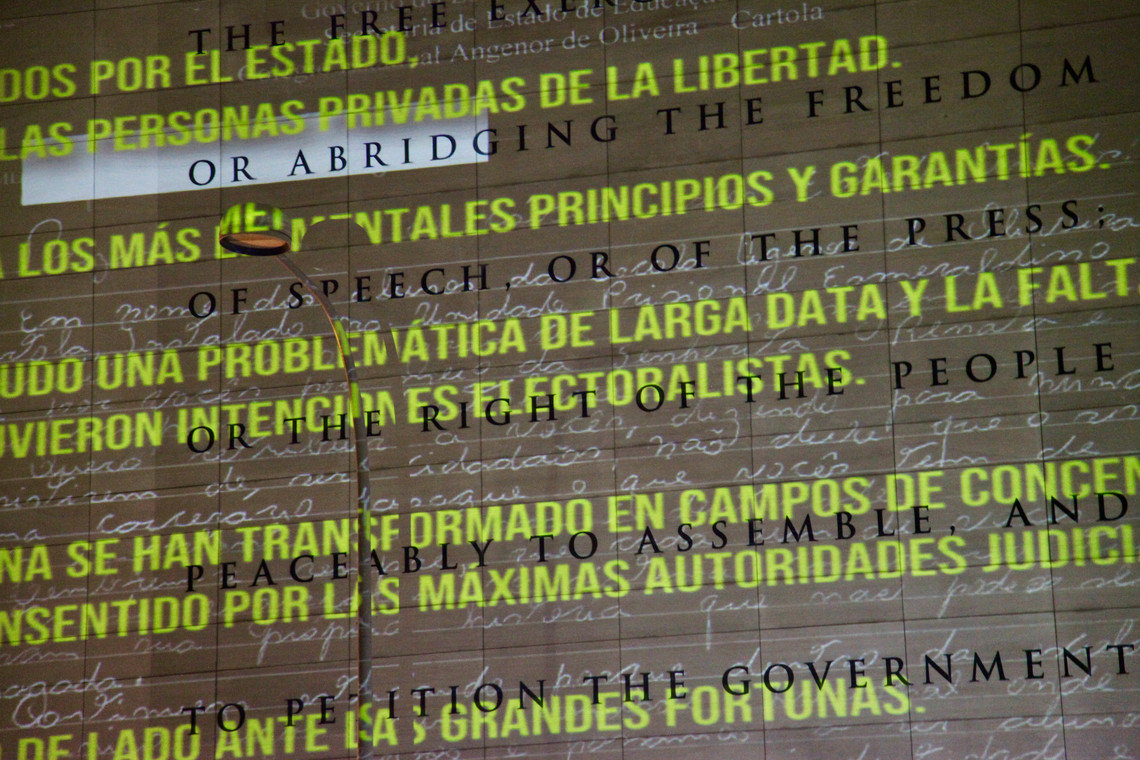 Projections include writings from incarcerated people around the world in places like the United Kingdom, Uganda, Argentina and Brazil.

The installation has been an ongoing effort with the nonprofit architecture firm MASS Design Group, art-activist collective The Illuminator and the production team Openbox. But before the pandemic, it took a different form: as an immersive, in-person experience that traveled to the High Line Park in New York City, as well as Detroit, New Orleans, Philadelphia and Miami. When the pandemic hit, the organizers reinvented the exhibit as a series of large-scale projections.

The new version debuted in May in New York City with projections on the Brooklyn Bridge, Manhattan Detention Complex and the New York State Supreme Court building in Manhattan. Dreisinger said she and Thomas chose the city, the global epicenter of the pandemic, because they wanted “to be responsive to that and say we need to push for the release of people from prison, push for all kinds of radical changes that need to happen in the justice system in this moment.” 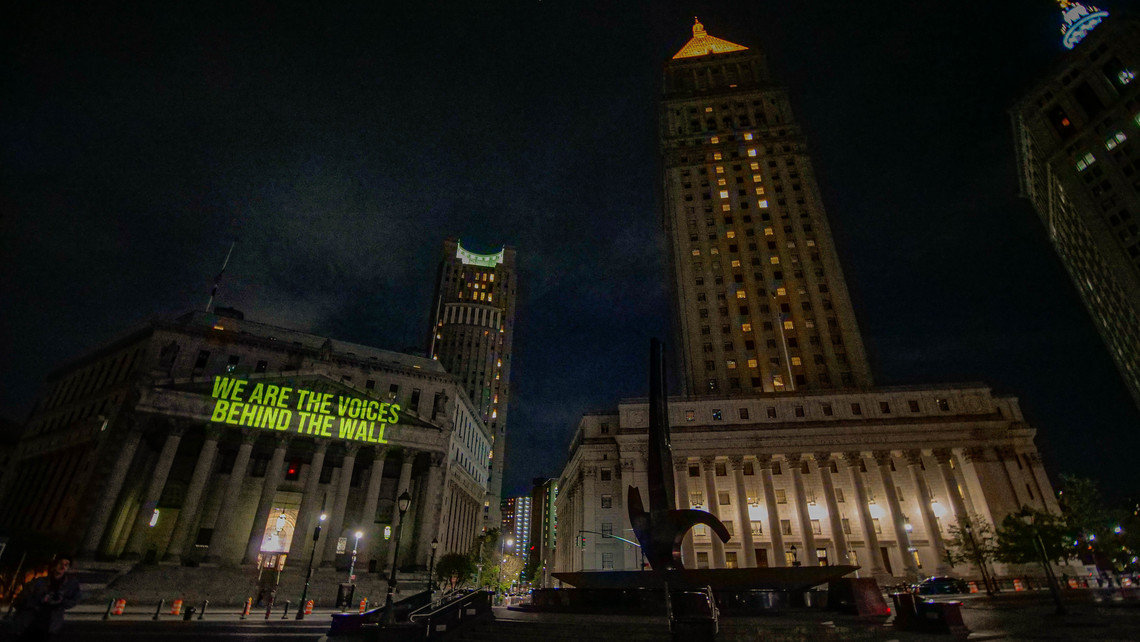 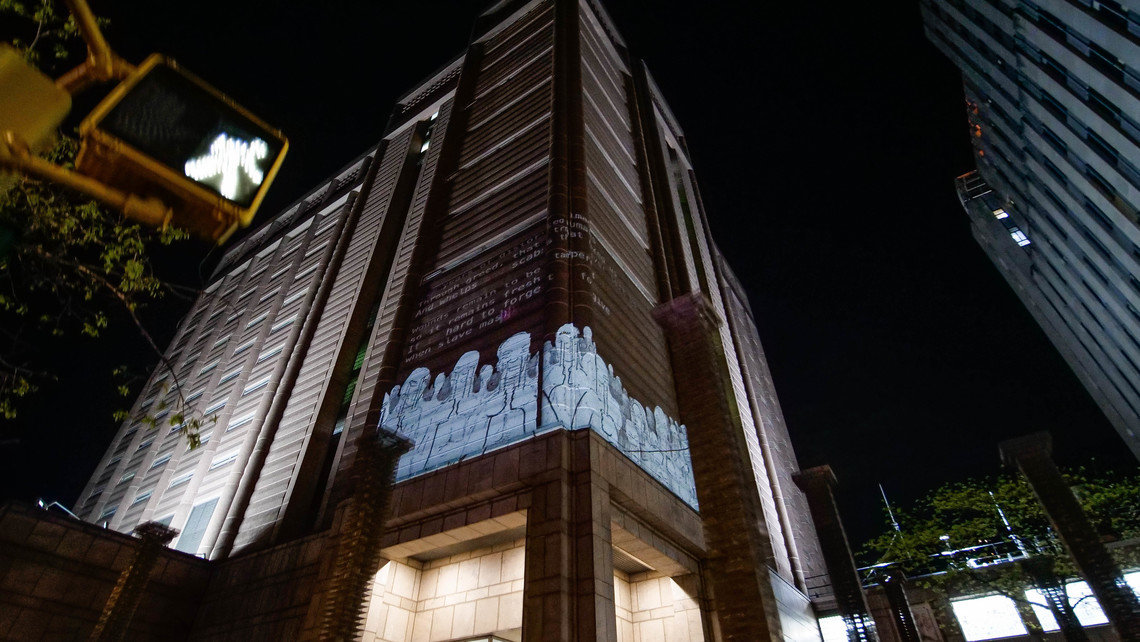 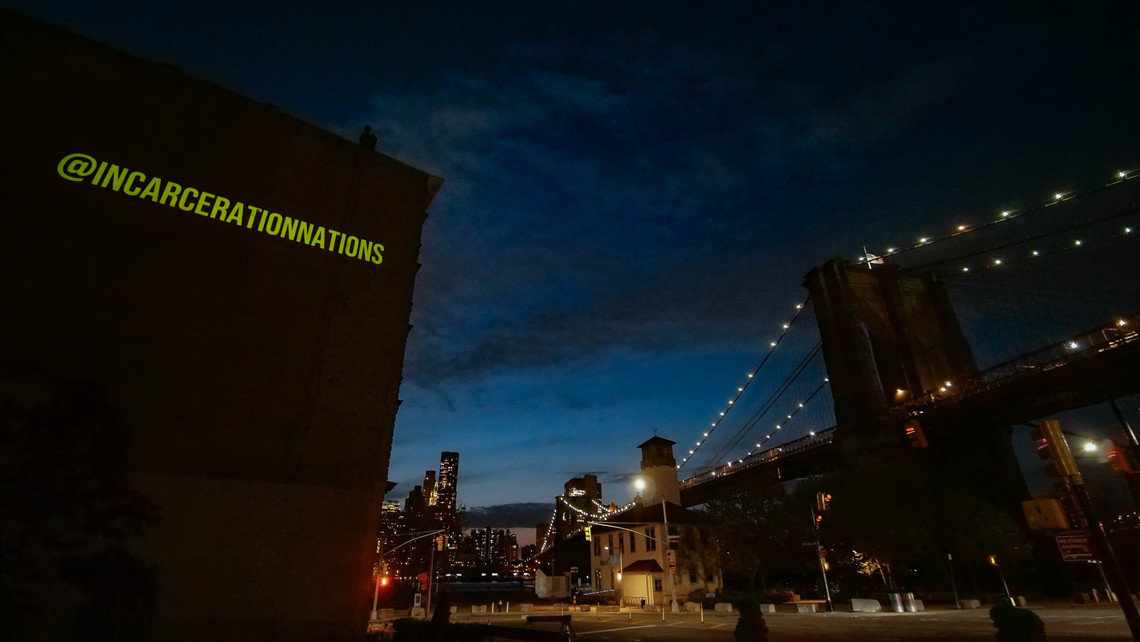 Counter clockwise from top, images and writings were projected on the New York State Supreme Court building in Manhattan, the Manhattan Detention Complex and near the Brooklyn Bridge on May 10, 2020. Chemistry Creative

The virus has infected thousands of people in correctional facilities across the U.S. Incarcerated people have little chance of social distancing and have unreliable access to hygiene products and medical care.

“The Writing on the Wall” features writing in English and Spanish and from incarcerated people around the world, including the United Kingdom, Argentina, Uganda and Brazil. The organizers plan to take the exhibit abroad to cities including Mexico City and London. At every stop, they coordinate the installation with local justice reform organizations and formerly incarcerated community leaders. In Washington, D.C., the group collaborated with the Office of the Attorney General’s Cure the Streets and the Restorative Justice programs, as well as the WIRE, an organization of formerly incarcerated women.

Its next stop will be Ohio on June 19—or Juneteenth, which marks the anniversary of when enslaved people in Galveston, Texas, first learned of their freedom in 1865. Dreisinger said they are still figuring out the exact location but wanted to show the exhibit in Ohio because of how hard the pandemic has hit prisons there, where more than 4,800 prisoners have been infected and 76 have died.

“We wanted to do it on Juneteenth for the obvious significance of the direct correlation between slavery and mass incarceration,” she said, “and the idea that emancipation has not fully happened yet.”

Adria Watson Adria Watson was a summer intern at The Marshall Project. She graduated from California State University, Sacramento in May with a degree in Journalism. Previously, she was a part-time reporter and intern at CalMatters and has had work published in The Sacramento Bee.