What Are Cops Really Thinking When Routine Arrests Turn Violent?

“You have to use a lot of force, or you are going to die.” 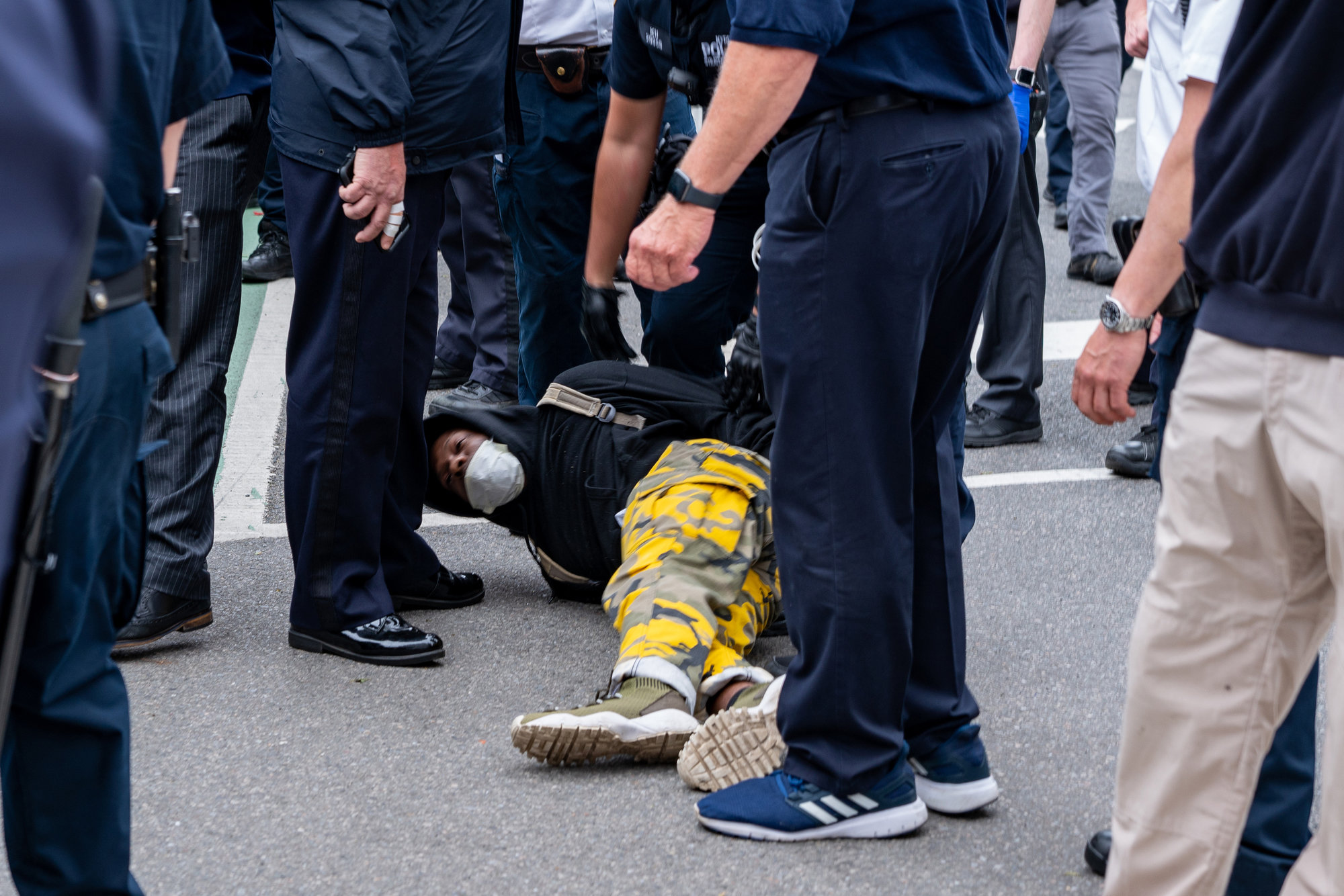 A demonstrator was arrested during a protest against police brutality in May in New York. David Dee Delgado
By Simone Weichselbaum and Jamiles Lartey
Data reporting by Humera Lodhi

Why do they do it? Cops have been caught on video, over and over, assaulting Black Americans — bruising their bodies and breaking their bones during routine encounters that escalated. What makes officers engage in rough arrest tactics that seem unnecessarily brutal?

Paul Huebl, a 12-year veteran of the Chicago Police Department who now makes a living as a private investigator aiding cops accused of excessive force, says it is a simple matter of control. Police are taught to dominate a situation and get someone in handcuffs as soon as tensions start to flare. If they don’t, they risk ending up in a bodybag.

“If you are gonna use force, you have to use a lot of force, or you are going to die,” Hubel said. “You can’t be a namby pamby.”

Arrests turn violent, Huebl told The Marshall Project, when people ignore officers’ commands and argue their innocence. “Don’t fight the police,” is his solution. “When are these idiots gonna learn that you can’t do this shit?”

Not everyone is so willing to blame the victims or endorse maximum force. But there is a strong consensus among cops, their defense lawyers, prosecutors and law enforcement researchers that Huebl’s diagnosis is correct: police culture is built on a code of asserting dominance above all else.

This ideology of street policing has persisted despite public outcry over the deaths like that of George Floyd and decades of reforms aimed at transforming police from combatants into “guardians.”

“I still have guys who have the warrior mentality,” said Mike Chitwood, the sheriff of Volusia County, Florida. Speaking, at a recent town hall hosted by the Police Executive Research Forum, a Washington D.C. think-tank, he said, “We are working to try to change that. And it’s a battle every day to do that.”

This ethos of complete control is reinforced by recruiting, training, and strong unions; in many states it is protected by law.

Courts tend to rule in the favor of cops who say they had to resort to physical violence during an arrest. In several states a person can be charged with resisting arrest even if prosecutors say cops had no legal authority to detain the person in the first place. Only a handful of states, including New York, Washington and Pennsylvania, specifically ban such prosecutions.

“When I ask a cop, ‘Why did you have to get hands-on with the guy?’ they say, ‘Don’t resist and we don’t have to fight,’ ” said Timothy M. Grace, a lawyer for the Chicago police union. Grace pointed to an 1981 Illinois appellate court ruling that said a suburban Chicago man could face charges for punching a cop and resisting arrest, even though officers didn’t have a warrant to enter his apartment. The man’s neighbors had complained he had been noisy.

“They have to use force that is reasonable in order to place on those cuffs,” Grace said. “They can’t walk away, that’s dereliction of duty.”

Brendan Shiller, a Chicago lawyer who has filed lawsuits against the city for excessive force, said he often sees this mindset in his cases. “This is the mentality when they go on the street. They're sending a message. This is all intentional and they believe this is righteous,” Schiller said. 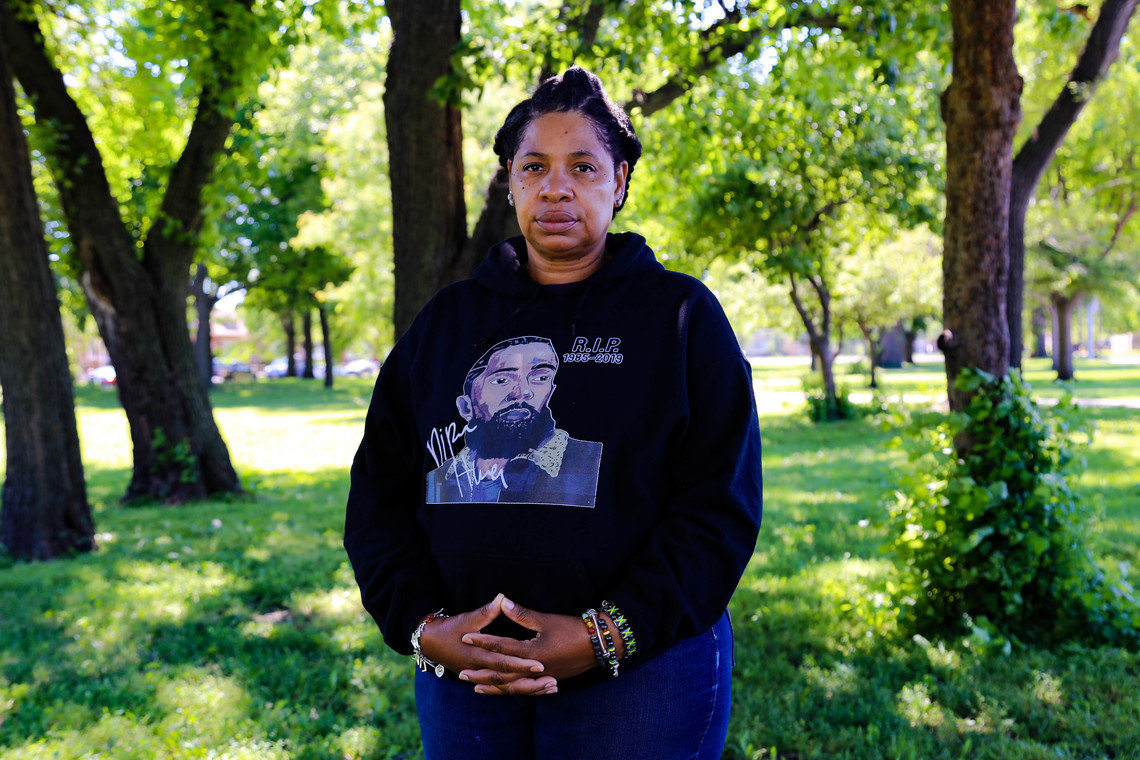 In 2014, a Chicago Police Department sergeant stopped Patasa Johnson on suspicion of drunk driving, and then beat her after taking her into custody.

Olivia Obineme for The Marshall Project

Patasa Johnson, who was represented by Schiller in a civil rights suit against the city, knows what it’s like to be on the receiving end of that mindset. Johnson’s case began in 2014 when an officer pulled her over on suspicion of drunk driving. In the police car en route to the station, Johnson insisted she was innocent. Minutes later, she was handcuffed and crouched on the interrogation room floor as Sgt. George Granias unleashed a barrage of blows to her head, chest and back.

Now 48 and a caregiver to the elderly, Johnson says she thanks God she was restrained by handcuffs. “The way he was beating on me, I know I would have gotten to a point where I probably would have swung back on the officer—and that would have led to me being dead,” Johnson said. She is convinced the beating was payback for her demand to know why she was being detained.

“That’s just the kind of person I am, I speak up when something isn’t right,” Johnson said. 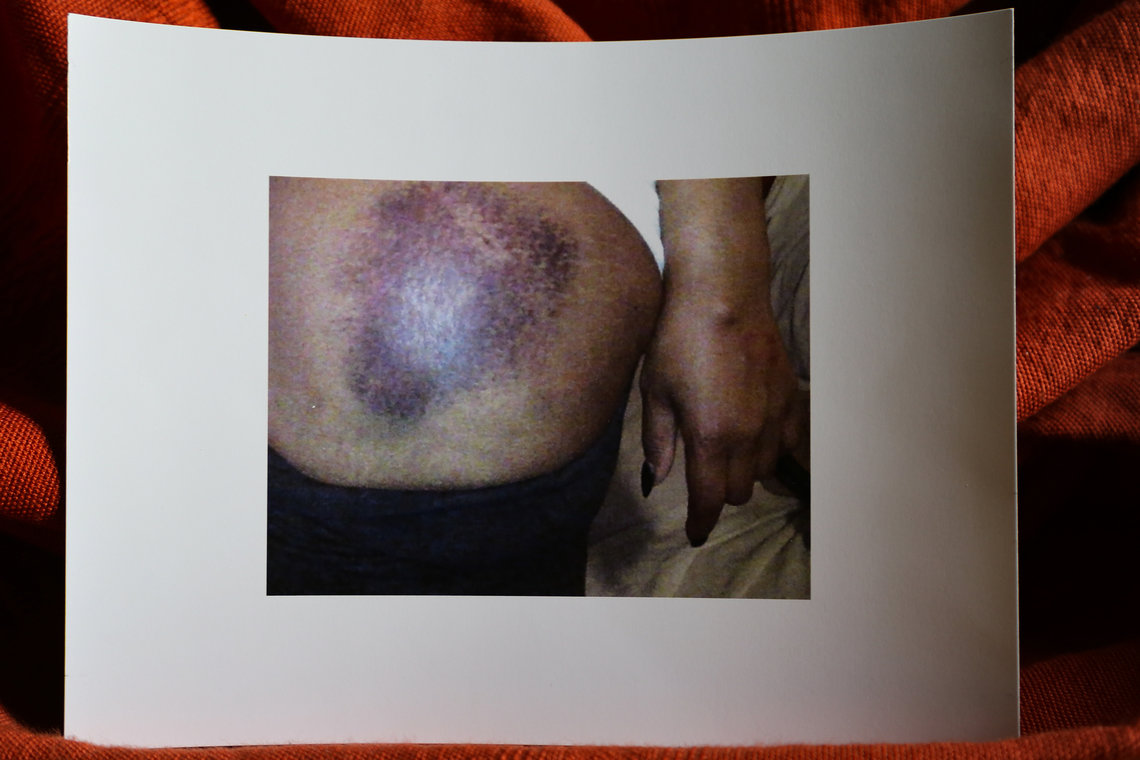 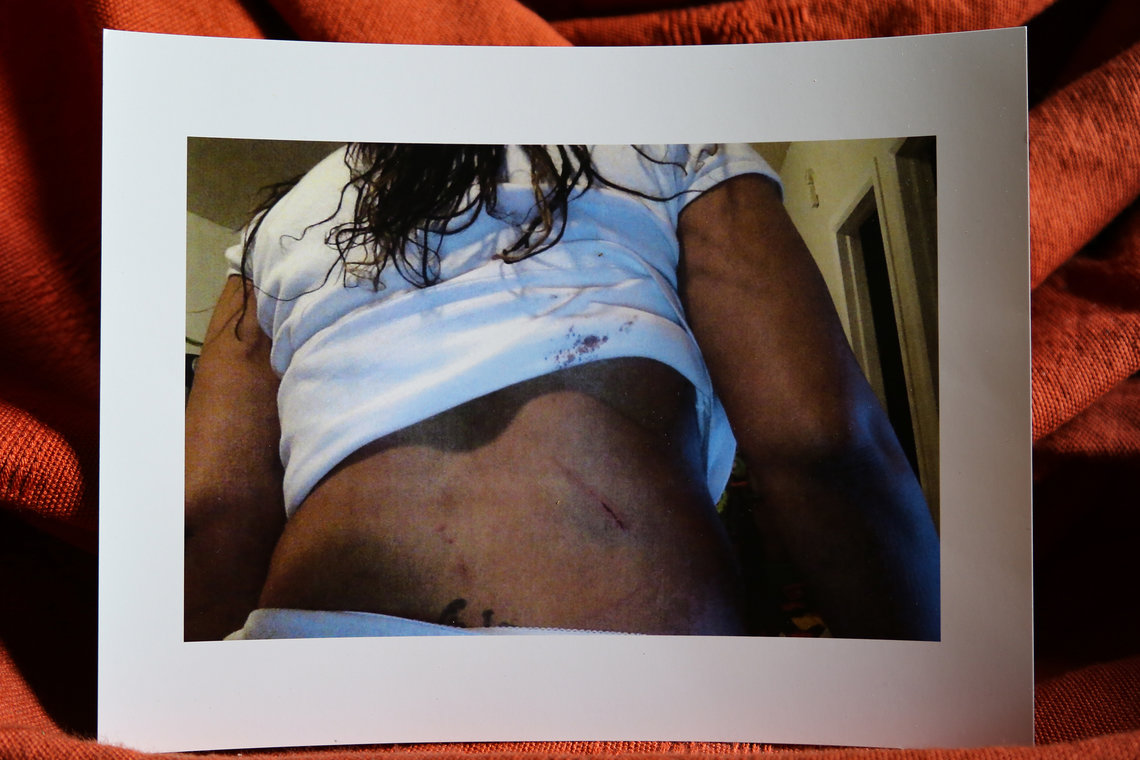 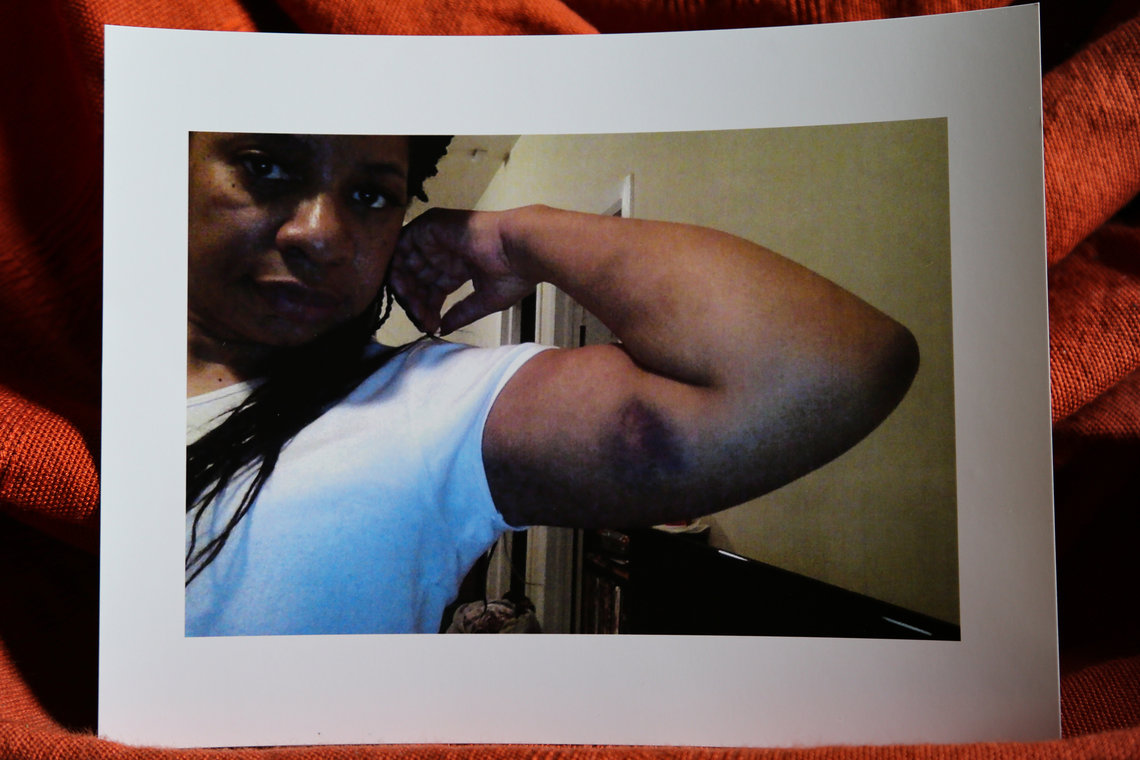 Images of some of the injuries Patasa Johnson suffered at the hands of a Chicago Police Department sergeant after the he arrested her. Olivia Obineme for The Marshall Project

More than 1,200 Chicagoans filed complaints in 2014 alleging police violence, including being shot, pepper sprayed, Tased or assaulted. The city dropped charges and later paid Johnson $185,000 to settle her civil rights suit, according to city documents. “I would rather him be fired,” she said.

The Chicago police department said Granias is still on the job but would not provide further comment. Since he joined the force in 1994, he has filed 72 “use of force” reports, more than 99.9 percent of officers in the city, says the Citizens Police Data Project, which tracks such filings. Granias did not respond to requests for comment.

Academics have spent decades researching why certain police officers tend to use excessive force, and which kinds of people are more likely to be on the receiving end of such aggression.

Economist Roland G. Fryer, Jr. analyzed 10 years of police stop-and-frisk data in New York City and found that even when cops report that people obeyed their orders, they were still assaulted by police. That was especially true of Black residents, who were 21 percent more likely than Whites to be held at gunpoint, shoved, pepper sprayed or batoned, according to Fryer, a professor currently on administrative leave from Harvard for sexual harassment.

“Even when we are fully compliant, we are more likely to be roughed up by the police,” said Fryer, who is Black. “And how many more times can you have your dignity taken away from you?”

Black residents tend to have more contacts with police than Whites, which means more opportunities for interactions to turn violent. In an examination of nearly 90,000 complaints filed over 13 years against the Chicago Police Department, the Marshall Project found that compared with White residents, Black residents reported eight times as many incidents of excessive force and other violent actions including using a Taser or pepper spray or discharging a weapon. Blacks make up about 30 percent of the city’s population; Whites account for about 49 percent.

Researchers have found similar trends in New York City and other metropolises. The statistics probably understate the problem. The vast majority of complaints go uninvestigated or are deemed unfounded, so many people elect not to pursue official grievances against police.

Fryer said that as police reform is once again in the spotlight, routine police interactions — like Patasa Johnson’s—need the same level of scrutiny as police killings: “We got to deal with these lower levels of uses of force, or we are never going to make progress on police and community relations. Never.”

“I think the problem is that cops—for a whole host of reasons in a racialized society—they see a Black person, particularly a Black male, as more likely to be dangerous than a White male,” he said. “Therefore they see that a greater level of force is needed.”

“And until we get at that, we aren’t going to get at this problem.”

Law enforcement leaders say part of their prescription to reverse destructive police culture is through recruitment. Some policing experts argue that diversifying the ranks reduces the chances of cops killing African-Americans. But traditional hiring preferences—including a solid credit score, citizenship status, a clean criminal record and military background—have disadvantaged Black and Hispanic applicants. And potential recruits of color may be repelled by evidence of systemic racism in the profession.

But experts warn de-escalation and other buzzword training is not an easy fix for ingrained patterns of behavior. Police administrators have to pay attention to how often disengaging from violence is taught and how supervisors enforce the philosophy.

That’s even more true for training that focuses on changing attitudes rather than teaching concrete skills like how to shoot a gun or write reports. What people believe and feel is actually a weak predictor of how they will behave in tense situations, said Phillip Atiba Goff, the CEO of the Center for Policing Equity, a think tank that works on issues of racial disparities in policing.

“If the goal is only hearts and minds, the result will be less than the kind of behavior change most want,” Goff said. “Doesn’t mean it can’t be part of the broader solution. But it shouldn’t be the only solution.”

Editor’s note: This article has been updated to reflect Fryer’s status at Harvard.