What Trump Really Means When He Tweets “LAW & ORDER!!!”

A brief history of a political dog whistle.

In speeches and tweets in recent months, during historic protests against police violence toward Black Americans, President Trump has been hammering a familiar three-word phrase that he hopes will energize his base and help him win the November election:

According to a new Wall Street Journal database that tracks the candidates’ public comments on a wide range of issues, Trump and Vice President Mike Pence have mentioned “law and order” on the stump more than 90 times this year, including seven from Trump in the first presidential debate on Sept. 29. The president even tweeted while hospitalized with COVID-19 earlier this week, “LAW & ORDER. VOTE!”

In the months since demonstrations arose over the deaths of George Floyd in Minneapolis, Breonna Taylor in Louisville and the shooting of Jacob Blake in Kenosha, Wisconsin, among other incidents of police violence, Trump has doubled down on this message, sending National Guard troops to Kenosha and federal agents into Portland, Oregon. “People of Portland, and other Democrat run cities, are disgusted,” he tweeted during ongoing unrest in August. “They want Law & Order!”

Trump certainly isn’t the first politician to wield “law and order” as a political cudgel against an opponent. And during Wednesday’s night’s vice presidential debate, viewers will likely hear more of the same from Pence. Indeed, we’ve been hearing the phrase from politicians in both parties—not to mention in the ubiquitous television franchise of the same name—for decades.

Former Vice President Joe Biden and his running-mate Sen. Kamala Harris—who spent six years as California’s attorney general—have seemed reluctant to push back against their opponents’ “tough on crime” message. Instead they have tempered their support for law enforcement with a softer tone. “I do not believe we have to choose between law and order and racial justice in America,” Biden said in a speech this week. “We can have both.”

But what exactly do Trump and other politicians mean when they talk about law and order? What are they saying—and not saying? To answer that question, we need to look at the phrase’s origins, which tell a grim story about race and justice in American politics.

The phrase was strategically lobbed into presidential politics for the first time in 1964, when candidate Barry Goldwater used it against the incumbent, Lyndon B. Johnson.

At the apex of the civil rights movement, as White voters saw the familiar social order attacked and upended, Goldwater and other conservative politicians needed a way to tap into these voters’ fears without appearing to talk about race, say political scientists and historians. “Law and order” was “a strategy for reaching suburban voters without having to say the ugly part out loud,” says Leah Wright-Rigueur, a political historian and public policy professor at Harvard University.

“Choose the way of this present administration and you have the way of mobs in the street, restrained only by the plea that they wait until after election time to ignite violence once again,” Goldwater said in a 1964 speech launching his campaign.

During the 1960s, violent crime in America increased. Prior to that decade, the federal government had rarely concerned itself with crime1, seeing it as an issue best left to the states.

According to a 2007 analysis by Vesla Weaver, the 1965 Law Enforcement Assistance Act—a three-year pilot to provide funding to states—was "the first federal program specifically for the purpose of helping states strengthen their law enforcement capabilities and only the second time...the federal government invested its own resources in the national crime problem." The first was The Juvenile Delinquency and Youth Offenses Control Act in 1961.

But opponents of the Civil Rights Act, stymied by the act’s passage, looked for another way to oppose Black civil rights without saying so. The act, which ended Jim Crow and outlawed job discrimination on the basis of race, was signed into law by Johnson in 1964 after a bitter battle in Congress.

It was no longer socially permissible for polite White people to say they opposed equal rights for Black Americans. Instead, they began “talking about the urban uprisings—Blacks’ response to political and economic exploitation—they start attaching it to street crime, to ordinary lawlessness,” says Vesla Weaver, a political scientist at Johns Hopkins University.

Playing upon stereotypes about Black criminality, a chorus of public figures—from senators to presidential candidates to FBI Director J. Edgar Hoover—loudly and effectively drew a line from civil disobedience to violence and anarchy on the streets. “I am greatly concerned that certain racial leaders are … suggesting that citizens need only obey the laws with which they agree,” said Hoover in 1965. “Such an attitude breeds disrespect for the law and even civil disorder and rioting.”

Goldwater lost the presidency by a landslide, but he succeeded in transforming “law and order” into a political issue that Johnson and subsequent Democratic presidential candidates have had to answer for—and he laid the groundwork for Richard Nixon’s narrow victory in 1968, which came as people in Watts and over 100 other cities protested police brutality and inequality.

In that race, running against Johnson’s incumbent Vice President Hubert Humphrey, Nixon famously pitted civil rights against safety by declaring that the “first civil right” was the “right to be free from violence.” 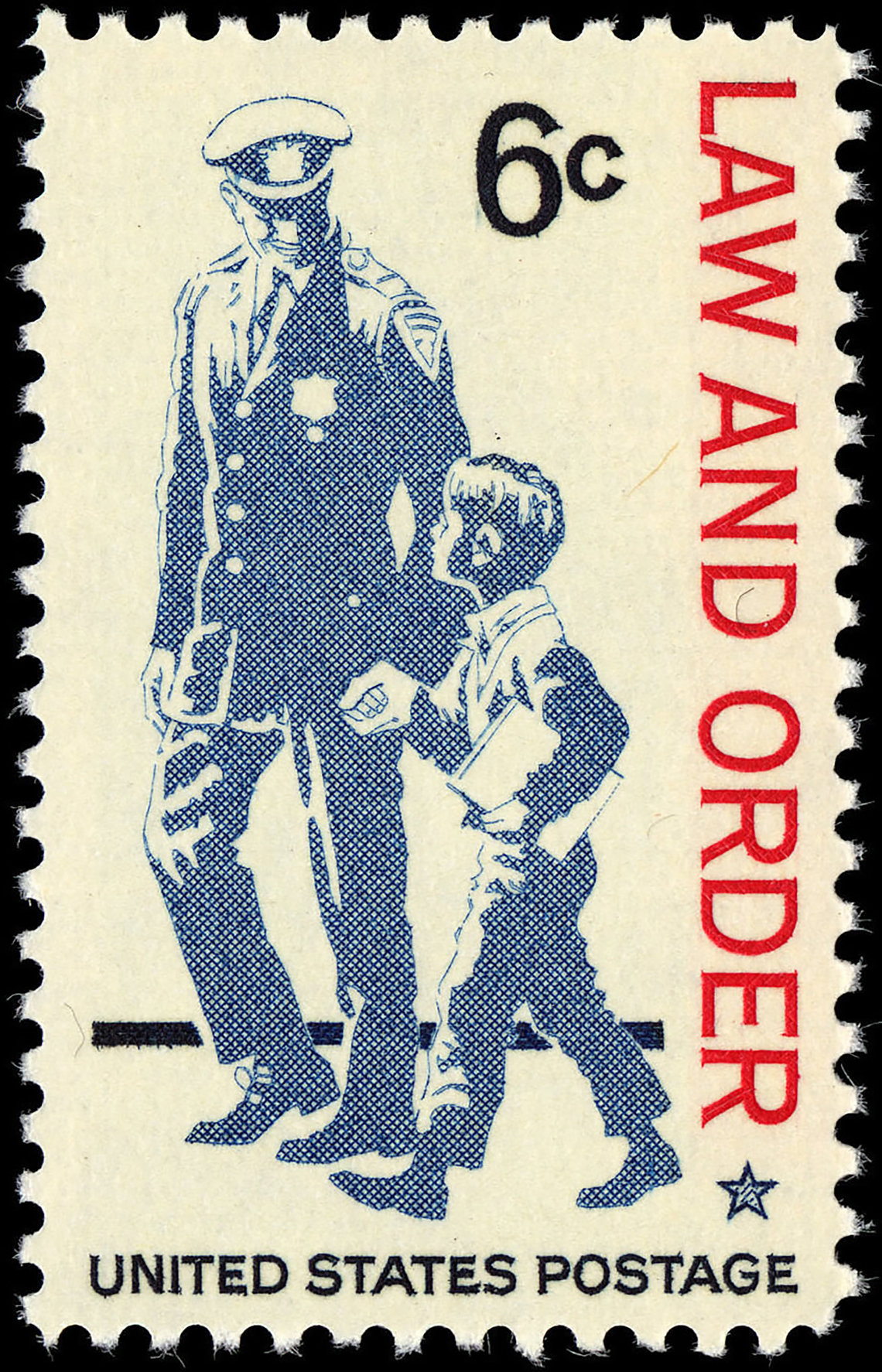 That’s as clear a line as Nixon drew publicly between law and order and race, but others made the link more explicit for him. In 1968, Time magazine quoted a supporter of George Wallace, the segregationist and former Alabama governor running as a third-party candidate against Nixon and Humphrey: “Y'all know about law and order,” the Wallace supporter said. “It's spelled n-i-g-g-e-r-s.”

John Ehrlichman, Nixon’s domestic-policy adviser (who went to prison for his role in the Watergate affair), later admitted to the journalist Dan Baum that Nixon’s criminalization of the Black community was a nakedly political tactic. “By getting the public to associate the hippies with marijuana and blacks with heroin, and then criminalizing both heavily, we could disrupt those communities,” Ehrlichman said in 2016. “We could arrest their leaders, raid their homes, break up their meetings and vilify them night after night on the evening news.”

“Law and order” reemerged in 1988, when a political action committee associated with then-Vice President George H. W. Bush ran a now-infamous television ad, lambasting Massachusetts Gov. Michael Dukakis for his state prisons’ furlough program, which “allowed murderers to have weekend passes.” Nevermind that all 50 states had furlough programs, the most generous of which was in the federal prison system under President Ronald Reagan and Bush. The ad centered on Willie Horton, a Black man who had been furloughed in Massachusetts and gone on to rape a white woman: the very archetype of Jim Crow’s worst fears.

This type of coded messaging only works when it remains implicit, political scientist Tali Mendelberg wrote in her book about the Willie Horton ad. Because White people don’t want to see themselves as racist, the message loses its power once it's revealed, Mendelberg has written.

Jesse Jackson publicly called the ad racist in 1988 (to which Bush strategist Lee Atwater—acting shocked—replied, “I don’t even think many people in the south know what race Willie Horton is”). But large minorities of American voters have long been able to see clearly the link between “law and order” and race.

At times during the last five years, Trump seems to have dispensed with the dog whistle—as when, in the 2015 speech announcing his candidacy, he referred to migrants from Mexico as rapists.

But lately he’s been drawing more heavily on the Goldwater and Nixon playbook, weaving lawlessness and race together with the largely peaceful protests against police brutality, without ever referencing the Black community explicitly. “If I don’t win,” he Tweeted last month, “America’s Suburbs will be OVERRUN with Low Income Projects, Anarchists, Agitators, Looters and, of course, ‘Friendly Protesters.’”

The issue is indeed on voters’ minds: In two separate polls this fall, large majorities of voters said “law and order” is a serious problem. But in interviews, several scholars and strategists expressed skepticism that this could be a winning issue for Trump.

“For a majority of voters, Biden is the responsible moderate voice on law and order,” said Michael Flamm, a historian who studies modern American politics at Ohio Wesleyan. “There’s no polling out there to suggest the law and order issue is cutting for Trump.” This is especially true because this message from an incumbent president reads as a rebuke of his own presidency, argued Princeton professor Kevin Kruse.

Republican strategist Matt Terrill agrees that Trump will lose if this election becomes a referendum on his first term—and that his hard-line rhetoric is a liability now. “For the Trump campaign to have a path to victory, he needs to demonstrate that he can not only lead on law and order, but he can also be that healing presence for the country—the candidate that can lead on race relations,” Terrill said. “You’re seeing the Biden-Harris campaign talking about the importance of unity, bringing the country together.”

Trump seemed to brag about his strategy on Fox News in September, when he told anchor Martha MacCallum, “They all tell me, even my people, my very brilliant consultants who I don't listen to too much … ‘Sir, please don't say law and order. It's too tough.’”

Biden’s position has softened considerably since the tough-on-crime ‘90s, when it was he who positioned himself as a “law and order” politician. He helped author the now-controversial ‘94 crime bill, which critics blame for contributing to mass incarceration, and in his rhetoric back then, he tried to act tougher than Republicans. “Every time Richard Nixon, when he was running in 1972, would say, ‘Law and order,’ the Democratic match or response was, ‘Law and order with justice’—whatever that meant,” Biden said in a 1994 speech on the Senate floor. “And I would say, ‘Lock the S.O.B.s up.’”

Yet at the first presidential debate, after Trump repeatedly pressed Biden on whether he supported “law and order,” Biden finally answered: “law and order with justice, where people get treated fairly.”