U.S. Customs and Border Protection carried out almost half a million child detentions during the Trump administration, data shows. More kids were held for 72 hours or more. 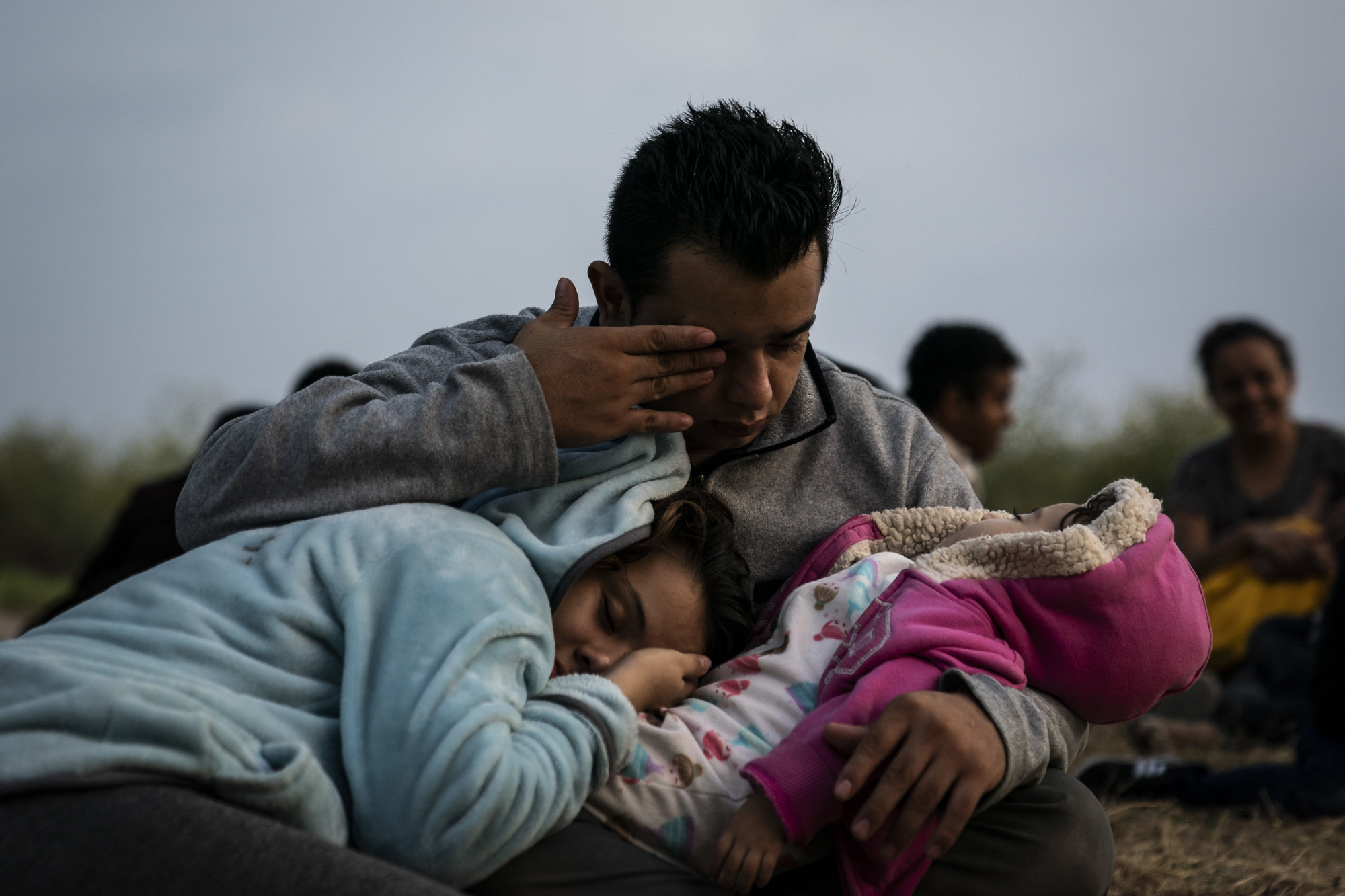 Families wait to be searched and loaded into transport vans taking them to the U.S. Border Patrol McAllen Station after they were caught in a group of immigrants that illegally crossed into the United States from Mexico in May of 2019, in Los Ebanos, Texas. Jabin Botsford/The Washington Post, via Getty Images
By Anna Flagg and Andrew Rodriguez Calderón

When U.S. Customs and Border Protection holds migrant children in custody, the child’s detention is supposed to be safe and short. That’s true whether the child is with a parent or without one.

But new data shows that over the last four years, detention times lengthened as the number of children held at the border soared to almost half a million. The detentions, which include both unaccompanied children and children with their families, peaked last year at over 300,000, with 40 percent held longer than the 72-hour limit set by a patchwork of legislation and a court settlement.

“The government regularly violated the 72-hour rule,” said Dr. Bill O. Hing, a University of San Francisco law professor and immigration lawyer who was part of an inspection group touring border stations in the summer of 2019 at the height of the crisis. Hing said he witnessed minors being held for increasingly long times in unsafe facilities designed to hold adults, not children and babies.

U.S. Customs and Border Protection carried out thousands of child detentions a day, a total of almost half a million in the last four years, with a growing number held 72 hours or more. Detentions have since fallen to nearly none, as the administration expels migrants citing public health concerns.

“72 hours in a cage with concrete floors and freezing temperatures and terrible conditions is 72 hours too many for—honestly in my view, for anyone,” said Rep. Pramila Jayapal, D-Washington and vice-chair of the House Judiciary Subcommittee on Immigration and Citizenship. “But particularly for children, regardless of if they're with their families or unaccompanied.”

An undocumented migrant child’s path into the U.S. often begins with getting booked into a Border Patrol station somewhere along the border. Customs and Border Protection then transfers children traveling without a parent to the Office of Refugee Resettlement—which reports to a different agency, the Department of Health and Human Services. The staff there works to place them with appropriate family members or other sponsors. Many children traveling with family get transferred to ICE family detention facilities, where they are either released pending hearings or wait to be processed.

For unaccompanied children, a legal 72-hour limit is set on their initial custody in Customs and Border Protection by the 2008 Trafficking Victims Protection Reauthorization Act. For children who arrive with family members, the same limit is technically required by a 1997 settlement agreement known as Flores—unless there is an influx of minors, defined at the time as 130 children at the border. With the U.S. today routinely detaining thousands of children on a given day, the 72-hour Flores protection for children arriving with parents has not applied for years.

Regardless, together these documents require the federal government to provide basic standards of care for all children—like hot meals, fresh water, clean clothes and a quick exit from holding facilities into the care of qualified sponsors.

A series of policy shifts by the Trump administration have made these obligations harder to meet. In early 2018, the federal government increased vetting requirements for potential sponsors, and required more information sharing about sponsors with ICE. As a result, it took longer and longer to place unaccompanied children with appropriate sponsors, and to find sponsors—some of whom might be undocumented themselves—willing to risk coming forward to claim them. For children who arrived with a parent, a crackdown on who qualifies for asylum on the basis of credible fear of domestic violence, gangs and other threats led to high rates of denial, leaving these children stuck in ICE family detention centers with their parents.

Along with a host of other immigration policies—including child separation and restrictions on immigration judges’ authority to handle caseloads—these steps have had a cascading effect, clogging up nearly every part of the immigration system.

With a growing number of children seeking refuge in the U.S., the policies led to a pile-up of children in border detention centers that were never designed to care for them.

Over the course of the administration larger and larger numbers of children were being held in custody at the border, and they spent longer times there. At its peak in 2019, 40 percent of child detentions were 72 hours or longer.

“The back-ups at CBP (Customs and Border Protection) in 2019 should have been preventable,” said Mark Greenberg, a former Acting Assistant Secretary of Health and Human Services, where he oversaw the office that provides care for unaccompanied minors at the border. “The surge didn’t happen overnight, and there were clear warning signs about the need to take action earlier to prevent it.”

At the height of the crisis in 2019, Congress passed a bill releasing $4.6 billion in emergency funds to federal agencies handling migrants. The measure passed over the objections of some lawmakers who saw it as further support for the harsh immigration policies that had contributed to the crisis in the first place.

“[The administration] was glad there was a surge,” said Peter Schey, an immigration lawyer who leads litigation efforts for the Flores agreement. “[They were] happy to pick up another billion dollars in federal taxpayers’ money to engage in enforcement, most of it targeted against children.”

Jessica Vaughan, director of policy studies at the Center for Immigration Studies, a think tank that promotes greater restrictions on immigration, disagrees that the policies were designed to make the process difficult for children. She believes the vetting policies were created to protect migrant children from falling into the hands of unqualified sponsors.

“Your perspective on this issue depends on whether your priority is to get these kids out of custody and into the hands of sponsors as quickly as possible,” she said, “or if the welfare of the child is the priority, even if it means keeping them in CBP custody for longer.”

Vaughan said the policies were a response to claims that the Department of Health and Human Services was not properly vetting potential sponsors, endangering children by putting them in the hands of labor traffickers. “The additional screening was adopted out of concern for these kids,” she said.

The welfare of children in Border Patrol custody has been the subject of intense scrutiny. In 2019, the Department of Homeland Security’s own internal watchdog issued a report citing lengthy stays and overcrowding. The report described “limited access” to a change of clothes and hot meals, and children kept in “cells” for impermissible lengths of time.

These problems stretch back years. Under the Obama administration, reports of unsafe and unsanitary conditions began circulating as the immigration system struggled to accommodate rapidly growing numbers of migrants at the border. In 2014, almost 108,000 children arrived, more than double the previous year. There wasn’t enough space to house them all, so the Department of Homeland Security set up a makeshift holding facility using chain-link fencing inside an industrial warehouse. Since then, critics have decried the conditions as inhumane and called for improvements.

“The Trump administration knew they were adopting a growing system,” said Jennifer Podkul, vice president of policy at Kids in Need of Defense, a legal advocacy group. “But instead of developing proper standards of care, they kept kids detained for longer periods of time and separated them from their families.” 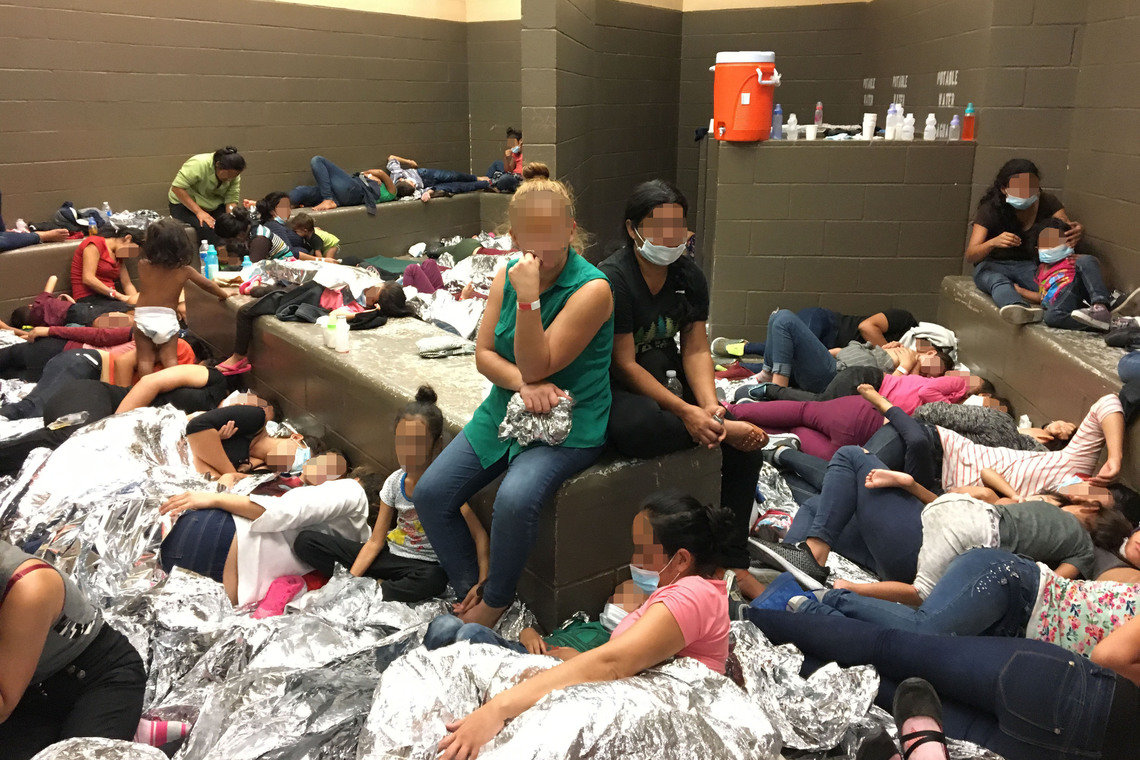 A Department of Homeland Security inspection report shows overcrowding of families on June 11, 2019, at the Weslaco, Texas, Border Patrol station.

Office of Inspector General/Department of Homeland Security via Getty Images

In 2018, President Trump promised to “terminate” the Flores agreement, calling it a “selling point” for smugglers who exploit children for profit. In a letter to Congress the following year, he listed “terminate the Flores Settlement Agreement” as the one of the most “pressing legal changes” to secure U.S. borders. But Flores can’t be terminated with a stroke of the president’s pen.

Under the terms of the agreement, the federal government must propose policies that substantially mirror the protections in the settlement and must then be approved by the court. The government was supposed to replace the settlement with regulations within a few years. Twenty-four years and four presidents later, no such policies have been enacted.

The administration attempted to eliminate the agreement’s requirements by drafting new regulations in 2019. Judge Dolly Gee, the federal district judge overseeing Flores, rejected the proposal, stating in its decision that the policies “do not implement the Flores Agreement, they intentionally subvert it.” The Trump administration appealed the rejection to the 9th Circuit Court of Appeals, where a decision is still pending.

In recent months, holding facilities have become less cramped and the stays shorter. That is largely because in March 2020, President Trump drastically restricted land border crossings by invoking the 1944 Public Health Service Act, authorizing the U.S. government to turn away people and goods at the border on public health grounds. Since then, authorities have expelled thousands of children and families.

If and when the borders fully reopen, the questions of appropriate and enforceable standards will remain. Some experts and lawmakers see the need for a complete overhaul of the immigration system to avoid repeating the problems of the last two years.

“There are many things we can do,” said Jayapal, who is calling for a large scale reform package that would bolster family case management and supportive services, broaden protections for migrant children and strengthen accountability measures for agencies responsible for their care and custody. She advocates ending detention altogether for families, children and the vast majority of other migrants who pose little safety risk to the community.

“We need to rethink our border policies completely,” she said. “We should not be detaining kids.”

Correction: A previous version of the story incorrectly stated that the Trump administration’s appeal of its proposed Flores regulations was to the Supreme Court. The appeal is currently pending a decision in the 9th Circuit Court of Appeals.