Between being sober, getting a visit and having a surprise feast with the mean girls in my unit, I still cherish that day. 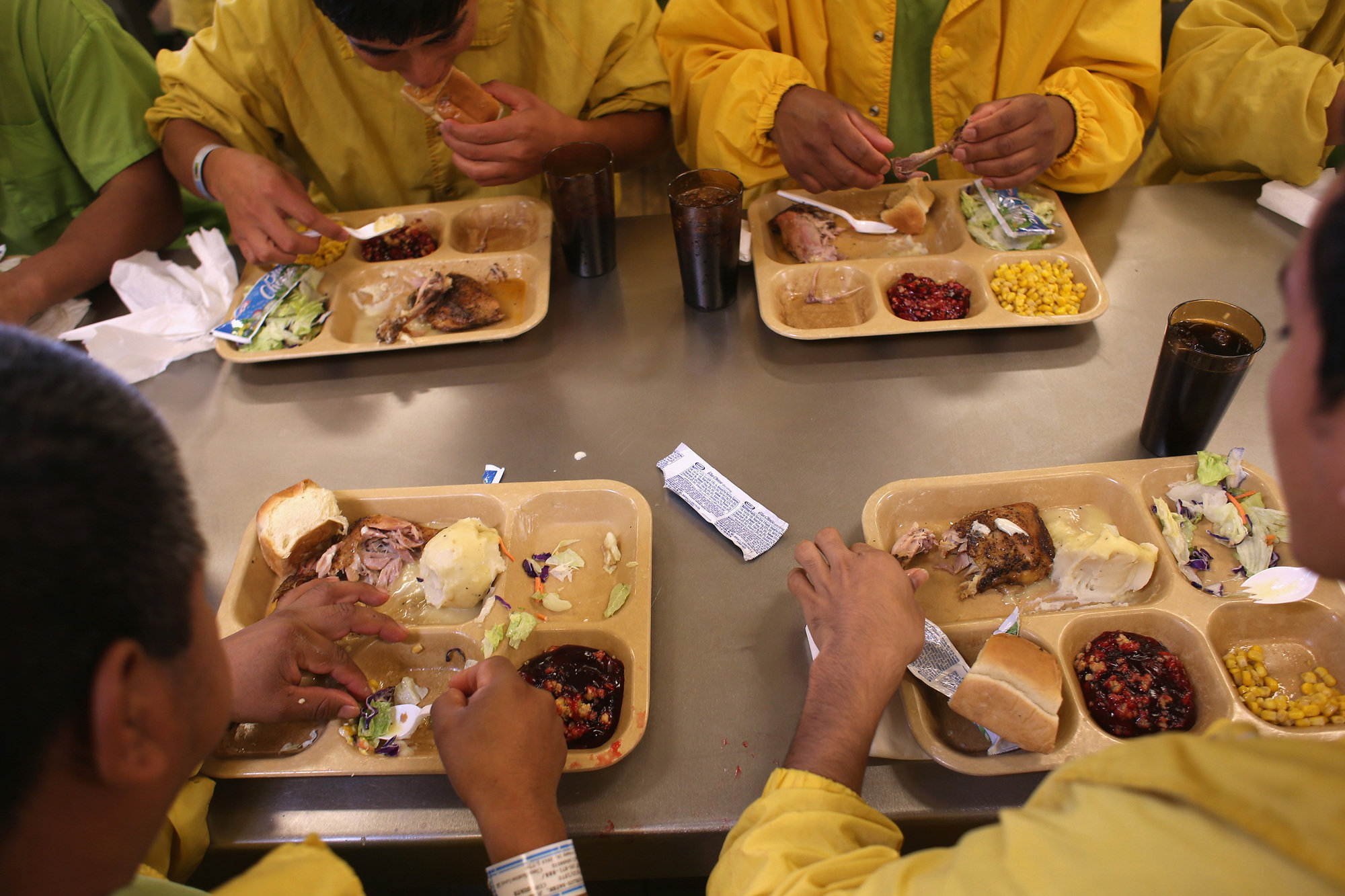 Detainees eat lunch at the Immigration and Customs Enforcement detention facility in Florence, Ariz., on Feb. 28, 2013. John Moore/Getty Images
By Keri Blakinger
Perspectives from those who work and live in the criminal justice system. Sign up to receive "Life Inside" emailed to you every week.

Thanksgiving was not the worst holiday in prison but, looking back, I think maybe it was the saddest.

Behind bars, the best holidays were usually the ones that had been the least exciting in the free world—things like Labor Day, Memorial Day and Super Bowl Sunday. Times when we didn’t miss our families as much, when it didn’t feel like an entire season of celebration was continuing without us.

Still, in some sense, my first Thanksgiving in custody was better than the ones before it, when I’d been addicted to heroin and selling drugs to feed my habit. Back then, most of my holidays were a druggy blur, save for the occasional near-disaster—like the year a housemate got chased down the street with a baseball bat and had to spend the rest of the day in hiding because he’d urinated on another guy’s coke stash. I was too high to be bothered by it at the time; it was just another crazy drug story. But if I’d been sober enough, it might have seemed sad and lonely.

A few years later, I got arrested with a Tupperware full of heroin, and I was stone cold sober for my first Thanksgiving in prison. That was in 2011, a few months after a judge sentenced me to 2.5 years behind bars for felony drug possession.

In the New York prison where I did a lot of my time, we lived in dorms that looked like warehouses. It was always cold in the winter, and the heat was never high enough. On weekends and holidays they only fed us twice a day, lumping breakfast and lunch together, with meals never particularly worth eating. But on Thanksgiving, I skipped the mess hall: I was lucky. I had a visitor.

The person I was dating had driven 2.5 hours to go through Albion Correctional Facility’s tedious screening process and sit across from me at a beat-up table in a noisy visiting room. We didn’t have our families around and were surrounded by prisoners in green and officers in blue. Our celebration was pitiful, but we had each other. First, we played Scrabble, as per usual. Then we enjoyed one of the major perks of visitation: snacks from the vending machine.

We used up all of our quarters on soda and candy, then we took a paperclip and carved the words “turkey” and “mashed potatoes” onto the Snickers and Reese’s. We called it our holiday meal.

Then I went back to my dorm. At that point, I lived in an absolutely awful unit. Everyone hated each other and my bunkie had it out for me. There were thieves who would steal your toilet paper and there were fights in the bathroom. It seemed like we had all the creepy and mean officers assigned to us—the ones who would watch us change, hand out disciplinary tickets like candy and send people to solitary for things like wearing pajamas in the daytime.

But that Thanksgiving, we had the one good officer. He came in and spotted a few women hogging the hot plates in the dayroom, making food only for the people they liked.

So they did. We all got together and donated commissary items. I lived on canned peas, so I pitched in some of them. Other people showed up with instant mashed potatoes, rice, beans and dry pasta.

They cooked all day, and everyone with any culinary inclination pitched in. Supplies were limited. Most spices weren’t allowed, but some people had already bought them on the prison black market.

Despite the lack of tools and the hodgepodge of ingredients, the result was amazing: pasta salad, spiced cabbage, rice, yams, turkey, cranberry sauce, green beans, macaroni and cheese, and 10 or 15 different kinds of cakes and pies. Most of it was a little orange because Sazón is the number one spice in prison. But it tasted so good, and no one fought.

Now this is what I think of when I think of redemption. It was only one day, and then everything went back to how it was. But this is how change happens, one day at a time. People learn about kindness and hope and change through individual moments that eventually add up to a different person. Those moments felt so scarce behind bars.

That’s why this Thanksgiving makes me so sad. I think of all the people in prison living with the pandemic, the lockdowns, and the months of closed rec yards and day rooms and visiting rooms. Some facilities have restarted visitation and are trying to get back to normal, but many aren’t there yet. And either way, crowding around a hot plate to cook a buffet meal is not safe anymore. People behind bars will not witness that fleeting scene of redemption I saw almost 10 years ago. The year 2020 has made prison holidays even sadder.

This week, I messaged a man in solitary confinement. He communicates with his family and friends on the outside through a contraband phone. For him, pandemics and lockdowns do not make much difference.

This holiday season, he says, the mood is much the same as in years past: “It's ALWAYS desperation.” That’s not to say he won’t celebrate—he will. Last year, he had a cellmate and together they made tacos and drank smuggled-in gin. This year, he’s hoping to swap out the gin for something more efficient like Everclear—and to figure out a way to feed the whole pod, “whether they are indigent or not.”

Whatever prison magic he pulls off, he will celebrate it alone in his cell, in a lockup ravaged by coronavirus. And if he wants to witness any redemption, he will have to supply it himself.

I know this year is harder for some of us as we cancel Friendsgivings and weigh the risks of going home against the sadness of staying put. It’s harder to remember what we’re grateful for now, and it’s harder to see light in such dark times. Personally, I have not handled this year’s isolation well and, even in a good year, I am not generally an optimist.

Still, when I think back to Thanksgivings past, it’s so much easier to be grateful that I am not where I was, that I am out and working an amazing job where I can tell the stories of the people who are still inside, plotting to score some Everclear, carving “turkey” on their Snickers—and counting down the days to freedom.