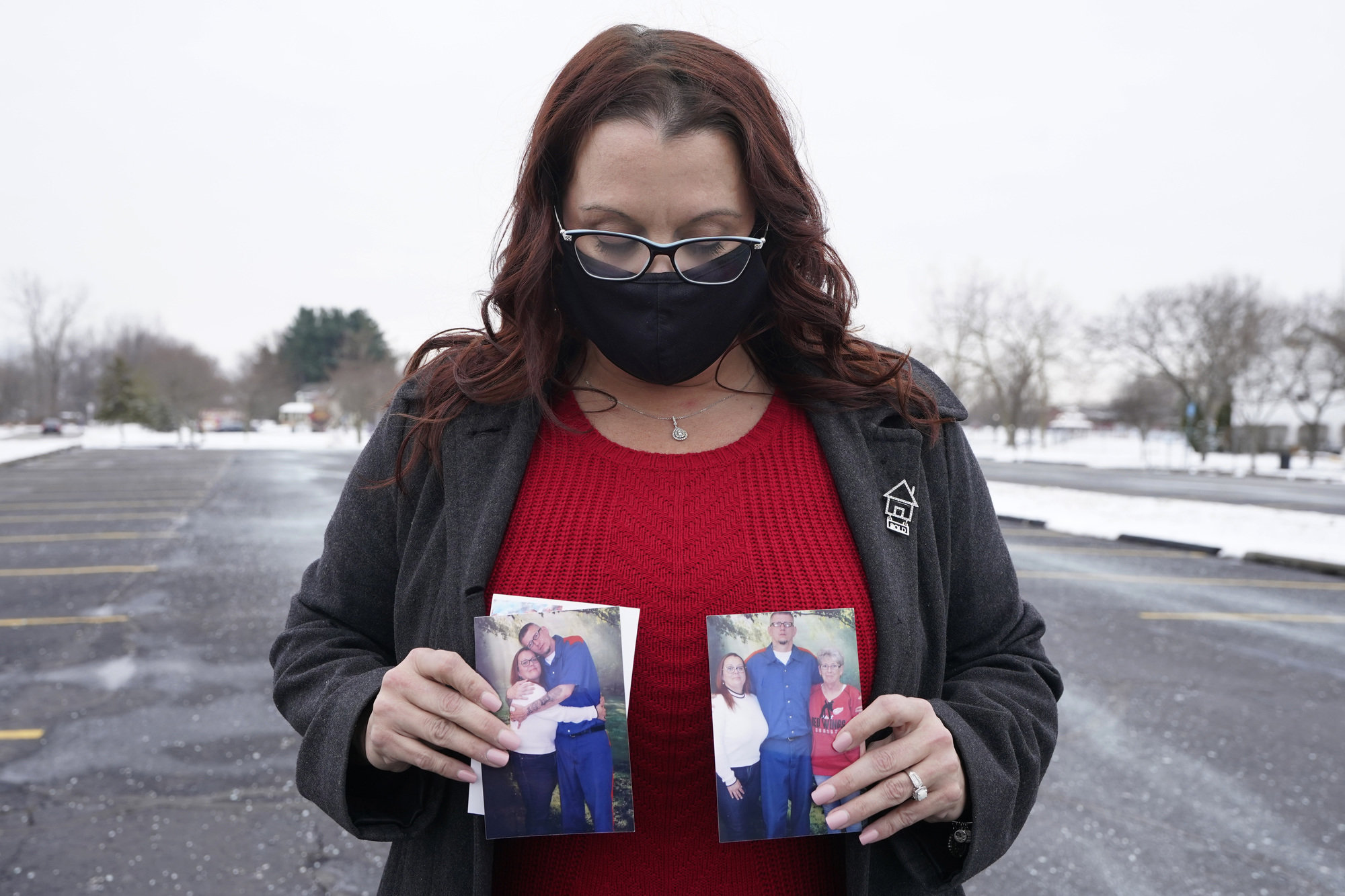 Jennifer Gross holds photos of herself with fiancé Robert Vermett, who is incarcerated at Michigan’s Kinross Correctional Facility and recovering from COVID-19. Carlos Osorio/Associated Press
By Cary Aspinwall and Ed White
Coverage of the COVID-19 pandemic, criminal justice and immigration.

DETROIT — Families of men incarcerated at Michigan’s Kinross Correctional Facility believed its remote location would spare it from a deadly COVID-19 outbreak. For a while, they seemed to be right.

Kinross, built on the grounds of a former Air Force base in the Upper Peninsula, is closer to Canada than it is to Detroit. Unlike most prisons in Michigan, Kinross had remained almost unscathed by the coronavirus with only one case between March and October.

But on Oct. 28, corrections officials transferred nine prisoners to Kinross from Marquette Branch Prison, several hours west, where COVID-19 was running rampant. There were 837 confirmed cases by late October, 350 of which were active when the men were transferred.

Roughly three weeks later, Kinross had its first major outbreak, corrections department data showed. Though agency officials say it's not because of the transfers, more than 1,100 prisoners have now been infected, at least seven have died and more than 100 guards have fallen ill. The prisoners who came to Kinross had been transferred twice, sent first to Marquette after a riot where they were held, and then tested positive for COVID-19 there before leaving to Kinross, officials said.

In prisons around the country, COVID-19 outbreaks have followed transfers of prisoners or prison workers. Nearly all of the 25 state prison systems and the federal Bureau of Prisons that responded to a survey conducted by The Marshall Project and The Associated Press said they had reduced or limited the number of prisoners they moved due to the pandemic. Eight states halted the practice except in special circumstances. The reductions were keeping in line with medical guidelines.

But most of those states lifted their restrictions by September and few prison systems heeded the earlier lessons as the pandemic worsened this winter, worrying families of prisoners and correctional officers who work in the prisons.

The coronavirus has killed more than 300,000 people in the U.S., and cases are rising again this winter after leveling off in the late summer months. There have been more than 275,000 cases inside U.S. prisons. Prisons are a particular concern because social distancing is virtually nonexistent behind bars, prisoners sleep in close quarters and share bathrooms and each prison has varying policies on personal protective equipment and who gets it.

Oklahoma’s prisons reported relatively few cases of COVID-19 until state officials closed several units because of budget cuts, transferring more than 4,500 prisoners between facilities from late July to September. Massive outbreaks followed, with more than 6,600 prisoners testing positive and at least 37 dying from the virus.

In Amarillo, Texas, officers who worked at the Neal Unit prison were proud the facility remained unscathed by the virus until September. That’s when strict protocols were loosened by the warden, including mandatory isolation of transferred prisoners, according to a longtime correction officer at the prison who had direct knowledge of the protocols and was not authorized to speak publicly and spoke to The Marshall Project on condition of anonymity. The virus soon took over, infecting hundreds of prisoners and killing a chaplain and a food service manager at the prison. Jeremy Desel, spokesman for the Texas Department of Criminal Justice, said the cases were found mostly among prisoners who were asymptomatic and disputed the officer’s account. “There has been no relaxing of protocols, if anything they’ve been tightened,” Desel said.

Families of those who’ve died from the virus in California prisons have directly blamed transfers for the uncontrolled spread of disease, including an outbreak at San Quentin State Prison that led to 28 deaths. The family of a prisoner who died filed a notice they would sue, alleging officials ignored health officials' recommendations when they transferred the high-risk prisoners from California Institute for Men in Chino, where an outbreak was already spreading. Health experts had warned of transfers between facilities, saying “mass movement of high-risk inmates between institutions is ill-advised and potentially dangerous,” and would likely spread the virus between prisons, according to the notice.

Transfers have also been linked to outbreaks in the federal prison system, including a recent outbreak at the facility in Fort Dix, New Jersey. Families and advocates say it was the result of the Bureau of Prisons transferring 150 prisoners there from a facility in Ohio that’s been battling COVID-19 cases for months.

Michigan had some of the worst and earliest outbreaks of any state prison system. About 20,000 prisoners have contracted the virus since March, and at least 104 have died. Central Michigan Correctional Facility currently has one of the largest outbreaks in the country, with more than 2,000 prisoners testing positive.

State officials said they have followed proper infection-control protocols. Chris Gautz, a spokesman for the Michigan Department of Corrections, acknowledged the transfer of the nine men from Marquette to Kinross on Oct. 28, but insisted that transfers “are not the issue” in the virus surge.

“We’ve looked into that,” Gautz said. “All prisoners who had previously been positive were in a step-down phase, meaning they were no longer contagious. It wasn’t until weeks later when there was a big spike in Kinross.”

But prisoners at Kinross and their families say that the virus spiked within roughly three weeks of the transfers, within the window medical experts say the virus remains contagious. Some of the men transferred still had symptoms and were moved into the prison’s general population too quickly, said Matt Tjapkes, who runs a nonprofit dedicated to prisoners’ medical rights in Michigan called Humanity for Prisoners.

“The prisoners feel so helpless because they can’t control it and they can’t stop it,” he said. “They feel like they’re sitting ducks — and they are.”

Corrections officers, too, are worried about the safety of transfers, said Byron Osborn, president of the union that represents most of Michigan’s correctional officers. More than 2,500 correctional staff have contracted the virus in Michigan and at least three have died.

“There is obviously not a lot of definitive information from the communicable disease experts on the spread of the COVID-19 virus or on the topic of when infected people are no longer contagious,” Osborn said. “We believe that everyone would agree that this is problematic.”

Families of the prisoners who’ve fallen ill at Kinross say they’re angry because the movement of prisoners is the one thing the corrections department controls. 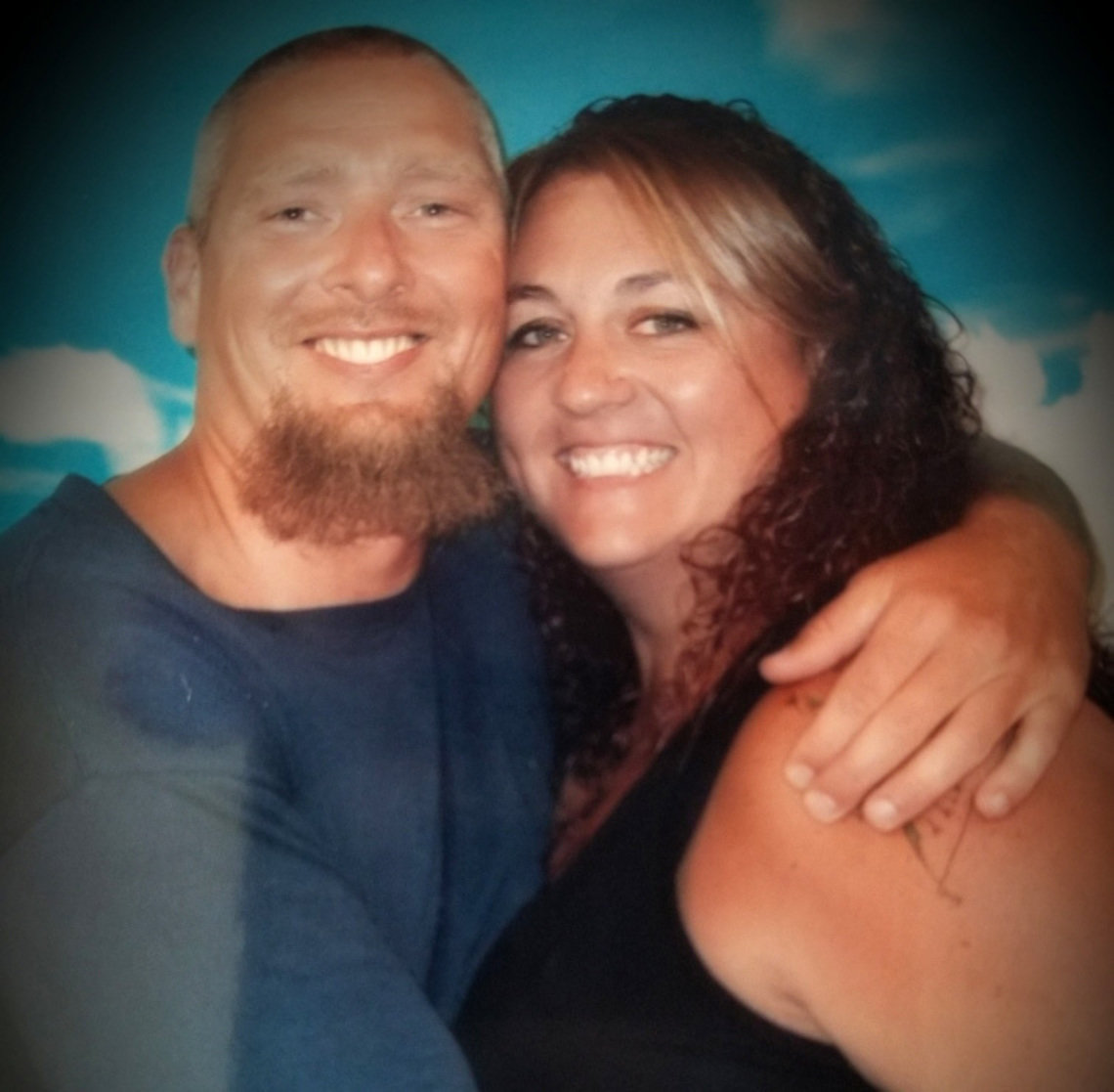 Amy Wallace and her husband, Jerry Wallace, who is incarcerated at Kinross Correctional Facility in Michigan.

Amy Wallace’s husband is one of the men incarcerated at Kinross who caught the virus and recovered. But she said a state prison spokesman recently gave a statement to local media that “pinched a nerve."

The spokesman said it was difficult to know how COVID arrived at the prison, she recalled. “Well, OK. We do,” she said.

Michigan state Sen. Ed McBroom, a Republican from the Upper Peninsula, chairs an oversight committee that has held hearings on the corrections department’s response to COVID-19. He said he has no firm knowledge that points to transfers as the culprit in spreading the virus behind bars. But he called the agency opaque and overly positive, and didn’t give high marks for communication.

“We have to dig in and find out why these outbreaks happen,” he said in an interview. “Were mistakes made? I just don’t know.”

Jennifer Gross thought Kinross' remote location might keep her fiancé Robert Vermett and the other men locked up there safer from the virus, even though she hasn't been able to visit. Vermett is serving a life sentence for a murder conviction.

Days after the transfers, Vermett told her the virus appeared to have made it inside. He got sick, too, and remained seriously ill for more than two weeks.

In an email to her on Nov. 18, shortly before he tested positive, he said: “This WHOLE FUCKING COMPOUND IS INFECTED. Every unit, the control center, the gym, the school, the chow hall, every where … So why are they moving anybody anywhere?”