The National Guard Is Using Force on Prisoners After Little Training

Ohio guard members patrolling inside prisons trained for a fraction of the 5 weeks required of correction officers. 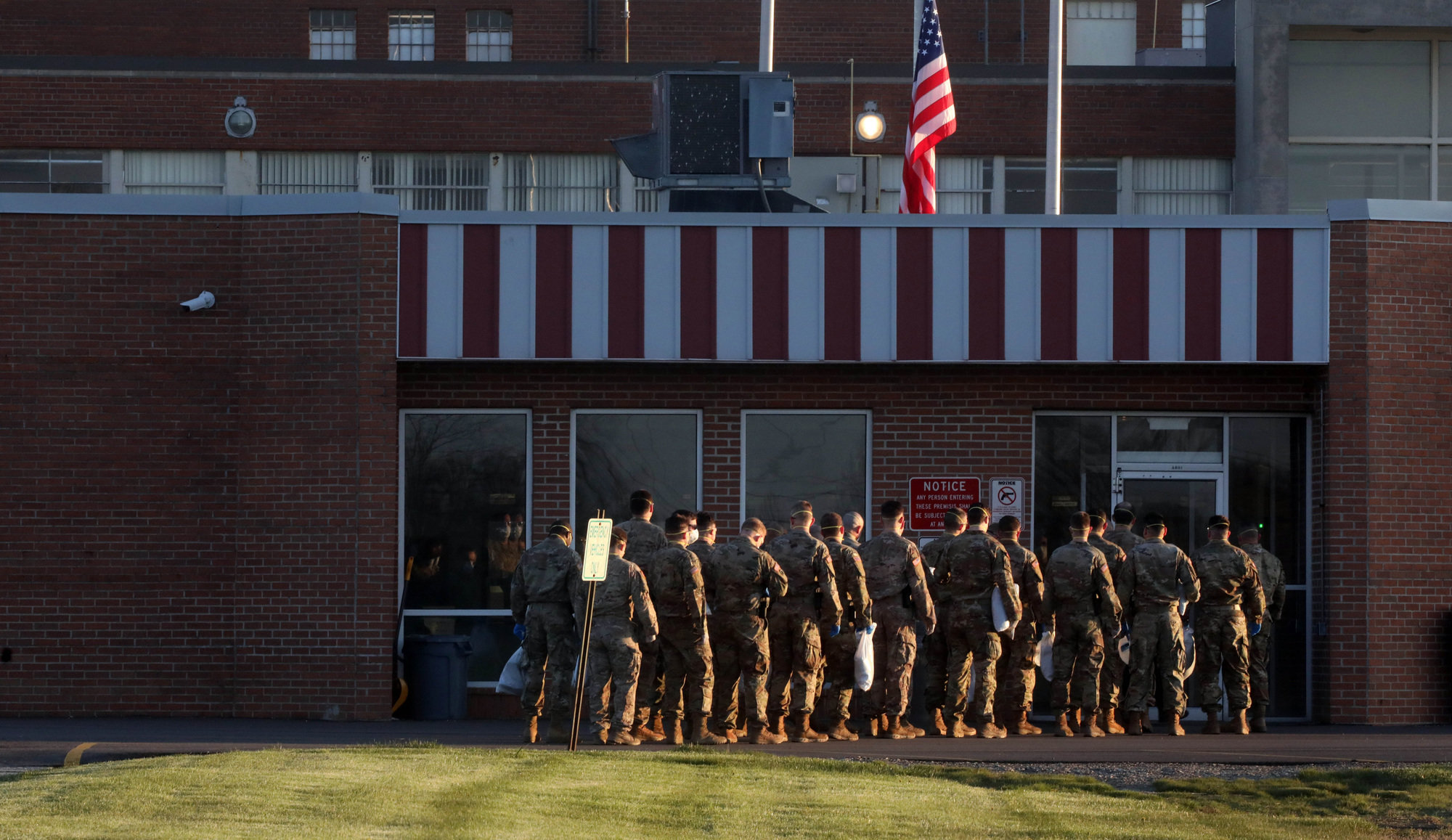 Members of the National Guard headed into the Marion Correctional Institution in Marion, Ohio, to help during the COVID-19 pandemic on April 20, 2020. Amy E. Voigt/The Blade
By Jamiles Lartey

Ohio National Guard members covering shifts for COVID-positive guards in state prisons are receiving just a single day of formal training before interacting with prisoners—a fraction of the training for regular corrections officers. And some are using force even with so little training.

State officials defended the guard members’ training as meant to supplement their military preparation, which includes skills like de-escalating conflict. But David J. Carey, senior staff attorney at the ACLU of Ohio, said it was “disturbing” that people were being placed into “that kind of a sensitive role, with a great deal of power, without being properly trained.” Likewise, two guard members who spoke with The Marshall Project said they’re feeling underprepared for the job.

“We had basically no training, we really just kind of got thrown into the fire,” one guard member said. The soldiers spoke about their deployment on the condition of anonymity, fearing sanctions for speaking outside of the chain of command. The Marshall Project confirmed the facts of their accounts about the training with state agencies.

The guard members’ concerns come as several states have used the National Guard to respond to COVID-19 outbreaks in prisons. Mostly, states have limited those deployments to monitoring prisoners’ health, delivering medicine and food, or patrolling outside prisons. Ohio, however, announced earlier this month that its National Guard would guard prisoners directly to address a shortage of correction officers caused by the pandemic. More than 700 Ohio correctional employees are positive for the virus now, part of more than 3,400 who have tested positive since the start of the pandemic.

The Marshall Project contacted several states that have announced they’re using guard members, and of those that responded only Ohio said its soldiers are working security duty inside prisons. The Ohio guard members, who are wearing military fatigues in the prisons, said they have been told to expect to be deployed through February.

Typically a corrections officer in Ohio receives 40 hours of orientation training and 160 hours of classroom and physical skills training—or about 5 weeks of instruction—along with another two weeks of on-the-job training, the state said.

Guard members, by contrast, are guarding prisoners after only a one-day, 12-hour orientation at the state Department of Rehabilitation and Corrections’ (ODRC) academy, and two days shadowing an officer on the job, the department confirmed in an email. The department listed 11 topics for the orientation, including the Prison Rape Elimination Act, use of force, intercepting contraband, hostage situations and “use of chemical munitions.”

Guard members working security duty are permitted to use force, the department said. The guardsmen interviewed described responding to radio calls to break up fights between prisoners and handle other disruptions, and said they have had to use pepper spray. The corrections department confirmed guard members are carrying pepper spray, but did not immediately respond to a question Monday about the soldiers’ assertions that they had used it.

The department and the Ohio National Guard both told The Marshall Project that the correctional officer training was meant to supplement the general training guard members receive as part of their enlistment. “In addition to the hands-on training they receive from ODRC instructors for this specific mission, Ohio National Guard members also bring with them skills learned during military training. That training includes techniques for self-defense and peacefully de-escalating a situation,” said Stephanie Beougher, a guard spokeswoman.

The two guard members who spoke with The Marshall Project were less confident.

“People look at us like we're Captain America, because ‘if you did basic training, you can do anything,’ but that's that's not the case,” one guardsman said. He worried that without enough time for their correctional officer training to sink in and be reinforced, guard members could be prone to mistakes that could put them or the prisoners in danger.

Corrections department spokeswoman JoEllen Smith said soldiers assigned to work inside prison units “are partnered with a seasoned correction officer.” The guard members, however, said this means sometimes being several floors away from a veteran prison guard.

“If someone wants to hurt me and I need help, every second matters,” said the same guardsman. He added that the vast majority of prisoners have been kind and respectful to guard members, and routinely thank them for their service.

The second guard member worried that using military-taught combat skills, like fighting techniques intended for self-defense, could get soldiers in trouble in a prison setting. “A lot of us don't even want to use what we’re taught to protect ourselves in there. Because it could backfire,” he said.

States from South Carolina to Montana have activated their National Guard to help with corrections testing or staffing issues during the pandemic, but most have defined guard responsibilities in limited terms. Indiana officials told The Marshall Project that guard members were working perimeter security and administrative tasks “with minimal contact” with prisoners. South Carolina officials said its guard members were only conducting medical vital sign checks on quarantined prisoners, and preparing and distributing meals. 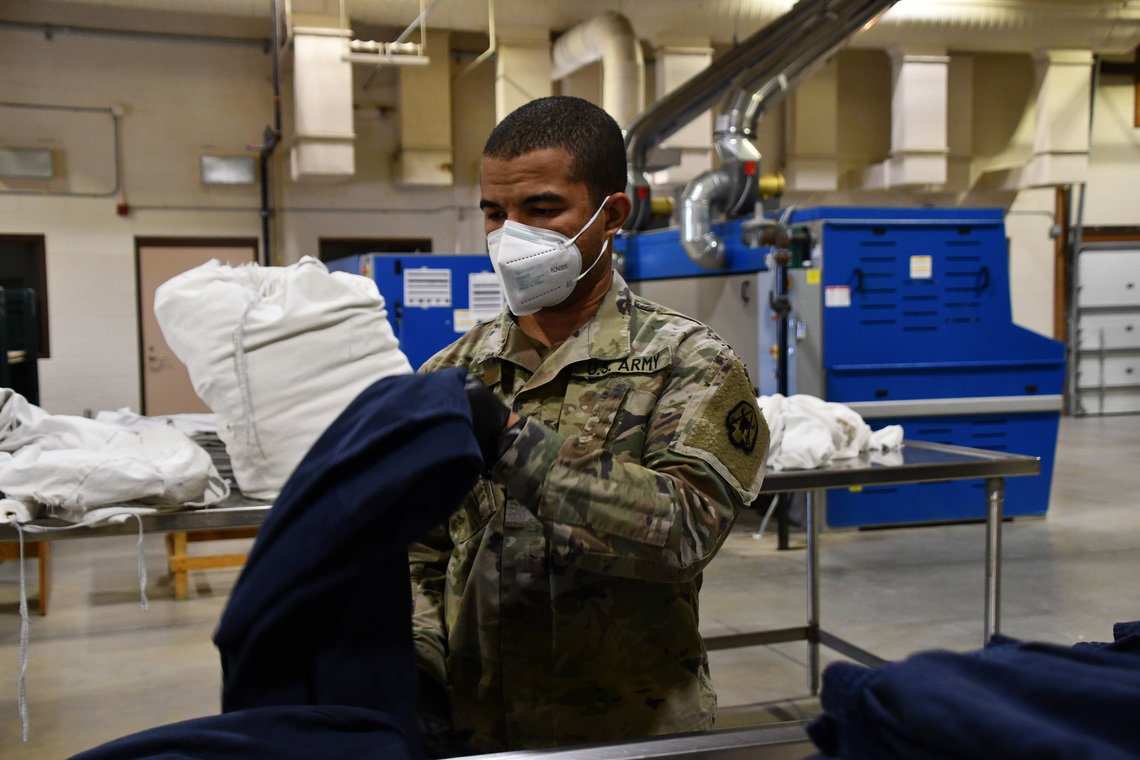 A soldier from the Montana Army National Guard provided laundry services at the Montana State Prison in Deer Lodge, Mont., in November.

“They are not authorized to use force. An SCDC staff member accompanies them during vital checks,” a spokesperson for the South Carolina Department of Corrections said.

In Ohio, guard members have been assisting at prisons since early April, but at that time their mission was defined as “non-security” related and guards were to be unarmed. “This is a medical mission, only,” Gov. Mike DeWine stressed during an April pandemic briefing.

Several weeks later, however, the governor signed a proclamation allowing for the guard to provide “security support” in prisons where COVID-19 had diminished staffing levels. Late last week, DeWine expanded that proclamation to cover county jails, and at least one—Cuyahoga County, which includes Cleveland—has requested guard support. The county did not respond to a request for comment.

Several people incarcerated in Ohio prisons said the guard members were a more welcome presence than some of the veteran guards they’ve replaced.

“They’re alright to me. In fact, they’re better than some of these guards,” said Michael Reeder, who is incarcerated at Richland Correctional, about 80 miles southwest of Cleveland. “Working in prison, goes to [corrections officer’s] heads because they got authority over people.”

Billy Renshaw, who is incarcerated at Pickaway Correctional south of Columbus, said by email that it’s been “interesting” to have people who are not corrections officers doing security work at the prison. “They haven't learned to hate us first and view us as less than human. They're cordial, not timid or scary,” he said of the guard members.

Some incarcerated people have worried that new people coming in and out of prisons could increase the risk of exposure to the virus. Guard members too, worry about contracting the disease and described limited access to personal protective equipment. One guard member said corrections officers told them “we guarantee your COVID” when they started working at the prison. Both guard members said several soldiers have tested positive for the virus. State guard officials did not say how many soldiers have tested positive.

The guard members said when they signed up for military service, they knew they could be deployed into dangerous situations, including war. But they still expressed frustrations with their leadership in coordinating the effort. They said many guard members are fresh out of high school, and this is their first time leaving home and their families.

“They just threw all the people that are younger and who don’t have rank—and it just feels like we were abandoned,” one guard member said.