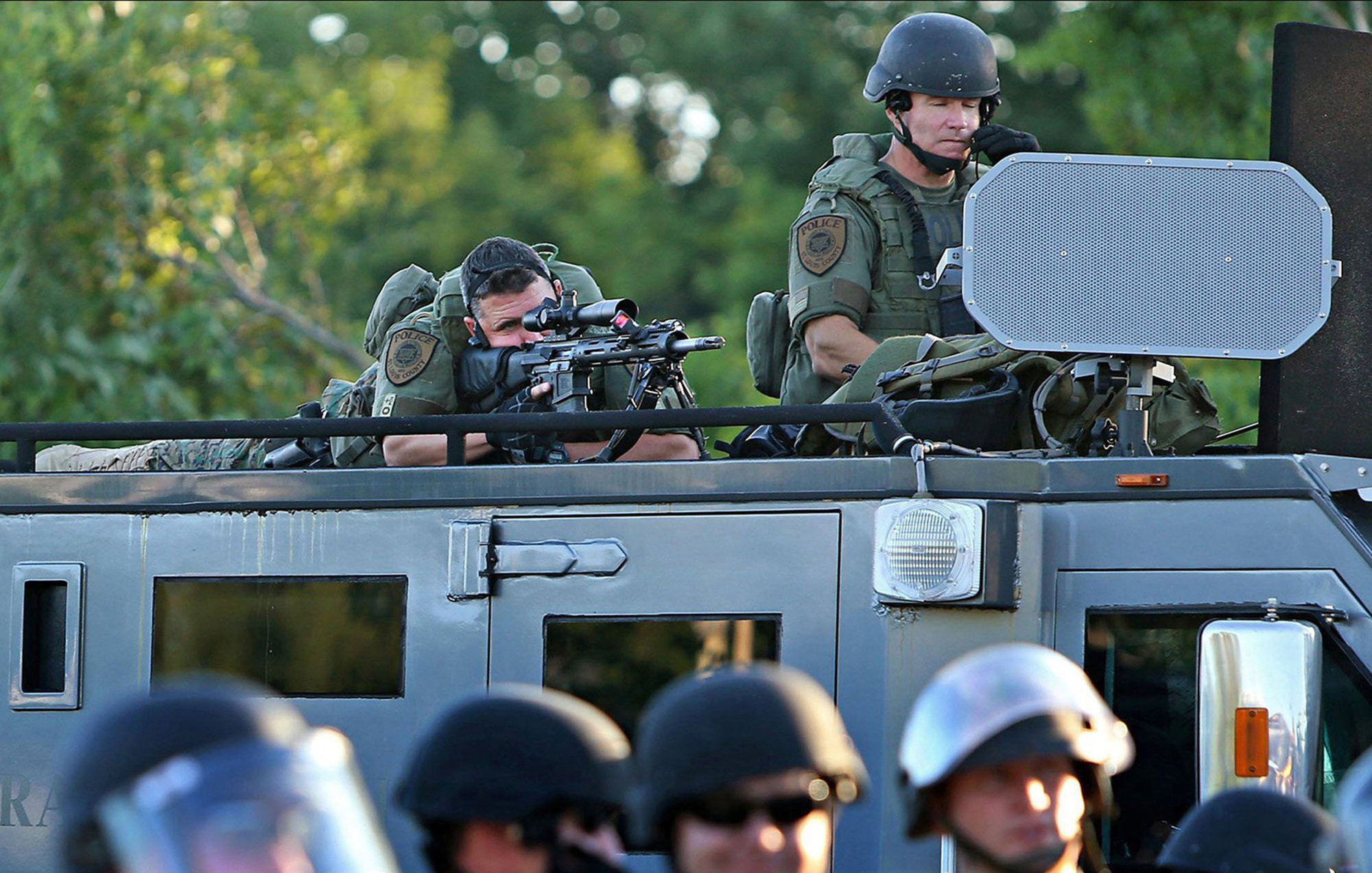 Heavily-armed police deployed during protests over the killing of Michael Brown in Ferguson, Mo., in 2014. David Carson/St. Louis Post-Dispatch/Tribune News Service, via Getty Images
By Eli Hager and David Eads

All but hidden in the military spending bill that Congress enacted in its first override of a Trump veto is a new restriction on police militarization. The provision bans grenades, bayonets, weaponized combat vehicles and weaponized drones from being transferred from the military to local police departments.

Opponents of the militarization of police have long criticized the federal 1033 program that allows excess Pentagon equipment to be distributed to state and local police. This summer, Sen. Brian Schatz, a Democrat from Hawaii, snuck a clause into the expansive defense bill, called the National Defense Authorization Act, limiting the practice—and a version of that language remained in the legislation up until its passage last week.

“These reforms will help take weapons of war,” Sen. Schatz said, “out of our communities.”

The 1033 program dates to the Clinton era, and allows any weapons and gear that the U.S. military is not using—including Humvees, scuba-diving equipment and even marching band instruments, according to reporting by The Marshall Project—to be passed along to local law enforcement, contributing to scenes of police equipped as if for war when confronting peaceful protests in Ferguson in 2014 and elsewhere. More than $6 billion in federal battlefield supplies has gone out to more than 8,000 police departments since the early 1990s.

In the Republican infighting over the new law, little mention was made of the clause keeping these weapons from getting into the hands of cops. Trump’s chief reason for trying to veto the law had been that it also requires the renaming of military bases named after Confederate generals.

Experts on military gear-to-police giveaways said that most police do not need or use the kinds of equipment now restricted under the law. Studies have shown that officers’ safety is not improved by having such extreme weaponry, nor are crime rates reduced by the presence of tanks, drones and the like in communities.

But Kenneth Lowande, a University of Michigan public policy professor who researches the 1033 program, also pointed out that most of the weapons prohibited by the new defense authorization act have not in fact been distributed to police ever since President Obama recalled many of these pieces of equipment in 2015. “This was effective and eliminated most from circulation,” Lowande said, noting that some were even destroyed at the time.

That said, the Trump administration lifted Obama’s rule in 2017, and some bayonets and other gear started trickling back out to cops, according to the most recent numbers on the program.

A Marshall Project analysis of that data shows that a few of the now-banned items are in active use. Five police departments have 21 total boxes of grenades; 66 bayonets are still in the possession of law enforcement agencies. Police also continue to hold more than 71,000 military-issued guns, like automatic rifles and pistols, including AR-15 style guns.

The provision pushed into law by Sen. Schatz separately requires law enforcement agencies that receive weapons from the federal government to be trained in de-escalation of force and to learn about the rights of U.S. citizens under the Constitution.

Whether that requirement is effective depends on whether the incoming Biden administration prioritizes it, experts said. Will the Defense Department enforce the rule? And what will such training look like, given that many police departments’ existing attempts at teaching their officers de-escalation tactics have not all been successful?

David Eads is The Marshall Project's data editor. He has been covering criminal justice issues since co-founding The Invisible Institute in the early 2000s. He was a member of the team of independent journalists who won the 2019 Premio Gabo for reporting on mass graves in Mexico.