We Asked People Behind Bars How They Feel About Getting Vaccinated

A Marshall Project survey of the incarcerated showed widespread interest in the coronavirus vaccine as well as pervasive distrust of the prison medical system. 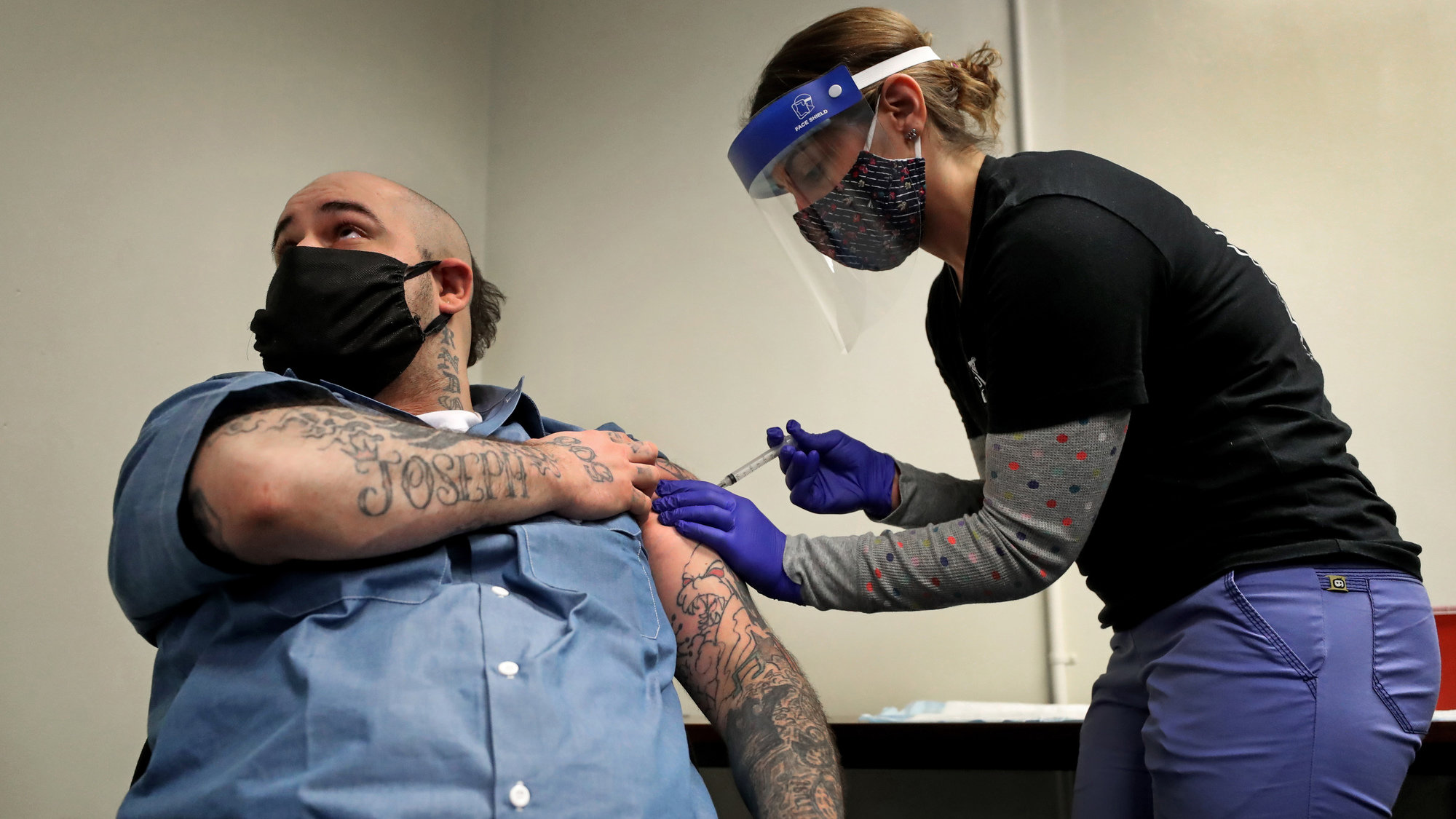 Christian Millett gets the first of two COVID-19 vaccine shots from Alyssa Dobbs, a contractor in the medical department at the Worcester County House of Corrections in West Boylston, Mass., in January. David L. Ryan/The Boston Globe, via Getty Images
By Nicole Lewis
How the coronavirus compounded the failings of the criminal justice system.

Larry London, who is incarcerated at Oshkosh Correctional Institution in Wisconsin, said he has counted numerous ambulances leaving the prison grounds as he watched from his cell window. Four of the 25 people who have died from COVID-19 in Wisconsin prisons were housed in his facility. He knew two personally.

This story was published in collaboration with Slate.

Prison officials’ handling of the pandemic has given him another reason not to trust the prison or the medical staff, he said. Still, London said he is eager for the coronavirus vaccine. He is scared of dying in prison.

One Year Later: The Pandemic Behind Bars
How the coronavirus compounded the failings of the criminal justice system.
Related Stories

“Since the onset of this pandemic I have feared for my health and safety,” he said.

In 35 states, people in prison could be among the first to receive the coronavirus vaccine. So far, about 63,000 incarcerated people across the country have been immunized, according to data compiled by The Marshall Project and The Associated Press.

The Marshall Project surveyed incarcerated people in state and federal prisons in January and February to understand attitudes toward vaccination. The majority of the 136 respondents said they would get vaccinated when they can. Even wary prisoners were open to vaccination, the survey showed. Most respondents said they’d get vaccinated if their questions were answered, if their friends and family said it was safe, or after guards received their immunizations first.

Yet prison officials will have to overcome numerous obstacles to vaccinate the nearly 1.2 million people imprisoned in the United States. Many respondents harbor a deep distrust of medical staff. Misinformation abounds, and officials have moved slowly to explain the vaccine’s benefits and risks.

But the biggest barrier lies beyond prison walls. Public health officials have urged states to prioritize prisons and jails because they have been the epicenters of outbreaks. To date, at least 383,000 incarcerated people have contracted the coronavirus, and more than 2,400 have died. But limited vaccine supplies and public resistance to allowing prisoners early access to the vaccine threaten to undermine their efforts. So far, only nine states have included incarcerated people in phase 1 of the vaccine rollout.

The desperation borne out of a year in lockdown seems to be boosting incarcerated people’s interest in the COVID-19 vaccine, said Lauren Brinkley-Rubinstein, who leads the COVID Prison Project, which tracks correctional facilities’ responses to the pandemic. In Arizona, for example, Brinkley-Rubinstein said a systemwide survey showed that more than 21,000 of the 38,000 people incarcerated in the state were willing to get a COVID-19 vaccine. Only 4,000 said they would not take the vaccine. The rate of refusal is far lower than that for the flu vaccine, she noted. Brinkley-Rubinstein believes officials will have the best chance of overcoming vaccine hesitancy if they emphasize how the shots might improve living conditions for the incarcerated.

Christopher Dawson, incarcerated at Columbia Correctional Institution in Wisconsin, was one of many who described how COVID-19 has upended prison life. In his prison and others across the country, college classes or substance abuse treatment programs ended abruptly and lockdowns were imposed in attempts to stop the spread. Many prisoners have endured days and months on end in their cells. Many have not seen their families in nearly a year.

“This has been a horrible experience dealing with this virus inside of here,” Dawson wrote. “We never know what is happening from one day to the next.”

The prison has haphazardly enforced social distancing and hygiene protocols, he said. The men aren’t getting any extra hand soap and can only disinfect their cells twice a week. Prison officials won’t let them touch any workout equipment during rec time out of fear of spreading the virus. But the men are forced to shower “shoulder to shoulder,” Dawson said.

Dawson has some reservations about the vaccine but said he is willing to get vaccinated, “so we can get back as close to normal as possible.”

A spokesperson for the Wisconsin Department of Corrections said that restrictions are a response to suspected outbreaks of the coronavirus and that as cases decline, they are loosened.

Incarcerated people may express increased interest in the vaccine, but to get shots in arms, prison officials will have to overcome distrust of the medical system and its staff. Decades of subpar medical care have alienated those behind bars, leading many survey respondents to say they worry the medical staff may not properly store or handle the vaccine.

Some worry they’d be left to languish in their cells if they had an adverse reaction to the vaccine. “My biggest fear is that I get sick and don't get the proper medical treatment,” wrote Robert Lovato, who is incarcerated in Federal Correctional Institution, Tucson in Arizona.

Many doubt that a system that has historically shown such little regard for their well-being would suddenly offer them a potentially lifesaving vaccine. More than half the respondents said they don’t believe the prison is acting in their best interest by making the vaccine available to prisoners. And few said they believe medical staff would provide accurate information about the vaccine. Nearly one-third of respondents said the vaccine is just another attempt to experiment on prisoners without their knowledge. Another third said they aren’t sure.

Today, research in prisons is tightly regulated. But experimentation on incarcerated people was much more permissible in previous decades. In 1963, for example, a team of researchers at the University of Washington set out to understand the effects of radiation on male reproductive function. The researchers used prisoners, exposing the test subject’s scrotums to X-rays and requiring them to be sterilized to participate. Decades later, some of the men who participated in the experiment received a $2.4 million settlement as part of a class-action lawsuit against the university and the corrections department.

Experimentation aside, the incarcerated are sometimes victims of coercive medical procedures. Between 2006 and 2010, nearly 150 women imprisoned in California were sterilized without proper consent, according to a 2013 investigation by the Center for Investigative Reporting.

Many incarcerated people don’t know enough about the vaccine to decide whether to take it, the survey showed. Many of the respondents raised basic questions about the vaccine: What are the long-term side effects? If I have had the virus, do I still need to be vaccinated? Can you still get COVID-19 after receiving the shots?

Many respondents noted that guards have stoked fears over the vaccine’s safety by dramatizing the few instances in which people died after receiving it. Prison officials haven’t done enough to dispel the myths and provide basic information about the vaccine and its benefits and risks.

Prison officials in some states have shared fact sheets and answered frequently asked questions about the vaccine. But most respondents said they get their information from the news and only trust information from family members. 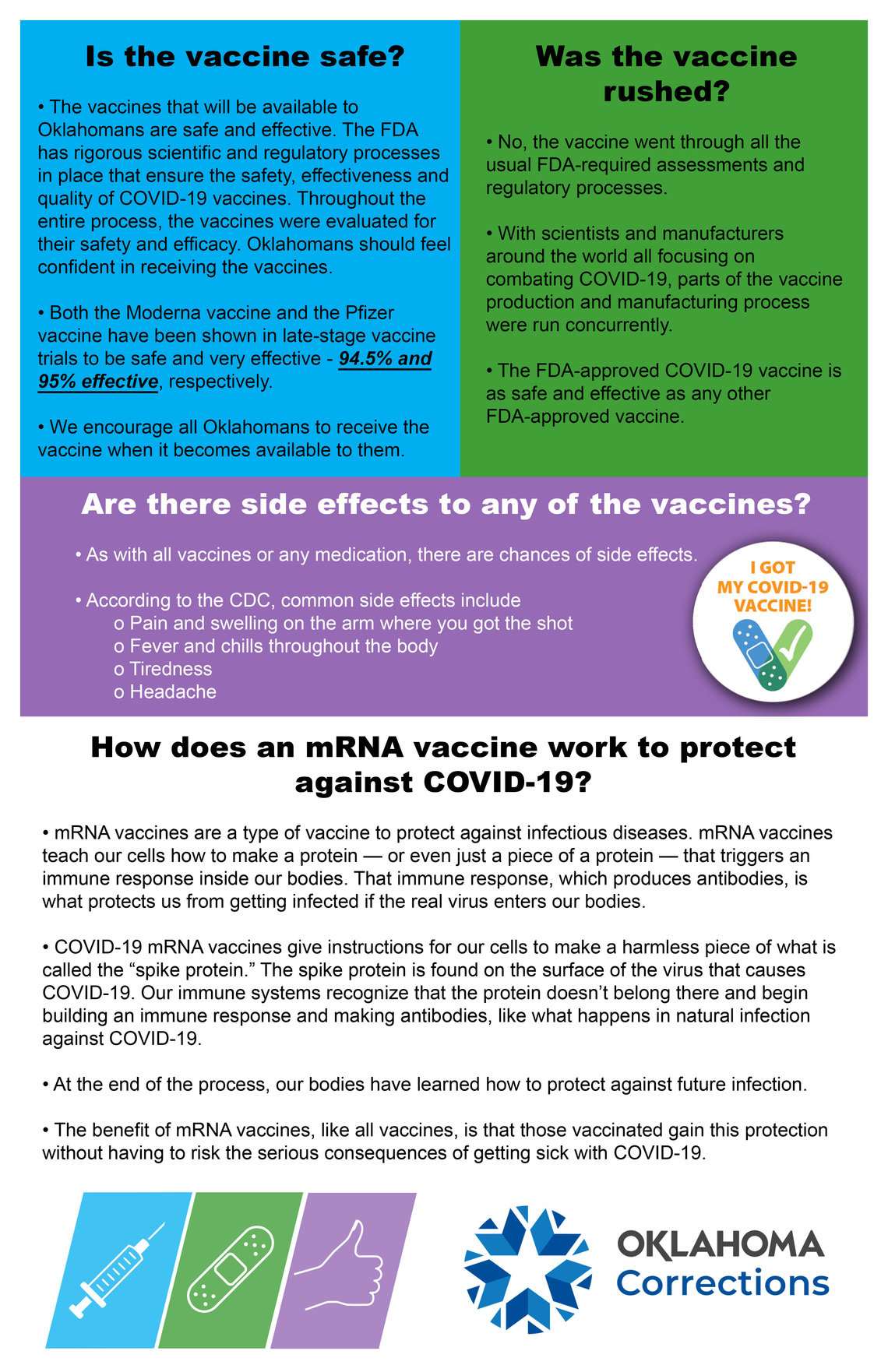 An information sheet about COVID-19 vaccines was sent to Oklahoma prison facilities and offices.

In some cases, the information provided hasn’t countered conspiracy theories about the virus and the vaccine. Several respondents believe the vaccine will alter their DNA. Some fear the virus was intentionally created to cull the population.

Public health experts say prison officials could learn from outside community outreach efforts that tap local leaders to encourage vaccinations in communities with low rates. Inside prison, officials could enlist prisoners regarded as leaders, such as lifers or even gang members. But pulling off a peer-led vaccination campaign is logistically difficult in prisons where the pandemic has limited movement.

Some states have turned to staff instead. In Rhode Island, for example, two nurses have gone cell to cell to answer questions and get consent from all incarcerated people who are interested in being vaccinated. By mid-February, officials had immunized every interested prisoner, about 900 people.

Their success owes largely to long-standing relationships with the Department of Health and the trust of the incarcerated, said Dr. Justin Berk, the medical director for the Rhode Island Department of Corrections. One of the nurses making the rounds has worked for years providing treatment for people struggling with opioid addiction, Dr. Berk said. “Both have spent a lot of time with the incarcerated population and were the perfect people to be going cell to cell.”

This kind of high-touch process may work well in a small system but is harder to pull off in prison systems with thousands of prisoners. Rhode Island incarcerates roughly 1,800 people. California and Florida have prison populations nearly 50 times the size.

Prisoners in California are beginning to be vaccinated. Staff members have gone cell to cell to tally a refusal list. Those who say they don’t want the vaccine then receive one-on-one follow-up to answer any questions. Prisoners with intellectual disabilities also undergo a specialized consent process. It's a time-consuming operation, said Andrew Mendonsa, a psychologist at California State Prison in Sacramento, and pandemic-induced staffing shortages have only added to the strain.

“It feels like we are trying our hardest and we are putting all burners on high,” Mendonsa said. “And it still feels very fragile.”

All it takes is one bad batch to bring the vaccination efforts to a halt, Mendonsa said. In mid-January, California had to recall over 330,000 doses of the Moderna vaccine after seeing a higher than usual number of people with possibly severe allergic reactions. Data from the Centers for Disease Control and Protection indicates that such reactions are rare, usually occur immediately after a vaccination, and can be treated. The recall paused vaccinations at community clinics as well as prisons and jails for several days, Mendonsa said. Nevertheless, vaccinations in the state continue apace: California has vaccinated more than 37,000 incarcerated people to date.

Part of the problem, experts say, is a general hostility toward incarcerated people and a misperception that prisoners are not part of their home communities.

But that same hostility is deepening some people’s resistance to vaccination. James Ellis, who is incarcerated at Marion Correctional Institution in Ohio, said he does not want a vaccine. For one, Ellis said he has already had the coronavirus. But his bigger concern is prison officials’ motives. Many of the people he interacts with treat prisoners as if they are not human, he said.

“I don't have a lot of faith that people actually care about my well-being,” Ellis wrote, using the prison’s email system. “Most think guys in prison are the scum of the earth, so it’s hard to feel good about people who think that low of me, and it’s hard to believe they are actually doing something for me that's in my best interest.”

This article has been updated to clarify details about a brief pause in California's vaccination efforts.

Ariel Goodman contributed to this report.