Biden vowed to end the death penalty. A recent court filing suggests where he might start. 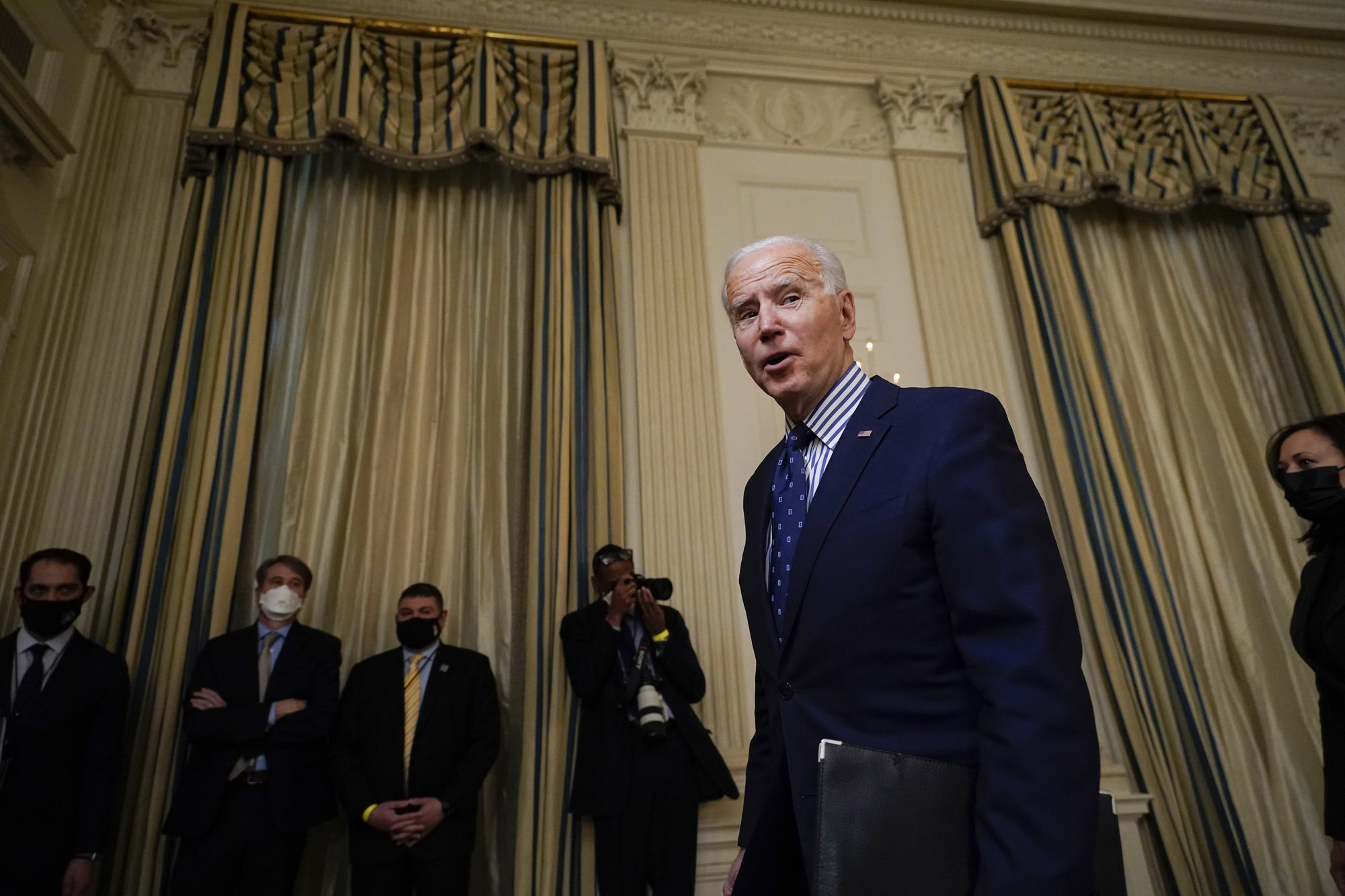 President Joe Biden at the White House in March. Alex Brandon/Associated Press
By Keri Blakinger
The death penalty is in flux. These are the stories that you need to know about capital punishment's past, as well as its uncertain future.

When President Joe Biden took office, one of his first tweets showed him sitting in front of a stack of executive orders, preparing to undo his predecessor’s legacy by tackling everything from student debt to the pandemic to climate change. But despite his campaign trail promises to help end capital punishment, none of his flurry of executive actions mentioned it.

While he was in office, former President Donald Trump rarely spoke publicly about capital punishment — but his administration put 13 people to death in seven months, an unprecedented shift after 17 years without any federal executions. The spate of executions was only the most visible of the steps Trump’s Department of Justice took to preserve and expand the death penalty — not just in the federal system but also in the states. Some of those changes would be easy for Biden to walk back, but neither the White House nor the DOJ responded to repeated requests for comment on the administration’s plans. The White House has also given no hint as to whether Biden might spare the lives and commute the sentences of the roughly 50 prisoners on federal death row to life in prison, as civil rights groups and Democratic lawmakers have been pushing. But recent DOJ filings in a little-known court case involving the state of Arizona suggest there may be other changes afoot.

The boldest change would be to abolish the federal death penalty, which would require an act of Congress. Some lawmakers are already considering that, but in the meantime, there are other ways Biden could undermine Trump’s efforts to reinvigorate capital punishment. The new administration could reverse course on Trump changes that authorized firing squads, reduced the amount of notice given to prisoners before their executions, made it easier for prisons to get lethal injection drugs and opened the door for states to limit appeals and execute people more quickly — the policy in question in the Arizona lawsuit.

“There are so many things the Biden administration could do to remedy these egregious policies that have led to the wrongful executions,” said Elsa Alcala, a former prosecutor and long-time judge in Texas who now opposes capital punishment. “I’m optimistic he is going to step in and right some of these wrongs from the last administration.”

One of the first clear steps the Trump administration took to revive the death penalty came in 2019, when lawyers for the DOJ decided the Food and Drug Administration could not regulate execution drugs or devices. That’s because the FDA is supposed to make sure things are safe and won’t kill people, but with lethal injection drugs that’s the whole point.

“The articles used in capital punishment are intended to cause death — for some articles that is their sole purpose,” DOJ lawyers wrote at the time. “To approve a substance for use in a lethal-injection protocol, then, FDA would have to find that clinical trial data established that the substance was ‘safe’ for executions — that is, that the harm inflicted by the product would be ‘offset by the possibility of therapeutic benefit’ to the inmate.”

That decision came amid a yearslong dispute over execution drugs, and after the FDA confiscated thousands of vials of unapproved sodium thiopental, which two states — Arizona and Texas — tried to buy from an overseas supplier in 2015.

Texas sued, fearing the seizure could close off a channel for getting lethal drugs in the future. (The state has found supplies to continue carrying out executions.) Once Trump took office, DOJ attorneys repeatedly said they were trying to resolve the suit “internally.” The case had fallen dormant by the time the department issued the 2019 legal memo saying it had determined the FDA was not allowed to regulate execution drugs anyway.

“Since then, it’s unclear if states have tried to import drugs or if they intend to import drugs,” said Megan McCracken, a lawyer who specializes in challenging methods of execution. Though the Justice Department doesn’t typically withdraw legal memos, officials could issue a new one with a different position, she said. “Then that potential avenue for obtaining drugs could be cut off.”

After the Trump administration started scheduling death dates in 2019, officials began tinkering with the Bureau of Prisons’ execution protocols. First, then-Attorney General Bill Barr announced that he’d directed the Bureau of Prisons to alter its protocol so the execution teams could use one drug instead of three. Then, DOJ lawyers said in a court filing that the government had rejiggered the procedure again, this time so officials would not have to give condemned prisoners nearly as much notice before executing them.

That time crunch made it harder for lawyers to file final appeals for their clients, which Emily Olson-Gault, a staff attorney at the American Bar Association, said can increase the chances of wrongly executing someone who’s innocent or severely mentally ill.

“Any time the legal process is cut short in a criminal case, it undermines confidence in the integrity of the system as a whole, and never more so than when a person’s life is at stake,” she said.

Because changing the federal execution protocols was an internal decision of the DOJ, revising them again wouldn’t require Congressional approval.

Just before leaving office, the Trump administration pushed through a “midnight regulation,” a last-minute rule change that allowed the federal government to use firing squads or the gas chamber as a means of execution. By the time the new rule took effect in December, it was clear the government would not need to use these methods for the three remaining executions it had scheduled.

Now, it’s not difficult for the Biden administration to clear the administrative hurdles needed to undo the regulation. Such a change would become less urgent if Biden doesn’t pursue execution dates, but death penalty opponents worry a future administration could take advantage of Trump’s rules if they are not reversed.

“The manner of execution is irrelevant if you’re not carrying out executions,” said Robert Dunham, director of the nonprofit Death Penalty Information Center. “But when a storm has made a mess of your home, the best thing to do is to clean it all up.”

The Legal Highway to Executions

Of all the things Trump and his Department of Justice did to quietly solidify the death penalty in America, the one that could have the broadest impact involves a complex legal maneuver that would speed up death row appeals in individual states, creating what one lawyer has described as an “express lane to death.”

Most aspects of death sentences meted out by states don’t fall under Washington’s jurisdiction. But toward the end of the process, condemned prisoners can file appeals in federal courts, as a safeguard to make sure a state’s legal system hasn’t violated the prisoners’ constitutional rights.

There are clear timelines for defense lawyers to follow, but two states — Arizona and Texas — spent several years begging the federal government to let them “opt-in” to an obscure provision in federal law that would drastically cut those timetables and limit what sorts of claims death row prisoners can file in federal court.

The final decision on whether the states could “opt-in” fell to the U.S. Attorney General, and the Obama administration did not approve either state’s request. But once Trump took office, the DOJ revisited the requests and approved Arizona’s. Defense lawyers worried that other states would follow suit and that the changes could even be retroactive, suddenly rendering prisoners who should be able to file appeals eligible for execution. (The Texas request is still pending.) Last summer, death row lawyers sued, saying Arizona didn’t qualify because the state hadn’t done enough to make sure prisoners got good lawyers earlier in state court.

“We promised people on death row we would give them adequate representation and we did the opposite,” said Michael Laurence, a California-based capital defense lawyer who has followed the “opt-in” controversy closely for years. “These procedures will guarantee that people who are innocent will be executed.”

The Trump administration fought the lawsuit. So far, Biden has not made clear exactly what he will do, but the DOJ has signaled it may take a different approach. Last month, days before scheduled oral arguments, prosecutors asked for more time to reconsider their position and make sure it “reflects the present position of the Attorney General.”

The new attorney general, Merrick Garland, was only formally confirmed this week, so it’s not clear how his leadership might shape the government’s positions on capital punishment. During his last run at the DOJ, he prosecuted the death penalty case against Oklahoma City bomber Timothy McVeigh, but this time around, he’s already expressed concern about the use of the federal death penalty.

During his confirmation hearings, he indicated the administration might follow the same de facto moratorium that Obama did. But federal public defender Shawn Nolan, chief of the Pennsylvania office that has 11 clients on death row, said he hopes for more.

“One of our biggest concerns is if he doesn’t commute the remaining people on federal death row, in four years we would be right back where we were,” he said.

“A moratorium is not good enough. We need more than that.”