A COVID-strained social safety net. Entrenched distrust between cops and communities of color. "2020 was a tinderbox." 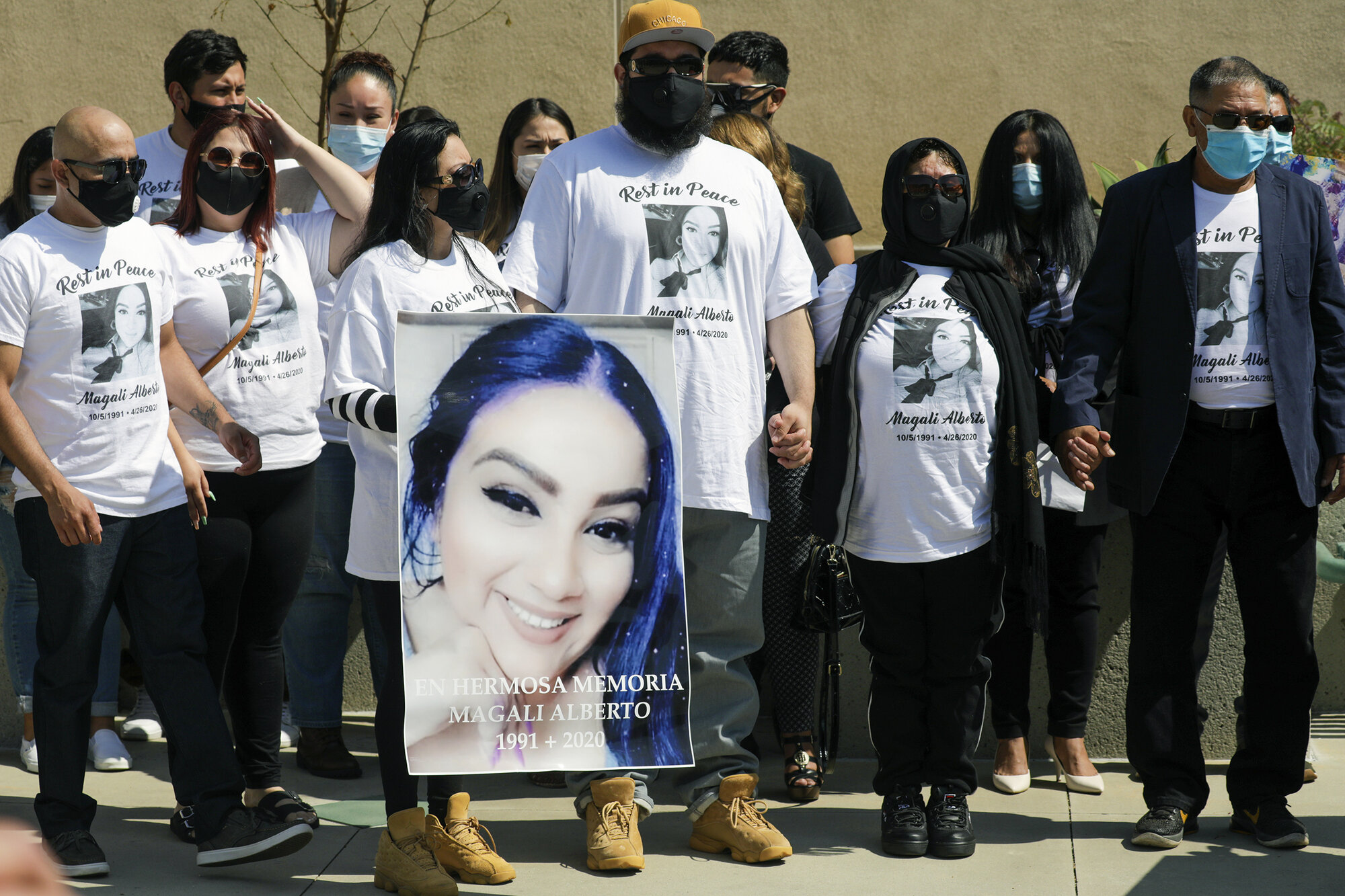 Family members of Magali Alberto, who was shot and killed at a traffic light, at a press conference held by the Los Angeles Police Department on May 28, 2020. Irfan Khan/Los Angeles Times, via Getty Images
By Weihua Li and Beth Schwartzapfel

On April 26, 2020 Telish Gardner, a 49-year-old sanitation worker and father of four, was shot and killed in his home in south Los Angeles. Two days later, just a few blocks away, Magali Alberto was killed in her car waiting for a light to change when three young men drove up alongside her and fired multiple shots into her tinted windows. Police say the 28-year-old single mother was randomly targeted.

Gardner and Magali’s murders last year were two of four in a census tract just shy of a half-square mile, where Black and Hispanic residents make up over 95% of the population. In 2019, the same area saw only a single murder. Despite a statewide stay-at-home order, Los Angeles recorded 332 killings in 2020, a precipitous jump — 95 more lives lost to murder than the year before, according to the city’s crime data. Almost all of the increase in homicides took place in Los Angeles’ Black or Hispanic neighborhoods.

Across the country, other cities followed a similar pattern last year: a spike in murders, concentrated in Black and Hispanic neighborhoods, according to a Marshall Project analysis.

From 2019 to 2020, homicides in nine U.S. cities rose by 722, according to police data. More than 85% of the increase took place in predominantly Black and Hispanic neighborhoods, where homicide rates were already higher than White and Asian neighborhoods.

All Cities
Atlanta
Baltimore
Chicago
Washington, D.C.
Dallas
Detroit
Los Angeles
New York
Philadelphia
Source: Demographic and geographic data from the Census Bureau; Crime incident data from each city’s police department.
* Some cities do not have any census tracts that are predominantly Asian or Hispanic. Analysis for Detroit's majority-Asian tracts were also excluded because the total population was under 5,000.

Since the national homicide rate reached an all-time high in the 1990s, the rate has declined overall, eventually dropping by half of what it was almost three decades ago. It’s too soon to say whether the homicide surge in 2020 marks a turning point in that trend. Violent crime can fluctuate from year to year, and it will take months or years to know whether the rise was temporary. But experts say a strained social safety net, rising tensions, physical proximity and mistrust between police and communities of color played important roles in driving up murders last year. Law enforcement officials and officers attribute the spike, in part, to a paralyzed criminal justice system and a shift in public attitudes toward policing that have made it harder to do their jobs.

“2020 was a tinderbox,” said Fernando Rejón, who heads the Urban Peace Institute, a violence prevention and social service organization in Los Angeles. “The multiple crises have exposed the public health gaps and the public safety gaps that have existed for generations.”

As COVID-19 raged through Black, Hispanic, Asian and Native communities, the devastation went beyond the disproportionate death toll, experts said. Lost jobs or wages have been concentrated in communities of color when businesses shut down. Schools, recreation centers and after-school programs have been shuttered in neighborhoods that need them most. Mentoring, counseling, prison and jail reentry programs and conflict mediation programs have scaled back, gone remote, or spent precious bandwidth filling other gaps like handing out PPE or passing out food.

John Roman, a political scientist who studies crime control policies at NORC at the University of Chicago, said tensions rose in 2020 due to “a lot of concentrated trauma, a lot of ill will and resentments and unsettled disputes.” Because of lockdowns, “you’re home and idle, and the people you have disputes with are home and idle, and they’re right there, a couple blocks away.”

“What used to be settled before with, ‘Hey, turn the music down, I’ve gotta get some sleep,’ can now turn into a shooting or a stabbing,” said Guillermo Cespedes, chief of the Department of Violence Prevention in Oakland, California. “Everyone is very brittle.”

The pandemic coincided with the death of George Floyd and nationwide protests against police brutality at a scale not seen in a generation. What fragile trust existed between Black communities and the police was further frayed. Activists, scholars and police officials all say that the erosion of trust in police leads fewer people to report crimes — even when they are the victims — and less willing to act as witnesses when crimes are committed.

“When an officer goes into the community to try to stop somebody or investigate, instantly the camera goes up,” said Crystal Coleman, a retired Philadelphia homicide detective who now heads the Guardian Civic League, a Black officers’ group in the city. “They’re having a hard time making arrests because of these issues. They’re second-guessing themselves, scared that they’re going to do the wrong thing.”

Some within law enforcement blame the spike in murders, in part, on “efforts to decrease jail populations during the pandemic,” as a spokesperson from the Metropolitan Police Department of the District of Columbia said in a statement emailed to the Marshall Project. However, there is little evidence that draws a direct link between mass jail releases and a rise in violent crime.

In addition, police officials say that budget cuts and police reforms since the death of Floyd took away tools used to fight crimes. In the wake of massive police protests in Los Angeles, “the proactive policing was put on a halt — going out there and trying to make vehicle stops and trying to put bad guys in jail,” said Ralph Campos, a Los Angeles Police Department (LAPD) officer currently on leave with the Los Angeles Police Protective League, the officers’ union. Campos says a decreased police presence on the streets translates to more violence. “Everyone in the community, they know when the police are out, and the police are not out.”

The surge of homicides in Black and Hispanic neighborhoods risks inflaming long-simmering tensions between these communities and those who police them.

Tiffany Gardner, the daughter of Telish Gardner, said there was a long delay before LAPD finally started investigating her father’s death because officers said they had to go to the protests that were sparked by George Floyd’s death. 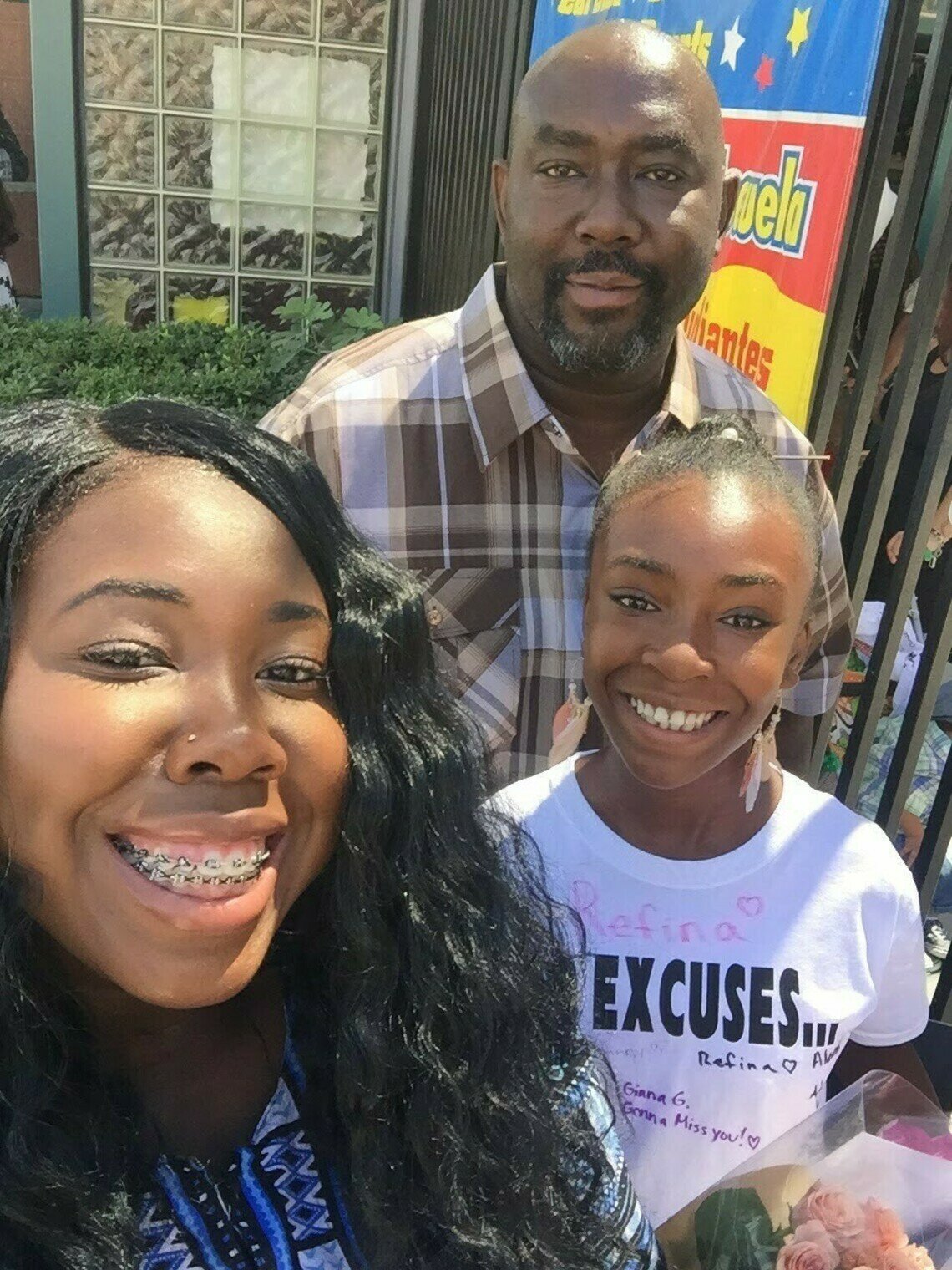 Telish Gardner, center, with two of his daughters, Tiffany and Scherrie Gardner, in 2016.

Gardner, 22, said she does not trust that the LAPD is taking her father’s murder seriously enough. Even though police say Telish Gardner knew his killer — the man was staying in his house and helping him remodel his kitchen — Gardner says they don’t even know the man’s name.

“Living in L.A. and being a person of color, I don’t think they really valued his life,” Gardner said. “In the back of my head, I do think, ‘Are you really trying?’”

The LAPD did not return requests for comment, but Campos, of the officer’s union, denies that police discriminate depending on a victim’s race. “Anyone who says a detective is not putting 100% effort because the victim is Black or Hispanic? I can’t even wrap my head around that.”

The national reckoning over race and policing presents a once-in-a-generation opportunity to re-imagine public safety, said Cespedes of the Oakland Department of Violence Prevention.

“We don’t know what the new version looks like, and the old version has been proven to have some deficiencies,” Cespedes said. He wants to see much more investment in basic community well-being, seeing violence prevention as more of a public health issue that affects every city agency, from transportation to parks and recreation.

“I don’t want to go back and implement the same programs that worked before,” Cespedes said. “We have to acknowledge the new normal. It’s a terrifying and an exciting time.”

This story has been updated to reflect John Roman's institutional affiliation.