‘I Have No Teeth’: Michigan Prisoners Say Long Wait to See Dentist Is Inhumane

In Michigan, getting dental care can take months, even years. 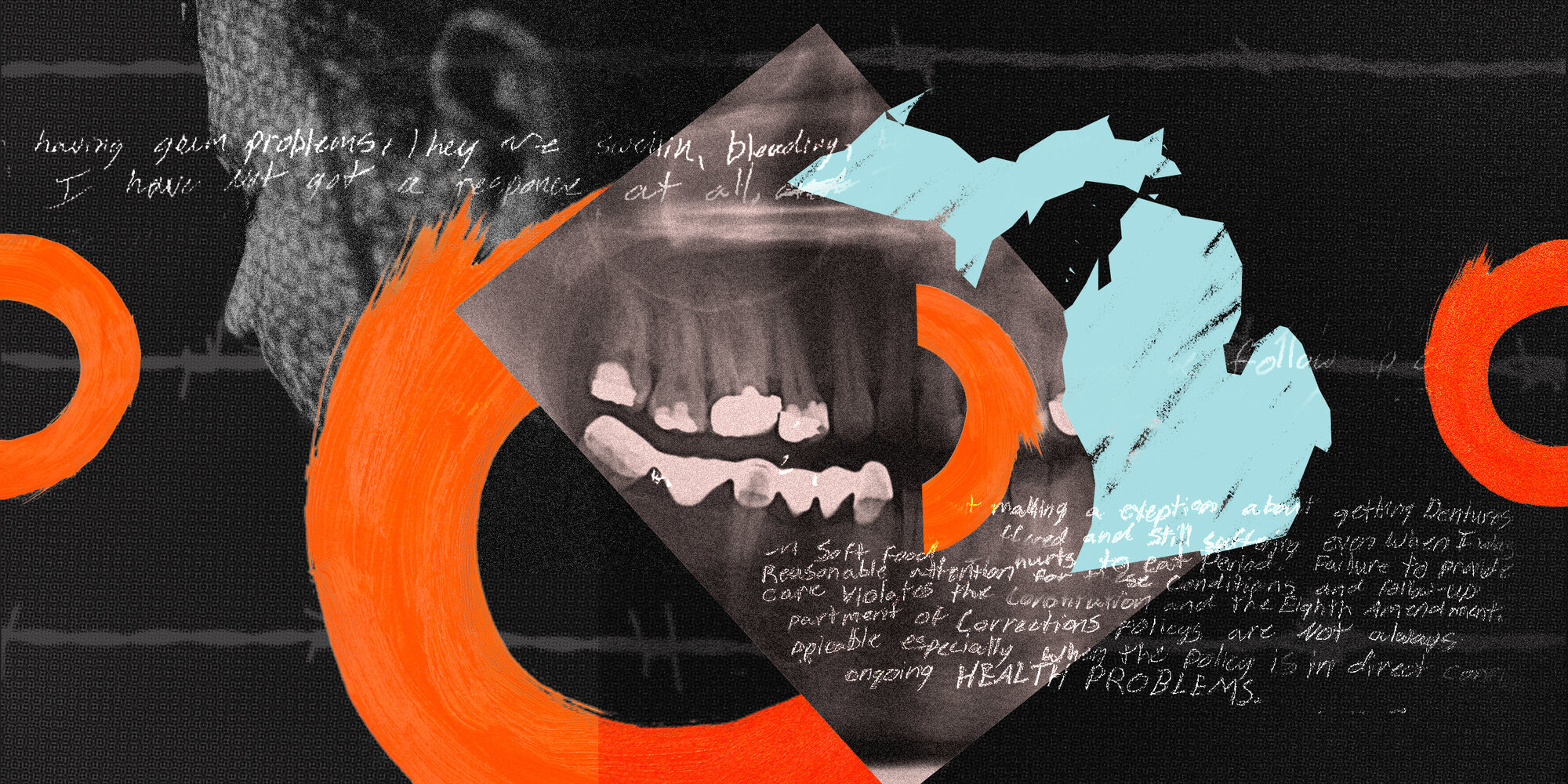 By the end of 2016, Nicholas Bailey had no teeth. A Michigan prison dentist had removed all of them because they were decaying.

“I’m in pain,” he wrote in a series of complaints to prison staff, begging for dentures. “I cannot eat because I have no teeth.”

But instead of giving him dentures, the medical staff gave him soft food and told him he’d have to wait, even though he said his gums were swollen and bleeding. That’s because, under the Michigan Department of Corrections policy, prisoners can get dental care during their first two years in prison only if the treatment is considered urgent — and being toothless does not count.

Even among prison systems that limit dental care, Michigan’s policy is an outlier — and one of many issues described in a years-long lawsuit over dental care. In court filings and interviews, dozens of prisoners complained that their decaying teeth were left to rot and ache. Some said they’d been pressured into having otherwise fixable teeth pulled, by practitioners who asked them to pick between living in pain and losing a tooth.

“Most people in society have at one point in time had some type of tooth pain, and they know how bad it can be,” said Daniel Manville, the Detroit-based lawyer who is suing the state’s prison system and its medical providers over dental practices. “But in a system where you have to wait two years for dental care, it’s barbaric.”

Michigan Department of Corrections spokesman Chris Gautz said the agency’s dental care does not violate the Constitution’s ban on cruel and unusual punishment and is “far better than what the majority of the prisoners received prior to entering prison.” He declined to comment on individual allegations in the pending litigation.

Though Michigan’s two-year wait is unusual, the reluctance to treat dental problems is not. Florida prisons won’t do crowns or bridges, and Texas routinely refuses to provide dentures, instead offering a diet of puréed mess hall meals. In the federal system, prisoners can’t get dentures unless their sentence is at least three years. In Nebraska — as in Michigan — the state used to have a policy banning new prisoners from routine dental care, though officials eliminated that rule after the ACLU of Nebraska filed a lawsuit. (The suit was later dismissed, and Nebraska officials said the policy change was unrelated.)

When I got arrested a little over a decade ago on a drug charge in upstate New York, I was blindsided by the lack of dental care behind bars. The county jail wouldn’t do anything about cavities, so the only choices for a bad tooth were to get it pulled or to live in pain until you were released or sent to state prison.

A few months in, while still in county jail, I cracked a molar and a big chunk of my tooth came off in my mouth. But when the guards put me in handcuffs and shackles and took me to a doctor, he said he didn’t want to pull a tooth that could be saved.

So the guards took me back to jail, where I filed useless requests to the nurse, writing long essays on the tiny forms and sketching little graveyards filled with teeth. I couldn’t believe they planned to do nothing, and I somehow hoped that my creativity would catch their attention.

It didn’t, but something else did: my family. I was fortunate enough to have parents who supported me by calling the jail and offering to pay for the $161 dental treatment themselves. A lot of lockups wouldn’t have allowed that, but the jail I was in agreed, and the guards took me to get my tooth fixed.

Not everyone was so lucky. A lot of the women I met when I got sent to prison had spent months in county jail without dentures or dental care.

In Michigan, Manville’s legal battle started after prisoner Robert Johannes lost a filling. When the prison dentist tried to replace it, the whole tooth broke off. Over the next few years, dentists kept pulling teeth until he could no longer chew — but, according to the lawsuit, the prison still refused to give him dentures.

After five nearly toothless years, Johannes sued in 2014. The complaint accused the prison system and medical providers of deliberate indifference, alleging dental staff had removed some teeth unnecessarily and ignored others that needed treatment. Instead of asking for money, the lawsuit just demanded better dental care.

But that is not what happened.

A few months before Johannes sued, Michigan prisons had created a new policy to cut down the 8,000-person dental waiting list — not by treating prisoners more, but by rendering many ineligible for treatment.

Now, new prisoners could not get any care considered “routine.” That meant no cleanings, but according to Manville and his clients, it also meant no fillings or dentures. If a cavity hurt too much, the dentist would tell prisoners they could wait at least two years for a filling — or just agree to an extraction right away.

Gautz, the prison spokesman, said the change was not an attempt to cut costs, but rather a plan to make sure that prisoners serving long sentences could get access to routine care. The state spends around $300 million a year on health care for about 31,000 prisoners, he said.

As more prisoners came forward with similar complaints, Manville added them to the case. There was the man who said medical staff told him to wait two years to get his broken tooth fixed, the man who couldn’t get replacement dentures after he said prison staff broke the ones he already had, and the woman who had 20 teeth pulled in two years and still couldn’t get dentures even though her gums bled when she ate.

In response to the lawsuit, the corrections department said prison dentists take care of urgent problems, and pointed out that overall they do more fillings than extractions. But, attorneys for the state wrote, “Being without a few, several, many or all of one’s teeth is not, in and of itself, an urgent dental condition.”

The case has now gone on so long that many of the original prisoners involved have been released, including Johannes.

The case probably won’t go to trial until next year. But for Bailey, some of the problems are now in the past: After three years of asking, in 2019 officials finally gave him what he wanted.

“I’m glad I got dentures,” he wrote in a recent email from prison. “I look more human with my teeth.”