Police Say Jiu-jitsu Can Make Them Less Violent During Arrests

But will cops training in martial arts lead to struggles that didn’t need to happen?

MARIETTA, Ga. — After a video of an arrest gone wrong went viral, Marietta police officer Stacy Fowler realized she was frightened of the next encounter.

This story was published in partnership with the Atlanta Journal-Constitution.

The video showed Fowler and three other officers confronting an increasingly agitated 39-year-old Renardo Lewis at an IHOP in March 2019. They grabbed his arm and pinned him to the ground. As the struggle continued, one officer used a Taser and punched him multiple times. The scuffle injured Lewis and several officers, including Fowler. Lewis is suing the city.

A week after the encounter, Fowler, then new to the force, found herself hesitating during an arrest of a much larger man, as he became agitated.

“I realized I needed more training,” she said. “I can't back out of situations like that.” 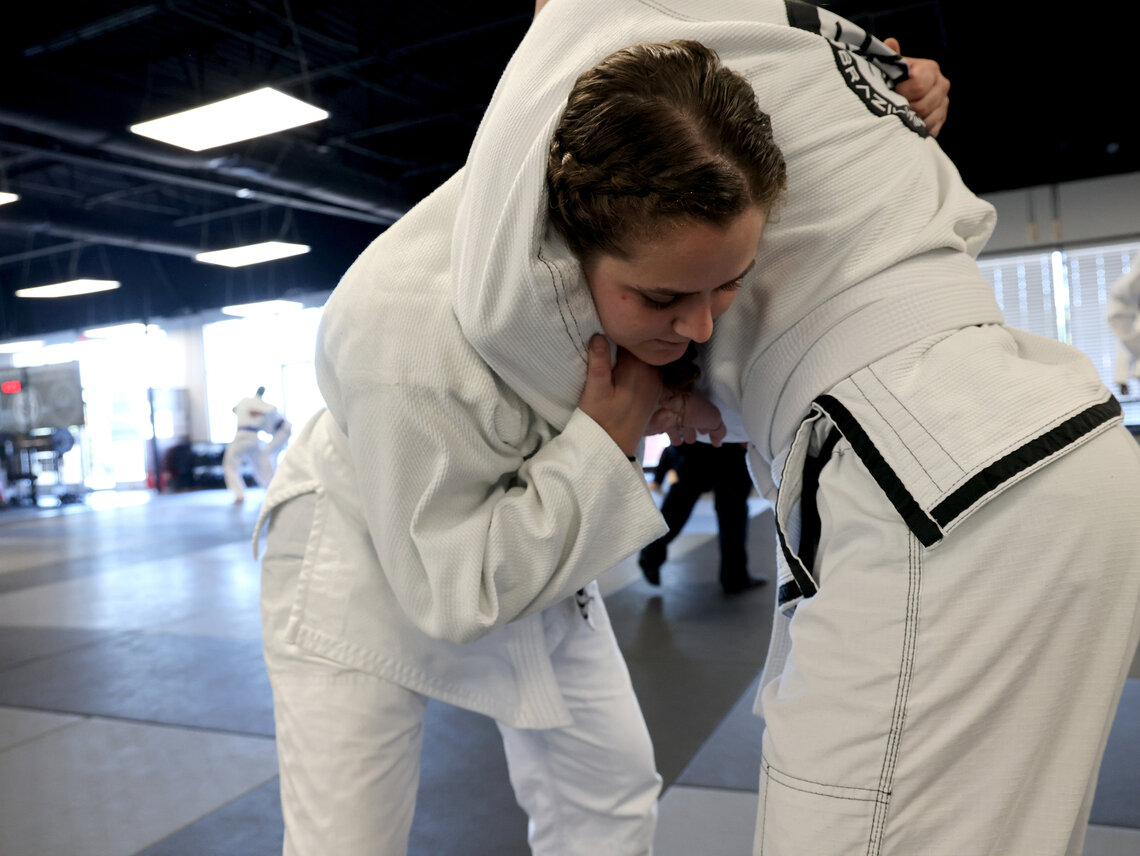 She and many of her fellow Marietta officers have turned to Brazilian jiu-jitsu, a martial art increasingly embraced by departments across the country. The aim is to lessen the use of deadly force by giving officers confidence and alternatives to guns, Tasers or fists. Jiu-jitsu involves no kicks or punches.

Marietta is at the forefront of the newfound popularity of jiu-jitsu among police. At least 15 departments reach out every week looking for help in starting jiu-jitsu training, Marietta officials said. A Michigan state lawmaker who wants to make the training mandatory for aspiring police officers turned to the Marietta department to help make his case. Five departments in the Atlanta metro area have launched programs this year.

Still, some civil rights leaders and activists say the training could help police officers dominate and harm the public.

“Law enforcement is missing the mark,” said Atlanta-area civil rights attorney and NAACP organizer Gerald Griggs. “They need to just be protectors, and not warriors in the community,” he said. “That doesn't necessitate them learning to become mixed martial arts fighters.”

The interest in jiu-jitsu follows protests sparked by the death of George Floyd, and subsequent police reform bills across the nation. While some activists want to cut police budgets or limit policing’s scope, many departments have advocated training in de-escalating violence.

Fowler says she’s found jiu-jitsu to be transformative. She believes she could have handled the IHOP encounter differently — though she wouldn’t rule out using force again.

“Looking back at it, we definitely could have de-escalated that situation if we had known different techniques to use,” Fowler said. “I'm not saying that we wouldn't have gone hands-on given the situation, but it could have not lasted as long, or have had to get as many people involved.”

New recruits of the Marietta Police Department in Georgia are required to train in Brazilian jiu-jitsu twice a week for at least six months before going on patrol. Videography and Production by Ryon Horne/Atlanta Journal-Constitution

Jiu-jitsu is a Japanese martial art popularized as a form of self-defense during the 1920s in Brazil and exported to the world by five brothers of the Gracie family, whose descendants loom over the sport today. The core principle is that a smaller, weaker person can use leverage and body mechanics to control a stronger, larger opponent. The term translates from Japanese to “the gentle art.”

Rener Gracie, who runs the “Gracie Survival Tactics” program, is the grandson of Helio Gracie, one of the five brothers who popularized jiu-jitsu in Brazil. His program is built on the belief that the neuroscience of stress leads to avoidable police violence. Gracie sees the value of jiu-jitsu as making officers — or any student — comfortable with physical confrontation, so that it takes a higher threshold of violence to trigger panic.

“Comfort with closeness is all we're really teaching,” Gracie said. “When an officer is in over his or her head, and they have a perceived or actual loss of control, everything goes down the drain.”

An officer who doesn’t feel threatened won’t need to yell, escalate, punch or Taser their way out of an encounter, he said.

“In jiu-jitsu, we do this every day. You can yell at me all you want, all I'm thinking in my mind is, ‘You're no threat to me right now,’” Gracie said. “And if you throw a punch, you're still no threat to me, because I'm going to lay you down and control you until my help gets here.”

Gracie’s father began proselytizing a version of jiu-jitsu for police officers shortly after the Los Angeles police beating of Rodney King in 1991. Gracie says demand for his training more than doubled in the year after George Floyd’s death.

That popularity concerns Marietta activist Kimberly Hartfield of the New Order National Human Rights Organization. She doesn’t oppose jiu-jitsu training per se, but cited reported ties of multiple Gracie family members to the far right. Rener Gracie and his training program have distanced themselves politically from relatives who expressed support for the Jan. 6 attack on the Capitol and who derided the Black Lives Matter movement.

Kyle Jones, who also works for the human rights organization, said he worries officers will be “itching” to try out their new skills. A former 12-year veteran of the DeKalb County Police Department in suburban Atlanta, Jones said “the program that they're doing is going to make officers more confrontational.”

Current Marietta officer Kenyon Jackson sees it differently. The five-year veteran has been doing jiu-jitsu for about a year. Unlike most of the other officers wearing the gym’s standard-issue white gi (the lightweight two-piece garment worn in martial arts), he has his own in black and red. This year, he earned his blue belt, and the 31-year-old Afghanistan War veteran called it one of the biggest accomplishments of his life. Jackson thinks there are physical confrontations with suspects that jiu-jitsu has helped him avoid, because he has the confidence not to escalate tense encounters.

“If I'm coming here for five rounds, four days a week and I can survive, then out there on the street is like ‘OK, relax’.” 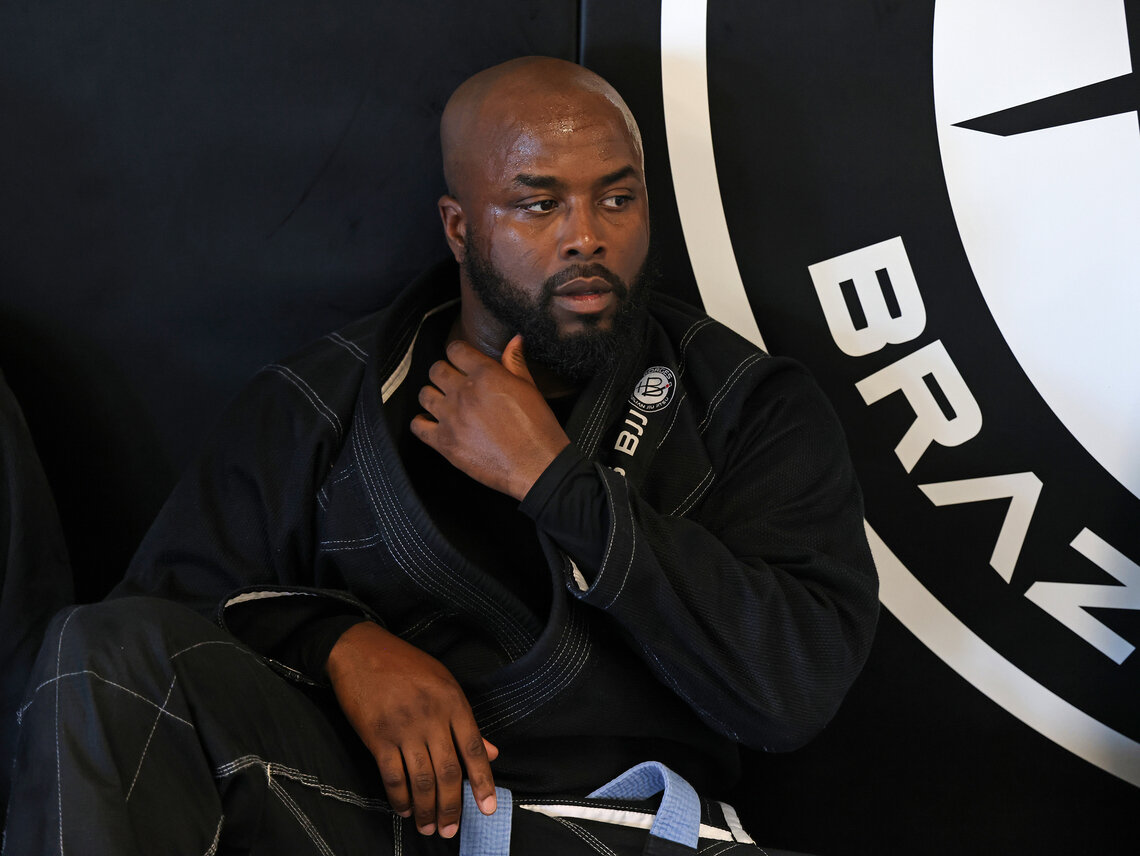 Marietta Police officer Kenyon Jackson training on Tuesday, October 19, 2021. He said jiu-jitsu has given him the confidence not to escalate tense encounters.

Marietta Police Maj. Jake King, a 20-year veteran of the force, noted that for many officers, “the first time they're ever in a real fight is when their life depends on it. What do you think the response is going to be? Normally it’s either incompetent or very, very violent.”

“The public does not like to see us punch and kick people,” he said. “They don't like to see it when we're cussing and everything appears to be chaotic.”

Jiu-jitsu has not been without controversy. In July, Nekia Trigg, 18, was restrained in Kaufman County near Dallas, Texas, after a 911 caller said a distraught Black teen was darting in front of cars. She was not running near traffic when a responding deputy used a jiu-jitsu move to pin her down after she pulled away from his grasp.

The Kaufman County Sheriff’s Office said the officer used the technique to avoid injury to both parties. The encounter involved no Taser, pepper spray, punching, kicking or cursing. But Trigg’s family and mental health advocates say being tackled and straddled by a police officer is an unnecessary, traumatizing response to a teenager in mental distress.

Pete Blair, a professor of criminal justice at Texas State University, is analyzing data from the Marietta department. Use of force incidents are trending down since the department made jiu-jitsu training mandatory for all recruits in April 2019. Because overall use of force in the department is fairly low (fewer than ten reports per month), Blair cautioned that even small, random changes can look big. Some of the reduction came as the pandemic limited police contacts with the public.

“The program looks promising,” Blair said, “but we need more data from other places before we argue that jiu-jitsu makes a big difference in uses of force and injury.”

The department says officers trained in jiu-jitsu are less likely to be seriously injured or to seriously injure others during arrest, but did not provide data to fully support that. A Marshall Project analysis of department data found that jiu-jitsu-trained officers were less likely to be injured during a use of force, but people who were the subject of police force reported injuries at virtually the same rate, regardless of officer training. The data did not include injury severity, so scrapes and bruises count the same as serious injuries requiring hospitalization.

King said jiu-jitsu helps to correct a training imbalance that favors firearms to the near-exclusion of everything else. In Georgia, officers receive three mandated days of training in physical combat and control skills in the police academy, with no more training required for the rest of their career.

King said the department hasn’t been involved in a shooting in six years, “but I guarantee we laid hands on someone today.”

One such case was the IHOP encounter, the department’s most public use of force in recent years.

Lewis, a longtime Marietta resident and business owner, visited the restaurant with his wife Lubreeze for some carry-out. The couple took issue with the customer service, asked for a number to call the corporate office, and an argument ensued, police records show.

An employee called 911 and reported that Lewis was making threatening gestures and said he was going to shoot restaurant patrons. Lewis’ lawyer and at least one eyewitness deny this.

The police arrived. Bystander video shows one officer grabbing Lewis’ arm, and Lewis yanking his arm back, triggering a loud, chaotic scuffle. Lewis said in an interview that at this point he was just confused, because it wasn’t clear that he was under arrest, or even why he would be. Four officers, including Fowler, were involved.

Lewis was booked on charges that were later dropped. He spent a month in jail because he could not afford bail. He lost a tooth and suffered head injuries in the scuffle. The officer who initiated contact during Lewis’ arrest resigned in early 2020 after being reprimanded for submitting false time sheets.

To Lewis and his lawyers, the issue is not arrest techniques, but police attitudes.

“The presumption that jiu-jitsu leads to fewer injuries would almost require that we look at the circumstances surrounding Mr. Lewis's incident like he was doing something wrong,” said Kamau Mason, who is representing Lewis. “The idea of equipping or continuously training officers, who simply have the wrong mental capacity, in an additional form of martial arts does not help the community at all.”