Inside the Underground Economy of Solitary Confinement

Goods are scarce in any correctional facility, but the circumstances are especially dire for those in isolation. Here’s how people in “the box” use their ingenuity, collaboration skills and a form of “fishing” to get what they need. 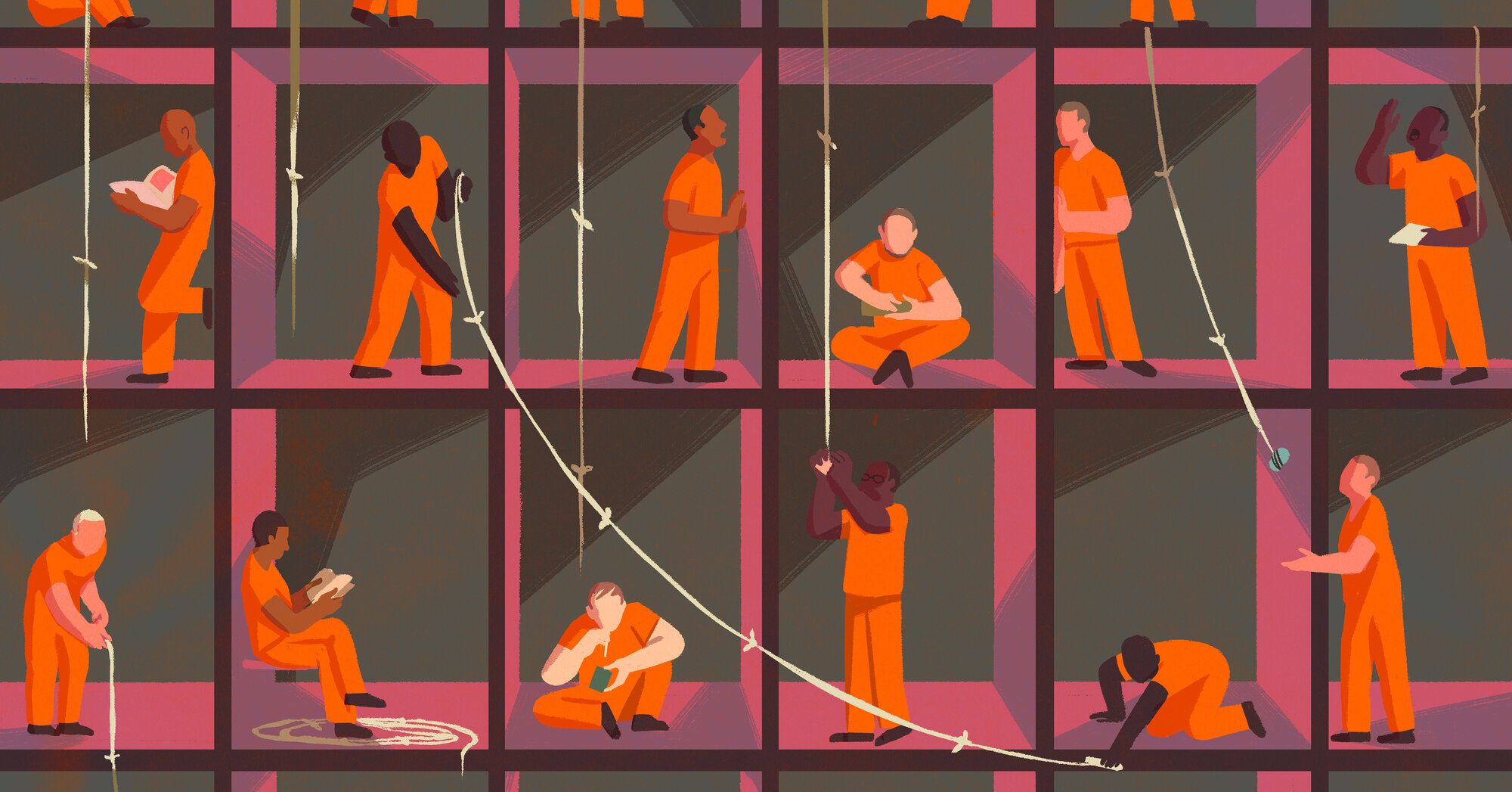 Cornelia Li for The Marshall Project
By Matthew Azzano
Perspectives from those who work and live in the criminal justice system. Sign up to receive "Life Inside" emailed to you every week.

Any prisoner can tell you that a peculiar economy exists behind bars. Items like cigarettes serve as dollar bills in transactions involving anything from food to toilet paper. Goods are in short supply in any correctional facility, but the circumstances are especially dire for those in solitary confinement.

I became interested in how people in New York’s so-called Special Housing Units (SHUs) buy and sell their goods while I was serving a two-year sentence for burglary. In 2019, armed with a reporting grant from Solitary Watch, I interviewed 15 New York state prisoners who had spent at least one month in a SHU. I did not directly quote or identify the men I interviewed because parts of this economy are illegal. But what I learned overall is that captivity breeds impressive displays of creativity.

To understand how the prison economy works in what we call “the box,” you have to know how the SHU is laid out. In New York state prisons such as Sing-Sing, Greene or Wyoming, most people in isolation live in massive cell blocks separate from the general population (GP). In a SHU, there can be 200 cells stacked multiple tiers high. These cells are rarely larger than 6 feet by 8 feet, and two men often share them. For months — even years — people in the box are confined for 23 or 24 hours a day.

Viewing the SHU from outside, you don’t see the cells themselves, but rather the attached “recreation” pens. A rec pen is essentially an outdoor cage connected to a cell by a door. When the doors unlock for recreation time, prisoners can walk out into the pen, but they remain fenced in by metal bars.

Rec time is a clamorous affair, as men shout to each other from one side of the SHU to the other. Some guys are having everyday conversations. Others scream obscenities and threats just to hear their own voices. They are literally bored out of their minds. Amid the cacophony, people call out what they are trying to sell or buy. These messages run the risk of getting lost from one cell to the next. To improve what resembles a game of Telephone, people enlist intermediaries to communicate.

Commissary is extremely limited in solitary confinement. Only after many months of good behavior may a SHU prisoner gain the privilege to buy food. Even then, they are limited to small snacks. For the vast majority of people in the box, their only commissary purchases are hygiene products and stamps.

Stamps are a major form of currency in the box because virtually everyone needs them, and they are small, concealable and easy to transport in any quantity. The most notable product missing from solitary confinement commissary is tobacco. Going straight from smoking regularly in GP to being isolated and empty-handed in solitary, many prisoners’ first question at the rec pen is, “Who’s got the ‘bacco?’” Accordingly, rolling papers, matches and lighters are valuable as well.

The men I interviewed told me that the most common quantity of tobacco is an empty sugar packet’s worth or an “s.p.” Guys harvest the small paper envelopes from their breakfast trays. With an average price of $3 to $5 — or six to 10 stamps — an s.p. of tobacco is enough for three cigarettes. An entire pouch of tobacco, which can fill about 30 cigarettes, costs less than $4 on commissary in GP. In the SHU, the potential margin for profit is very large if you can successfully carry tobacco into the unit.

Pornographic magazines are another major commodity in the box. Some issues have been in solitary confinement for longer than most of the prisoners. Ripped and missing pages, they look about as sad as the men who hold them. Although trading one-for-one is the usual method for acquiring new skin mags, occasionally someone will pay $10 for one in very good condition.

Food portions tend to be relatively small in solitary. Most of the men I interviewed said they received less food in the box than they did in GP. For example, they said they got one cup of rice instead of the usual two. To get by, they traded food off their trays. Some swapped out items they didn’t like; others bartered to support their tobacco habit.

Given that boredom is just as dangerous as hunger in solitary confinement, some of the guys used what they traded to make a confection known as a “box pie.” To prepare a box pie, a prisoner collects the white bread from his meals and pounds the slices together until they resemble the dough of a pie crust. They fill the “crust” with sweets accumulated from dinner trays and press the whole thing flat. Some use apple and banana slices, but desserts such as brownies, cakes and apple crisp are especially sought-after fillings.

Whatever you’re buying or selling, you must learn how to “fish” to participate in the solitary economy. Fishing lines are made of ripped strips of sheets, towels and clothes. With thin enough strips, you can make about 100 feet of line out of a single state-issued bedsheet. To fish, you attach the item you’re selling to the line along with a weight, such as a bar of soap. When you toss the line toward your buyer, the weight creates the momentum needed to carry your item through the air and drag it into the right cell after it lands.

Of course, commodities can fall off the line or land in places where they can’t be recovered. Arguments can ignite over accusations of theft, so you need to know who you can trust to pass on your goods. In my reporting, I heard about one guy who didn’t have any family members on the outside to help him pay for basics like toilet paper. Thanks to his cell’s central location and his good aim and trustworthiness, he was able to support himself by securing other people’s lines. It started out as something he would do to pass the time, but he ended up getting really good at it. People would look out for him, sending him items in exchange for his help.

It is difficult to fully describe the restrictive conditions in which fishing takes place. The rec pen is just a small cage, and the space between the bars is a matter of inches. In units where the bars are too tight to fit one’s hand between them, people use a “spear” to throw the line. A spear is a magazine or newspaper rolled up so tight that it glides through the air. It serves the same purpose as a weight does. For those who are not yet adept at fishing, it can take dozens of tries just to connect to someone a few cells down.

But the limitations make prisoners’ proficiency all the more fascinating. One man I interviewed described a guy on the third tier shooting a line to the ground level. He said the item landed on the floor and slid underneath his target’s door more than 100 feet away.

Human survival has always depended on our ability to cooperate creatively. In adverse situations like solitary confinement, you literally have to think outside the box. While this economy is made up of very basic commodities that are exchanged with the help of very simple tools, it’s quite complex.

Between state and federal prisons and local jails, about 2.3 million people are incarcerated in the United States. On average, close to 4% of them are held in solitary confinement. Cell bars and fishing lines may seem a world away, but are in fact a part of daily life for a considerable number of Americans.

Matthew Azzano, 24, was born and raised in Rochester, New York. After serving two years in New York prisons, he is completing a bachelor’s degree in urban planning at Buffalo State College, where he also plays on the rugby team. He enjoys exercising, cooking and practicing Spanish. He reported for this essay through a grant from the Solitary Confinement Reporting Project.

In response to claims that prisoners in SHU were receiving less food and trading items by “fishing,” a spokesperson for the New York Department of Corrections and Community Supervision wrote that “incarcerated individuals in SHU are provided the same type of meals available in general population” but that some are “placed in a special management meal — which must still be sufficient in quantity of wholesome and nutritious food — if the individual is found to waste food by throwing it.” They also stated that the “exchange of unauthorized items between incarcerated individuals in this, or any manner, is not permitted.”