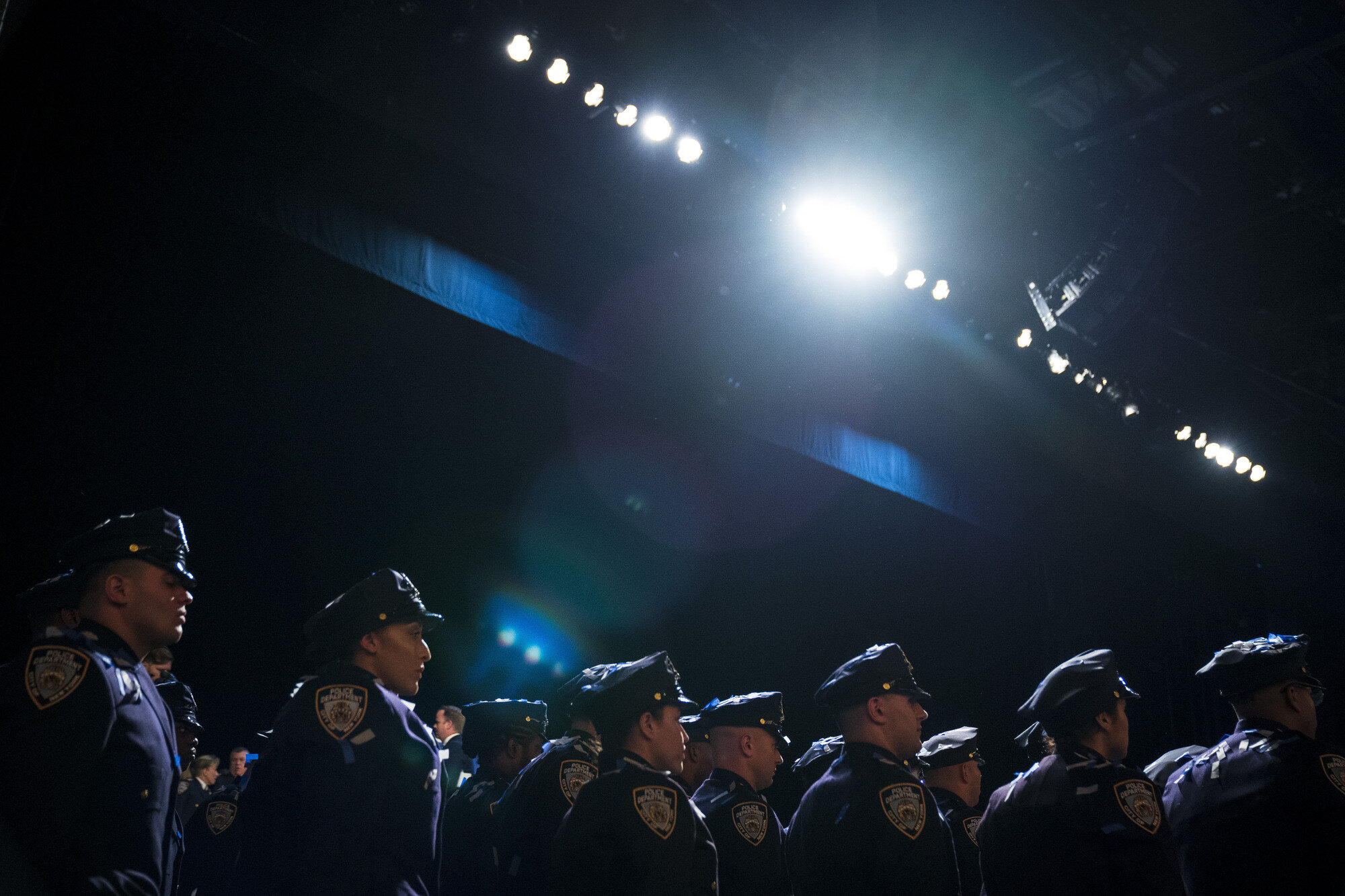 Police officers in New York in 2018. Former President Donald Trump’s executive order for police reform set rudimentary requirements, so most police agencies had to change little or do nothing to comply. Drew Angerer/Getty Images
By Jamiles Lartey

An early draft leaked in January, and some Republicans painted it as an effort to “defund the police.” Shortly thereafter, The New York Times reported that some law enforcement groups were so troubled by the draft that it could create an “irreparable rift” between the administration and police — at a time when the GOP was already increasing its attacks on Democrats as soft on crime, ahead of this fall’s midterm elections.

Biden’s policing order, which was slated for release during February’s Black History Month, has yet to come, and reportedly there is “no timeline” for any future release.

These stalled efforts mean that the most far-reaching federal policing changes after Floyd’s murder remain a mostly forgotten executive order signed by then-President Donald Trump in June 2020. Yet the Department of Justice has few measurable results, which observers say reflects both the limitations of Trump’s order — and of a president’s ability to change policing, which is mostly a local function.

Some advocates pushing for reforms are growing frustrated.

“Trump's order is not significant in and of itself, but it exposes how little Biden has done to deliver on his promises around this issue, and how quickly his administration has pivoted away from this movement for police reform that helped sweep them into office,” said Scott Roberts, senior director of criminal justice campaigns at Color Of Change.

Under Trump’s order, state and local police agencies must have specific policies on the use of force to receive certain federal grants. Department of Justice officials said that they are still enforcing aspects of Trump’s order under the Biden administration, and that approximately 8,500 law enforcement agencies — out of roughly 18,000 nationwide — have been certified for meeting the Trump standards. But in most cases, the requirements were so rudimentary that agencies had to change little or nothing to comply.

Trump’s order also instructed the Department of Justice to launch a national database to track excessive force by officers. That effort stalled during Trump’s tenure and has been placed on pause under Biden, said Shannon Long, a department spokesperson.

Presidents have limited control over what most of U.S. law enforcement does because the majority of policing happens at the state and local level. Generally speaking, federal policing reform — and criminal legal reform in general — comes down to incentives: the feds offering the carrot of grants and the stick of taking those grants away. Most police agencies have received federal money at some point over the last 30 years, according to federal data, but that makes up a very small percentage of local law enforcement budgets — limiting the carrot presidents can use.

The Trump order used this carrot/stick concept in a few ways. First, to be eligible for federal funds, police agencies had to have use-of-force policies that “adhere to all applicable federal, state, and local laws.”

Mark Ferguson, President of the Wisconsin Law Enforcement Accreditation Group, said it’s extremely uncommon that agency policies don’t already meet these criteria. “I've seen a lot of different agencies, policies, and procedures, and I've never seen one that is flat out in conflict with federal or state law,” Ferguson said.

After Trump’s order, the Department of Justice announced that individual statewide law enforcement agencies would be responsible for certifying departments, and in Wisconsin — one of the states most rocked by protest after the police shooting of Jacob Blake in August 2020 — the task landed with Ferguson’s group.

Ferguson, who is also the police chief in Glendale, a small city in Milwaukee’s suburbs, said in some cases, departments changed language in their policies to match state law more precisely, but the differences were semantic. “It basically meant the same thing,” Ferguson said.

Trump’s order also required agencies to prohibit the use of chokeholds, except “where the use of deadly force is allowed by law.” In Minnesota, ground zero for the protests of 2020, Trump’s order was rendered virtually irrelevant by the state’s own, more stringent guidelines.

“The fact is, our mandatory model policy on use of force meets those standards,” said Erik ​​Misselt, the executive director of the Minnesota Board of Peace Officer Standards and Training. Misselt said that since POST’s own mandatory use of force guidelines are stricter than the executive order, departments merely had to send a letter and request to be certified, and they received it automatically.

A Marshall Project review found that more than half of U.S. states have passed laws that limited police use of chokeholds, using language similar to — or in most cases, more stringent than — Trump’s order. For example, Trump’s order did not ban carotid neck restraints, when an officer puts pressure on a person’s neck to cut off the supply of blood to the brain. These maneuvers are often conflated with respiratory chokeholds, which involve putting pressure on a person’s windpipe to cut off the flow of air. Several state laws, like Minnesota’s, prohibited both restraints in their new regulations.

In Kentucky, Tennessee, Ohio and Michigan, where lawmakers have not passed chokehold restrictions, the Trump order’s standard on chokeholds was already law, thanks to a decision in the U.S. Sixth Circuit Court of Appeals.

Trump’s order did have an effect in some states, at least on paper. In Arkansas, where there was no statewide chokehold ban, the order pushed departments to add it to their use of force policies, according to Gary Sipes, executive director of the Arkansas Association of Chiefs of Police. He said several agencies borrowed use-of-force language from the association to comply. But Sipes added that the respiratory chokehold was also not something Arkansas officers were taught in the academy, calling it “pretty much forbidden” even before George Floyd.

The final piece of Trump’s order required the attorney general to create a national database to track officers who used excessive force — periodically publicly releasing some figures from it — and to only provide grant funding to agencies that submitted their data to it. That never happened.

As it turned out, something similar already existed in the private sector: a database of police officers who have been decertified, or stripped of their credentials, run by the International Association of Directors of Law Enforcement Standards and Training. The association’s director, Mike Becar, said that shortly after Trump signed his order, then-Attorney General Bill Barr asked for a demonstration of the database. “He liked it, and they gave us money to maintain and expand it,” Becar said.

The Department of Justice gave the association $1 million to expand its database to also include officers found to have used excessive force, whether they were decertified or not, so long as the officers had received due process. A spokesperson for the Department of Justice said work on the database has been on pause since September, to make the reporting requirements for police agencies more clear.

Despite the limited impact so far, Neal Rossow, the accreditation director for the Michigan Association of Chiefs of Police, said Trump’s order could ease the path for policy changes in the future. Rossow said that while the order set “way too low a bar,” it likely opened departments up to the idea of outsiders vetting their standards, and of meeting certain criteria in order to get federal money.

Under Biden, the Department of Justice has taken some steps on policing. Last year, the department restricted the use of chokeholds and no-knock police raids by federal law enforcement officers. Biden has also kept campaign promises to restart “patterns and practices” investigations of local departments accused of violating civil rights, and earlier this March re-launched a program for local police and the justice department to voluntarily collaborate on reforms.

Biden’s stance on policing has grown complicated in recent years. A stalwart law enforcement ally through most of his Senate career, Biden was one of the principal architects of the controversial 1994 crime bill, which, among other things, aimed to fund the hiring of 100,000 officers across the country. He campaigned forcefully on police reform in 2020, and has conceded that some of his tough-on-crime endeavors in the 1990s were “a mistake.” But he never adopted “defund” or other policy ideas that would radically reshape or pare back the size and scope of American policing. In recent months, as the Democratic Party has largely coalesced around rejecting the “defund” label, Biden has emphasized resources and training for law enforcement over accountability or the impact of policing on questions of racial justice.

Those policies were reinforced this week when the administration released its 2023 budget proposal, which would allocate more than $50 billion for law enforcement, with generous proposed increases across all categories.

Dr. Amara Enyia, a policy and research coordinator with the Movement for Black Lives, rejected the administration’s renewed emphasis on this approach. “We need to define safety in a way that encompasses the full scope of our existence in our communities,” Enyia said. “Safety is not just the number of police walking up and down the block.”

Enyia added that, while efforts like the George Floyd Act or presidential orders can be useful in theory, they usually slam into the inertia of a system not built for accountability.

Even if the database on excessive force were launched, Enyia said, the barriers that prevent that kind of abuse from being reported, investigated, and proven mean that it will often fall through the cracks. “It's designed,” she said of Trump’s order, “just to give the appearance, the facade of accountability.”