Burned to Death in a Prison Cell

After years of warnings about broken fire alarms, two men have now died in blazes at Texas prisons. 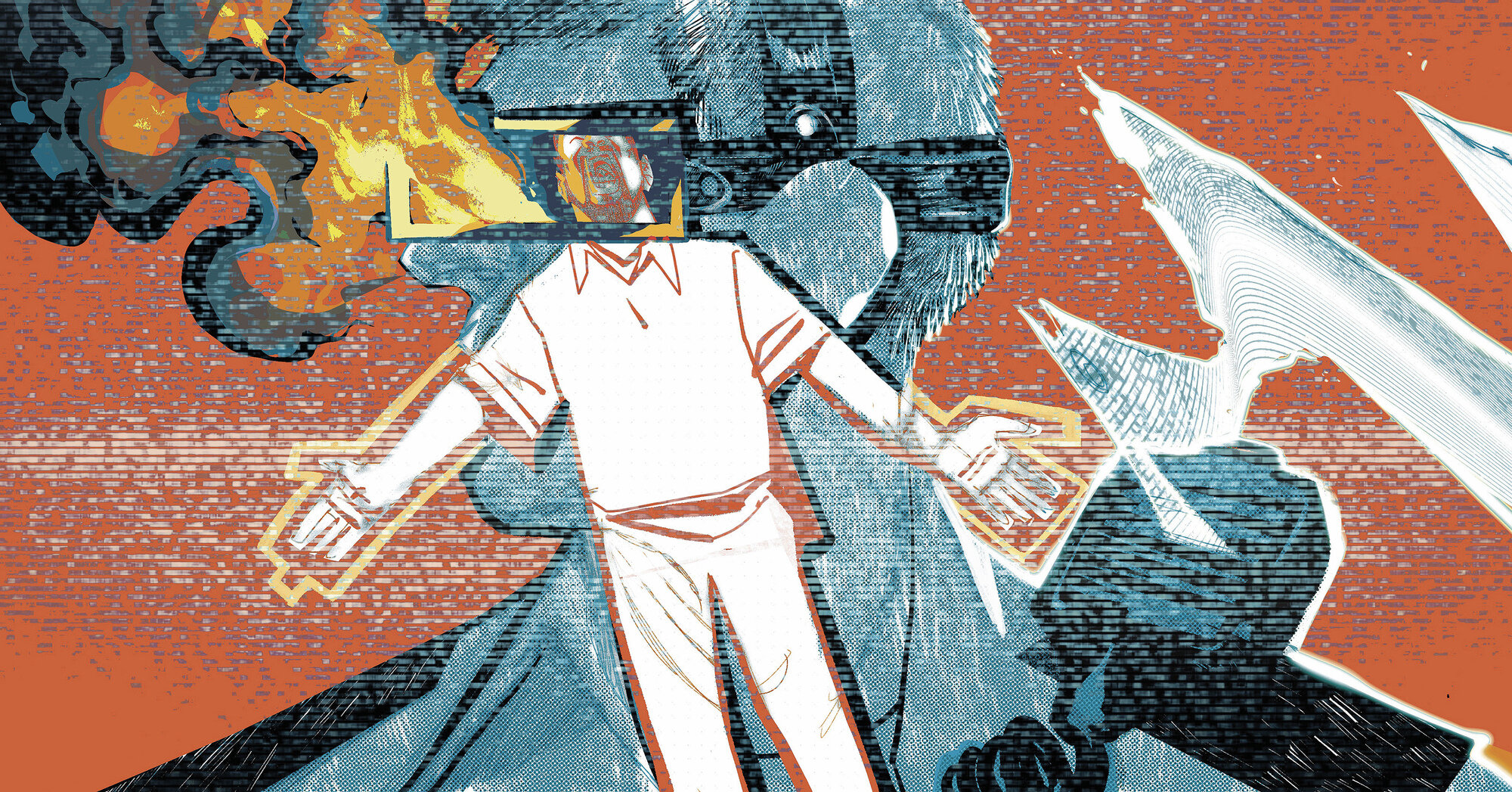 Chris Visions for The Marshall Project
By Keri Blakinger

The last time the other prisoners saw Jacinto De La Garza alive, he had his face pressed against the glass panel of his cell door, his mouth contorted and gasping for breath.

This article was published in partnership with the Houston Chronicle. Sign up for The 713 newsletter: the most important news around Houston and Texas in 5 minutes or less.

Black smoke curled around his head, they said, and flames leapt from the burning pile of clothes behind him.

The other men shouted and threw trash at the lone guard on duty, trying to goad him into action. 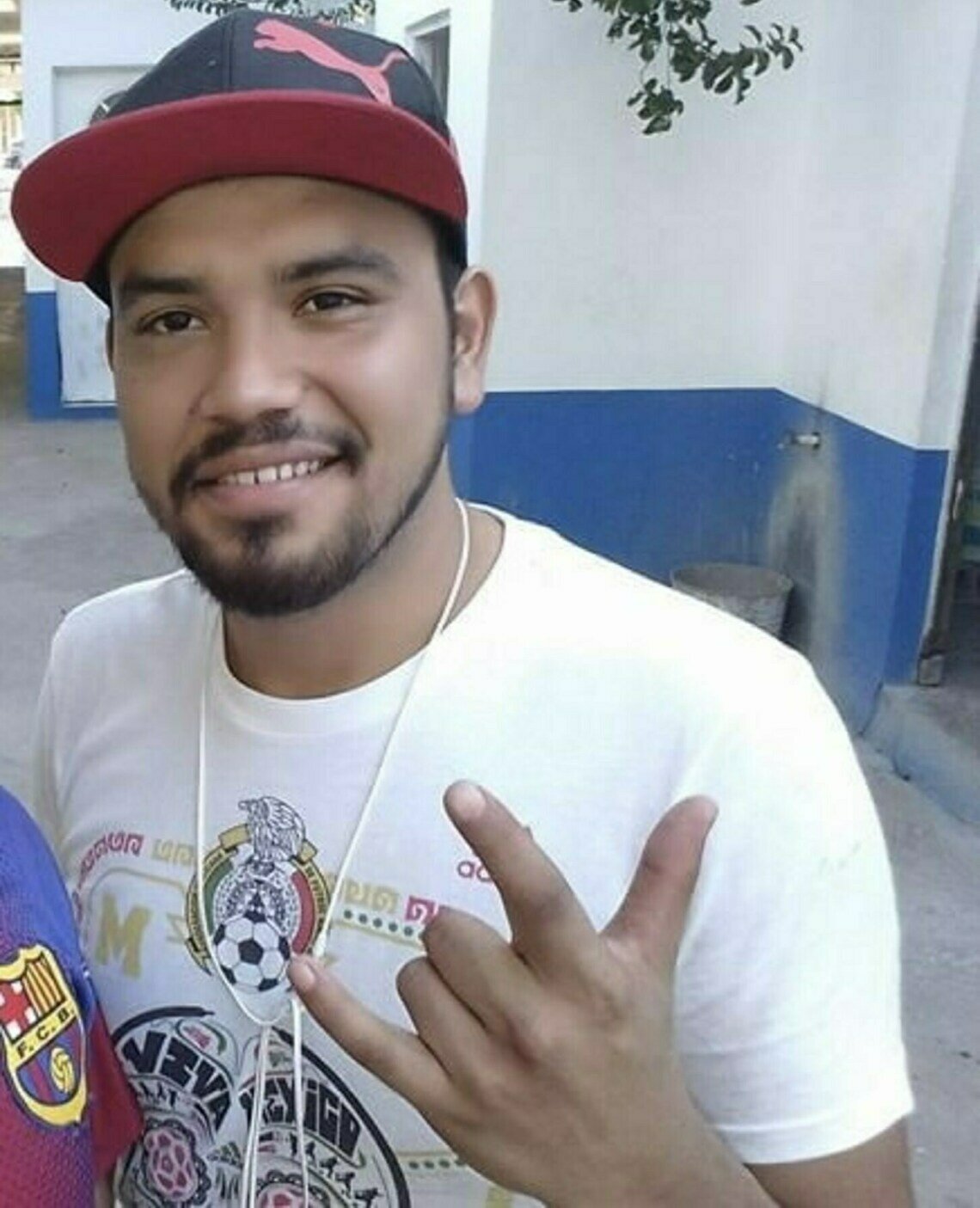 Jacinto De La Garza died in a fire at the Gib Lewis Unit, a Texas state prison near Woodville.

“Then, we didn't hear anything,” said Elijah Woods, who lived in the cell next door in a high-security section of the Gib Lewis prison in East Texas. Woods is among a half dozen incarcerated men who described the Nov. 11, 2021, blaze in interviews with and letters to The Marshall Project.

Prison investigators first described 26-year-old De La Garza’s death as a heart attack. But in a later report, they said that he died of smoke inhalation, trapped in his burning cell. His was one of two such deaths in the Texas prison system in less than six months. In March, Damien Bryant, 31, died in a cell fire at a prison 120 miles away; the corrections department said he may have been suicidal.

At some Texas lockups, cell fires are part of life behind bars. For years, prisoners and staff say, starting them has been one of the ways that men in solitary air their grievances when they can’t get medical attention, warm food or a chance to go outside for recreation.

But if the state had done its part years earlier, the deaths of De La Garza and Bryant might have been prevented.

For more than a decade, the Texas prison system has flouted state fire safety standards by failing to address inspectors’ concerns about inadequate alarm systems. Without sprinklers to douse a blaze or functioning alarms to force guards to respond, prisoners have said, fires in some housing areas have burned for hours.

The Marshall Project first uncovered the safety failings in late 2020, when men reported setting fires to protest deteriorating COVID conditions. A state report issued one month after De La Garza’s death shows that while the agency corrected some violations, it did not come close to fixing the problem, noting that “most of the fire alarm systems aren’t functioning properly.”

At Gib Lewis, the most recent fire safety inspection report — from 2018 — found that there were no sprinklers, the smoke detectors had not been maintained, and there was no power going to the fire alarms in many housing areas.

An agency spokesman confirmed that the fire alarm system there is still not functional in all housing areas. But he disputed that fire-equipment lapses played a role in De La Garza’s death. “Staff failed to follow policy or training,” Robert Hurst wrote in an email. “It was their level of complacency and not an equipment issue that resulted in the serious incident.”

There are a few ways to start a fire in a Texas lockup. Because lighters and matches are banned, prisoners repurpose wires from fans, radios and hot pots to create a heating coil, or they stick razors and graphite pencils into the outlets in their cell walls to spark flames. Then, they hold pieces of paper close by to catch the blaze. When the fires get big enough, they often toss the flaming balls of paper out of their cells to burn in common areas.

“Fires happen all the time,” Maurice Christie, who is also incarcerated at Gib Lewis, wrote in a letter. “It’s been going on forever — I started my first fire because the pill lady passed my cell and wouldn’t acknowledge me.”

Amid staff shortages and months-long lockdowns during the pandemic, some prisoners used contraband phones to share images of the fires with The Marshall Project. 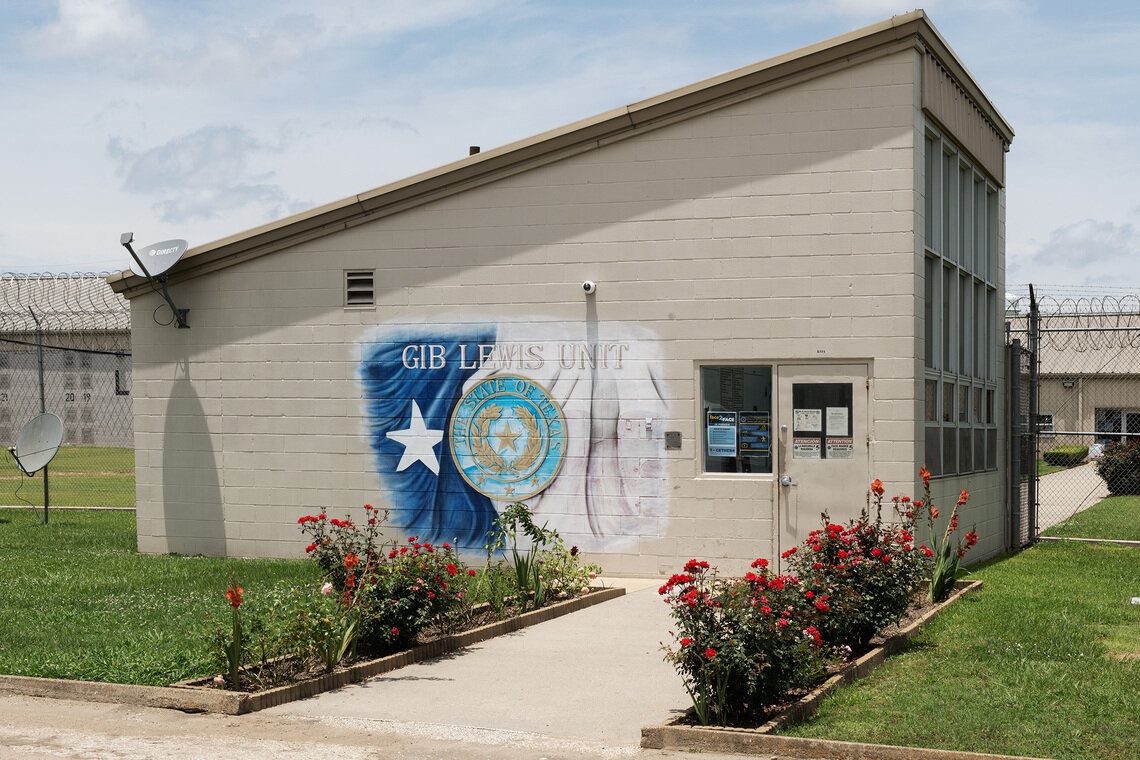 At Gib Lewis, the most recent fire safety inspection report — from 2018 — found that there were no sprinklers, the smoke detectors had not been maintained, and there was no power going to the fire alarms in many housing areas.

Eli Durst for The Marshall Project

Many states have fire safety systems in all areas housing prisoners. Of the 30 prison agencies that responded to The Marshall Project’s questions, 25 said there were alarms or sprinklers in housing units. Three states indicated that was true in most prisons, and one — Florida — refused to say.

Texas did not respond to questions about whether its fire safety systems cover all housing areas. Several prisoners laughed when asked if they’d ever lived in prison housing with working smoke detectors or sprinklers.

“That's not in our vocabulary,” said David Pedraza, who befriended De La Garza in his final days at Gib Lewis, which is on the outskirts of Woodville, south of Lufkin.

When De La Garza went to prison for aggravated assault in 2019, his family visited regularly, relatives said. But then the corrections department moved him further from their home in South Texas, and the pandemic shut down all visitation.

His letters home remained upbeat, but he was rarely able to use the phone, said his sister, Emily De La Garza.

“He would go months without him reaching out to us,” she said. Relatives began to worry he’d fall back into depression, or drug use.

Other prisoners all described him as quiet, but several said they noticed a change in early November. They watched him pace in his cell, talking to himself. Next door, Woods, heard him raging.

“He was beating on the steel bunk and toilet,” he said. “For three or four days this was going on.” 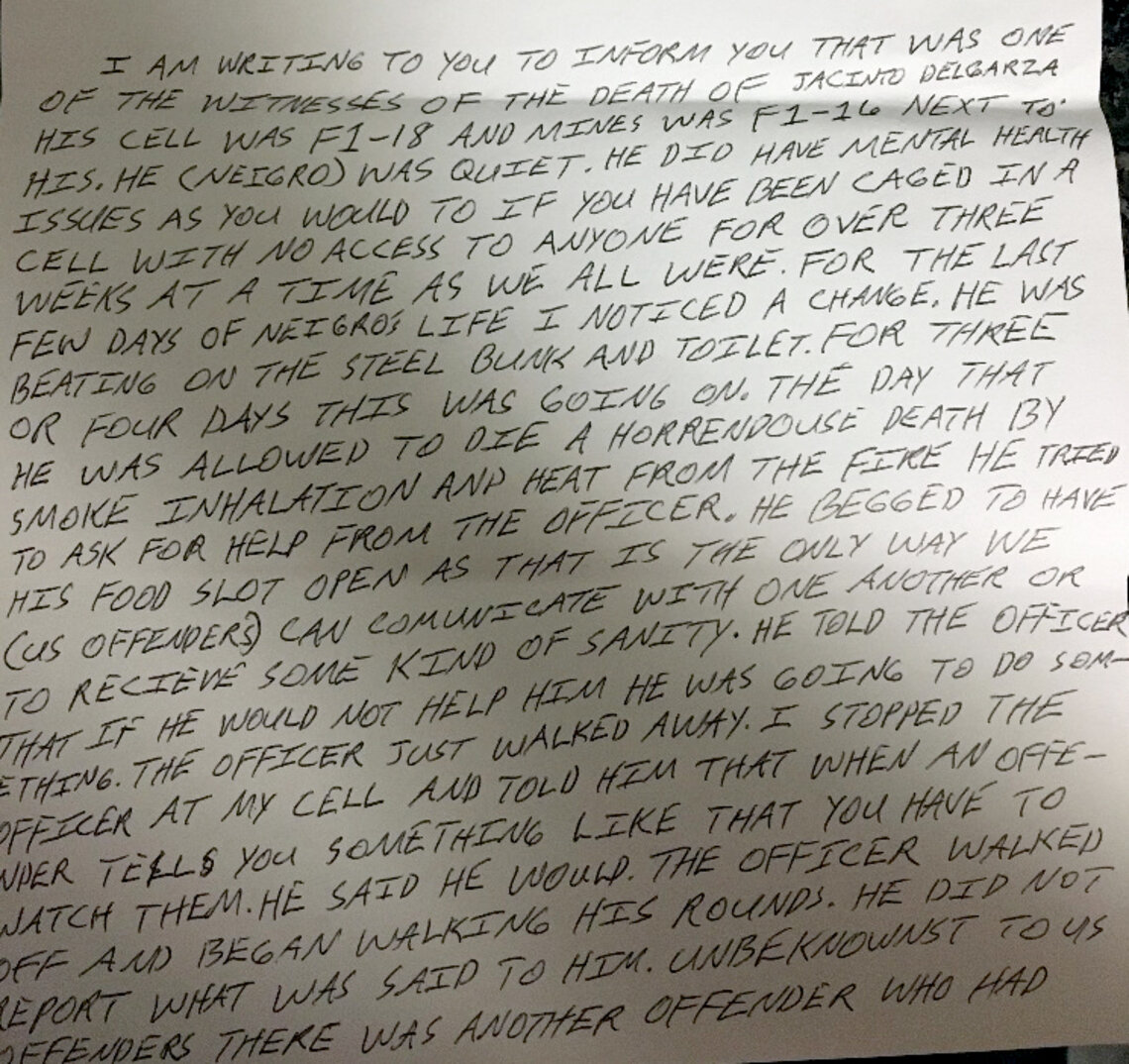 Elijah Woods, who lived in the cell next door to Jacinto De La Garza at the Gib Lewis Unit, was among a half dozen incarcerated men who described the Nov. 11, 2021, blaze in interviews with and letters to The Marshall Project.

It seemed that his neighbor was frustrated because he hadn’t been outside for days, Woods said. The prison, like many others in Texas, was understaffed, with almost half the guard positions unfilled.

The officer on duty — a new hire named Cody DeGlandon — said in an interview that De La Garza seemed agitated and paranoid. Eventually, the man threatened to set a fire if the officer didn’t get someone higher up to come down.

A little after 7 p.m., DeGlandon called for help, he said, but higher-ups told him to wait to see if the situation got more serious. So he turned his attention to other tasks.

The blaze started small, but then De La Garza added more fuel, tossing on his jacket and the stuffing from his mattress.

“The flames reached half the door and I couldn't see my friend anymore,” wrote Pedraza, who lived in a cell across from De La Garza. “When I no longer saw him at the door, I called the guard and told him he better do something to get him out of there, or I’d misbehave.”

The other men started shouting and banging. As the smoke grew thicker, Woods struggled to breathe in his own cell, he said. When DeGlandon noticed how big the blaze was, he said, he called again for help.

He was worried that opening the high-security cell without back-up could violate agency policies he’d just learned about during his six-week training. On the other hand, he didn’t want De La Garza to get hurt. “I was so concerned about making the right decision,” he said. “It was damned if I do, damned if I don’t.”

From the neighboring cell, Woods watched as Sgt. Danna Warren finally arrived, to see if the officers might open the cell door and save De La Garza.

But they did not.

“I don’t care if he dies,” Woods remembered hearing the sergeant say. Other prisoners and the guard had similar recollections. The sergeant could not be reached for comment. The agency said it could not confirm her remark.

By the time the sergeant left, Woods estimated, more than half an hour had passed since the blaze began and De La Garza remained trapped in the cell. Even as the flames died, the smoke kept swirling.

Panicked, DeGlandon poured buckets of water through the small gap at the bottom of De La Garza’s door. “I wish I could have done more,” he said.

For at least a decade, the State Fire Marshal’s Office has dinged Texas prisons for a “long history of noncompliance” with state fire safety standards. Last year’s annual inspection report found more than 1,600 violations, including the non-functional fire alarms, and no clear timeline for fixing them.

The corrections department also failed to install smoke detectors in many staff housing areas, had no records of inspection or testing for fire doors and had electrical violations in every unit inspected.

Prison officials said the agency plans to ask Texas state lawmakers for the more than $55 million in funding needed to tackle the remaining issues system-wide.

“Fire safety is one of the things that is so fundamental for prison officials,” said Michele Deitch, a senior lecturer in criminal justice at University of Texas at Austin. “You’ve got a trapped population with no ability to get them out quickly or easily.”

By the time DeGlandon called for help a third time and a lieutenant showed up with a team of officers, Woods estimated that some 45 minutes had passed. The guards opened De La Garza’s door, and smoke billowed out. There was no movement inside.

Officers pulled out his body. One of his thick rubber shower shoes was melted onto his foot, prisoners said.

“They took him out on a gurney, but we all knew the truth,” Woods said. “He was dead.”

Afterwards, investigators showed up to ask questions and take statements. Almost a month later, DeGlandon resigned. “I spent a year in Iraq with the Army and everyone came back alive, and I spent two months in prisons and this happened,” he said.

The sergeant involved in the incident was fired and the lieutenant resigned, according to the prison agency. Another sergeant was demoted and a captain given six months of probation. None of them could be reached for comment.

Though a November report showed the inspector general’s office opened a manslaughter investigation, prosecutors said no charges have been filed because the death is still being investigated.

The agency said the deaths of De La Garza and Bryant were both “isolated incidents” and that contractors had been selected to fix infrastructure problems at both prisons.

Back at Gib Lewis, the men who witnessed his death said it still haunts them.

“I still sometimes envision him struggling for his life,” Pedraza said, “putting his face in that little window, trying to get air.”