What You Need to Know About the Rise in U.S. Mass Shootings

A high-profile mass shooting at a Chicago suburb’s July 4 parade was the nation’s fourth in recent weeks. 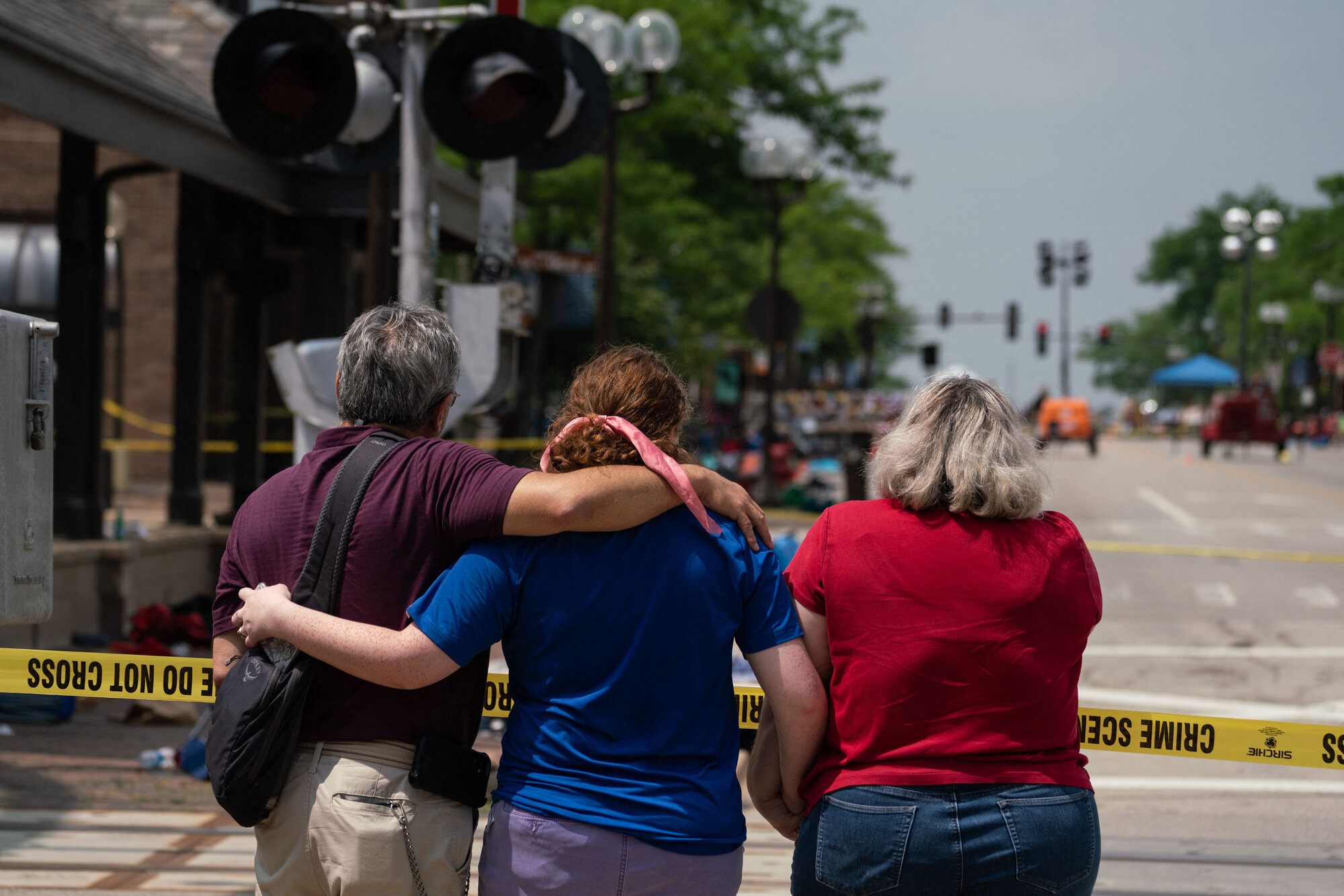 Three people embrace while observing the scene of a mass shooting at a July 4th parade in downtown Highland Park, Ill., on July 5, 2022. Max Herman/AFP, via Getty Images
By Anastasia Valeeva, Wendy Ruderman and Katie Park

Curious how we did this? Read our methodology.

On the morning of July 4, President Joe Biden hailed the day as one to “celebrate the goodness of our nation.”

Shortly after his tweet, a gunman on a rooftop opened fire into a crowd of spectators who gathered to enjoy a Fourth of July parade in a Chicago suburb. He killed seven people and injured dozens.

Monday’s mass shooting in Highland Park, Illinois, brought fresh anguish to a nation already shaken this year by the murders of schoolchildren in Uvalde, Texas, and Black shoppers in Buffalo, New York.

If it feels like mass shootings have become more frequent, that intuition is correct, according to data analysis by The Marshall Project.

Under one of the most conservative definitions of “mass shootings,” in which a gunman slaughters four or more strangers in a public place, the number of these crimes has indeed been climbing in the last few years — and they have higher death tolls, as well.

Mass shootings account for just a fraction of the daily toll of firearm deaths in the U.S., where about 124 people die every day in other acts of gun violence.

Our analysis is based on data from The Violence Project, a nonprofit research group that uses a narrow definition of mass shootings adopted from the Congressional Research Service, which advises federal lawmakers.

Thirty-one of these massacres occurred from 2017 through 2021, compared with 24 from 2012 through 2016, according to The Violence Project data. We compared five-year periods so we could measure trends over time, rather than focus on the dip to two incidents in 2020, which researchers attributed to the COVID-19 lockdown, or the spike caused by the 2017 mass shooting in Las Vegas that left 58 dead. The last five years have seen more mass shootings than any other comparable time span dating back to 1966.

The Violence Project defines mass shootings as single incidents in which four or more people are killed (not including the shooter), in public locations, such as schools, stores, or workplaces. It excludes murders that occur because of domestic violence, or in the course of another crime, such as armed robbery or gang violence.

Under this definition, there have been four mass shootings so far in 2022: Highland Park, Uvalde, Buffalo and Tulsa, Oklahoma, where a gunman stormed a doctor’s office at a hospital complex, killing four people before taking his own life. The count puts 2022 on pace with last year, when there were a total of six mass shootings.

As mass shootings in the U.S. reached a record high, so did the number of deaths and injuries. From 2017 to 2021, perpetrators killed 295 people — about a third more than the 221 fatalities in the five-year period that ended in 2016. The number of people injured was five times higher.

Much of the increase in both deaths and injuries was attributable to the deadliest mass shooting in modern U.S. history, which occurred in 2017 at a music festival in Las Vegas. A gunman, armed with multiple assault weapons, killed 58 victims. An additional 887 people were injured, including scores hurt in a stampede, according to The Violence Project. But even excluding Las Vegas, the number of dead and injured was still higher in the last half decade when compared with the five years ending in 2016.

The number injured in mass shootings increased, even without the Las Vegas shooting

The mass shooting on July 4 was the fourth in fewer than three months. In all four, the gunmen used high-powered weapons, law enforcement authorities said. President Biden last month signed the most significant gun safety measure in decades, though the new law does not include a ban on assault weapons and high-capacity magazines, a provision Biden and Democrats had wanted.

Our analysis shows that in the past five years, assault-style weapons have been used in nearly half of mass shootings, compared to a third of them in the previous five years.

There is no national, legal definition of a “mass shooting.” Several organizations track mass shootings, but use different yardsticks: Some count only incidents in which three or more people are killed; others measure incidents with at least four people killed or injured.

The lack of consensus on what qualifies as a mass shooting makes the problem confusing to talk about, let alone try to address, said Jacob Kaplan, a criminologist at the School of Public and International Affairs at Princeton University.

“If you have one definition of a mass shooting and I have a different definition, it’s hard to really even have a conversation,” Kaplan said. “It’s not like one is obviously right, or obviously wrong. It’s just that you have to be very precise about what you’re talking about. And that’s something that tends to get lost in the media and definitely with politicians.”

Some researchers stress the importance of including injuries as well as fatalities when analyzing mass shootings. Jaclyn Schildkraut, a criminal justice professor at the State University of New York at Oswego, said that in recent years victims are more likely to be injured than killed because of faster police and paramedic responses and medical advances. Schildkraut is the interim director of the Regional Gun Violence Research Consortium at the Rockefeller Institute of Government, a public policy think tank based in Albany, New York.

She defines a mass shooting as an incident at a public place with multiple victims, both wounded or killed, and the shooter targets victims either randomly or “for their symbolic value,” such as Black congregants at a church. By this count, there have been 402 mass shootings with 3,590 deaths or injuries from 1966 to 2020, with a steep increase in recent years. More than half of these shootings — 219 — unfolded at the perpetrator's workplace or school.

Other measures of mass shootings have also increased in recent years.

The Gun Violence Archive, an independent research group, uses a broad definition of a mass shooting: an incident in which four or more people are killed or injured, not including the shooter. It includes shootings linked to gang activity, street fights or domestic violence.

The group tallied 318 mass shootings as of 3 p.m. on July 5. That puts 2022 on track to finish as one of the deadliest years since the group began monitoring these crimes in 2014.

Like The Violence Project, Everytown for Gun Safety defines a mass shooting as an incident in which four or more people are killed with a firearm, excluding the perpetrator. Everytown counts incidents that “occur in both public and private spaces, have any number of shooters, and result from a myriad of motives, such as group violence, domestic violence, or terrorist violence.” By the group’s count, there have been 110 incidents in the last five years, compared to 96 from 2012 through 2016.

The FBI tracks what it calls “active shooters”: one or more individuals actively engaged in killing or attempting to kill people in a populated area. Those cases have almost doubled since 2017, to 61 incidents in 2021 that left 103 people dead and injured 140 others.

A sentence in a previous version of this story misstated the number of mass shooting deaths in the U.S. from 2017 to 2021. The correct number is 295, not 299. The figure was accurate in the charts with the same information, and the story’s overall analysis remains correct.

Anastasia Valeeva is a data fellow at The Marshall Project. She joined the data team as part of the Alfred Friendly fellowship program run by Press Partners. Previously, she was teaching data journalism to students and newsrooms in Kyrgyzstan, Central Asia. Anastasia recently graduated from Columbia Journalism School’s Lede Program for data journalism.

Wendy Ruderman is a staff writer for The Marshall Project. She previously worked as an investigative journalist at The Philadelphia Inquirer, where she was a finalist for the 2019 Pulitzer and Goldsmith prizes, and at the Philadelphia Daily News, where she won a Pulitzer Prize in 2010. A reporter since 1991, Ruderman has written extensively about policing, stop-and-frisk tactics, corruption and racial profiling.