Rifles, Tasers and Jails: How Cities and States Spent Billions of COVID-19 Relief

President Biden’s signature American Rescue Plan Act gave local governments $350 billion to recover from COVID-19. They spent much of it on police, prisons and the courts.

After signing the $1.9 trillion American Rescue Plan Act (ARPA) last spring, President Joe Biden touted what the economic stimulus bill would deliver: food assistance to millions of people in need, lower healthcare premiums for millions of Americans, and $350 billion for state and local governments to spend on COVID-19 recovery. Economists say it was the largest infusion of federal funding in local governments in almost 40 years.

A year later, ARPA became one of President Biden’s talking points to demonstrate Democrats are not out to defund the police.

“[T]he American Rescue Plan … provided $350 billion that cities, states, and counties can use to hire more police, invest in more proven strategies like community violence interruption, trusted messengers,” Biden said during his State of the Union address this year.

That’s indeed what thousands of state and local governments did with the federal COVID-19 relief funds they received. While the Treasury Department’s lax reporting requirements make it difficult to track exactly how much was spent on law enforcement, corrections and courts, a Marshall Project review of the latest data shows that billions of dollars flowed to the criminal justice system by the first quarter of 2022, from covering payroll to purchasing new equipment. So far, governments have allocated $101 billion of the total $350 billion.

With few limitations on how local governments can allocate ARPA funds, the spending will likely continue reflecting each municipality’s priorities and values. In many cases, the money flows to programs and institutions not with the greatest need during a public health crisis and economic upheaval, but those with the most existing political and budgetary power: police, corrections and the courts.

Here's an example of how local government spent the federal COVID-19 relief fund on the criminal justice system.

For all that we can see from the latest data, there is one very large, and largely opaque category: The majority of all current ARPA obligations, $52.6 billion, were categorized as “Revenue Replacement.” To claim revenue replacement, local governments can either calculate how much tax revenue they lost because of the pandemic using a formula, or elect for a one-time allowance of $10 million. The Treasury Department said this would provide greater flexibility and eliminate administrative burden — but experts say it also reduces accountability and oversight.

Nearly half of this $52.6 billion went to projects that mentioned police, law enforcement, courts, jails and prisons, The Marshall Project found. We searched criminal justice-related terms in the project descriptions that local governments submitted to the Treasury.

It’s challenging to parse out exactly how much money was spent solely on criminal justice nationwide, especially because the project descriptions local governments submit to the Treasury can vary in length and detail. They can be as vague as “government service expenses” ($22 million, Laredo, Texas). Or they can be as broad as “salaries and burden for the provision of core government services, which includes personnel costs for all departments” ($106.6 million, Anaheim, California).

In many cases, the local government has not earmarked how they are spending the revenue replacement funds at all. In its report to the Treasury, New Orleans, Louisiana allocated all $194 million it received so far under one project: “The City has identified revenue loss replacement as its initial project.” This money, along with other revenue replacement funds, will flow to the city’s general fund, where it could be spent according to the city’s existing budgetary priorities.

Sign up for our daily newsletter covering the best in criminal justice news.
Police equipment and infrastructure 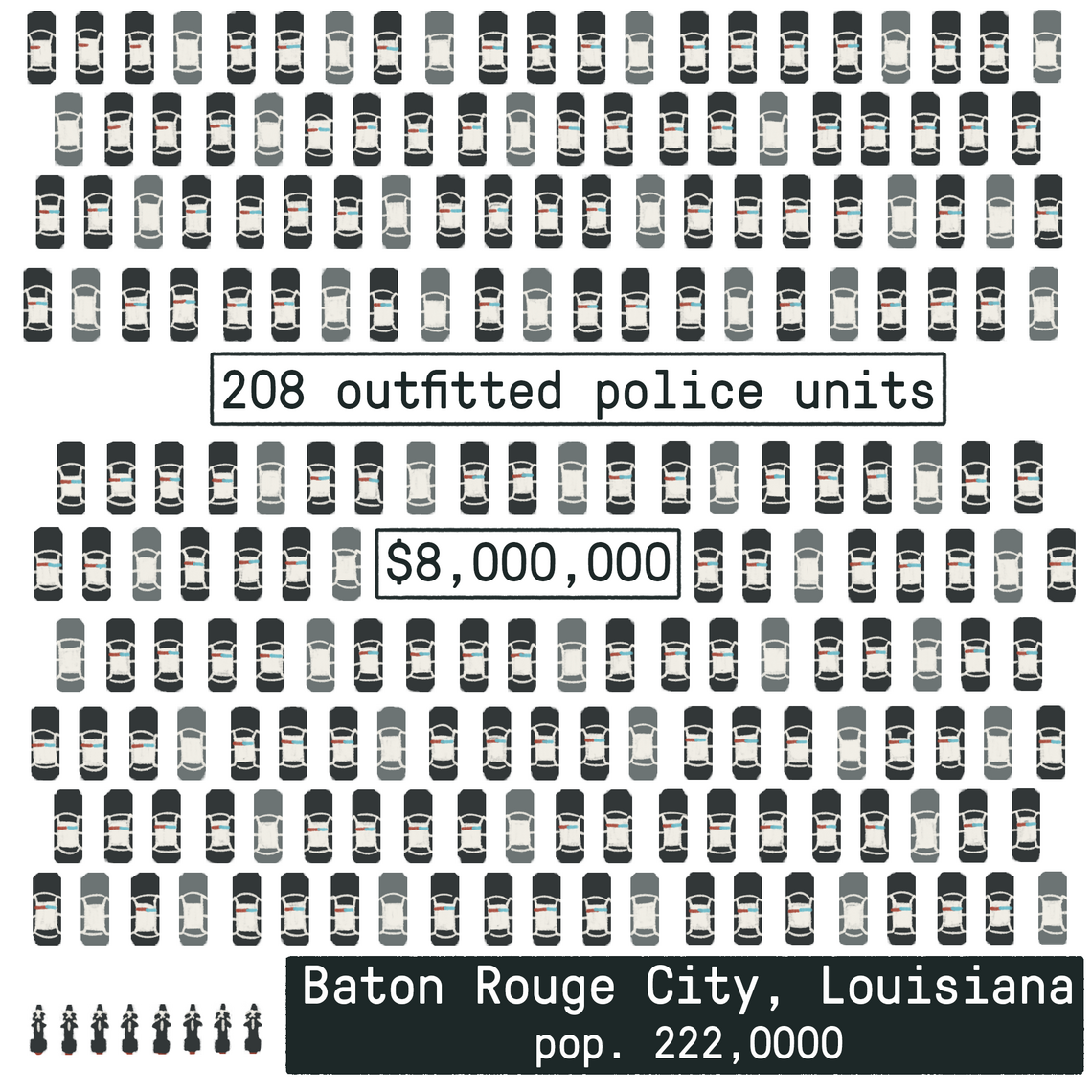 Many local governments report that new policing equipment would help them to curb the spread of COVID-19. Oneonta, Alabama, said their purchase of new tasers with longer ranges would mean “officers will not have to get so close to the perpetrator.” Danville, Virginia plans to spend more than $1.3 million to expand their fleet to allow for “proper sanitization” of vehicles.

Ken Larking, city manager of Danville, said having additional police cars means officers can take them home after work and not worry about sharing unsanitized vehicles with other officers.

The government “could justify the use of the ARPA money based on a response to the pandemic for sanitary reasons,” Larking said, and it addresses a long-term need. “Having a fleet car parked within a neighborhood actually helps the neighborhood feel safer.”

The Cumberland, Maryland police department is using $176,200 in ARPA funds to “remodel the patrol area of the police station to allow for an isolated prisoner area” so those arrested would not put the rest of the station at risk of infection, according to its report to the Treasury. “We can’t shut down a police station and refuse to arrest people,” said Police Chief Chuck Ternent. 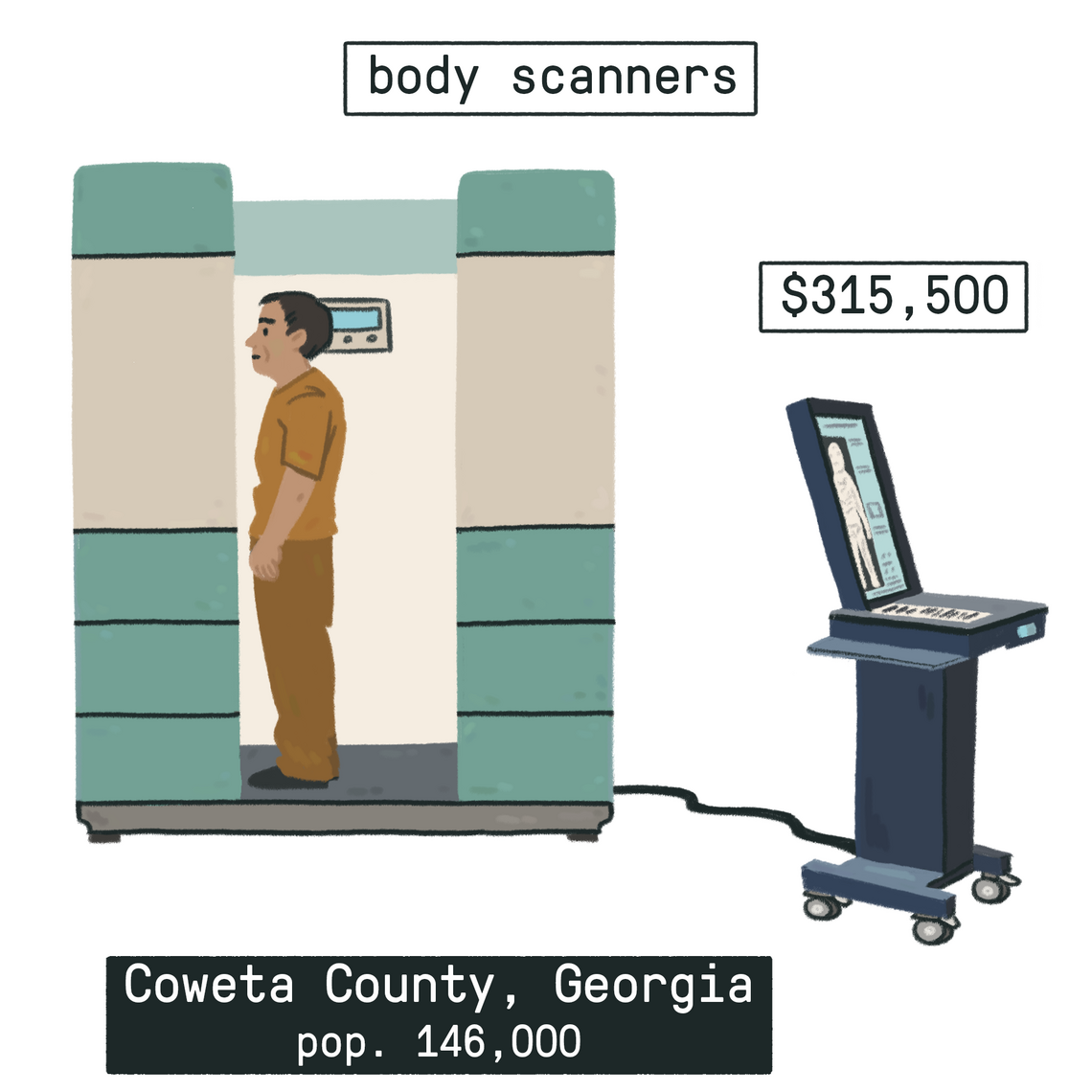 Many cities and states allocated the federal ARPA money they received for prisons and jails, from purchasing equipment, to building up medical units, to constructing new prisons.

COVID-19 relief spending in jails and prisons included “design and construction renovations” to the Clay County Jail in Florida to “secure inmate housing space and maximize the number of additional inmate beds” and “additional cameras in the jail for better segregation of inmates in the event of another pandemic” in O’Brien County, Iowa.

“Cameras not only allow us to watch to see if someone is sick, or on the floor passed out from not being able to breathe from COVID,” said O’Brien County Sheriff Bruce Devereaux. The program “also allows us to see if someone is getting raped or beat up or that type of thing.”

Since then, his department also used federal money to buy a full body scanner “to keep weapons and contraband out,” he said.

The Marshall Project identified at least 36 jails and prisons across the country that acquired full body scanners with ARPA money. In project descriptions submitted to the Treasury Department, some explained how the scanners “reduce exposure to the COVID virus” ($298,436, St. Johns County, Florida) and can measure body temperature.

Corrections across the country also used ARPA money for various expansion projects. Scott County, Iowa, budgeted $7.25 million for a “new Youth Justice Rehabilitative Center.” The State of Alabama is spending $400 million federal grant money on the construction of two prison facilities, which is the subject of multiple lawsuits. 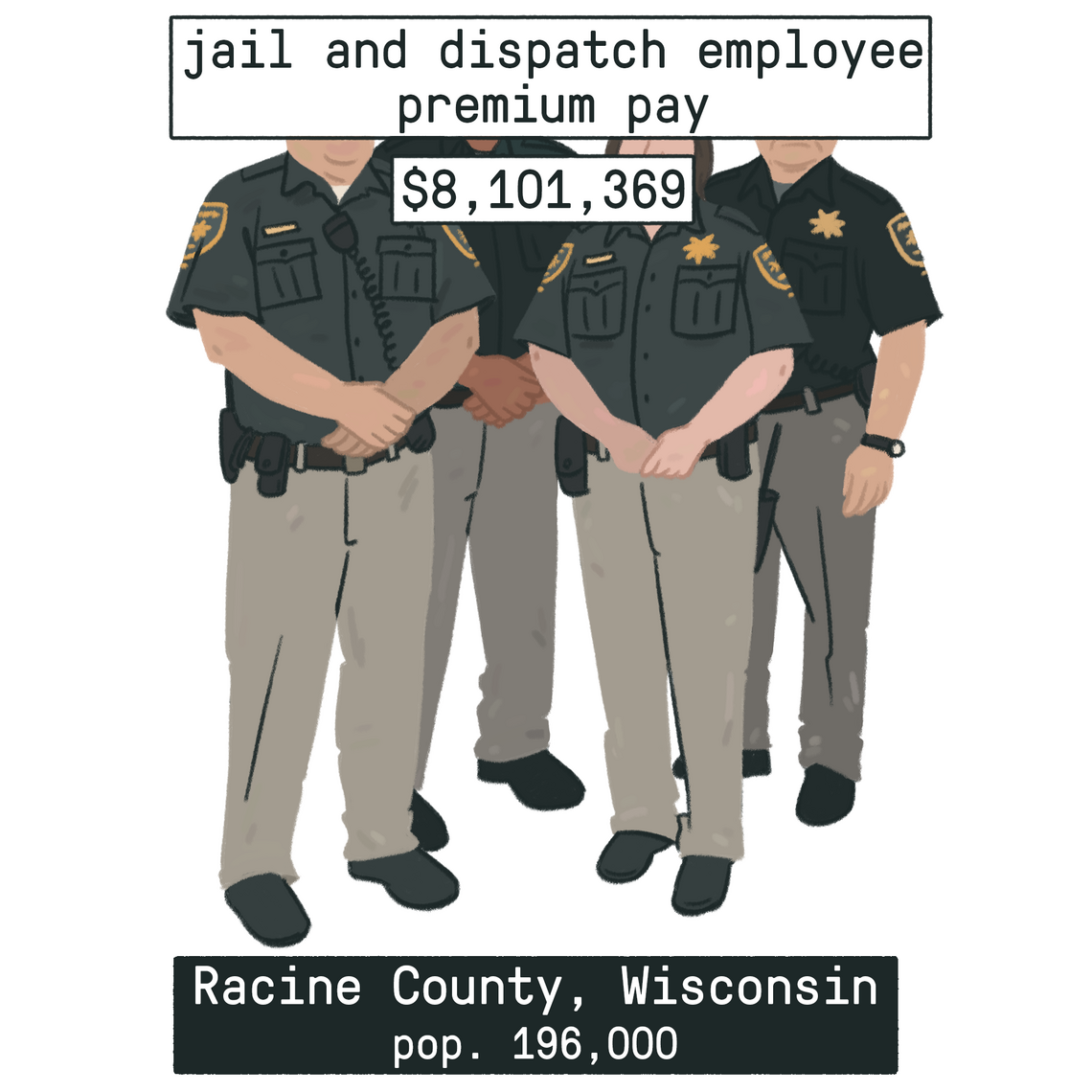 The Los Angeles Police Department received more than $300 million from the city to cover salaries for sworn officers. Phoenix, Oregon, allocated half a million dollars to its police department for “additional [s]taffing of police due to Covid-19 and homeless population.” Greenwood County, South Carolina budgeted more than a quarter-million dollars to give detention center workers each a $10,000 bonus, and offer $10,000 sign-on bonuses to new employees. Colorado’s Department of Corrections allocated $1.3 million in “Private Prison Retention Bonuses” to employees who work at the private CoreCivic facility.

“If you were paying three and a half million for service and your calls were going unanswered, that's really alarming,” he said. The town will use ARPA funds for police officer salaries, weapons, ammunition and vehicles. 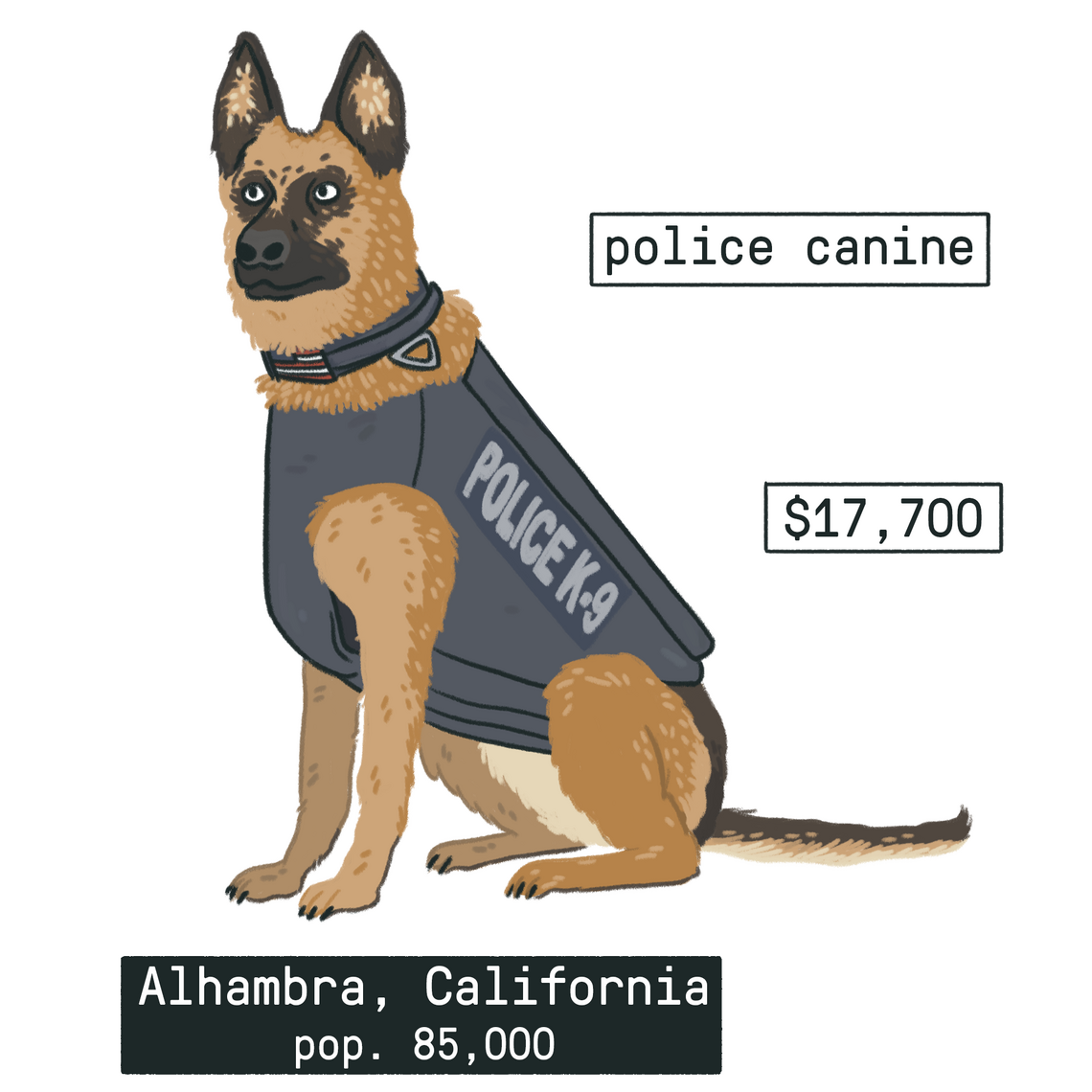 While the federal government does not specifically track how state and local municipalities spend their share of ARPA funding on the criminal justice system overall, “community violence intervention” projects are separately categorized under “public health” spending. Local governments report $187 million in this category, representing less than 1% of total allocated ARPA funds.

According to Treasury Department data, this spending includes a $3.4 million fund that Washington, D.C., allocated to the Safe Passage program, which employs hundreds of workers to help students in the district to feel safe as they travel to and from school. It also includes $161,175 in the state of Virginia for three new microscopes that forensic scientists can use to analyze firearms evidence.

The city of Syracuse budgeted $499,740 in “community violence intervention” to repair surveillance cameras, $554,400 to purchase taser and virtual reality empathy training, and $171,200 to expand ShotSpotter, a controversial gunshot detection system, in the city.

Similarly, Macon-Bibb County, Georgia and Toledo City, Ohio both reported to the Treasury that their community violence intervention projects include spending ARPA funds to purchase ShotSpotter. 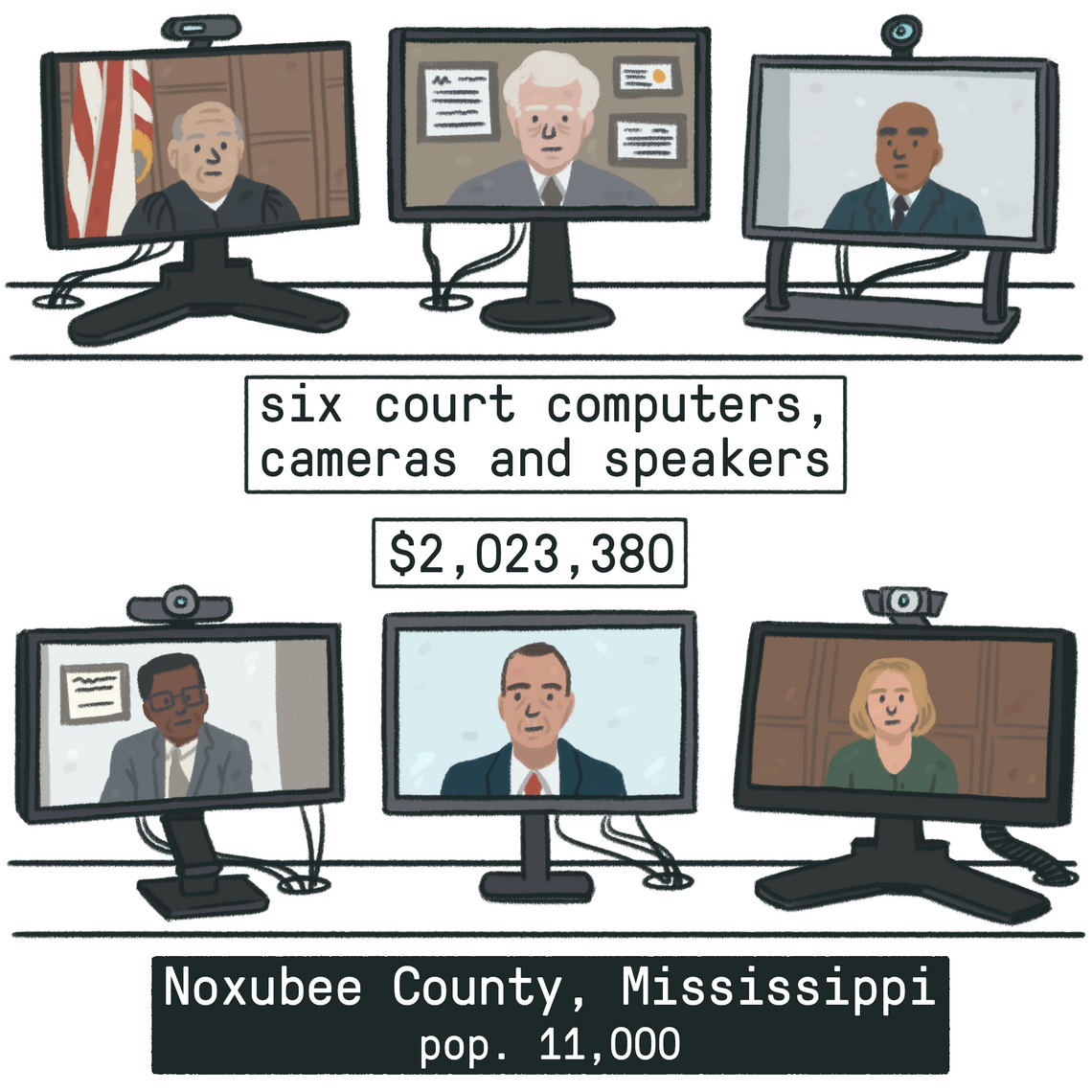 The Treasury Department recommended use of ARPA funds to reduce the pandemic-related court backlogs. At least 87 state and local governments mentioned a court backlog in their ARPA project descriptions.

The impacted courts, in turn, caused overcrowding in jails and prisons, many cities reported to the Treasury. Some systems tried to reduce the jail population while working through the slowdown, such as providing ankle bracelets (Thurston County, Washington) or funding the Electronic Home Detention program, an alternative to jail (Pierce County, Washington).

Elsewhere, ARPA funds were allocated to “safety staff responding to court backlogs resultant from the pandemic” ($101,000, Outagamie County, Wisconsin and “transferring inmates to other facilities in order to mitigate the spread of COVID-19” ($16 million, Hidalgo County, Texas).

In July, commissioners in Harris County, Texas debated whether to approve another $25 million from ARPA to transfer incarcerated people eight hours away to Giles Dalby Correctional Facility, a private prison run by Management and Training Corporation.

“We would rather spend that money here on roads and more health initiatives and other more productive things,” County Commissioner Adrian Garcia said in a public meeting. It is inhumane to make people travel for hours to visit their loved ones, but maintaining an overcrowded jail is even more inhumane, he told his fellow commissioners.

“While we can weather it for this year and use ARPA funds, that’s at the cost of not doing something else with those ARPA funds”, said County Administrator David Berry.

Judge Lina Hidalgo called it “kicking the can down the road.”

Despite the misgivings and criticism, the commission unanimously approved the spending.

Correction: A previous version of this story incorrectly referred to the time when commissioners in Harris County, Texas, debated whether to approve ARPA funds to transfer incarcerated people to a private prison eight hours away. The commission debated in July.

Anastasia Valeeva is a data fellow at The Marshall Project. She joined the data team as part of the Alfred Friendly fellowship program run by Press Partners. Previously, she was teaching data journalism to students and newsrooms in Kyrgyzstan, Central Asia. Anastasia recently graduated from Columbia Journalism School’s Lede Program for data journalism.