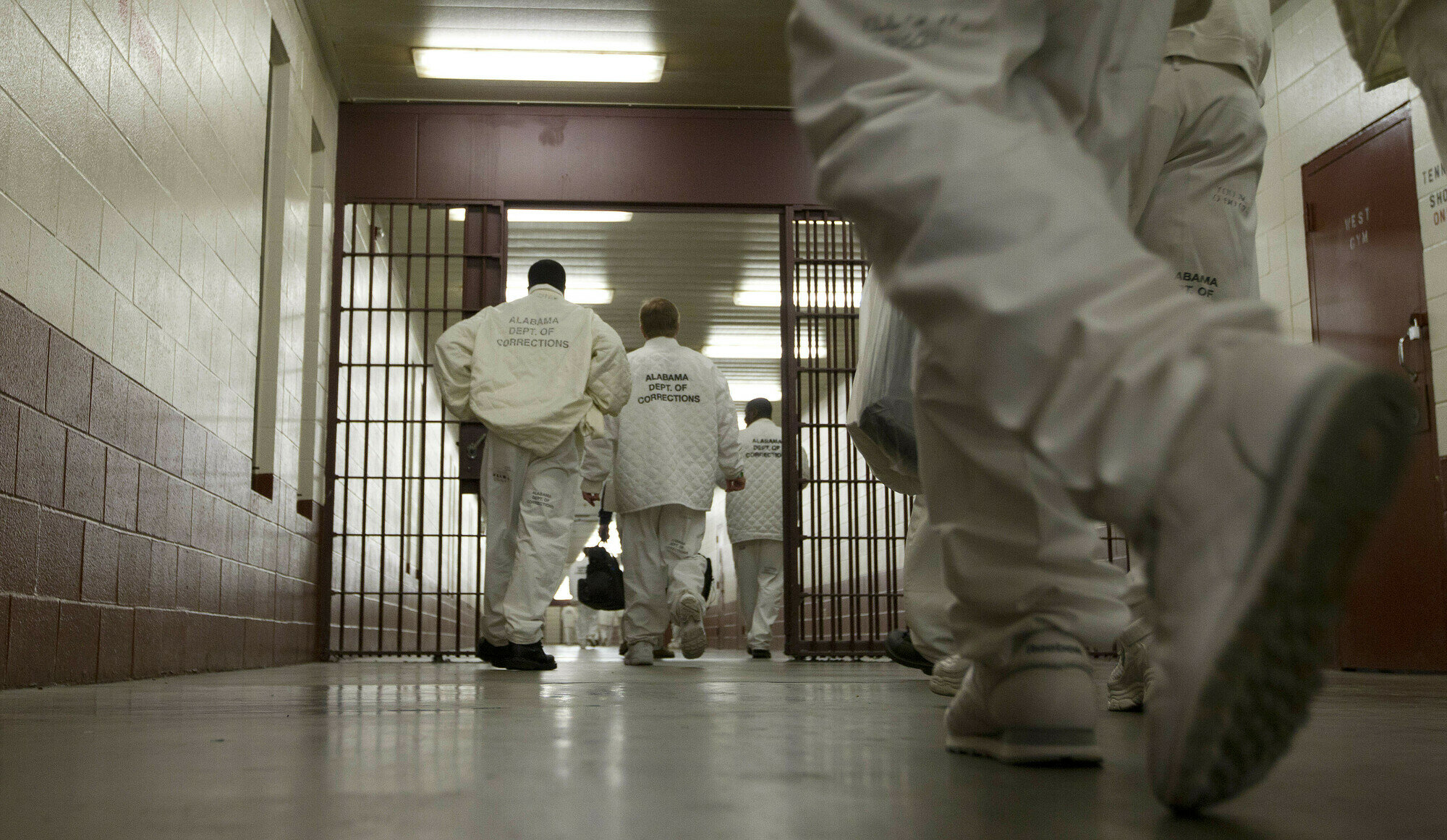 Prisoners at Donaldson Correctional Facility in Bessemer, Ala. in 2011. Cell phone footage of an attack in Donaldson that left one man dead surfaced this weekend. Dave Martin/Associated Press
By Keri Blakinger

Last Friday, five days after Alabama prisoners launched a statewide labor strike, Republican Gov. Kay Ivey assured reporters that the head of the state’s beleaguered corrections department had things “well under control.” But images and interviews from inside the state’s prisons show a system in disarray, with deteriorating conditions, pervasive violence, multiple deaths and little oversight from staff.

The strike started Sept. 26 after thousands of prisoners refused to leave their dorms and cell blocks for work in mess halls, factories and trash crews. Prison administrators said they had to cut back food rations from three meals a day to two, which prisoners saw as retaliation, but officials blamed on the fact that meals are generally prepared by the incarcerated workers themselves. Guards stopped letting people out for visiting, recreation or school. Cell phone footage shared with The Marshall Project shows trash piling up in walkways and dorms in some prisons. 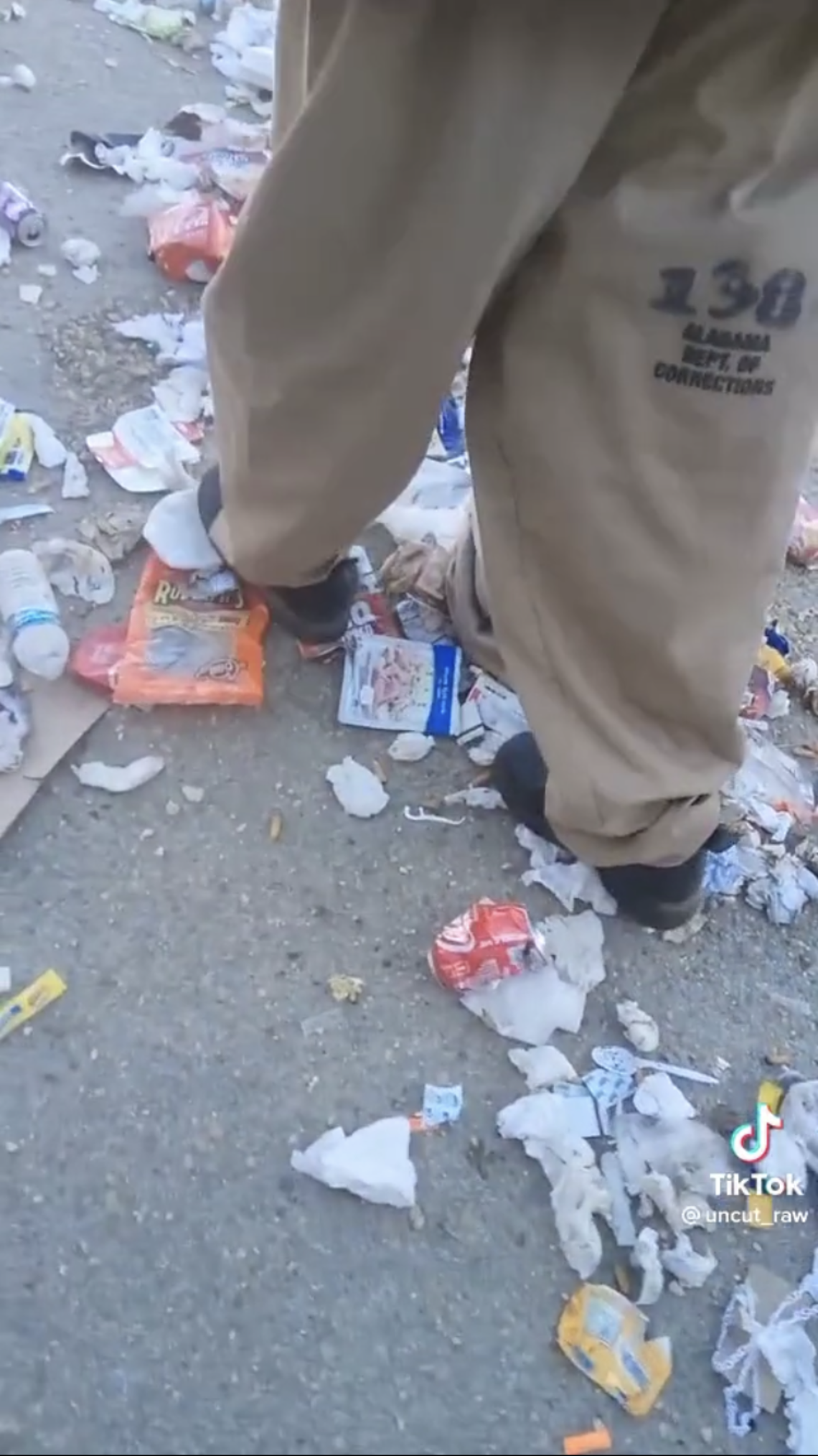 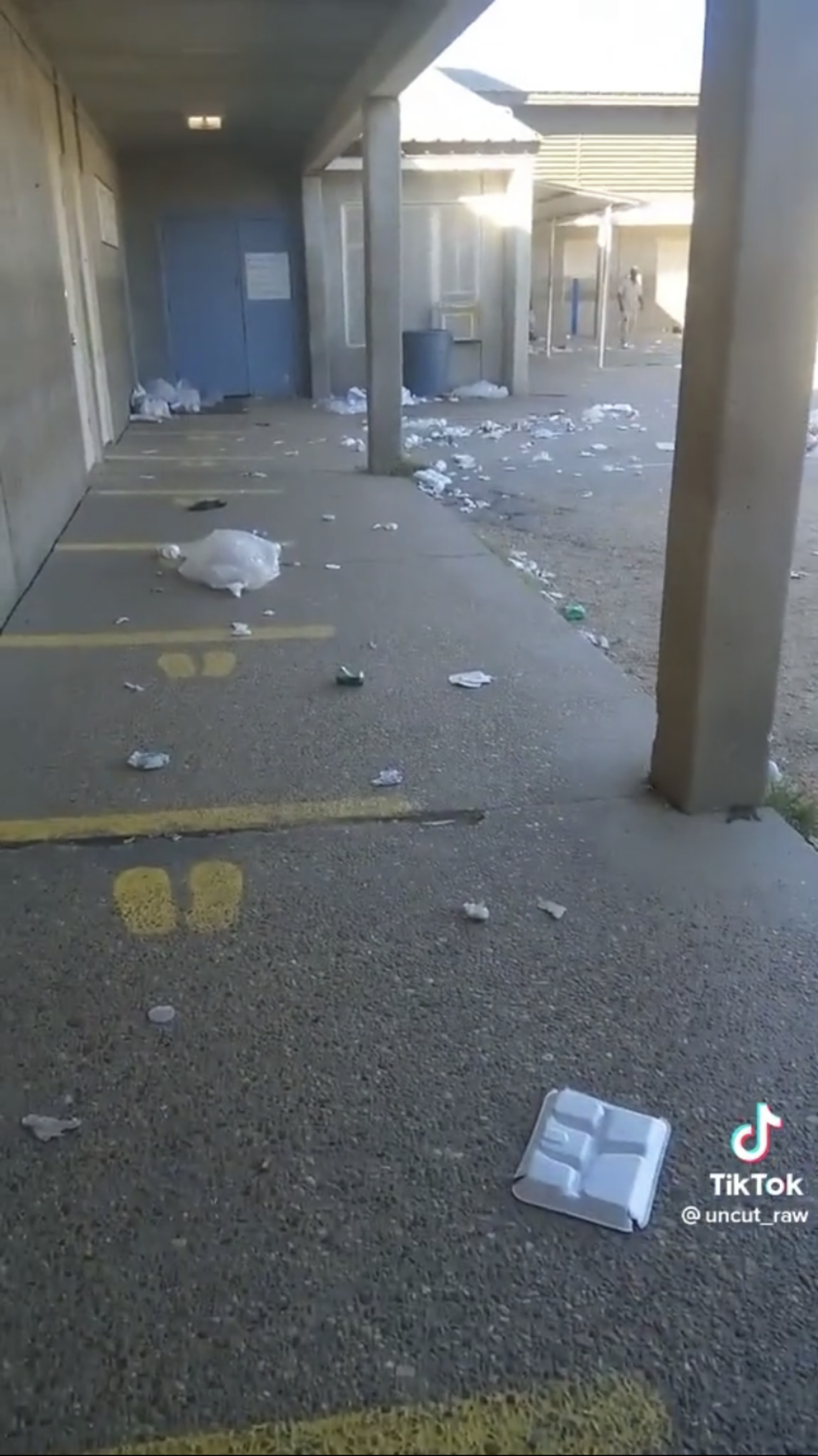 Cell phone footage inside an Alabama prison shows how garbage is accumulating in a yard while the prisoners who usually collect it are participating in a labor strike to protest living conditions. uncut_raw via TikTok

Then on Saturday — less than 24 hours after the governor’s declaration — prisoners recorded grainy cell phone footage of what appears to be a fatal stabbing in an Alabama lockup. The first of the two short clips, which prisoners said was filmed at Donaldson Correctional Facility in Bessemer, Alabama, shows one man apparently stabbing another in a common room as others watch from a few feet away. The second video shows a man sprawled out on the floor, struggling to lift his head up, while another prisoner leans over him as if to check whether he’s alive.

The Alabama Department of Corrections did not dispute the authenticity of the videos, and confirmed that 30-year-old Denarieya Smith was killed Saturday at Donaldson in an “inmate-on-inmate assault involving a weapon,” which officials are investigating. The department cited security concerns and refused to answer questions about whether the unit is understaffed. In the most recent numbers made public, the Department of Corrections was authorized by the legislature to have 3,326 employees in 2018. This summer, it had a little more than half that many, according to a staffing report from June.

“We’re not going outside except for chow,” said one man who spoke to The Marshall Project from a medium-security facility and asked not to be named for fear of retaliation from prison officials. “There’s no visitation. There’s no trade school. No laundry. No ice. The officers have been working 16 hours a day since this started, but I noticed there’s less and less of them whenever we go to chow.”

The man said he’d seen videos of fights and violence, including images of Smith’s killing. The county’s medical examiner confirmed that a second prisoner at Donaldson — 29-year-old Joseph Agee — had also been stabbed to death since the strike began. The medical examiner said both deaths are being investigated as homicides.

“What we saw in that video is outrageous — but it’s been outrageous in DOC for so long, and it just doesn’t let up,” said Carla Crowder, executive director of the advocacy nonprofit Alabama Appleseed. “It is not unusual to have multiple homicides or drug overdoses in a week, and videos circulating of sleeping guards and open-air drug use in the dorms. That is the new normal.”

She added that the governor’s claims of control are “meaningless words, not grounded in reality,” she added.

The Alabama prison system has been the target of a federal investigation for years, and in late 2020, the Department of Justice sued the state over concerns about overcrowding, violence and a high risk of death for incarcerated people. Despite the added scrutiny, prisoners and advocates said conditions have not improved. And as the case is not slated for trial until 2024, some hoped a collective action would spark legislative changes to sentencing and parole practices that could free people instead.

Since the Justice Department's lawsuit began, “the death toll has risen significantly,” said Diyawn Caldwell, founder of the advocacy group Both Sides of the Wall. “They’re understaffed. The officers are bringing in the drugs that are killing people. The conditions are barbaric. You have people that are committing suicide. No one is making parole. What else do we do?”

The corrections department did not respond to questions this week about the extent of the work stoppage, about violence and deaths in the prisons or about Caldwell’s allegations.

After months of planning, prisoners and outside advocates publicly issued a list of policy-focused demands last week. The list included a streamlined review process for medical furloughs, clearer parole guidelines, retroactive repeal of the state’s habitual offender law, an end to life-without-parole sentences and the creation of a statewide conviction integrity unit. Prisoners who spoke to The Marshall Project acknowledged that most of the demands were outside the purview of the corrections department and would instead require the legislature to act.

“Maybe they have to start listening. I think they know something is wrong, but did they know we’re really tired of it? By stopping work now, we are sending this system that’s already in crisis into another crisis,” said K. Shaun Traywick, an incarcerated activist who goes by “Swift Justice.”

Prison strikes are not uncommon, and at least twice in recent years prisoners in Alabama have been at the forefront in launching work stoppages that spread to prisons in several states, garnering nationwide attention. 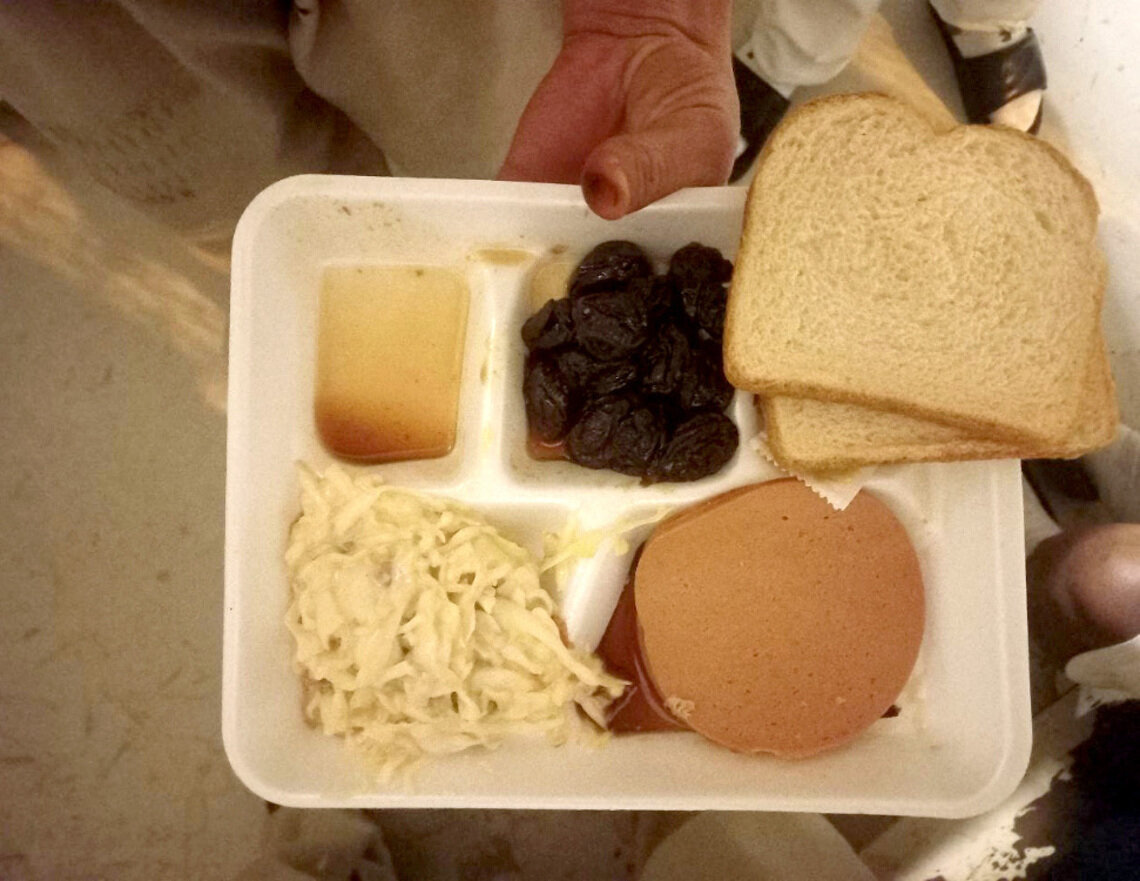 Alabama prisons have reduced the number of meals offered to the incarcerated during the work stoppage. One meal during the strike consisted of coleslaw, prunes, two pieces of bread and baloney.

“Meals have included slices of bread topped with some sort of sludge, uncooked hot dogs and miniscule portions of canned fruit,” a lawyer representing the prisoners wrote on the fifth day of the strike. In a court filing last week, attorney Clifford Hardy accused the corrections department of trying to starve prisoners into submission, citing as proof a memo circulated at Donaldson Correctional Facility “detailing that meal reductions would continue until the labor strike ended.” 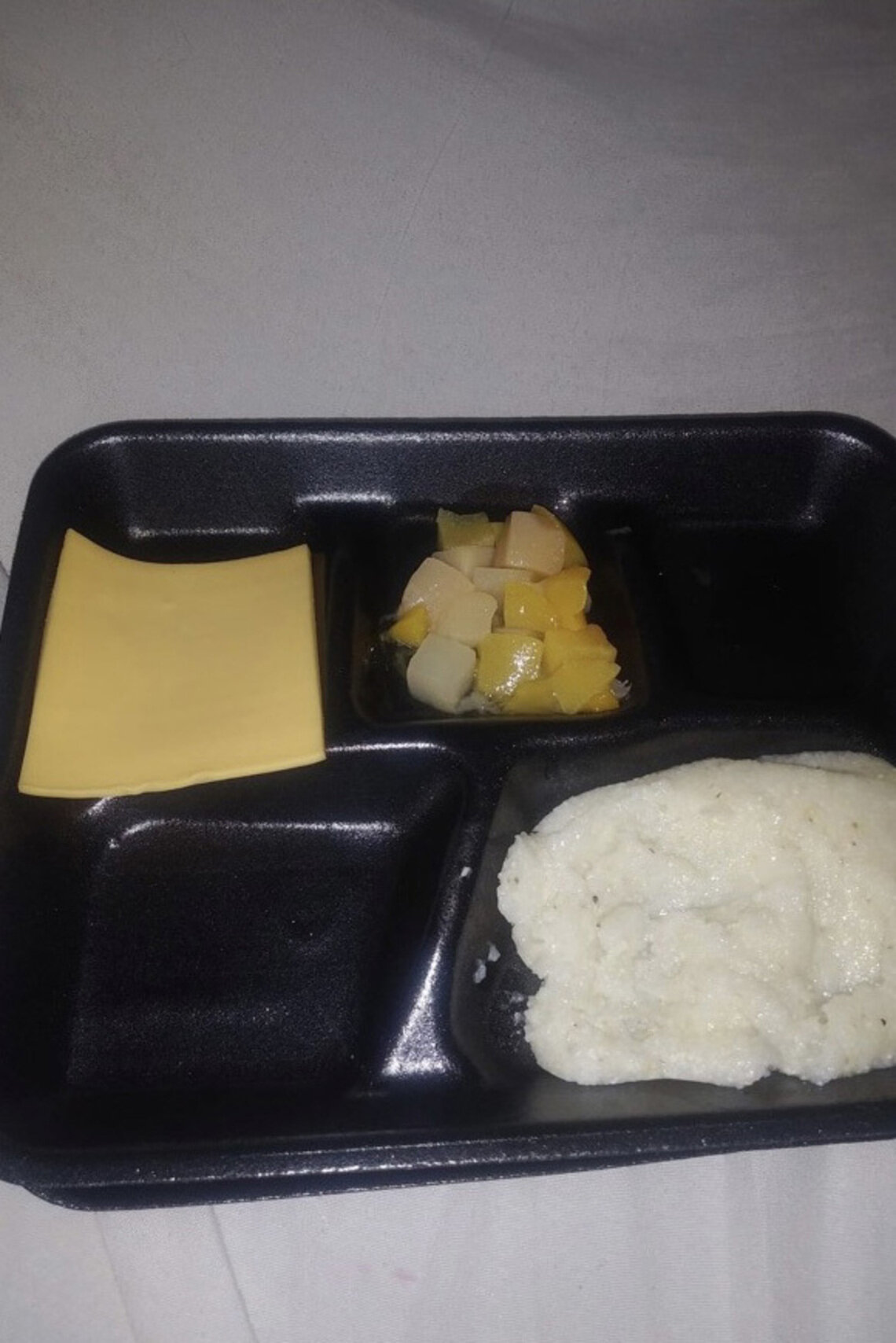 A tray of cheese, mixed fruit and mashed potatoes.

U.S. District Court for the Northern District of Alabama

Prison officials have not yet responded to the allegations in court, but said in a press release that because mess hall workers had refused to come to work, the restricted feeding schedule was “logistically necessary to ensure that other critical services are being provided.”

The same day the prisoners’ lawyer complained to the court, the governor held her press conference in Montgomery, calling the demands “just unreasonable” and offering assurances to the public that new prison construction would improve conditions.

“Everything’s still operational,” she said. “There’s no disruption in essential services. We’ve still got our two prisons being built, so we can better provide safety for the inmates as well as the workers.”

Prisoners and their advocates disputed the notion that the demands were unreasonable and scoffed at the governor’s assessment of the current state of Alabama’s lockups.

It’s not clear how many prisoners are participating in the strike or how long the work stoppage might last. On Monday, the department told AL.com that some people had returned to work, but five prisons remained entirely shut down by the strike. Prisoners who spoke to The Marshall Project disputed the department’s characterization that the protest was winding down.

Regardless, the collective action is attracting attention from people imprisoned in other states. In group chat messages shared with The Marshall Project, dozens of men in prisons in other Southern states have begun talking about whether they could replicate Alabama’s work stoppage.

“I wanna see Georgia do this,” said the man who spoke to The Marshall Project from a medium-security prison in Alabama. “I wanna see the whole South do this.”

Correction: An earlier version of this story misstated the location of the governor's press conference. It was in front of the state capitol in Montgomery.