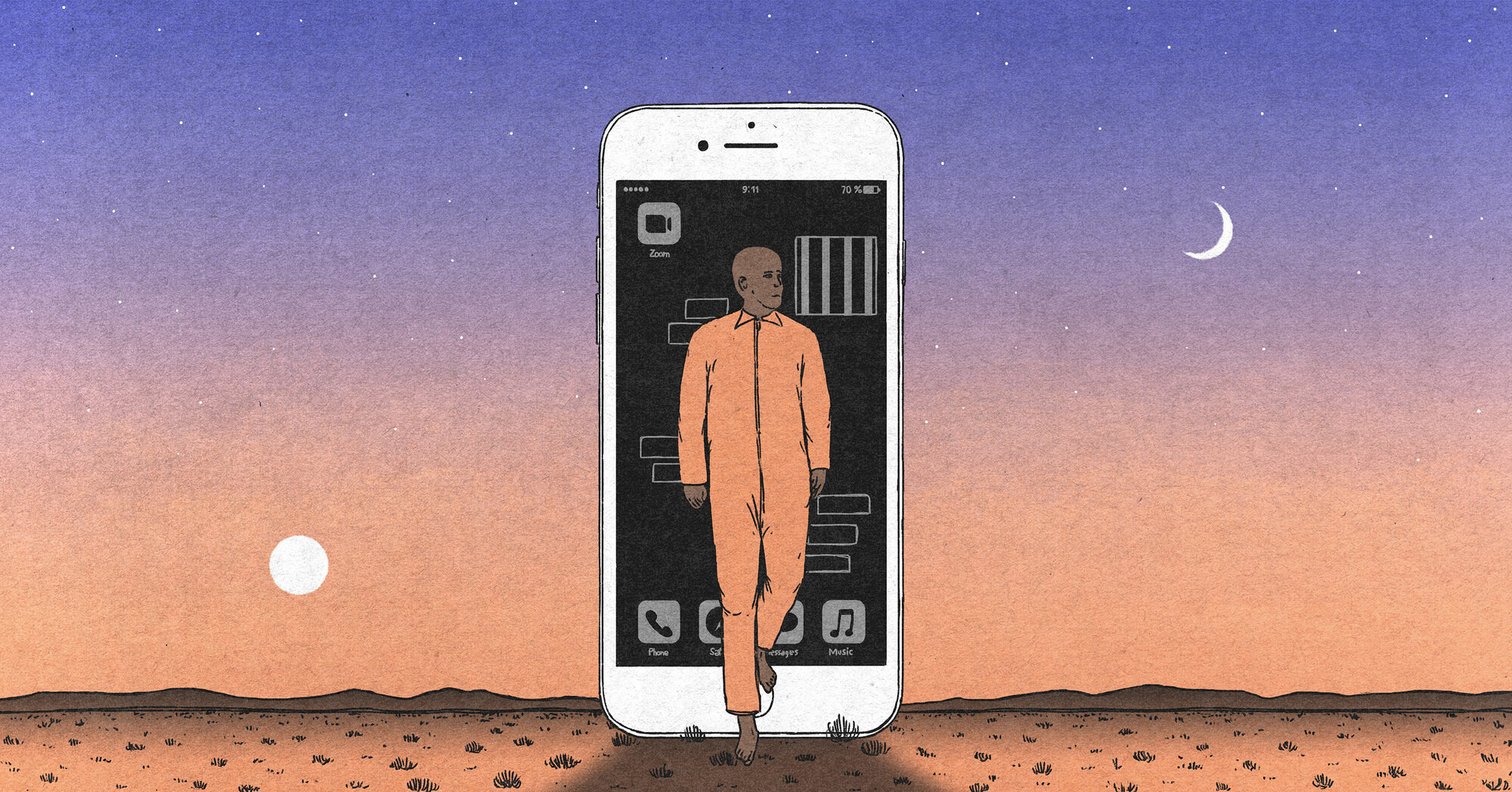 Lorenzo D’Alessandro for The Marshall Project
By Anonymous as told to Charlotte West
Perspectives from those who work and live in the criminal justice system. Sign up to receive "Life Inside" emailed to you every week.

On the first day of Zoom classes, my professor went straight into content I’m all too familiar with: the school-to-prison pipeline. Every day as a certified peer support specialist at a maximum security prison, I see the long-term impacts of poverty and a broken K-12 system in marginalized communities.

This article was published in partnership with OpenCampus.

Later, I met two of my classmates in the criminal justice certificate program, which is run through a top research university in the Northeast. What I didn’t mention to them is that not only do I work in a prison, I also reside there. And I’m taking the class on a contraband cell phone.

Before smartphones were a thing, having cell phones inside was about staying in touch with friends and family. As time went on, the tech ended up advancing and then evolving into the internet and having these touch screens.

Now, I'm connected to the world. Cell phones are about seeing what's going on in the greater society. I’ve had to get creative because the prison I’m at, located in the South, doesn’t offer any opportunities to take college classes beyond a few vocational programs. That led me to pursue education. I chose a self-paced program, so that I don't have to worry about the semester if I run into a situation where something may happen with the phone. I wanted a program that dealt with youth and so-called juvenile delinquency. That's something that I'm not only doing now, but something I want to do if I'm allowed out of this place.

When I first started classes, I was a little nervous. I didn't want to give any type of indication that I am in prison, because I didn't want to be kicked out. On Zoom, I use a filter with a nice, office-type setting as my background so that others don't see my actual cell. I never wear uniform clothing, I always wear a white T-shirt, or a T-shirt with some type of artwork on it to kind of change it up.

It’s generally gone smoothly, but there have been a few tech issues. When the university introduced a new multifactor authentication to log into class, it wouldn’t work. A friend tried to troubleshoot, but the professor ended up helping me when I told her I could only attend class on my cell phone.

I was locked up at 19 years old. In 1990, I started serving a sentence of life with the possibility of parole for a first-degree murder charge. The first time I saw a cell phone was in 2002. I was transferred to a new institution, and as soon as I entered the dorm, one of the guys I knew called me over. “You need to call your people?” And he put a cell phone in my hand.

I didn't know how to work the phone, but I knew I wanted one. At that time, in the early 2000s, the phone call rates were crazy. They’ve gone down considerably, but at that time, everything was long distance, where you had extra charges for calls that weren’t local. Now, prices have gone down, but It’s still expensive. I can do a video call with my family without having to pay $10 for 10 minutes, and do emails free of charge, instead of paying 25 cents an email.

When my older brother died recently, I was able to go on and see the video of funeral services. I wouldn't have been able to do that on a prison phone.

How do the phones get in? It was in the media, so this isn’t exposing anything. Drones are the main vehicle that's used for that. They drop them into an accessible area outside where someone can retrieve them. I'll put officers in there as well. We might as well expose their behinds. We hide the phones very meticulously…heating/AC ducts, thick books, etc.

Depending on availability, right now, a brand new iPhone 13 Pro Max or its competitor, the Galaxy S22 Ultra, will run $3,500 (more than 250% markup over the street price). Used and non-flagship models can run $800, or $1,250 for brand new. They're not plentiful, so you have to be in the know. I use a prepaid service with a data plan.

There are consequences for using cell phones. Here, if we get caught, it's only up to 90 days of restrictions. At most, you won't be able to use the prison phone for 90 days, and you won't be able to go to the canteen — that's where you buy your food, your personal items and what not. And you won’t be allowed visitation privileges for 90 days. That is the max. In some other states, the penalties are stiffer, but at this point, I’d risk the hole or having more time tacked on to my sentence to have that connection to the outside world.

Staff, for the most part, do not look at having cell phones as a grave infraction. People use them in their cells. Staff can stumble across a cell phone plugged into a charger and just overlook it. It’s prevalent to the point where some officers use them to call for personal matters since they can’t bring their own phones in the prison.

Without this type of access, there’s so much quality information that we’re not getting, important information about dealing with things like therapy, trauma and different self-help tools that we can get online.

It’s only been through my cell phone that I’ve had access to quality information about the institutionalization of incarceration, the psychological impacts, youth and brain science, and post-traumatic stress disorder, and all that. I wouldn't have known about any of those things about my own development, or about why I did the things I did when I was a young man. No one in the prison system was able to answer those questions. And I've been able to share that information with others.

It’s also taught me digital literacy. Imagine getting out and not having this experience. I've pretty much mastered the phone. Had I not had this access, I would be oblivious.

As far as education, I'm unique because most people use cell phones for communicating with loved ones and for internet access. I can't forget the gaming as well. Some of these guys were gamers before they were incarcerated, now they’re gamers up in here. There's a criminal element, but I believe it's not as prominent as the greater society thinks, especially in state facilities.

I don’t want to waste the opportunities offered by having this connection to the outside world. I'm not just going to be playing around on the phone. I don't think it's worth taking the risk. Even though it’s really not a big deal here, I wouldn't have one if I wasn't doing something of benefit when it comes to classes or just learning things.

It most definitely can be used as a tool for bettering oneself. That's what I've done. Not everyone is doing that, but the majority of guys are using them for their own personal way of dealing with incarceration.

The person interviewed is incarcerated in the South and currently works as a hospice volunteer and mentors justice-involved young adults.

Charlotte West covers the future of postsecondary education in prison for Open Campus, a nonprofit newsroom focused on higher education. Follow her on Twitter at @szarlotka and sign up for her newsletter, College Inside.