The Many Ingenious Ways People in Prison Use (Forbidden) Cell Phones

Despite the security concerns of administrators, incarcerated people use phones to hustle, make TikToks or publicize prison conditions. 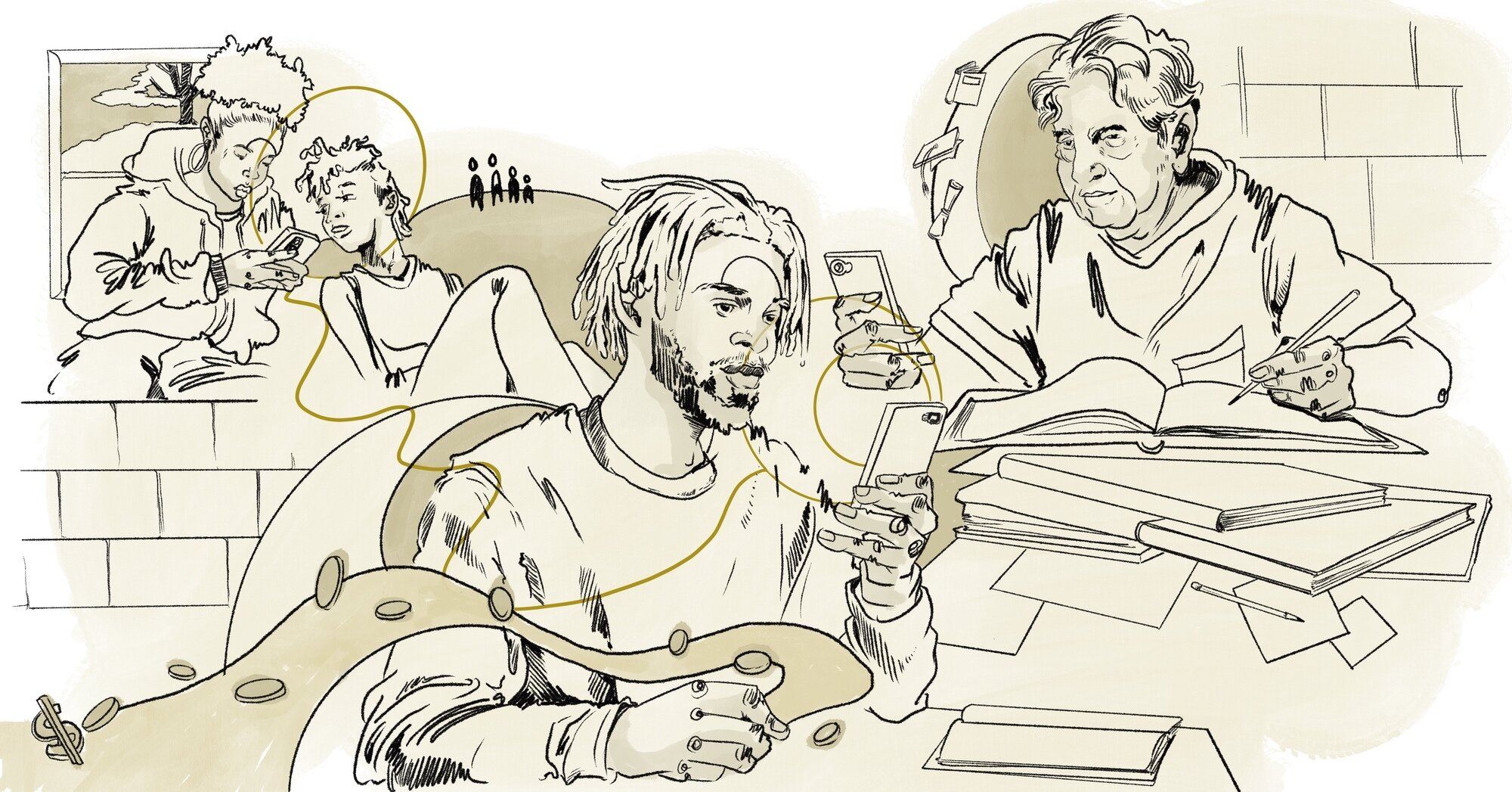 Kayla Salisbury for The Marshall Project
By Keri Blakinger

Sometime around the start of the pandemic, a young, blonde woman I’d never met sent me a message on Twitter.

She promised damning information about deteriorating conditions at a notorious Texas prison — and said she had video to prove it.

The clips were short, but they showed a darkened prison pod with black smoke wafting through the air. In the background, people screamed. I’d never seen such raw footage before, and when I messaged the woman some follow-up questions, she said she’d ask her source and get back to me.

Her answers came far more quickly than I expected and eventually, I realized: The young, blonde woman was not young, not blonde and not a woman at all. She was a middle-aged man in prison, using a contraband phone and fake online persona to draw attention to worsening conditions behind bars.

Until then, most of what I knew about illicit electronics came from press releases and news stories that offered example after example of all the bad things people could do with contraband phones, things like trafficking drugs, making threats and running scams. While it’s true those things can happen, over the past three years I’ve also seen a lot of people use their phones for good. Some use them to self-publish books or take online college classes. Others become prison reform advocates, teach computer skills, trade bitcoin or write legal briefs. I’ve seen a whole plethora of savvy and creative uses that fly in the face of stereotypes about people behind bars. “Our cell phones have saved lives,” a man in prison in South Carolina told me. “There’s times we’ve called up front to the administration building for help, when something happens and there aren’t enough officers here on the unit.”

He, like the others quoted in this story, asked to remain anonymous. Although some jails and prisons have allowed prisoners to have cell phones, since most don’t, there are major risks to having illicit electronics. Getting caught with a contraband phone can result in losing privileges, spending months in solitary confinement or catching a new criminal charge.

“We have to acquire contraband phones from the people who are supposed to be watching us,” a man incarcerated in California told me. “That’s the only way we can do things to better ourselves because they damn sure don’t offer that stuff here.”

For some people, the risks are worth the opportunity. From education to activism to medical care, here are some of the unexpected ways people use cellphones inside.

Some men use their phones to take online classes, posing as regular students in the free-world, a ruse that only works in the age of Zoom classrooms and online meetings. Others read digital versions of books that are banned behind bars, or teach themselves new skills by watching videos on YouTube and TikTok. A few men told me that was how they learned to fix broken phones and make spare parts. For some, it became their prison hustle: If your phone breaks, or you need a cord made out of some random wires, these are the guys you go to. One man explained to me how he wrote and self-published a book through his phone. When he told me the title, I tracked it down on Amazon and noticed there was no way an average reader could tell how (or where) it had been written.

One of my favorite examples of the ways people use their contraband phones came from a man locked up in Georgia, who’s been using a group messaging app to help educate people incarcerated in other states.

“I run a group where we’re teaching guys computer science,” he told me on a call. “We’re using Harvard’s CS50 materials; they have all their materials online. There are a bunch of schools that do that, but I find Harvard’s are the best, and that professor — David Malan — I think he’s one of the best. We have about 300 people doing this right now. It’s a self-guided, self-graded class.”

Given how spotty the healthcare is in many prison systems, people behind bars sometimes use their phones to take care of basic medical needs that staff do not address.

“There is no real medical care in Georgia,” a prisoner there told me. Instead, he said, men use the internet to diagnose their own maladies. “A guy down the row from me went to medical, and they told him, ‘No, you just need a Tylenol,’ and he took his symptoms and went to WebMD,” the man continued. “It told him he had a urinary tract infection, so he bought black market antibiotics, and he’s going to take them and see if he gets better.”

A couple of years ago, a man at a federal prison in Mississippi explained to me how he used online tutorials to figure out the best way to stitch up the gash on another man’s leg using dental floss, triple-antibiotic ointment and Super Glue. He took pictures each step of the way, to document the process which, as sketchy as it sounded, somehow did not result in infection.

The South Carolina prisoner said that in addition to using phones to call officials for help, sometimes the men call each other when they’re on lockdown and in need of emotional support or spiritual advice.

“I am actively praying for these guys and encouraging them,” he said. “We all need somebody who’s an anchor for them. And some people don’t have that. So that’s what I try to do is be that guy for the least of these.”

Even though contraband phones can cost anywhere from around $300 to $6,000, sometimes the devices pay for themselves, because a lot of prisoners use them to earn money. One Texas prisoner I interviewed had been selling his artwork online, while others say they have used their phones to learn how to trade stocks or do online gig work.

More commonly, I know guys who use their phones to get work as freelance writers. You might read their stories and not even know the author penned them from prison. Unfettered internet access makes research quicker, and one man explained that a pricey contraband phone can still end up being cheaper and more reliable than communicating in approved ways.

“Typewriter ribbons here are extortionately priced,” one federal prisoner explained. “Talk-to-text makes writing articles so much cheaper, even including the cost of the phone and the rate plan.”

A man in Texas boasted about his bitcoin trading prowess and sent screenshots of his account balances as proof, though he later lost access to the money when a guard confiscated his phone.

Some people earn money by renting out their phones or charging people to use them as hotspots to secretly connect their prison-issued tablets to the internet.

“You can buy hotspot time for $1 a day,” a prisoner in one Southern state told me. “A dollar is two ramen noodle soups, and that’s how it’s paid for.”

Perhaps predictably, prisoners also commonly use contraband phones to fight the system. For a lot of people, that means doing legal work — both for themselves and for each other.

“I have been helping two guys,” a man in federal prison told me. “I already won a discovery request for the one, which is extremely hard to do. And I’m helping numerous inmates in the grievance process.”

With phone and internet access, the federal prisoner told me, he was able to do research online even when lockdowns and short-staffing made getting to the prison library difficult.

But some people aren’t as inclined to attempt legal work themselves, so over the years I’ve met a handful of men who ran their own innocence campaigns —– posting on Instagram, tweeting press releases and once, even coordinating a fundraiser barbecue in the free world —  in the hopes of getting enough money to hire a lawyer.

And when freedom or a reduced sentence isn’t a viable option, some people instead take to advocating for better conditions, by posting videos online, brazenly emailing complaints to the Department of Justice or slyly sending tips to reporters — like the fake blonde who messaged me. Still others push for policy changes by using their phones to organize protests over bad conditions and unpaid labor. Last year, Alabama prisoners took cell phone pictures documenting the meager meal portions and inedible food officials served during a weeks-long work strike. Eventually, those images made it into court filings in the federal government’s ongoing lawsuit over Alabama prison conditions.

One of my favorite examples of covert advocacy was a man in a different Southern prison who used to pose as his own father and call to complain about mistreatment. It was a ruse even more brazen than it sounds, because he had to contend with the possibility of prison officials hearing the facility’s public-address system in the background.

Some prisoners are far less enterprising with their electronics and use them a lot like the rest of us: They make TikToks, listen to music, post on Facebook and tweet about their daily lives. A few guys I know have used their phones to find love online, sometimes through dating apps, and sometimes by reconnecting with old flames.

Most tell me they rely on it as an easier way to connect with their families, especially elderly parents who can’t visit in person and may have a hard time registering for the prison’s approved phone system.

“I was able to FaceTime my mom before she passed away,” a federal prisoner who used to have a contraband phone told me. “She was so far gone with COPD that she wasn't able to travel for years, so no visits. When she went home with hospice care, I was able to see her and talk to her before she died.”

When the California prisoner I spoke to got his first phone about a decade ago, the first thing he did, he said, was call his wife and ask to speak to his son. Ordinary uses like that, he said, are why most people in prison want phones.

“I mean, there are some people where you might have legitimate concerns about them having phones, and they might want to order a hit,” he said. “But in the prison I’m at, the only thing we want to order is a pizza.”

Unfortunately, even with a contraband phone, some things just aren’t possible in prison.