As COVID-19 fear grows among prisoners and guards, concerns rise about possible unrest. 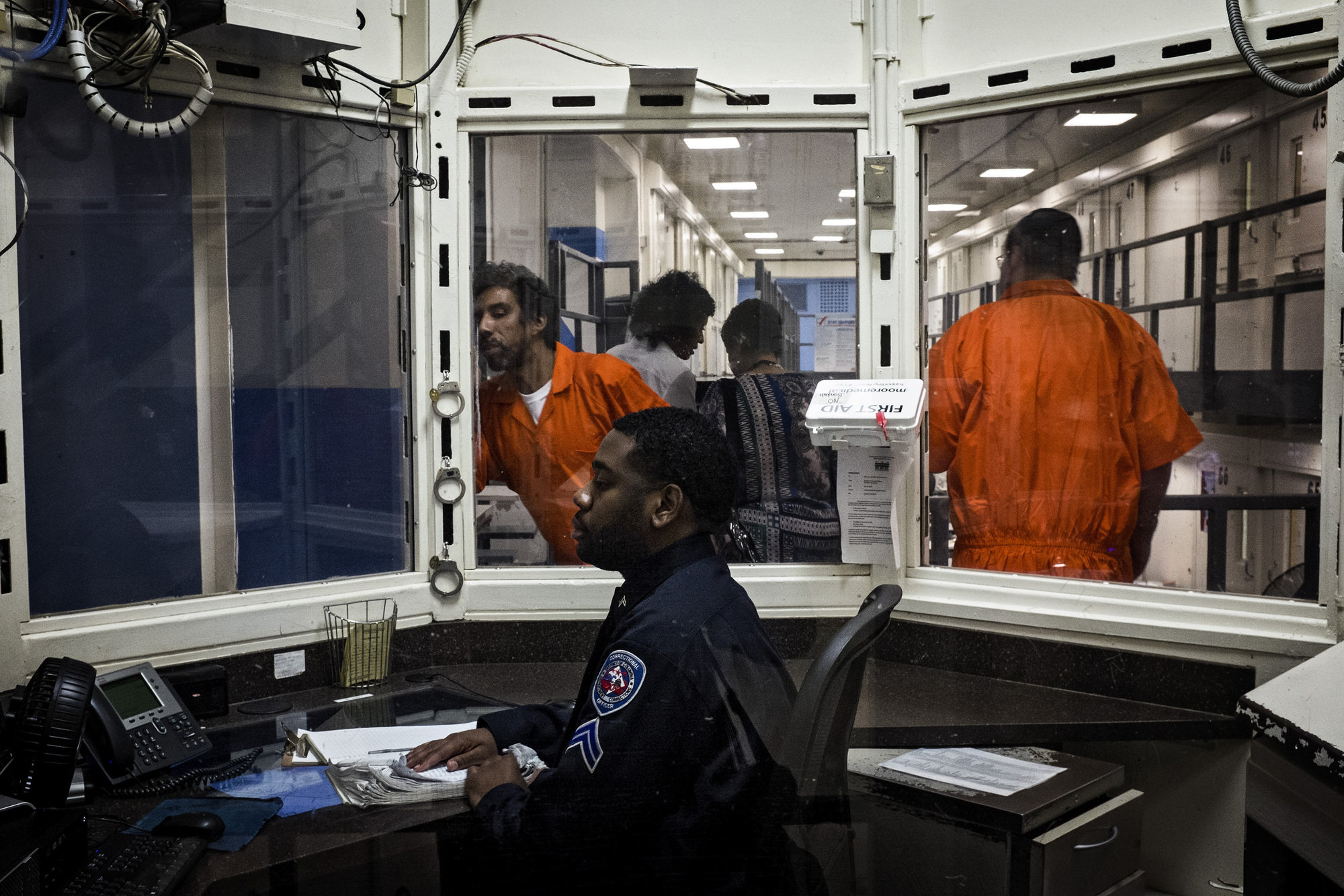 In the grainy cell phone video, the prison block is dim and the shouting muffled—but the sight of wafting, gray smoke is unmistakable.

“It’s a nonviolent protest going on right now because the officers, in the middle of the coronavirus, have refused us electricity for several hours, no showers or anything,” a man says in the recording, apparently made last week. The smoke, he explains, is from fires set by Texas prisoners desperately hoping to attract attention from higher-ups because they couldn’t turn on their cell fans or clean themselves during the pandemic. The Marshall Project is not publishing the video or naming the prison out of concern for the man’s safety.

Afterward, a prison spokesman said he had no record of the incident or its resolution. But some worry this sort of unrest could escalate in lock-ups across the country, especially as restrictions tighten. The federal Bureau of Prisons, for example, announced Tuesday a 14-day lockdown at all its facilities to slow down the virus. Prisoners and guards nationwide are fretting, and some say fears will skyrocket as more people inside begin testing positive.

“Word of that is going to spread like wildfire and that’s when you’re going to have the panic and the problems,” said Frank AuBuchon, a criminal justice consultant and former Texas prison official. “This is truly unprecedented, having to lockdown a prison for an absolutely unknown amount of time due to a medical emergency.”

Across the U.S., prison and jail officials have shut down visits and programs as the pandemic grows, leaving those inside with severely limited access to their families, attorneys and educational opportunities—all the things that might help ease tensions in an already anxious time.

Authorities say they are seeking to limit the risk of an outbreak inside their facilities, for the benefit of both staff and those they guard. In some areas, they are allowing those detained more calls to family. Some locations have released hundreds of people.

Similar heightened restrictions led to riots and mass escapes in countries like Italy, Colombia and Thailand.

There have not been widespread outbursts of violence in the U.S., though signs of stress are beginning to show. In Washington state, a dozen people escaped from a county jail last week over fears of coronavirus, and in South Dakota the Rapid City Journal reported that a prison warden resigned after nine incarcerated women fled a unit where another woman tested positive for the virus. The head of the prison oversight authority in Nebraska said there was an uptick in illicit drinking and drug use last weekend in the state’s largest prison. Meanwhile, in Alabama, widely-shared cell phone footage showed two ICE detainees in the Etowah County jail apparently threatening to jump off a second-tier walkway and hang themselves with makeshift nooses, allegedly because they believed three newly booked people had the virus.

Sheriff Jonathon Horton this week confirmed to The Marshall Project that the video was taken in his jail, but described the footage as a “hoax,” saying that he believed the men staged the outburst to send to national media. He said none of the detainees tested positive for COVID-19, and that the chaos subsided after officials moved the new detainees to another part of the jail.

Prisoners have good reasons to be scared. People who are locked-up typically have spotty access to health care and many are medically high-risk. Many lack basic hygiene supplies, are generally not allowed to use hand sanitizer, cannot practice social-distancing and often live in overcrowded dorms or pods.

“It is impossible to stay calm, people are panicking and nobody wants to die in jail,” more than a dozen inmates in a Houston jail wrote in a letter last week. “We are passing through a very difficult situation in here including tremendous stress, anxiety, fear, depression and worried about our families and our cases.”

It’s not just prisoners who are beginning to panic; officers are afraid, too.

“Most riots happen because of medical reasons or food,” said Anthony Sanon, a corrections officer and president of the union local for staff at the federal Metropolitan Detention Center in Brooklyn. “At any time this could turn around against us and we could have a situation on our hands nationwide.”

Hundreds of prisoners and corrections officers have tested positive for COVID-19 at facilities from New York’s Rikers Island to the Los Angeles County jail. The Bureau of Prisons reported its first prisoner fatality on Saturday, at a struggling facility in Oakdale, Louisiana, where a second death was confirmed Wednesday. The bureau reported 11 incarcerated people had tested positive at Oakdale as of Wednesday afternoon, the largest number of any federal prison. A union leader there described the prison to VICE as “ground zero” for the disease.

Experts worry that effects of the pandemic will worsen understaffing in many parts of the country. Recent figures compiled by The Marshall Project show 20 states had guard vacancies of 18 percent or more.

In Washington, D.C, the jail union this week announced that officers would no longer make security rounds, citing concerns about a lack of testing and personal protective equipment, as well as a growing number of quarantine- and sickness-related absences.

“Soon the jail will have no corrections officers,” union officials wrote in a press release that said remaining officers would “shelter in place” at their workstations. The union is also supporting a lawsuit over poor conditions inside the jail. A jail spokeswoman did not respond to a request for comment.

In Nebraska’s overcrowded and understaffed prison system—which has had two deadly riots in the past five years—staff reported concerns about being forced to live at the prison in the event of a quarantine, said Doug Koebernick, the inspector general who monitors the state’s prison system.

“They have received no training or plans,” he said, adding that their worries could prompt more officers to stay home.

In federal prisons, where officials reported 57 prisoner and 37 staff positive tests as of Wednesday afternoon, officers have repeatedly voiced concerns about safety—both regarding disease control and the potential for violence.

“It’s just crazy. They’re forcing staff to walk into these (quarantined) housing units without any type of protection at all,” said Sanon.

At the Brooklyn federal facility, which has a 1,740-person capacity, Sanon said officers aren’t getting access to N95 masks. People detained are still being transferred in and out of the prison, and moved around the country on a daily basis and “spreading disease from institution to institution,” he said.

The prisoners are not getting masks either, Sanon said. This week some of them refused to help deliver commissary orders to a housing unit that was supposed to be on quarantine because they feared going in without protective gear.

A bureau spokesman said in a written statement that prisoner transports are down significantly systemwide and that they’re following Centers for Disease Control and Prevention guidelines on the use of protective gear.

The new 14-day federal lockdown comes as a double-edged sword: While the isolation might help slow the disease, it could increase tension and fear.

But there doesn’t seem to be an easy or clear solution. In the short-term, better access to sanitation and protective gear for prisoners and officers could help dampen the spread, Sanon and others said. AuBuchon, the criminal justice consultant, suggested allowing staggered out-of-cell time even for prisoners who are normally in solitary confinement, in the hope of easing tensions. Advocates have repeatedly pushed for the release of medically fragile and aging prisoners.

But those steps won’t solve the understaffing and overcrowding that plague so many prison systems—and if officers start calling in sick in large numbers, problems could escalate quickly.

“There won’t be anybody to guard the place,” AuBuchon said, thinking of the Texas prison system.