How Did They Run an Elaborate “Sextortion” Scam From Prison? Cellphones.

Victim’s family pushes for a high-tech crackdown—but it may not work. 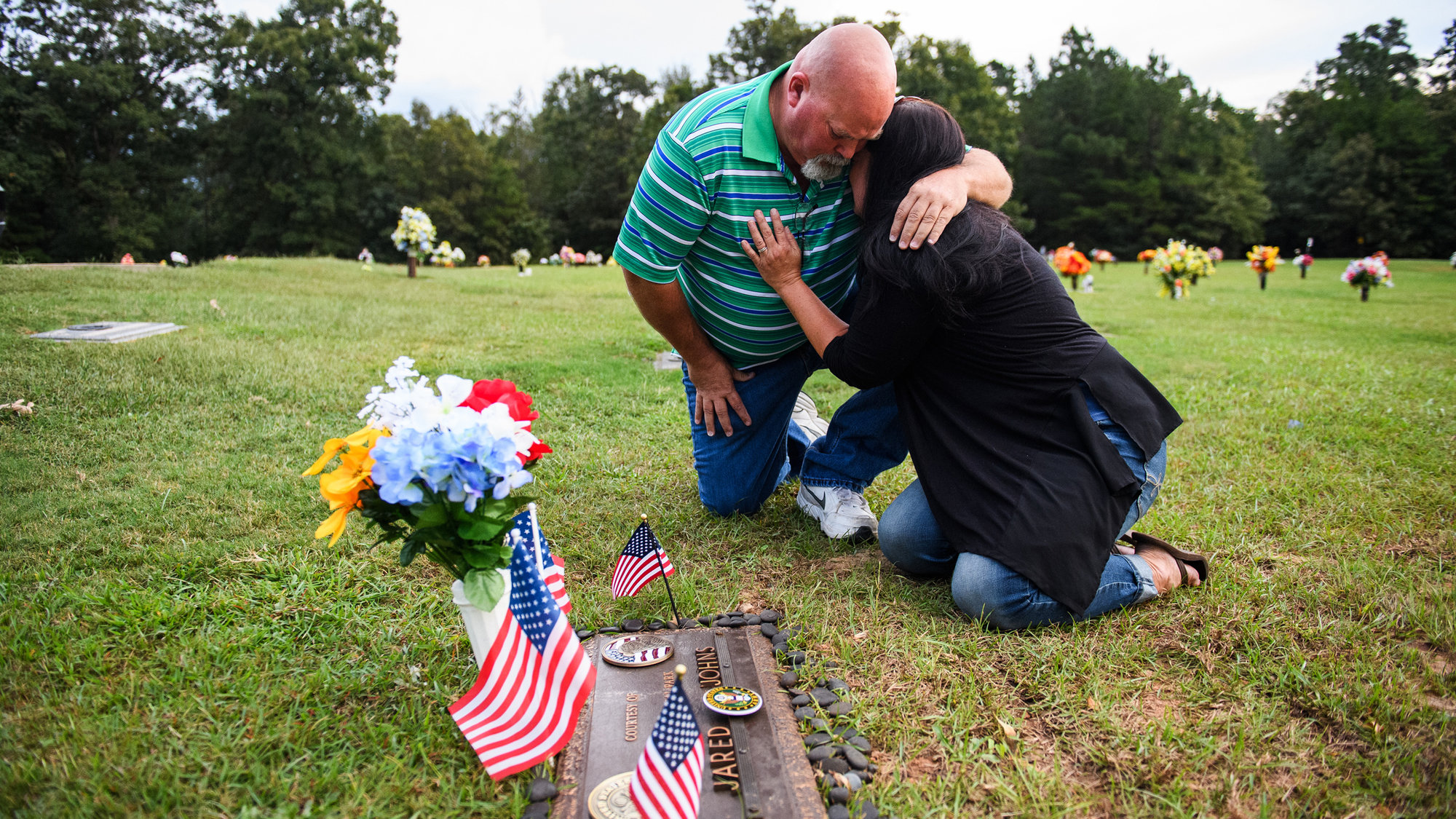 GREENVILLE, S.C.—Just before noon on Sept. 11, 2018, a former Army private named Jared Johns lay down on his bed, turned on his iPhone’s camera and said goodbye to his family.

Toward the end of the two-minute video, Johns’s eyes widened as he read a text message on his screen: “She is going to the police, and you are going to jail,” it read.

Johns, who had served in Afghanistan, took a deep breath, placed a 9 mm handgun under his chin, and pulled the trigger.

This story is published in collaboration with the USA TODAY Network-Greenville News.

The 24-year-old veteran was one of hundreds of former and current service members who have been targeted in a “sextortion” plot. The scheme that led to his suicide involves scam artists posing as underage girls on dating sites who then attempted to blackmail men who responded to their lures, prosecutors say. 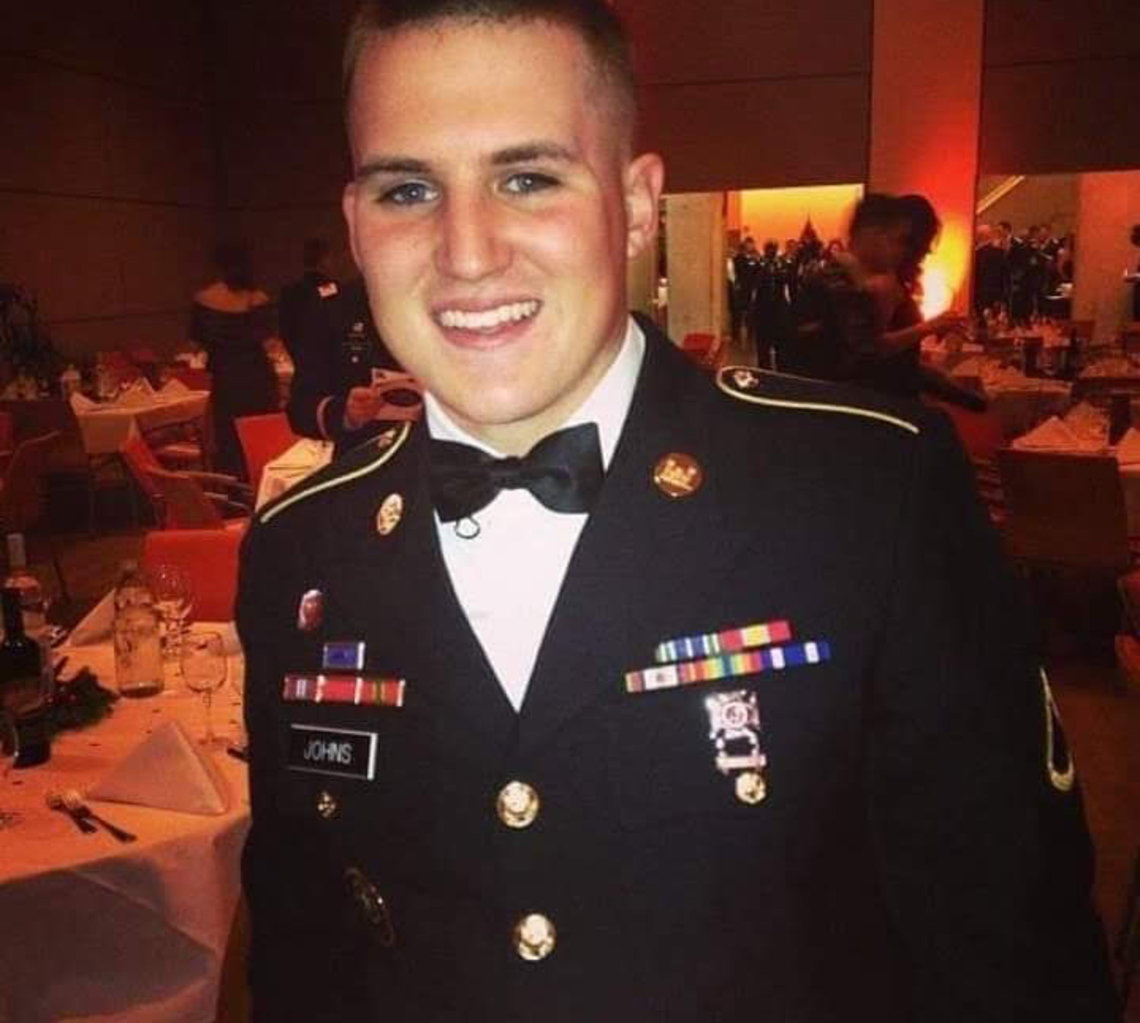 Jared Johns, who had served in Afghanistan, at a military ball in Vilseck, Germany, in 2013.

But the most startling aspect of the plot in Johns’s case was that it was allegedly carried out by inmates at Lee Correctional Institution, a maximum security prison in South Carolina about 150 miles east of Greenville. And the inmates did it using smartphones — banned devices that should have been blocked by the prison’s $1.7 million “managed access system.”

Now prison officials and some federal agencies have proposed purchasing an even more complex and potentially more expensive technology to stop illicit cellular and Wi-Fi messaging from contraband phones in prison: a jammer that will block all calls within its range.

“Inmates are incarcerated physically, but they’re still free, digitally,” said Bryan P. Stirling, the director of the South Carolina Department of Corrections, who has been on a mission to get signal jammers in prisons since 2009.

But some experts warn that jamming technology, which the federal Bureau of Prisons recently tested in a South Carolina prison, could put the public at risk by interfering with 911 calls and other cellphone service nearby; for rural prisons, the concern focuses on drivers on local roads and highways. Plus, they say, the technology probably won’t work.

“They’re taking an internal problem and impacting people who are not involved,” said Richard Mirgon, a former executive at the Association for Public-Safety Communications Officials. “It’s tantamount to saying, ‘Why not jam up the freeway to keep people from speeding in the side streets?’ It’s just so extreme.”

The best solution, according to telecommunications companies and advocates for prisoners’ rights, would be to stop the influx of cellphones into prisons. But that has proven to be difficult, especially at a prison like Lee, which has a long history of serious phone-related incidents. Inmates there have used contraband cellphones to, for example, order a hit on a corrections officer who was shot almost to death in 2010 and to publicize prison riots twice in the last four years. 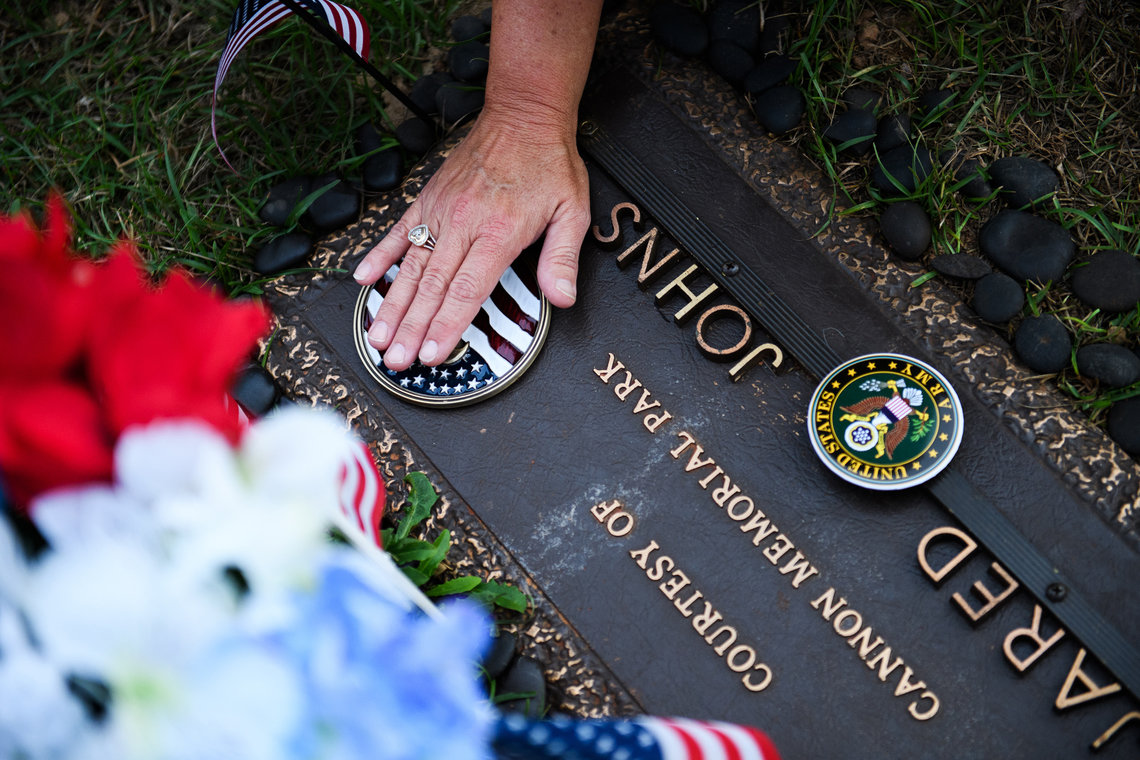 Prison officials at Lee say they have tried to stem the tide. In 2017, the corrections department felled large trees that loomed over the prison to stop drones from dropping off packages of cellphones. That same year, the department spent $8.3 million to install 50-foot netting at the perimeter of its prisons, including Lee, in hopes of stopping couriers from throwing backpacks of cellphones over fences.

Corrections officials say these solutions reduced the number of cellphones in state prisons. In fiscal 2017, prison guards confiscated 7,482 phones, batteries or chargers in the state’s facilities, which house more than 21,000 people. In the fiscal year that ended in June, officials collected 3,900. Chrysti Shain, a spokeswoman for the corrections department, said that inmates now must spend thousands of dollars to acquire a phone.

In the year ending with June 2017, corrections officials in South Carolina confiscated 7,482 phones, batteries and chargers in the state’s prisons. Two years later, they took roughly half as many.

Yet, the department acknowledges phones still get inside. Experts point to low-paid guards and prison workers who can augment their low pay by selling inmates contraband.

But even if cellphones get in, there should be no calls getting out. That’s because of the nearly $2 million in technology that Lee officials purchased to block calls from unauthorized phones.

In 2017, after clearing the treeline and setting up the nets, the corrections department hired Tecore Networks, a communications company, to install the system that is supposed to detect and block all calls made from contraband phones. The technology is supposed to work like this: If someone makes a call, the system compares the cell number to a predetermined list of prison staff’s phone numbers—called a white list—and then either allows the call to go through, or blocks it.

The wireless telecommunications lobby group CTIA, which represents some of the country’s largest carriers and equipment manufacturers, has recommended that prisons use the managed access systems, as they are called. But it’s unclear how many facilities across the country actually do. Shawntech, another private company that sells managed access systems to correctional institutions, says it provides the multi-million dollar systems to close to 350 jails and prisons.

Even engineers who back the system as a solution warn that it’s not a silver bullet to stop all illicit calls, which can circumvent the system because of a very basic rule of how a cell tower works: If you can’t see it, it can’t see you.

When someone inside makes a phone call, the closest cell tower will pick up that signal. In a prison with a managed access system in place, the tower is usually located within the perimeter. But, for example, if an inmate stood behind a wall with water pipes (radio waves can’t easily pass through water), the cell signal will find the closest tower it can see, which would be outside the prison.

Also, cell companies often change the strength of a signal if customers in an area have bad reception. It’s like listening to two conversations happening at once in the same room;  it’s easier for you to hear the loudest speaker. Whenever cell companies boost a signal, cellphones inside the prison will be able to find it more readily. It’s a problem that Tecore flagged in a 2018 news release. 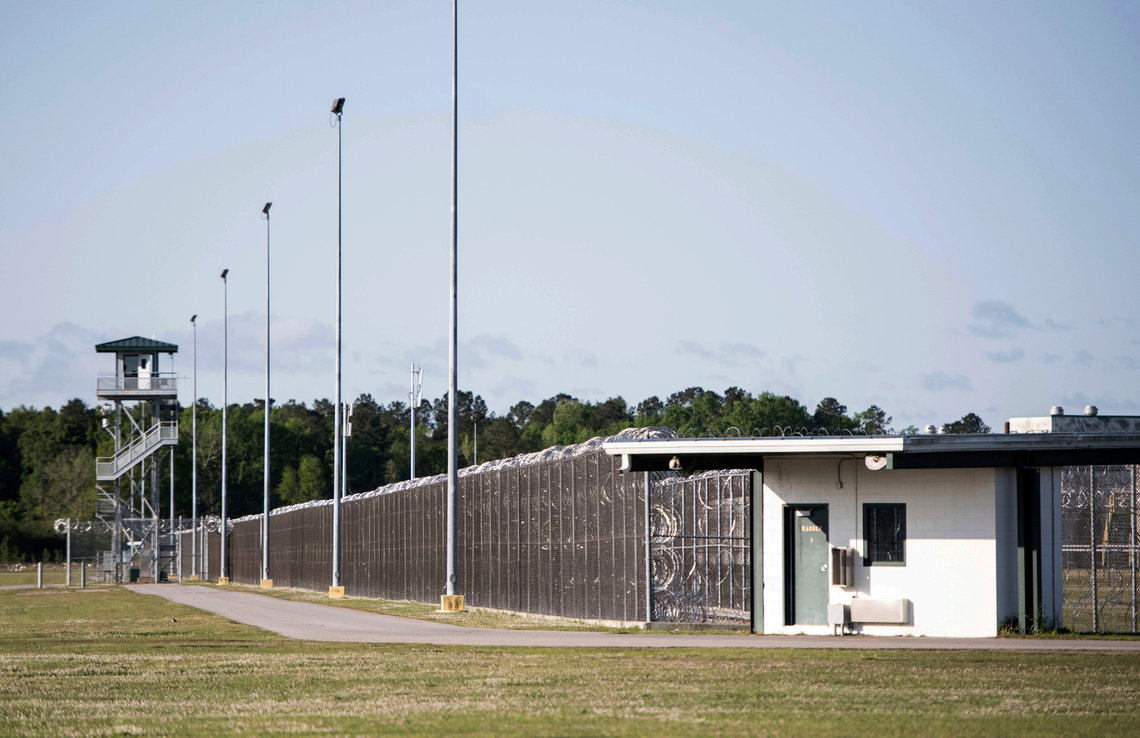 The Lee Correctional Institution in Bishopville, South Carolina, in 2018.

That’s what South Carolina’s corrections officials say happened at Lee, and how the inmates contacted Johns in the first place.

Current and former prisoners at Lee said they could use cellphones easily, even with the managed access system in place. This year, inmates at Lee were caught live streaming on Facebook.

“Walk into one room, and it’s fine; walk into another and you won’t be able to,” said a current inmate in the prison, who said he has used a prepaid Boost Mobile cellphone to make calls. His identity is not being revealed out of concern for his safety.

Tecore, which manages the prison’s system, did not respond to multiple emails or calls over several weeks seeking comment.

These problems explain why corrections officials and federal agencies have proposed using technology long opposed by the communications industry: cellphone jammers to stop all calls, even from phones owned by staff or emergency workers.

Unlike managed access systems, which allow people to make calls if their numbers are on an approved list, a jammer is indiscriminate in its reach and power to block all frequencies, including data and Wi-Fi. That’s a problem for the nation’s 911 phone system, which operates on a frequency close to the one commercial carriers use.

Only federal authorities can legally use jammers, and only in limited circumstances involving national security. But with the blessing of the FCC’s Chairman Ajit Pai—appointed by President Trump in 2017—and the U.S. Department of Justice, prison jammers could become a possibility.

In September, the department and state officials put out news releases saying that a test at South Carolina’s Broad River Correctional Institution showed that a micro-jammer could block calls inside a cellblock while allowing “legitimate calls” a foot outside its walls.

But a technical report on the same test by the National Telecommunications and Information Administration was squishier. It noted that the test involved only one of the 14 jammers required to block calls in half the cellblock. And it found that jamming was detected at least 65 feet away, though it said it was unclear how significant that interference would be to regular cellphone service.

The telecommunications agency would not comment on the study.

Precise jamming—limited to a specific distance and also only to cellphone frequencies—is prohibitively expensive, especially for larger correctional facilities, said Ben Levitan, a technical engineer who has worked with the South Carolina corrections department in the past and read the NTIA’s report.

That kind of jamming is “cool in theory, but it’s impractical,” he said.

A 2018 T-Mobile report also concluded that jammers with the precision to overpower only phone frequencies up to a certain distance would generally be too expensive for prisons.

In Johns’s case, inmates at Lee used smartphones to pose as girls on the dating app Plenty of Fish. After they got a response, the inmates would impersonate the girls’ parents, saying the women were underage, asking for money or threatening to go to the police.

The scammers demanded just over $1,100 from Johns. A single father who was already struggling with mental-health issues, Johns couldn’t afford that.

Three weeks after his suicide, Johns’s mother, Kathy Payne-Bowling got a Facebook message asking her to contact an inmate at Lee. She told her ex-husband, Kevin, who talked to the inmate and was told that other prisoners had made the calls to their son.

“I couldn’t believe it when I found out,” Payne-Bowling said. “These guys, they’re not supposed to have phones in the first place!”

The family contacted the police, and within a month the local district attorney’s office charged two inmates with blackmail in relation to Johns’ death. They have pleaded not guilty. No trial date has been set.

The U.S. attorney in South Carolina also charged 15 people, including five Lee inmates, in a similar scam in 2018. Prosecutors say the alleged perpetrators extorted nearly $560,000 from 442 service members. Three inmates pleaded guilty earlier this year, as did seven people on the outside who helped orchestrate the scheme.

The Johns family plans to testify in favor of legalizing jammers at a Senate hearing later this year.

But the family blames corrections officials for not doing more to prevent inmates from getting phones in the first place.

Joseph Darius Jaafari is a Tow Fellow specializing in the military justice system. His reporting on crime and LGBTQ issues won him three honorable mentions for his documentary, “WOOF: A Barkumentary,” which looks at abuse within the gay community.