How Police Unions Try to Tilt the Scales on Oversight Boards

As more cities set up police watchdogs, some officers’ unions seek new ways to try to weaken them. 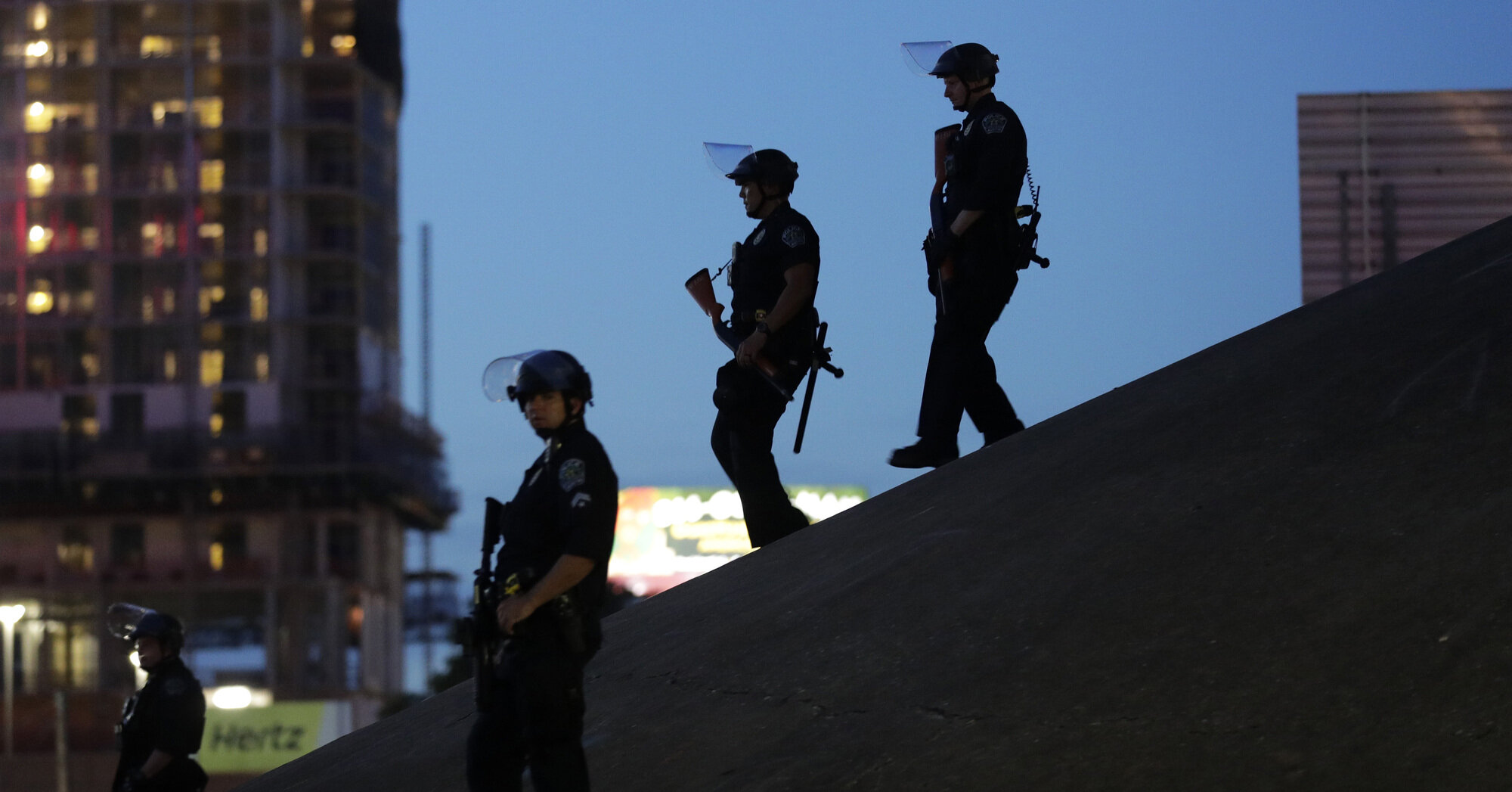 Police watch as demonstrators gather in downtown Austin, Texas, to protest the death of George Floyd in 2020. Eric Gay/Associated Press
By Jamiles Lartey

If you heard about a group called “Voters for Oversight and Police Accountability,” who would you guess is funding and coordinating its efforts? Progressive activists? Civic-minded community members?

How about a police union?

That’s the situation in Austin, Texas, where this fall, canvassers for “VOPA” appear to have amassed the 25,000 signatures needed to get a referendum on the so-called “Austin Police Oversight Act” into the city’s May 6 election.

The thing is, there was already an “Austin Police Oversight Act” on the ballot. The duplicate effort, funded by the Austin Police Association, is similar — but seriously watered down, when compared with the original promoted by the progressive political action committee Equity Action. That original proposal seeks to open up public access to police records, and give the city’s office of police oversight the ability to participate in investigations of officer conduct.

By contrast, the police union-funded ballot initiative would keep certain misconduct records hidden from the public and leave the board with a more passive role in investigations.

Reporting late last year found that the police union was running VOPA’s website, and this week, a reporter with the Austin Chronicle uncovered that the union had contributed virtually every penny of the nearly $300,000 raised for the campaign. The union did not respond to a request for comment from The Marshall Project, and has not responded to a request from the local Fox affiliate.

The effort appears to be a brazen version of something police unions have attempted in numerous cities recently: to derail and disempower civilian oversight groups tasked with monitoring and reviewing police conduct.

According to the National Association for Civilian Oversight of Law Enforcement, there are at least 200 such oversight agencies in the country, and most large cities have one of some kind. The structure and authority of these boards vary greatly. Some are merely advisory, while others have authority to obtain records, conduct investigations and have input in official discipline.

City governments routinely change these oversight bodies based on the local politics at that moment. Baltimore, Maryland, is in the process of rolling out a newly emboldened board, while this week in Albuquerque, New Mexico, a city councilor proposed abolishing their oversight board and replacing it with a smaller, less powerful civilian panel. One state lawmaker told the Albuquerque Journal the change is a “done deal.”

Cities often turn to oversight boards after high-profile cases of police violence. Voters in Akron, Ohio, for example, recently decided to launch one partly in response to the fatal June 2022 police shooting of Jayland Walker, a 25-year-old Black man. There is little empirical evidence on the efficacy of these boards, but supporters say they can be a powerful check against abusive police power.

Abigail Cerra, the former chairwoman of the Minneapolis Police Conduct Oversight Commission, said oversight groups are an important check on police authority. “Without any such check or oversight, people like Derek Chauvin are allowed to abuse their position with impunity,” said Cerra, referring to the officer who murdered George Floyd. Minneapolis was among the cities where the oversight structure was overhauled in the past few months. Cerra opposed those changes, and resigned last spring over frustration with the process. She said an intentionally weakened board can be worse than not having one at all. “It can lull people into thinking there is some level of accountability when there isn’t,” she said.

Resistance to oversight boards comes primarily from pro-law enforcement groups, especially police unions, who often make concerted efforts to dilute the power of the boards. Law enforcement voices frequently argue that civilians, by definition, don’t have the right knowledge to evaluate police actions. “It would be akin to putting a plumber in charge of the investigation of airplane crashes,” said Jim Pasco, executive director of the national Fraternal Order of Police, told the Washington Post in 2021.

When they can’t stop these oversight agencies, or weaken their powers, police unions sometimes seek to have allies placed in vacant board positions. In Chicago, where proponents recently won passage of a new oversight structure, WBEZ reported this week that the largest local police union is spending money “in an attempt to extend the union’s power into a domain created specifically to oversee the officers who make up the union’s membership.” It’s common for negotiations about oversight bodies to include debate on whether people with close ties to the police (like former officers or family members of officers) are eligible to serve.

On the other side of the spectrum, some police abolitionists push back against these boards, arguing that they work “against deeper change.” It’s also not uncommon for community activists who initially back oversight boards to turn against them over time, frustrated by a lack of results.

That’s how things are playing out in Dallas, where activists and board members are both expressing frustration with a board that had its powers expanded after the 2018 killing of Botham Jean by then-officer Amber Guyger. One board member told Bolts Magazine that their efforts were being “stonewalled,” “marginalized” and “put in a corner” by the department’s non-cooperation.

The political wrangling about oversight boards is only one way that police departments and unions push back on accountability. In Boston, which rolled out its own independent watchdog body in 2021 (to mixed reviews), Mayor Michelle Wu is currently locked in a battle over the police union contract, and her desire to strengthen the disciplinary process for officer misconduct. Despite diminished public trust in the police, writes the Boston Globe, “History is not on Wu’s side.”