Right and Left Unite on Drug Sentencing. What Could Possibly Go Wrong?

As advocates of criminal justice reform cheer the growing bipartisan support for changes in drug-sentencing laws, one tough-on-crime senator remains unconvinced. Charles Grassley, Republican of Iowa, is a long-time champion of the mandatory minimum sentences that have been blamed for filling American prisons with large numbers of non-violent offenders. And when the new, Republican-controlled Senate convenes in January, Grassley, as chairman of the Senate Judiciary Committee, will play a key role in deciding what crime legislation reaches the Senate floor.

That’s left many wondering: could his promotion be a dead end for sentencing reform?

The Smarter Sentencing Act, which would reduce mandatory sentences for nonviolent drug offenses, has attracted such conservative cosponsors as Ted Cruz, Rand Paul and Mike Lee. It brings together the Heritage Foundation and the ACLU, the Obama administration and much of the Republican 2016 presidential field. But not Senator Grassley. 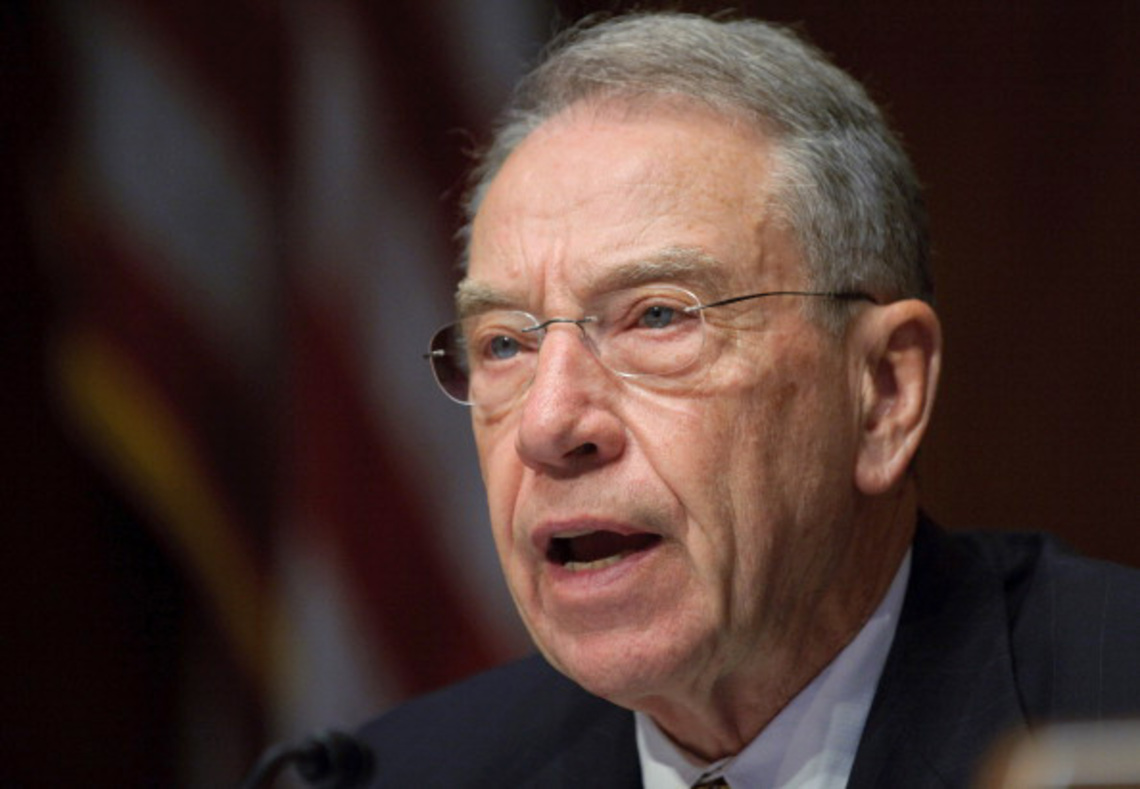 Senator Chuck Grassley at a Senate Judiciary Committee hearing in May.

“Current mandatory minimum sentences play a vital role in reducing crime,” Grassley said in May, in one of several statements explaining his opposition to the bill. Reducing prison populations, a cause that has won increasing favor from conservatives, “is not really so much about cost saving as cost shifting from prison budgets to victim suffering,” he added.

When the Judiciary Committee voted on the Smarter Sentencing Act in January, Grassley added an amendment to create new mandatory minimums for sexual abuse, domestic violence and certain terrorism-related charges. He was one of five senators on the 18-member committee to vote against the bill. If passed, the Act would reduce 20-, 10- and 5-year mandatory minimums for drug offenses to 10, 5 and 2 years. It would also widen the exceptions to such mandatory sentences to include non-violent offenders with more than one criminal history point, based on prior convictions and the length of previous sentences.

The Smarter Sentencing Act was voted out of committee in January but has since stalled — due in part to pushback from Senators Grassley, Jeff Sessions and John Cornyn. If the bill is not brought to a floor vote before January, it will have to be reintroduced next year and come through Grassley’s committee for hearings, analysis and amendments – a process he could delay indefinitely.

Democratic Senator Dick Durbin, who introduced the bill with Republican Senator Mike Lee, hopes the bill is voted on in this session, before Grassley has a chance to stop it, according to a spokesperson.

Others aren’t so optimistic about the bill’s chances. “The Smarter Sentencing Act is dead,” says lobbyist Greg Mitchell, whose previous clients have included Families Against Mandatory Minimums, the ACLU National Prison Project and the Open Society Policy Center. Mitchell is currently working with a group of former federal prosecutors and Republican lawmakers on federal prison reform. “Grassley is not going to schedule that bill for markup. He has already made it clear that he does not support that and thinks it’s dangerous to public safety.”

There are other criminal justice changes for which Grassley has shown more enthusiasm. He’s been outspoken on the abuses of asset forfeiture and recently expressed concern over the police shooting of an unarmed Virginia man. Most significantly, he was a co-sponsor of Republican Senator John Cornyn’s Federal Prison Reform Act, which would give inmates convicted of nonviolent crimes the opportunity to earn early release through completion of certain “recidivism reduction” programs like classes and in-prison jobs. It aimed to bring state-level policies being used to reduce recidivism and prison populations to the federal system. The bill has since been combined with other legislation into a larger package of reforms co-sponsored by Cornyn and Democratic Senator Sheldon Whitehouse.

Mitchell says proposals like the Federal Prison Reform Act, which have been his firm’s main focus, are easier for lawmakers like Grassley to get behind because they require inmates to “earn their way out rather than just giving them a sentencing reduction up front. I think with Grassley as chairman now the prospects of the Prison Reform Bill are better.”

Advocates of reducing mandatory minimums hope pressure within the Republican Party might still sway him, or manage to push key policies through regardless of his resistance. “While Senator Grassley’s views on mandatory minimums are well known, it doesn’t change the fact that there is enormous support and momentum for sentencing reform in both his own party and among Democrats,” says Molly Gill, government affairs counsel for Families Against Mandatory Minimums, in an emailed statement.

So far, Grassley hasn’t indicated he’s changing his mind. “I’ve raised concerns about people pushing importing [sic] heroin into the country, of having their sentence reduced, I think you gotta’ be very careful what sort of a signal you’re sending,” he recently told Slate.

Grassley has repeatedly highlighted what he calls a “heroin epidemic” as a reason to preserve mandatory minimum sentences for drug offenses. But federal data on heroin use does not support those claims.

His press secretary says he has “not yet laid out an agenda” on criminal justice for the coming session. In a statement announcing his new position, Grassley highlighted his continued focus on strict enforcement of drug laws. “He’s a true advocate for victims of crime and is a leader in the fight to keep illegal drugs out of the hands of young people.”

If Grassley remains opposed to the Smarter Sentencing Act, “he could just bury that thing indefinitely. He controls the agenda almost 100 percent,” says Patrick Griffin, a former lobbyist who lectures on the legislative process at American University. Griffin says there are a few “extreme moves” lawmakers could take to pass the proposal without Grassley, or they could try to add some of the act’s key tenets as amendments to other bills.

Getting it passed without Grassley on board is “not impossible, technically, but I think it would be pretty tough,” he says.