In the case of Mumia Abu-Jamal, Pennsylvania says no.

It was short as commencement speeches go, less than 11 minutes. It touched on environmentalism, scholarship, social change – standard college-graduation fare. But by the time Mumia Abu-Jamal’s pre-recorded speech was played on October 5 at Goddard College in Plainfield, Vermont, it had set off an explosion of anger in Pennsylvania, where Abu-Jamal is serving a life sentence for killing a police officer in 1981.

The day after Abu-Jamal’s graduation speech, state legislators in Philadelphia responded with an addition to the Crime Victims Act called “Revictimization Relief.” The new provision seeks to prevent actions that cause “a temporary or permanent state of mental anguish” to those who have previously been victimized by crime.

Maureen Faulkner, the widow of the slain police officer, “has been taunted by the obscene celebrity that her husband’s killer has orchestrated from behind bars for years,” the outgoing Pennsylvania governor, Tom Corbett, said as he signed the bill. “With books, radio commentaries, and most recently a commencement speech, this unrepentant cop-killer has tested the limits of decency.” 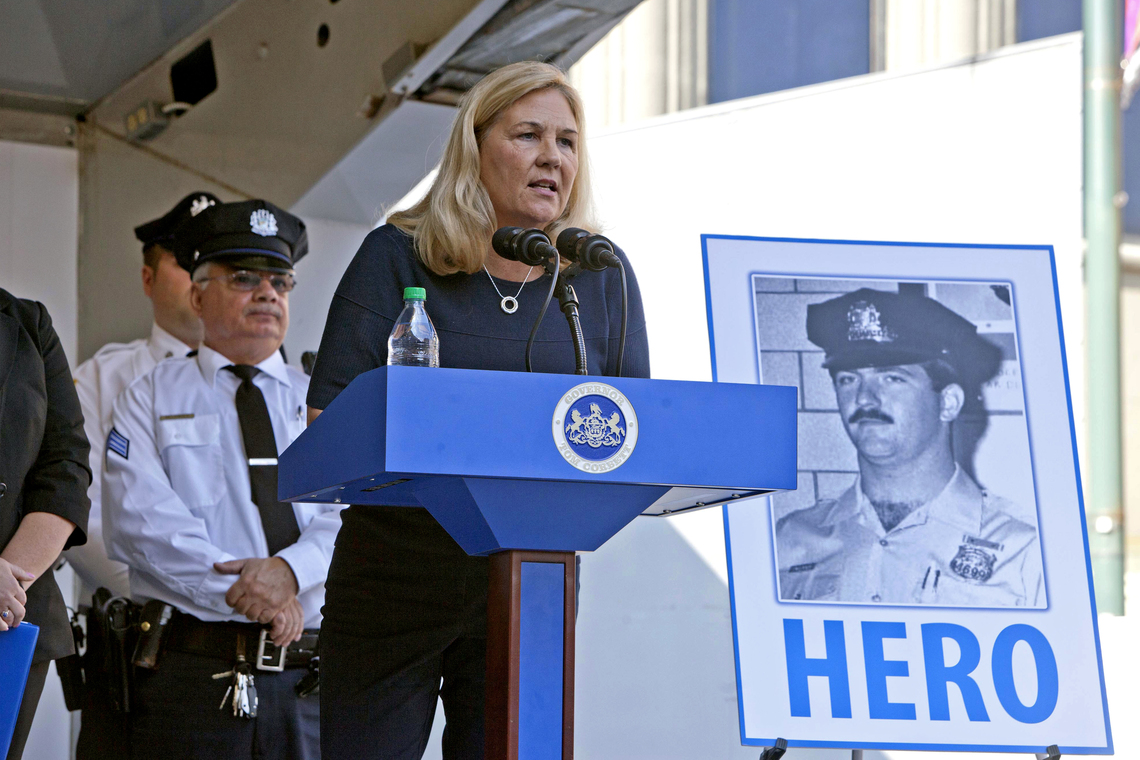 Under the new law, any victim of a “personal injury crime” can petition a judge to stop any “conduct which perpetuates the continuing effect of the crime on the victim.” Under Pennsylvania law, a personal injury crime is one in which another person is injured or killed, but can also include robbery or injuring someone while driving under the influence.

“What it basically does is it allows a victim or their representative to alert a judge to the activity which they feel is revictimizing them—whatever the perpetrator might be doing—and letting a judge decide,” says Representative Mike Vereb, the bill’s House sponsor. The judge could then order “appropriate relief,” which could include an injunction against speaking publicly and monetary damages.

But what kind of conduct the law enjoins is very broadly defined – so broadly, in fact, that the law itself has triggered a second outpouring of outrage – this time from civil libertarians, legal scholars and First Amendment advocates.

“It violates the Constitution straight out,” said Burton Caine, an authority on the First Amendment at Temple University law school in Philadelphia. He said he was confident that the federal courts would strike down the new law as “abridging the freedom of speech.”

The ACLU of Pennsylvania is planning to file suit in federal district court the week of December 8 to block implementation of the law. Another liberal group, the Pittsburgh-based Abolitionist Law Center, has already done so on behalf of Abu-Jamal and others.

“This is a classic prior restraint which the Supreme Court has been very, very reticent to permit, in any situation,” says Sara Rose, an ACLU staff attorney.

Death row cases often receive increased scrutiny, but in the case of Abu-Jamal, a former Black Panther, community activist, and radio journalist, passions run particularly high. (Earlier this year, President Obama’s nomination of Debo Adegbile to head the Justice Department's Civil Rights Division was derailed because Adegbile had worked briefly on Abu-Jamal’s defense team while he was director of litigation at the NAACP.)

The 1970s was a time of deep racial tension between Philadelphia’s mostly-white police force and its black neighborhoods. The police had been the target of several investigations for corruption and brutality, and Abu-Jamal was part of a black nationalist organization with a tense—even violent—relationship with the police.

So when Abu-Jamal was convicted of murdering Faulkner as part of a traffic stop scuffle, his trial and death sentence became a symbol. To Abu-Jamal’s supporters, it was an example of racism infecting the criminal justice system. To police backers, Abu-Jamal’s worldwide support demonstrated a lack of regard for the rule of law and a carelessness about police officers’ safety and sacrifice. Abu-Jamal has always maintained his innocence, and while the evidence is mixed on this, it is clear that the city’s charged racial atmosphere tarnished his trial. He spent almost 30 years on death row before an appeals court agreed that the judge gave prejudicial jury instructions at sentencing, and Abu-Jamal’s sentence was commuted to life without parole in 2011. His ongoing writings and activism from inside prison have made him and his conviction a cause célèbre, a fact that rankles victims’ rights advocates.

The new law never mentions Abu-Jamal, but it was aimed specifically at him. If any other inmate had given a commencement speech, says Terry Madonna, Professor of Public Affairs at Franklin & Marshall College, this bill would not have gained the traction it did. Faulkner’s death is “still a very very emotional issue” in Philadelphia.

Ten days after Abu-Jamal’s address, the new law passed unanimously in the Senate and overwhelmingly in the House. Five days after that, the Governor held a signing ceremony at the corner of Locust and 13th Streets in Philadelphia, where police officer Daniel Faulkner was killed in 1981. The ceremony was just a month before the November elections, and the Republican Governor was in the midst of a losing battle for reelection. (He lost by almost 10 points to Democrat Tom Wolf.)

“One constitutional right that has been overlooked for way too long is the victim’s right to seek redress in civil court,” Corbett said at the bill signing.

Still, even those who have no sympathy for Abu-Jamal say the law goes too far. Philadelphia Daily News columnist Stu Bykofsky—who dubs Abu-Jamal supporters “Mumidiots”—wrote, “stripping all rights from a prisoner is an enjoyable revenge fantasy, but it is part of the gulag, not part of America.” The Central Pennsylvania Patriot-News editorial board—which wrote, “In a perfect world, Mumia would serve his life sentence in the obscurity he deserves”—nevertheless concluded that Maureen Faulkner "does not have the right to be Mumia's censor-for-life…Some victims of terrible crimes will be in a ‘state of mental anguish’ as long as the person who did it to them is alive and breathing. Does ‘breathing’ qualify as ‘conduct’ that's now subject to court action?”

A blanket prohibition, says the ACLU’s Rose, “not only prevents people from speaking, it also prevents the rest of us from hearing what they have to say.” She cites the wrongfully convicted who may fear speaking to reporters or generating public interest in their cases; claims of innocence are often deeply painful to victims’ families. Since the law uses the vague word “offender,” it could also apply to someone no longer in prison. “A lot of people who have served their time are active members of the community—active in community groups, active in trying to keep kids out of jail,” says Rose. “They have a public persona. The victim might not like seeing that person doing interviews for radio or TV.”

Abu-Jamal read his speech over the phone to a producer from Prison Radio, who recorded it. You can hear the din of the cellblock behind him as he remembers the “funky atmosphere” and “green life” of Goddard College, which he attended in the late 70s; he completed a Bachelor of Arts by correspondence in 1996. The speech did not mention Faulkner, the shooting, or his case.

The courts have allowed some limited restrictions on inmate speech in the past. So-called “Son of Sam” laws, for example, limit inmates’ ability to profit from their crimes. (Enacted first in New York, these laws were copied widely after serial killer David Berkowitz was reputedly negotiating a lucrative book deal with publishers. The Supreme Court struck down the original law in 1991, finding that its broad prohibitions violated the First Amendment; more narrowly-worded statutes have survived.) But generally courts have erred on the side of speech, even when weighed against real emotional harm. In 2011, the Supreme Court ruled in favor of Fred Phelps’s Westboro Baptist Church, which had picketed with signs reading "Thank God for dead soldiers" and "Fag troops" at the funeral of a U.S. Marine Corporal killed in Iraq. The Church’s speech was “distasteful and repugnant,” the court wrote, and clearly caused the family emotional distress, but it was protected.

“It’s entirely understandable the victims never want to hear the voice or comments of somebody who caused their family so much harm,” said Ken Paulson of the First Amendment Center. “But the law says, we’re going to permit that speech to ensure the free flow of ideas in a free society. We shouldn’t want it any other way.”

Constitutional scholars expect the courts to strike the law down.

But Representative Mike Vereb, the lead sponsor of the bill in the Pennsylvania House, insists, “We do not under any circumstance have any desire to restrict speech of anyone sitting in prison. All our legislation does is get a victim in front of a judge. And it’s up to a judge to decide if this is a stretch of the First Amendment or not.”

An earlier version of this story incorrectly referred to the post for which Debo Adegbie was nominated.