Our favorite nugget from the torture report.

By Bill Keller and Clare Sestanovich

On December 4, 2002, a delegation from the Federal Bureau of Prisons dropped by CIA headquarters to report on a field trip they had made to one of the agency's detention centers for terror suspects, called Detention Site Cobalt. Cobalt, believed to be located in Afghanistan, was the scene of some of the most brutal abuses itemized in the Senate torture report – waterboarding, rectal feeding, extreme sleep deprivation. Those specialties were apparently not on the tour, but what the Bureau of Prisons experts did see amazed them. 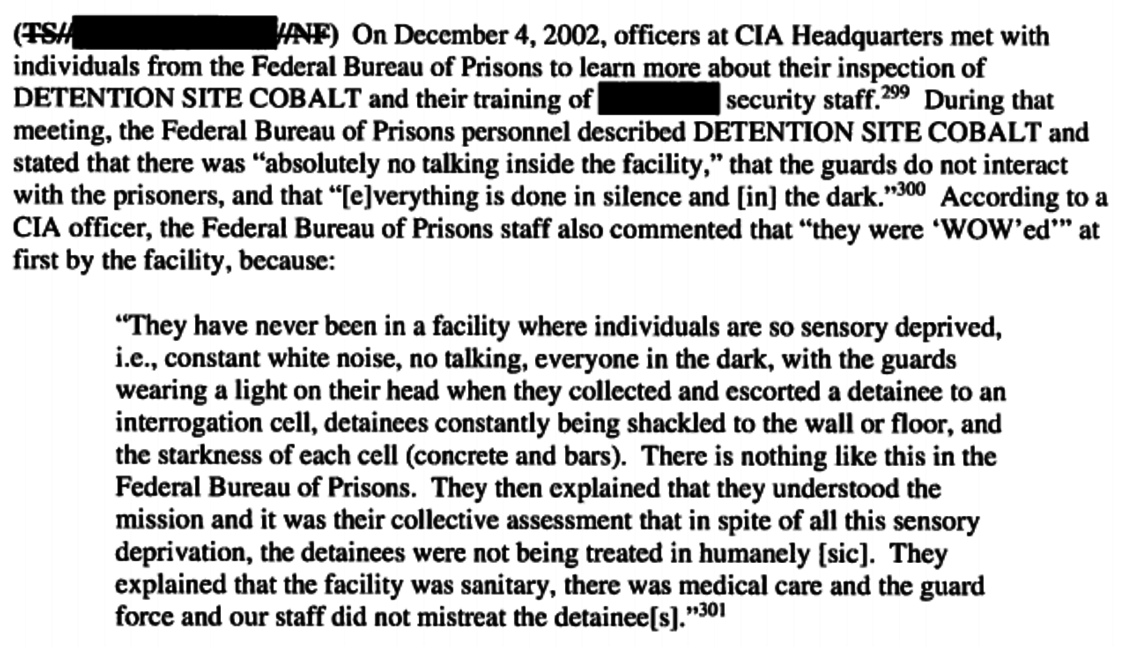 An excerpt from the Senate Intelligence Committee report on C.I.A. interrogation tactics.

“They have never been in a facility where individuals are so sensory deprived,” a CIA officer reported. “i.e., constant white noise, no talking, everyone in the dark, with the guards wearing a light on their head when they collected and escorted a detainee to an interrogation cell, detainees constantly being shackled to the wall or floor,and the starkness of each cell (concrete and bars). There is nothing like this in the Federal Bureau of Prisons.”

And they were naturally horrified. Right?

“They then explained that they understood the mission and it was their collective assessment that in spite of all this sensory deprivation, the detainees were not being treated in humanely [sic]. They explained that the facility was sanitary, there was medical care and the guard force and our staff did not mistreat the detainee[s].”

In a word, according to the CIA officer’s report, the visiting experts were “WOW’ed.”