By Christie Thompson and Andrew Cohen

Lennon Lacy, a black teenager who had no apparent reason to kill himself, was found dead on Aug. 29, the day before he was to begin another football season, hanging by two belts from a swing set in a field in Bladenboro, N.C. The police quickly labeled it a suicide, but Lacy’s family and civil rights advocates aren’t so sure. They describe the 17-year-old as a talented football player who had good relationships with his teachers and friends. They say the initial investigation was cursory: Lacy’s room was never searched, and the police had no explanation for why the shoes he was found wearing were not his, or even his size. 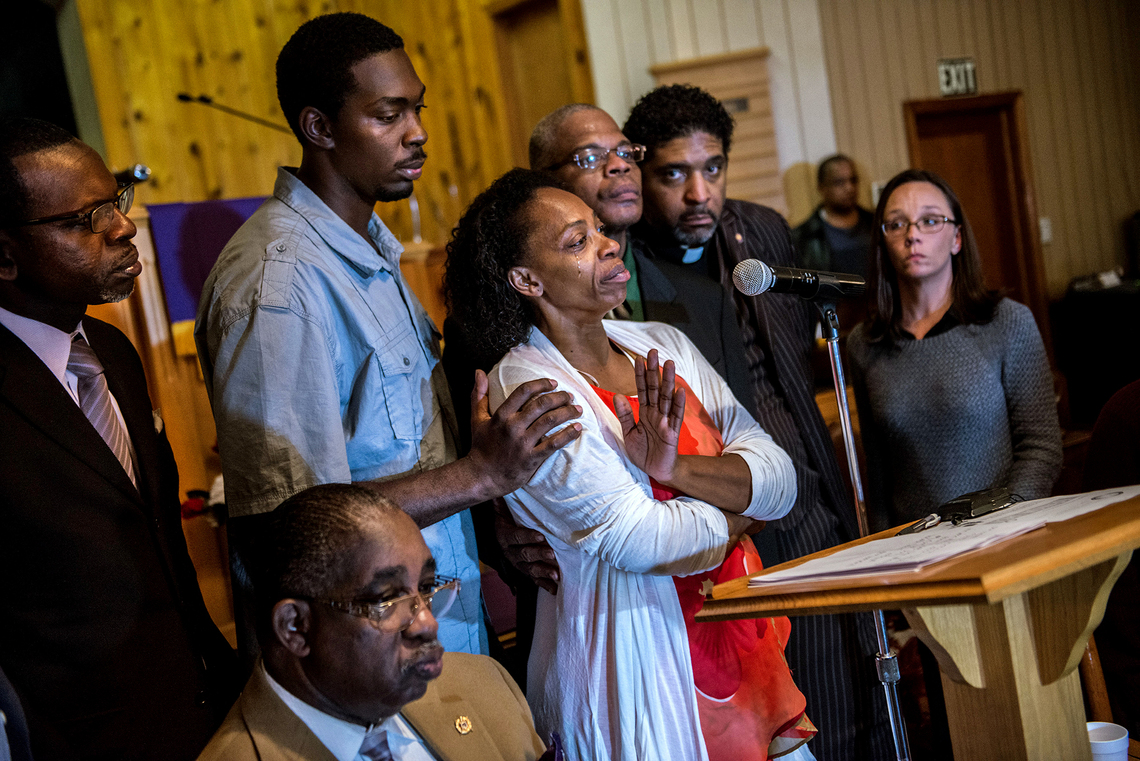 Leonard Lacy's mother, Claudia, met with the North Carolina conference of the NAACP at the First Baptist Church in Bladenboro, N.C. on December 1.

“We don’t know what happened to my son three months ago, and suicide is still possible,” Lacy’s mother, Claudia Lacy, wrote in an op-ed for The Guardian. “But there are so many unanswered questions that I can’t help but ask: Was he killed? Was my son lynched?”

The forensic work also has raised questions. A pathologist who examined the body at the request of the Lacy family said there was nothing found at the scene of his death that he could have stood on in order to hang himself. The local coroner who examined the body called it a suicide in part because the medical examiner labeled it as such, the Associated Press reported. And the medical examiner said it was a suicide in part because the coroner did. The sheriff evidently relied on both official reports but says a state investigation is ongoing.

As a result of these ambiguities, the FBI is now investigating the case. Was Lacy’s death racially motivated, as his mother suggests? Was he the first person to be “lynched” in the United States in decades? And how, exactly, does one even define the termtoday?

The word “lynching” came from a Virginia colonel, Charles Lynch, who in the late 18th century started holding extrajudicial “trials” on his front lawn where he would mete out punishments such as tying defendants to trees. During Reconstruction, white supremacists used the public hanging of African-Americans to terrorize the black community. The Tuskegee Institute, now Tuskegee University, which started tracking lynchings in 1892, has recorded 3,445 known lynchingsbetween 1882 and 1968. Though Congress failed to pass multiple proposals for a federal anti-lynching law (a lapse for which the Senate officially apologized in 2005), the practice had largely disappeared by the 1960s. Since then, the term has evolved to describe racially motivated killing of black Americans and has been invoked frequently in the ongoing protests over police shootings of unarmed black men.

Historians estimate that fewer than 1 percent of the people complicit in lynchings were ever prosecuted. In 2008, Congress passed the Emmett Till Unsolved Civil Rights Act to encourage the investigation of civil rights-era crimes, including lynchings. As of November 2012, officials had identified 112 cold cases and concluded their investigations in 92 of them. Those efforts have resulted in two convictions.

But racially motivated killings have not disappeared in recent decades. In 1981, after a black defendant was found not guilty in the shooting death of a white officer, two Klansman beat and murdered 19-year-old Michael Donald — who had no connection to the case — and hung his body from a tree. Local police initially suspected that Donald’s murder was drug related. The investigation, which involved the FBI and the Southern Poverty Law Center, took two years. Ultimately, one of Donald’s killers was sentenced to life in prison and the other was executed in 1997. Donald’s mother, who opposed the death penalty for her son’s murderer, was awarded $7 million in a wrongful death settlement.

In 1998, 49-year-old James Byrd Jr. was walking home from a party in Jasper, Texas. Byrd accepted a ride from three white men, two of whom were members of white supremacist groups. Byrd was killed by being dragged by his ankles from the back of a truck. Two of his killers were sentenced to death, and the third was sentenced to life in prison.

A string of hangings in the South in recent years raised concerns of foul play. In Kokomo, Miss., in 2000, the Justice Department agreed to investigate the death of 17-year-old Raynard Johnson, who was found hanging from a tree in his front yard. Community members suspected that he had been hanged for dating white women, but federal investigators ultimately ruled the “evidence [did] not suggest a criminal act.” Similar hangings in which no criminal intent was found occurred in Florida in 2003, Woodville, Miss., in 2004, and Greenwood, Miss. in 2010.

Alfred Wright, another black resident of Jasper, went missing in 2013. His body was found weeks later in a field. Family and community leaders feared that his death had been racially motivated. The autopsy, however, found that his death was the result of a drug overdose, and a drug dealer was indicted in August. A second pathology report, paid for by the family, also determined that his death was caused by an overdose but stipulated that “trauma cannot be definitively ruled out.” His family maintains that he was murdered and that law enforcement have covered up details surrounding his death.

Mark Potok of the Southern Poverty Law Center, who tracks hate crimes as the editor of SPLC’s Intelligence Report, cautions against assuming certain crimes are racially motivated. “We have seen over the last 10 years or so a good number of cases in which it was claimed that a young black man was killed and his death made to look like a suicide,” he said. “None of them has turned out to be a killing.”

The truth today about the Lacy case is murky, and may remain so for months. News reports suggest he may have been involved with an older white woman, who may have a drug problem, reports that the family does not deny. Even if this is true, of course, it does not explain why Lacy is dead, whether he died by his own hand, or whether he died because he was black. As the story develops, as the federal investigation proceeds, one thing is clear: Ever since the lynching of young Emmett Till in 1955, perhaps the most famous and significant lynching in American history, there have been sporadic episodes like this. Each time they occur, they raise important questions about race. Sometimes those questions elicit satisfying answers. And sometimes they don’t.

An earlier version of this story incorrectly identified the year of James Byrd Jr.'s death.