And defend their decision to play it safe.

A sergeant at Attica Correctional Facility involved in a savage beating of an inmate in the summer of 2011, brought home several batons after the episode, then sanded them down and refinished them, prosecutors said.

The sergeant, Sean Warner, 41, was one of three guards who pleaded guilty this week to misdemeanor charges stemming from the August, 2011 episode in which a 29-year-old inmate named George Williams was beaten so badly that doctors had to insert a plate and six pins in one of his legs.

Read our story about the beating of George Williams and the culture at Attica prison.

Had the case gone to trial, prosecutors said in an interview, they intended to present testimony regarding the batons from a source close to Warner: his wife, Maxine, from whom he has been separated since a few months after the episode.

While laying out new details of what they said was a powerful case against the guards, the prosecutors defended their agreement to a plea deal that cost the men their jobs but included no jail time. District Attorney Donald G. O'Geen noted the burden of convincing “not just any jury,” but a jury in Wyoming County, where prison is the largest local industry and corrections officers are viewed as defenders of public order.

In a telephone interview from her home in New Hampshire, where she now lives with the couple’s two children, Sergeant Warner’s wife, 37, confirmed that she expected to testify for the prosecution. "After the incident, Sean brought home five or six batons and refinished them," she said. 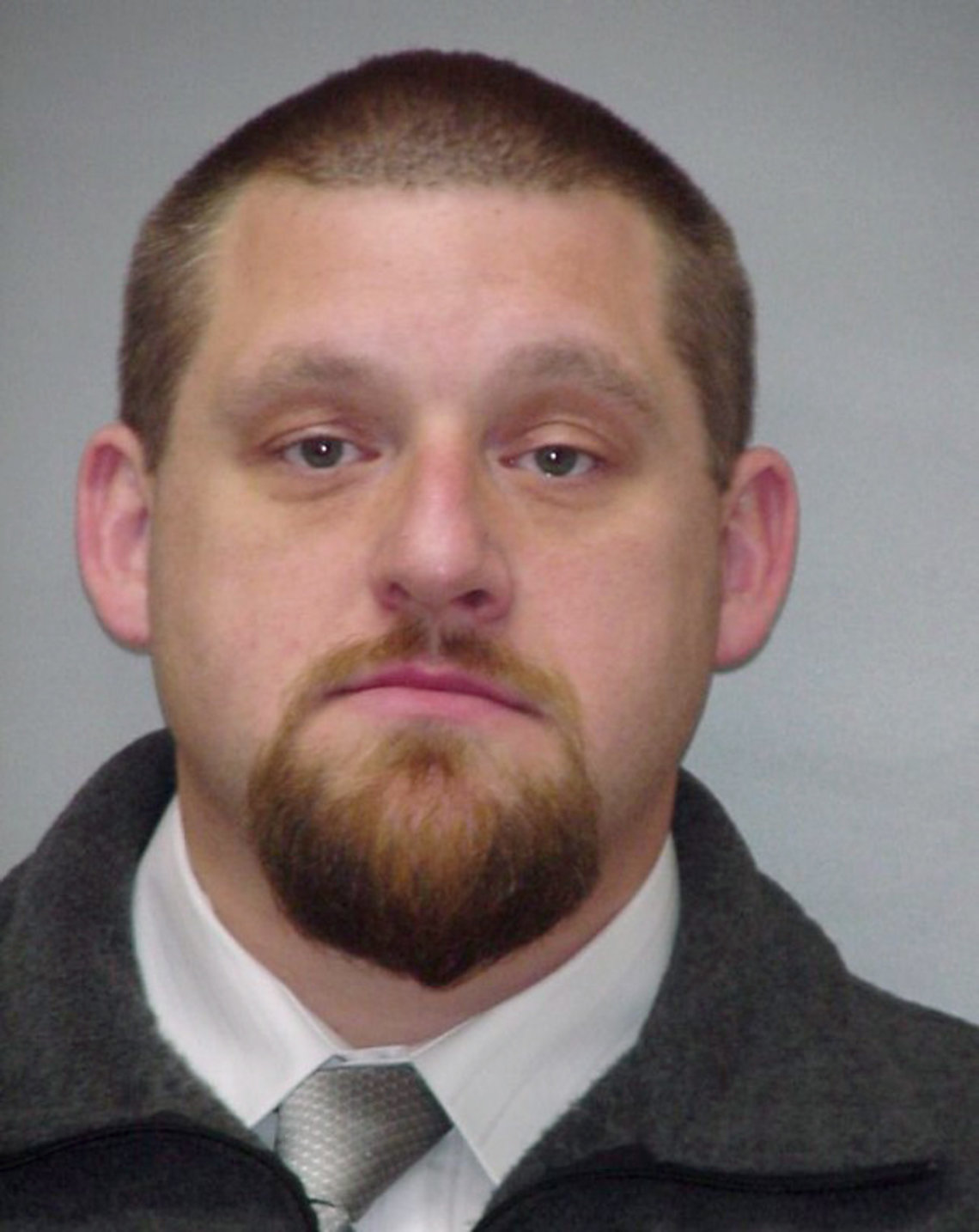 She added that her husband, who was later accused of filing false reports about the beating along with other charges, had expressed surprise that it had become the subject of an investigation.

"He said, 'I thought this paperwork was going to go through, no problem. This is the last incident I would expect would come back on me,’" Ms. Warner said. The comment, she said, was a reference to other violent confrontations with inmates at the prison her husband had mentioned. "There were many others," she said.

Prosecutors confirmed that three batons were later found by investigators at Sgt. Warner's home, and that Ms. Warner would have been called to the witness stand to tell a jury about them.

"She was potentially a big part of the case," said District Attorney O'Geen.

As part of his guilty plea on Monday, Sgt. Warner acknowledged removing a single baton from the prison without authorization, a violation of state rules. His attorney, Cheryl Meyers Buth, did not return messages. In comments to the Buffalo News after Monday's guilty pleas, Buth denied that her client had had to clean blood off of any baton.

Attorneys for the defendants would almost surely have tried to keep Ms. Warner off the stand, arguing that secrets between spouses are privileged. But the evidence rule is not absolute. Prosecutors said they would have sought an exception.

In a last-minute deal struck just before trial was to begin in the village of Warsaw, Sgt. Warner and officers Keith Swack, 40, and Matthew Rademacher, 32, agreed to quit their jobs at the maximum security prison in exchange for an agreement that they will have to serve no jail time. The men will be permanently barred from working for the state's corrections department, officials said, but the agreement does not affect their pensions, which they will receive when eligible.

The decision to accept pleas that carried no jail sentence in a case marked by exceptional brutality has sparked widespread criticism. Among those disturbed by the plea was former Republican State Senator John R. Dunne, who was among the outside observers present in the yard at Attica during the September 1971 riot there that led to 43 deaths. “He virtually gave them stay-out-of- jail free cards,” Dunne said. “It’s a terrible indictment of the system. If defenseless people can’t find justice in New York’s legal system, who can expect them to believe in it?”

But in a telephone interview, together with his chief assistant, Vincent Hemming, O'Geen defended his decision.

"I, too, wish we could have done more," he said. "But getting a plea was a monumental step." The charges, originally filed in December, 2011, included gang assault, conspiracy, and tampering with evidence. The felonies carried minimum sentences of five years if convicted.

The indictments represented the first time that New York state corrections officers have been criminally charged for a nonsexual assault of an inmate. After the charges were dismissed on technical grounds, O'Geen represented them to a second grand jury and obtained new indictments.

"We are breaking new ground here," said O'Geen. "Getting three guards — who have never, ever been charged before in the history of New York State — to stand in court and admit their guilt, is a huge step into making sure things like this don't happen again. Is it the perfect plea? Absolutely not. Does it mean that if they went to prison, I'd be upset? No. But the bottom line is, sometimes it's not perfect."

O'Geen said his office was prepared to present a case with strong evidence, but that he still faced major potential obstacles to a conviction. "It is a question of how the evidence is going to fall at a trial, what goes in, what doesn't go in." But in detailing what he would have presented to a jury if the case had gone forward, it appeared O'Geen held a strong hand.

In addition to the batons, he said, prosecutors would have also introduced evidence showing that laboratory tests on a weapon, a razor blade, that the guards claimed to have discovered hidden in Williams's underwear during a search showed that Williams' DNA was not present. Lawyers for the guards maintained that Williams prompted the fight by "resisting" efforts by the officers to search him.

Hemming said that they had also intended to show a jury a text message sent by Sgt. Warner to another guard involved in the beating as the investigation of the event was underway. "Stay strong, stick to the paperwork," the message read.

Prosecutors had planned to call as many as seven doctors and nurses regarding Williams' extensive injuries which included two broken legs, a broken shoulder and ribs, and a fracture of his eye socket. The medical workers would have included the nurse at Attica who insisted that Williams be sent to an outside hospital for treatment. The move interrupted what inmates at Attica say is the usual chain of events when beatings occur, with victims removed to solitary confinement where their injuries are largely ignored.

O'Geen said he was likely to have called as many as ten current and former inmates who witnessed some aspect of the beating that took place in a day room used for classes and meetings on C Block, one of the vast cell tiers in the 2,240-inmate prison. One inmate, he said, would testify that he was ordered to burn a sack of blood-soiled shirts handed to him by Officer Rademacher after the beating. Another inmate would have described the orders he received from other officers to quietly mop up an extensive blood spill in the day room.

All of the inmate witnesses, however, were expected to face tough grilling about their criminal pasts on cross examination by Ms. Buth and her co-counsels, Norman Effman, and Joel L. Daniels. "One of our main witnesses had been locked up in Louisiana; he had tried to escape. He was no angel," said O'Geen.

Williams, who was serving a two to four year sentence for robbing a pair of Manhattan jewelry stores, would also have faced intense questioning about his own criminal past by the defense attorneys.

"The question is: How is that going to play before a jury?" said O'Geen. "And not just any jury, but a jury in our county." Wyoming County, just east of Buffalo, is a largely rural, overwhelmingly white area where state prisons represent the largest employers, and where most people have either friends or family members working in the corrections industry. Most of the inmates, including George Williams, are African-American men with long rap sheets.

Had the men gone to trial and been acquitted, O'Geen said, the impact at Attica prison would have been severe. "If you lose and you get nothing, then the whole system becomes emboldened," he said. "The union, the staff; it's as if, ‘Oh yeah, we got away with it.’"

O'Geen said that Williams supported the decision to accept the guilty pleas, and was "overcome with emotion" when he heard the news. But in a brief exchange with a reporter on Monday, just after the pleas were announced, Willliams sounded much more equivocal. Edward Sivin, an attorney who is representing Williams in a civil rights lawsuit against the guards, clarified his client's feelings. "He is disappointed that they got what amounts to a slap on the wrist," said Sivin. "But he is gratified they can no longer be correction officers and that they can no longer to do other inmates what they did to him."

Ms. Warner said that even though she and her husband are estranged and are seeking a divorce, she had cooperated with prosecutors out of a sense of obligation. Her husband, she said, had changed over his fifteen years working in prisons."He was a very calm, laid back, easy going, fun person to be around," she said. "There is right and wrong, and I think he forgot that."