Match My Gift
Protesters march in Madison, Wisc. on May 12, after it was announced there would be no charges filed against Officer Matt Kenny in the shooting death of 19-year-old Tony Robinson. Scott Olson/Getty Images
Filed 7:02 p.m.
News

For 20 years, David C. Couper was the chief of police in Madison, Wisc., the liberal Big Ten university town that became a laboratory for his ideas about community policing and community engagement. During his tenure, from 1973 to 1993, Couper earned a reputation as a progressive reformer at a time when the War on Drugs and “tough on crime” were law enforcement mantras.

His “Madison Model” pushed a theory that "police officers are essentially social workers in blue." He dressed officers in blazers and shorts, sending them to march peacefully alongside anti-Vietnam war protesters at the University of Wisconsin. He also set up neighborhood beats in Madison’s high-crime pockets and deployed officers to walk the streets. And he taught rookie officers that it was acceptable to avoid confrontations with an armed suspect, rather than fire their guns in volatile exchanges.

Now at the age of 77 and an Episcopal priest, Couper remains deeply engaged — and concerned — with how law enforcement responds to new challenges. For Madison, at the moment, that means the death of Tony Robinson, a 19-year-old unarmed biracial man, who was killed by a white policeman's bullets on March 6.

Dane County District Attorney Ismael Ozanne (who is also biracial) announced Tuesday that his office would not seek criminal charges against the officer, Matthew Kenny. The officer was responding to several 911 reports that Robinson was acting erratically, jumping in front of cars and assaulting someone outside a restaurant. Toxicology tests found that Robinson had hallucinogenic mushrooms, marijuana, and Xanax in his system.

Kenny told his fellow officers that he had feared for his life during his brief encounter with Robinson and that the teenager, who was 6 feet 5 inches tall, had knocked him into wall. Kenney shot Robinson seven times in less than four seconds and remains on administrative leave, pending an internal department review.

The Robinson case comes after months of national soul-searching over the use of force by police officers. Police action that led to the deaths of African-Americans in Ferguson, Mo., Staten Island, Cleveland, North Charleston, S.C., and Baltimore provoked prolonged and sometimes violent demonstrations. In Madison, the city that gave rise to the Madison Model of de-escalation and less aggressive policing strategies, the same concerns are now front and center.

But the Madison Model (also known as the “Madison Method,”) has not, so far, faced any widespread criticism. In fact, as laid out in a Justice Department report from more than 20 years ago, it is still a go-to program relied on by law-enforcement consultants and community policing experts.

Couper calls his overall approach to law enforcement “democratic policing.” He bases his model on a variety of policies that he implemented during his two-decades as Madison’s chief. The most popular of these involves policing protests, where officers are instructed to refrain from using force during mass demonstrations and are told to protect people first, property second. 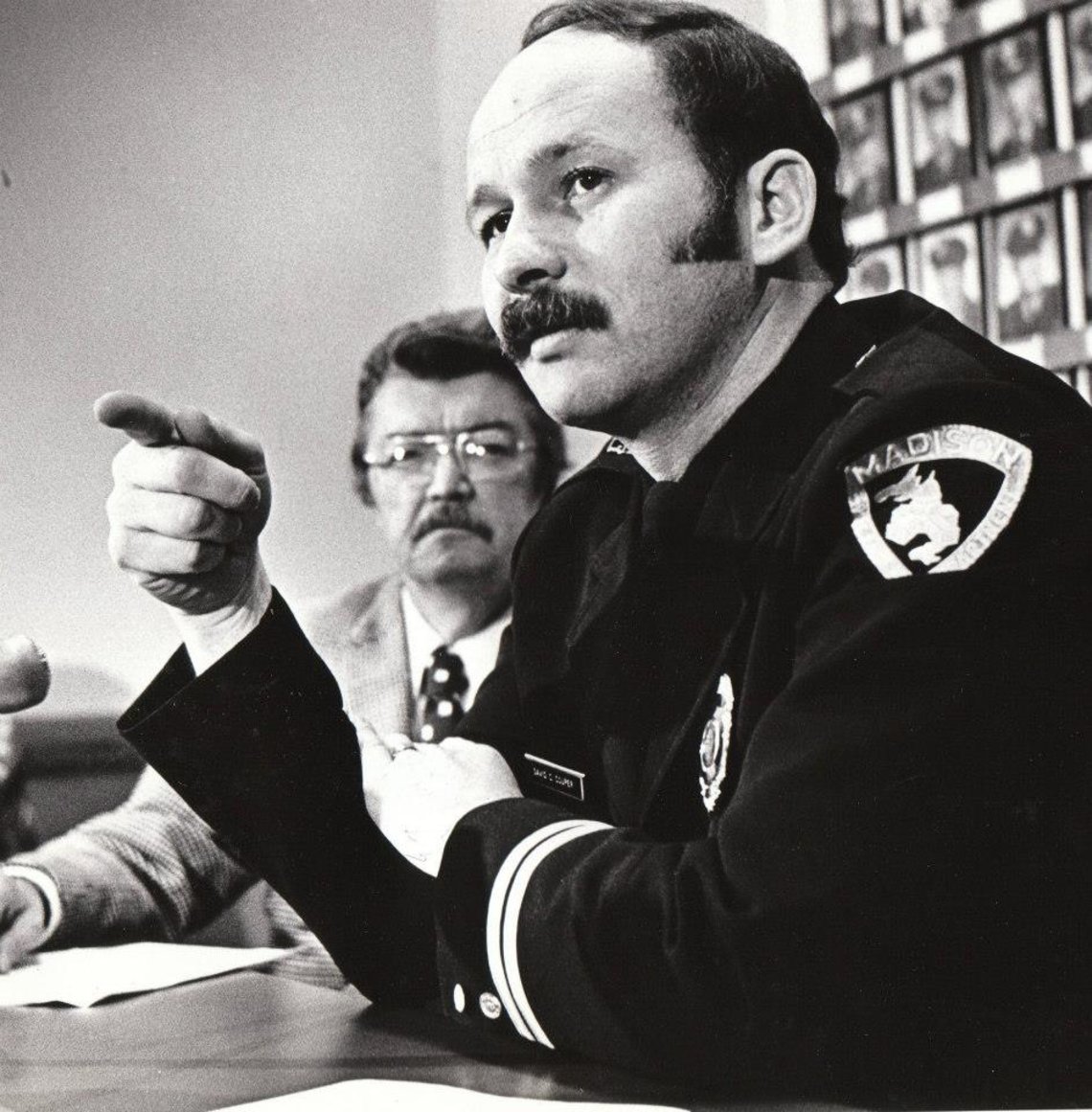 David C. Couper, right, in an undated photograph, during his tenure as chief of police.

Madison’s current chief, Michael C. Koval, reinforced the policy in a blog post this week, noting that the police department, although the target of the protesters’ frustration, still wanted to honor people's constitutional right to express themselves.

“They didn’t put officers in hard body armor. They kept a respectful style,” said Couper, who has marched with Robinson supporters.

Michael Masterson, a former police chief in Boise, Idaho, cited Madison’s protest-policing style as part of his marketing strategy in efforts to attract major conferences and other events to his city. Masterson, who once was once a Madison police commander and, until stepping down in January, led the Boise department for a decade, touted Madison’s lessons in a 2012 FBI bulletin about crowd control. Boise hosted the Special Olympics and the National Governors’ Conference on Masterson’s watch.

“Managing crowds is one of the most important tasks police perform,” Masterson wrote.

Madison’s law-enforcement legacy is not just its response to mass demonstrations and protests. There is also a namesake model for patrolling high-crime neighborhoods, explained by Couper as “quality policing.” Couper pushed quality policing during the 1980s and allowed beat officers to make decisions about how to solve minor crimes without approval from a supervisor. He also instructed officers to be more “sensitive” towards residents’ complaints and recruited more blacks and women to join the force.

“It was a big job. To take an all white male organization and have to diversify it. It was putting in a lifetime of work,” Couper said.

The common thread of Couper’s methods and models resides in teaching officers how to talk their way out of a potentially violent situation, or de-escalation. (Madison’s use of force policy, however, allows an officer, who believes he or she is in the midst of a life-threatening exchange, to kill someone without a verbal warning.)

Couper’s police communication theory has also made its way around to various other police departments over the years.

James Ginger, a veteran police monitor who oversaw the Justice Department’s court-ordered police reform plan in Pittsburgh and is currently heading similar efforts in Albuquerque, said he threaded Couper’s de-escalation tactics into the changes that he oversaw in Pittsburgh. Those reforms mandated that police recruits learn how to talk to obstinate people, such as those who demand that an officer show identification, instead of resorting to violence.

“Dave Couper was the essential ‘calm folks down, and let’s talk about the situation’ guy,” Ginger said in an interview.

Noble Wray, another former Madison chief, who was the second African-American to head the department, is now a Justice Department expert on bias in policing and travels the country — including St. Louis and Ferguson — instructing officers on how to avoid unfairly stereotyping residents based on skin color or where they live.

“You have to communicate on a human level. You make that human connection. Respect and dignity is the foundation of being able to de-escalate,” Wray said.

But there are those who see flaws with the Madison Model. Matthew Braunginn, a spokesman for the Madison-based advocacy group Young Gifted and Black Coalition, described the policing strategy as “soft oppression.”

“It was developed as a way to quell uprising, it wasn’t some morality choice,” Braunginn wrote in a text. Young Gifted and Black, inspired by the demonstrations in Ferguson, has organized a series of marches in Madison since Robinson’s death. “It’s a reform that’s used to pacify and not address the structural issues at play,” Braunginn wrote.

The “structural issues” Braunginn referenced were highlighted in a 2013 report on racial disparity in Dane County — where Madison is located, 80 miles west of Milwaukee. The college town is home to around a half-million residents, and blacks make up six percent of the population. Statistical measures, based on race, show a clear divide.

The Madison Model does not directly address deep-seated socio-economic issues. But inherent in Couper’s original outline for policing is the need to be aware of an individual’s civil rights.

“The preservation of life, that’s our job,’’ Couper said. “And that’s the matter of leadership. That’s a matter of training. It’s day-to-day policing. We are the lifesavers. That has to be integrated in the culture.”