The ‘South Texas Family Residential Center’ Is No Haven

The Dilley “South Texas Family Residential Center” tries to mask its nature with summer-camp-inspired euphemisms. When I visited Dilley last week along with other nonprofit representatives, we were told that the “residents” live in “neighborhoods” with names like “Yellow Frog” and “Red Parrot,” which come with matching cartoon animal labels, and are watched over by “residential supervisors.”

But Dilley is no summer camp.

Opened in December, it is a 50-acre secure detention facility estimated to cost $260 million per year and is owned and operated by the Corrections Corporation of America, the nation’s biggest for-profit prison company. Dilley’s purpose is to detain families who fled violence in Central America, came to the United States seeking protection, and are waiting for the courts to decide their claims for immigration relief. Still under construction, the facility currently detains nearly 800 people and will have the ability to hold 2,400 by the time construction is finished. On completion, Dilley will be the single largest immigration detention facility in the nation, making Central American toddlers and mothers the new face of mass detention.

A high fence and security cameras encircle the camp, preventing the “residents” from escaping. Visitors go through metal detectors and entry procedures indistinguishable from those in a regular prison. Both the children and their mothers know the “residential supervisors” are guards — and are reminded of this fact by reporting to be counted three times a day and enduring frequent bed checks at night. 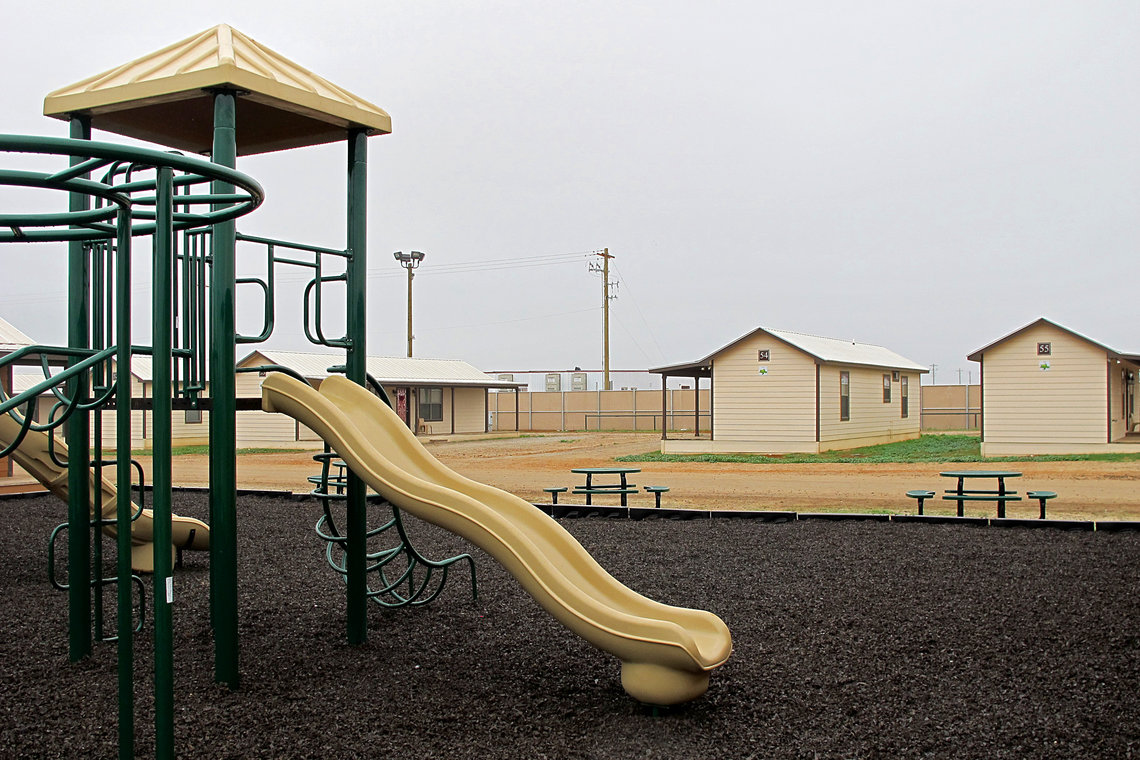 The temporary housing that members of Congress and the media saw in an earlier visit has been replaced with barracks-like structures that offer no privacy — a single room can hold as many as 12 people from unrelated families. Inside the treeless camp, the thin, red soil turns into throat-grinding dust when dry, and after rainstorms, it becomes sticky, shoe-destroying mud.

Each morning at 5:30 a.m., guards wake the children up with shouting and lights. For a place with so many young children, there are no toilets or showers inside the housing units — only communal restrooms accessible through hallways exposed to the elements. On one occasion, a young girl was forced to pee her pants during a detainee count because a guard refused to let her leave to use the toilet. It is not surprising that many children start each day with tears.

Immigration officials claim that this is a “safe and humane” way to detain children and their mothers. But what I saw at Dilley was disturbingly familiar to me.

During World War II, the U.S. government arrested my family because of their Japanese ancestry and locked them in prison camps that were euphemistically called “relocation centers.” Historians generally agree that the wartime incarceration of Japanese Americans was wholly unjustified — a product of hysteria and racist, unsubstantiated beliefs that they were potential spies and saboteurs. In a historical irony, Japanese Americans were actually drafted from the camps and fought in a racially segregated U.S. Army unit.

I have previously visited the sites of Manzanar, Tule Lake, and other World War II incarceration camps. More than anything else, Dilley feels like an updated version of these places. And modern officials’ efforts to put a happy sheen on family detention echo the World War II propaganda films created to justify the incarceration of Japanese Americans, which caused lasting trauma for Japanese-American families.

By rendering parents as helpless as their children, the camps both undermined family structures and created a constant undercurrent of anxiety. In the claustrophobia and lack of privacy of the barracks, nobody could escape from the arguments and tears of other families. Even after they left the camps, children struggled to recover from early experiences of living as child prisoners.

Today, immigration authorities under President Obama’s direction are needlessly inflicting the same trauma on families that arrived in the United States seeking protection.

Family detention facilities on the scale of Dilley exist only because the Obama administration made a dramatic about-face last year in its treatment of migrant families. Between 2010 and June 2014, Immigration and Customs Enforcement generally did not detain families seeking asylum protection in the U.S. However, starting in the summer of 2014, ICE responded to increased numbers of Central American migrants by taking the position that Central American families should either be denied release or released only if they could post enormously high bonds.

The day after I visited Dilley, ICE announced that it would take steps to “enhance” conditions of confinement inside its family detention facilities because “the well-being of detained families, particularly of children, is of paramount importance to ICE.” But these measures do not address the underlying inhumanity of family detention. If the administration is serious about protecting children and trauma survivors, then ICE must release these families to the community — under individually determined terms of release or supervision — while their immigration cases make their way through the courts.

ICE’s misguided effort to build child-friendly prison camps repeats the inhumanity that the U.S. government inflicted on Japanese-American families during World War II. If Obama administration officials implementing family detention ignore the lessons of the past, they will assure their own ignoble place in history.

Carl Takei is a staff attorney with the ACLU’s National Prison Project. He is the coauthor with the ACLU of Texas of the report on federal criminal alien requirement prisons in Texas, Warehoused and Forgotten: Immigrants Trapped in Our Shadow Private Prison System.