Can German Prisons Teach America how to Handle Its Most Violent Criminals?

How Germany does prison, day three. 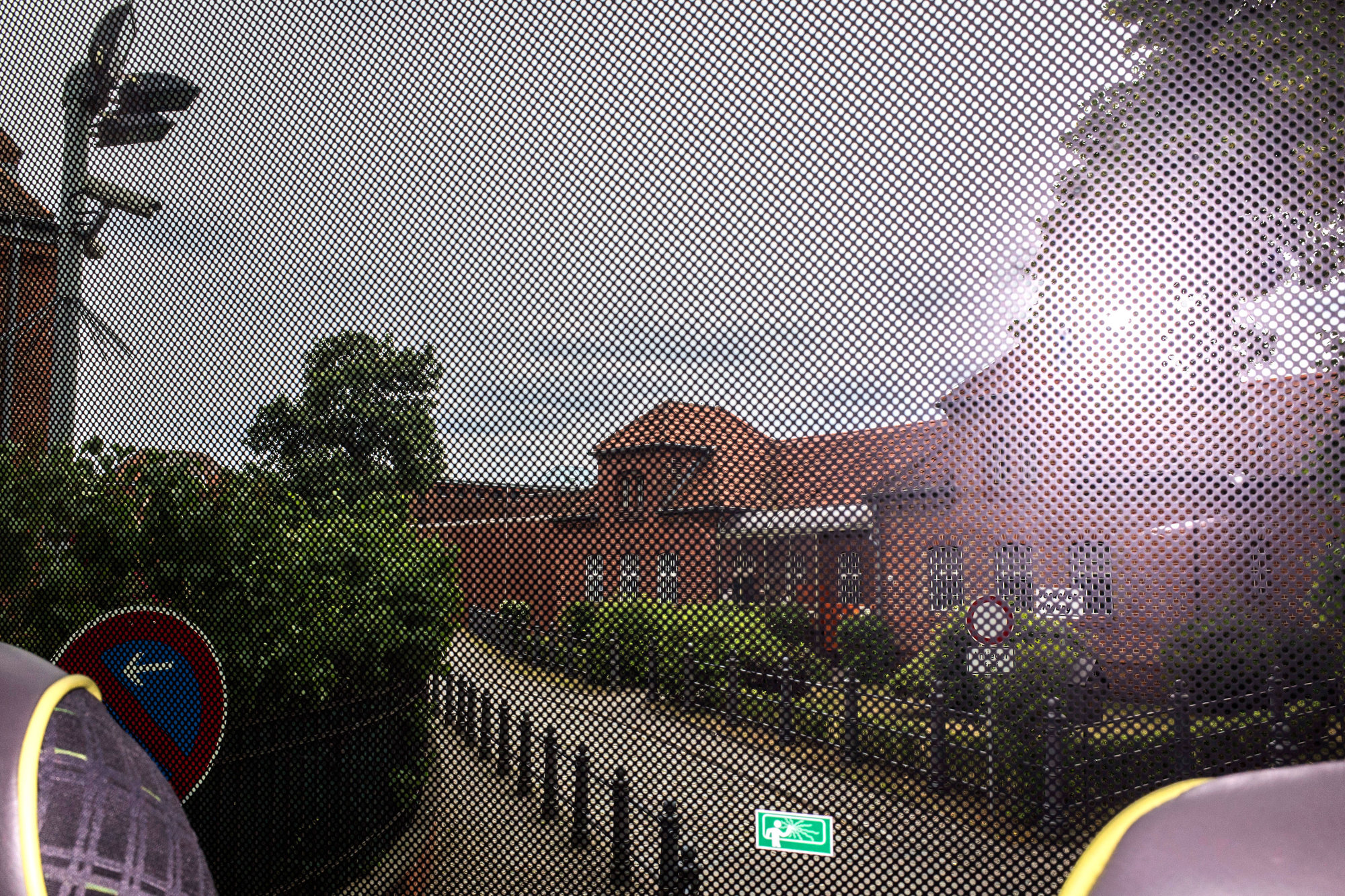 The view outside Tegel-Prison from the bus carrying the delegation. JULIAN RÖDER
By Maurice Chammah

Chris, who asked me not to use his last name but encouraged me to use his nickname, “Bear,” has been incarcerated in German prisons for 31 years. He would not describe his crime, but it must have been very violent: Even defendants who get a “life sentence” for murder in Germany are released after 15 years if staff no longer deem them dangerous. Chris, on the other hand, is in a program known as “preventative detention.” He may die in prison, or he may go home in less than a year — depending on whether he can prove he won’t be dangerous if released.

In the 1980s, American state legislatures began approving programs to hold sex offenders after their sentences were completed. Generally called “civil commitment” for those criminals deemed to be “sexually violent predators,” these programs theoretically allow offenders to be released after they’re treated and judged to no longer represent a threat to society. But in practice, those who get wrapped up in them are almost never actually let go.

In Germany, criminals kept after their sentence, generally for rape or murder, do get released. Every year, two or three of the roughly 40 inmates in the preventative detention unit at Tegel Prison, in Berlin — which I visited on Tuesday with a group of corrections officials, prosecutors, researchers, and activists from the United States — are let go. There are roughly 500 prisoners in the program across Germany, though the numbers are on the decline. Until 2011, their ranks included men who had committed theft and fraud, but now are restricted to violent crimes (primarily rape and murder), according to Kerstin Becker, the head of the preventative detention unit at Tegel Prison.

For the American visitors, the preventative detention unit at Tegel offered a radically different way to approach those we in America might call the “worst of the worst” — criminals who, for all the talk of rehabilitation, remain terrifying, and even repugnant.

All of the prisoners in German preventative detention are required to participate in individualized therapy programs. Every year, a group of psychologists and officials decide whether the prisoner can be released safely. They also decide regularly whether the prisoner can visit family on the outside, a dynamic that is practically impossible to imagine in the U.S. Chris is able to go — accompanied by officers — to visit his daughter, who is 18 and was conceived while he was incarcerated, as well as his baby granddaughter.

Chris was an affable tour guide, though our conversation was shrouded in some awkward mysteries. I did not have an opportunity to review his file to find out why he is considered dangerous, and he declined to speak about his crime (“I don’t want to be defined by my past,” he said). I saw his room, decked out with teddy bears for when his granddaughter visits, vaguely gothic art on the walls, and a massive window looking out onto a grove of trees. Upstairs, I saw a large exercise room, a music room full of electric guitars and drums, and a workshop where Chris fixes bicycles. He feeds and cares for the two cats who slink around the premises—he named them Bonnie and Clyde — and they run over when he whistles.

After a few minutes in this sunny, spacious building, it became clear that conditions for men in preventative detention are better than those for regular German prisoners. Unlike inmates who committed murder and rape and are often confined to their cells, these men are able to roam the grounds of their unit freely from six in the morning until 9:30 at night. They even have a bright blue basketball court. “We have to give them more freedom,” said Becker, the program’s head. They are only being held to protect the public, she added, and not to punish them.

“The house is good, but the system is not okay,” Chris told me. After several days of cheery inmates and optimistic officials, this was the first time I heard a prisoner say something critical about a German prison. The resentment at being held indefinitely was apparent: at one point, I saw a prisoner, in full view of the American visitors, tell one of the guards, “Shame on you!” 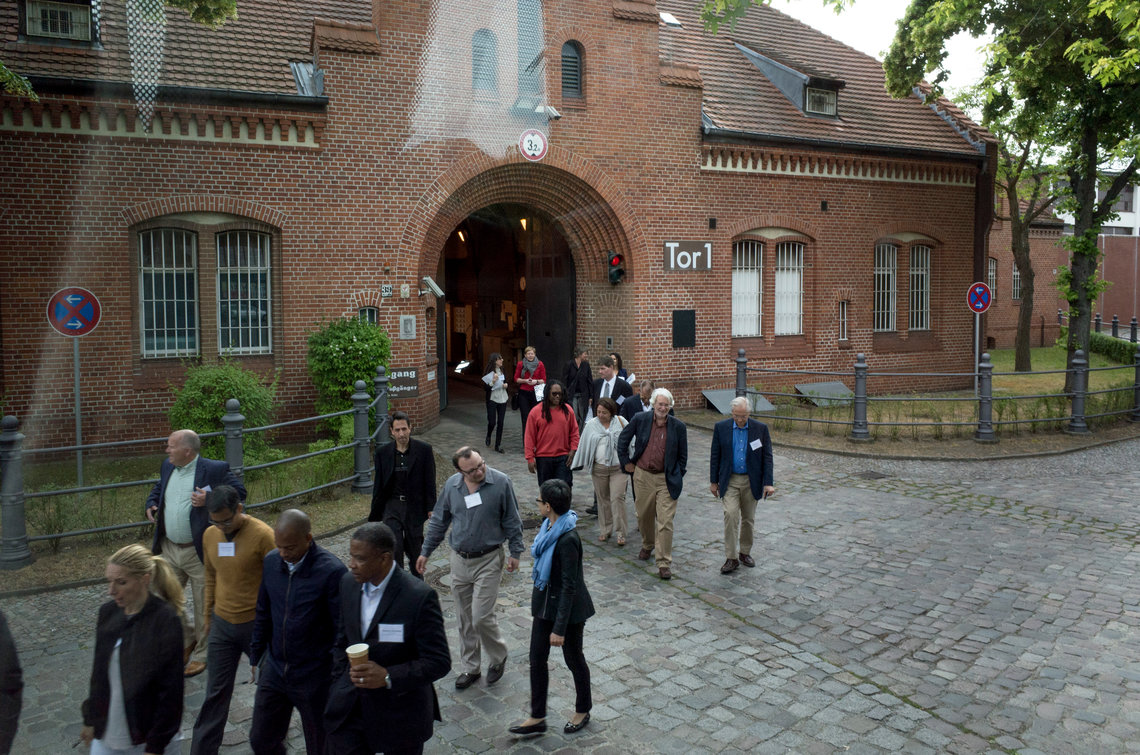 The Delegation of the International Sentencing and Corrections Exchange leaves Tegel-Prison in Berlin on Tuesday.

Still, given the emphasis on rehabilitation in the rest of the system, it appeared as though everyone here is here for good reason.

I asked Chris if he considered preventative detention fundamentally unfair.

“Sometimes, because they need to give me an end-date [for my sentence],” he said. “I try to prove I won’t be violent.” He threw up his hands, as if to suggest that despite all the talk of rehabilitation, he has no idea, really, how to get out. “What can I say?”

As American officials on the tour learned about the preventative detention program, one question reflected a theme that has continued to crop up throughout the week: What does the public make of this? Gregg Marcantel, the corrections secretary of New Mexico, asked Becker, the head of the unit, whether anyone had ever been released and then committed a violent offense. She replied that this has not happened yet.

But what if it did? The Americans — thinking perhaps of the Willie Horton (who was convicted of assault and rape after fleeing a weekend furlough) and other scandals where leniency apparently led to tragedy — agreed that such a program would quickly be shut down in the U.S. But Becker said their approach is protected by the country’s high constitutional court and insulated from public opinion. “The media is quite nice to us,” she added.

Although it was difficult to imagine the American public supporting preventative detention, it’s a concept the U.S. has embraced in theory through its own civil commitment programs. I heard murmurs from the American officials that a crucial ingredient in the rehabilitation of prisoners is hope — and seeing hope bestowed, even on the worst of the worst, is a lesson one can imagine them introducing, little by little, into our own system.