Fact-Checking Season 3 of Orange Is the New Black

A former CO — and first-time OITNB-watcher — weighs in.

Compared with what I used to do for a living, the assignment from my editors at The Marshall Project was simple: Binge-watch the third season of Orange Is the New Black and tell us what you think. They had two reasons for choosing me. One, I had never seen the show and had no preconceived notions about characters or plot. And two, before I was a reporter, I was a corrections officer.

For about three years, I worked for the Arizona Department of Corrections at ASPC-Lewis, a men's prison outside Phoenix. But because of staffing shortages, I occasionally filled in at the women's prison, ASPC-Perryville.

To say there are differences between a women’s and men’s prison would be an understatement. Unlike the women, the men strictly segregate themselves by race. Gangs are everywhere, tension is ever-present, and explosive violence often follows prolonged periods of boredom and monotony.

As a male CO working in a women’s unit, you not only have to watch for violence, but you have to worry about being set up — accused of doing or saying something you didn’t. The older guys in the department referred to Perryville as a “trick bag,” and for good reason.

There were occasional themes and moments in Orange Is the New Black that struck me as authentic, but for the most part it takes broad creative liberty in portraying the culture of inmates and staff in a correctional facility. After all, its popularity doesn’t depend on strict adherence to the reality of prison life.

Also, it goes without saying, but: This post is filled with spoilers.

Episode 1: Officers Maxwell and Bell take inmate Doggett shopping at a local store in anticipation of a Mother’s Day picnic for the inmates and their children at the prison. They browse the unnamed store for various party supplies. 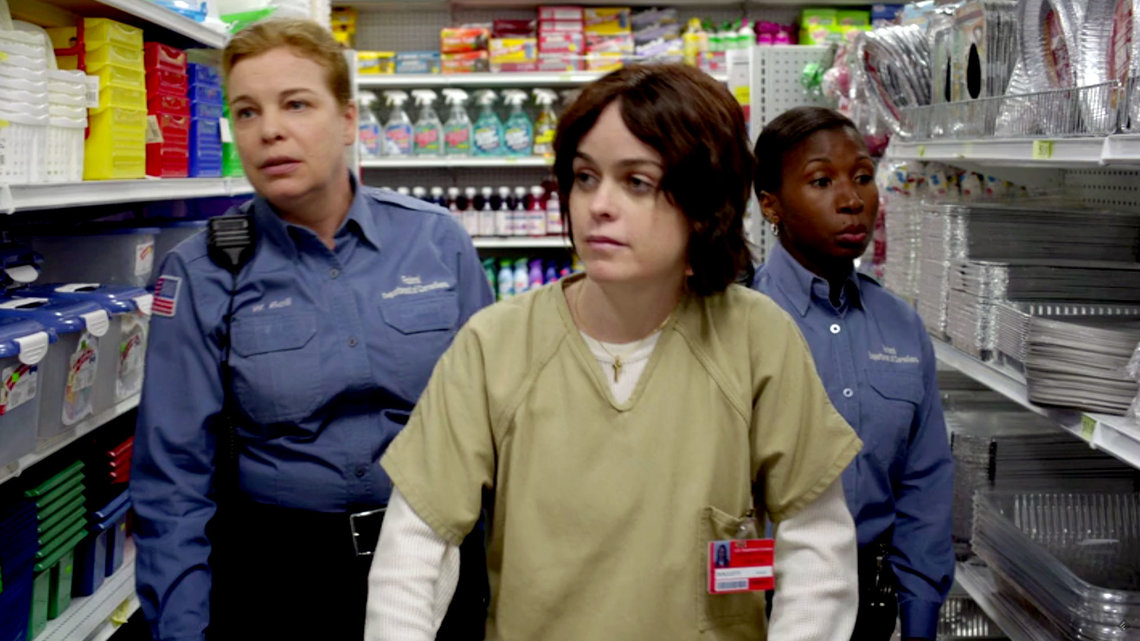 Whenever an inmate is escorted off prison property, it’s all business. Because of the potential for an incident, taking an inmate shopping at a store where the public shops would be a prison administrator’s worst nightmare. There are a multitude of scenarios where this could go bad, including the inmate’s shoplifting or stealing, trying to escape, hurting or scaring a child, or slipping on a wet floor and filing a lawsuit, among other things. Obviously, the show is set in the federal system at a different custody level than the one I worked in, but I can’t imagine this ever being authorized.

I worked with two officers who were suspended because they went through a McDonald’s drive-through while they were escorting an inmate back to the prison from the hospital. They never left the vehicle and the inmate was shackled in the back seat, but it was an unauthorized stop. That’s how seriously it’s taken.

Episode 1: During the Mother’s Day event, Doggett makes a small “graveyard” out of wooden sticks for all the babies she aborted. 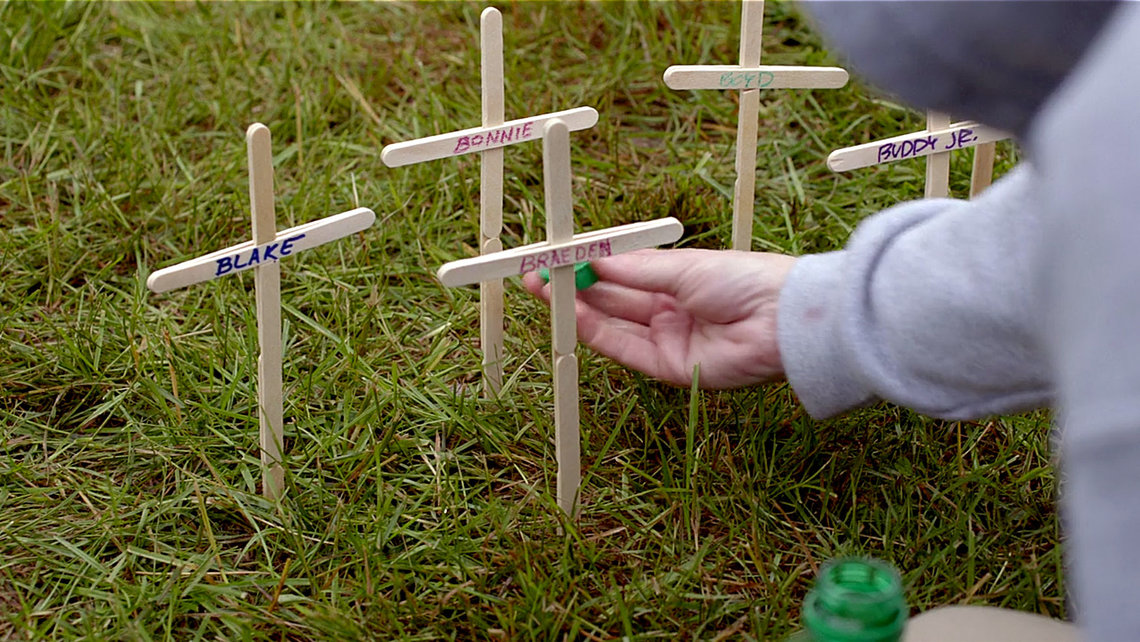 In prison, a homemade weapon is known as a “shank,” and a larger, deadlier shank is known as a “bonecrusher.” They are the type of weapons that can kill you with one thrust. You could make several bonecrushers out of those crosses. Even on a lower-security women’s unit, where violence is not likely, potential weapons like those wooden pieces would probably not be allowed, especially when there doesn’t appear to be any maintenance-related use for them.

Episode 2: Bennett — in full uniform, in broad daylight — gets down on one knee and proposes to Daya, who is carrying his child. 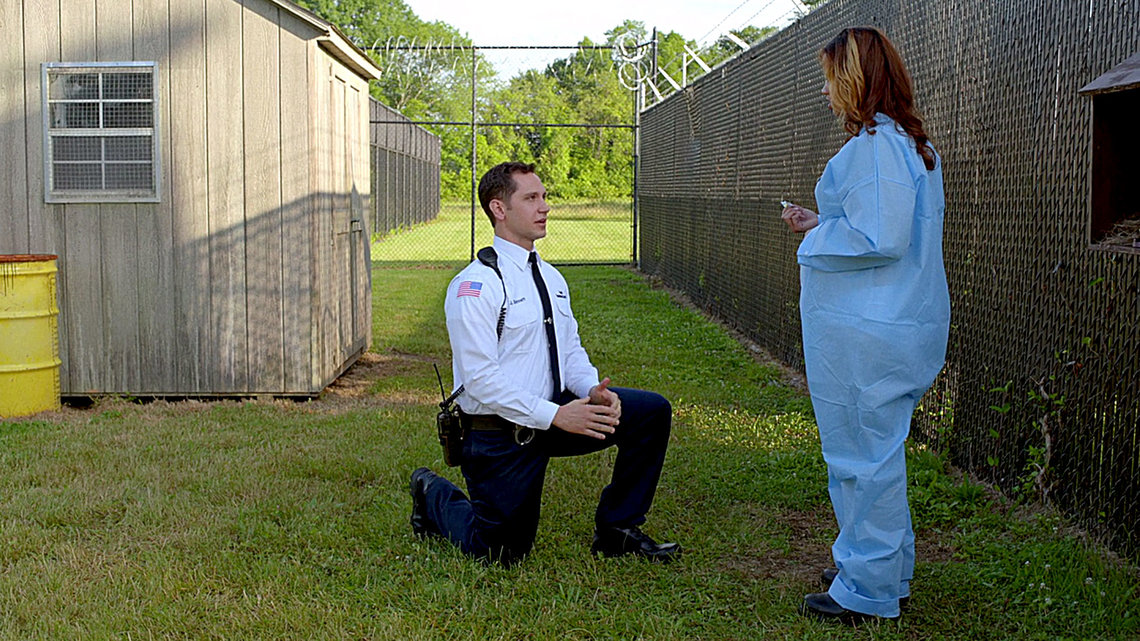 Because of the custodial nature of the inmate-staff relationship, by law there is no such thing as consensual sex between the two. Cadets are told this the first day at the academy and every day after. A CO who has sexual contact with an inmate, whether the inmate is willing or not, is committing sexual assault, so Bennett openly proposing to Daya is ridiculous.

Gossip in prison is worse than in high school. Inmates hear and see everything. They listen to CO’s talk; they watch to see who interacts with whom, and they use what they hear to probe for weakness in staff. They know who’s having a baby, whose wife is leaving him, whose kid is sick, who just broke up with his girlfriend. They even know which COs don’t get along, which COs do, and what posts they like to work. And they use that information to try to play staff members against one another.

If this scenario happened in a real prison, every inmate in that unit would be writing to the governor, the corrections commissioner, their lawyer, the president, literally anyone that they could think to tell in exchange for a reduced sentence.

Additionally, Bennett would be in jeopardy of being exposed by his co-workers. A compromised staff member puts everyone in danger. The thinking from a staff perspective is that if he’ll have sex with an inmate — and is crazy enough to propose to her publicly — he’ll think nothing of smuggling in drugs, weapons, or anything else she wants. Someone he works with would “drop paper” (write an incident report, prompting an investigation) on the relationship and he would be gone.

Episode 2: CO Maxwell issues an order to Alex in front of Chapman and another inmate. Alex blatantly disobeys and indirectly refers to Maxwell as a cockroach. After Maxwell informs Alex that she’s going to segregation as punishment, Chapman intervenes, talking Maxwell out of taking action. 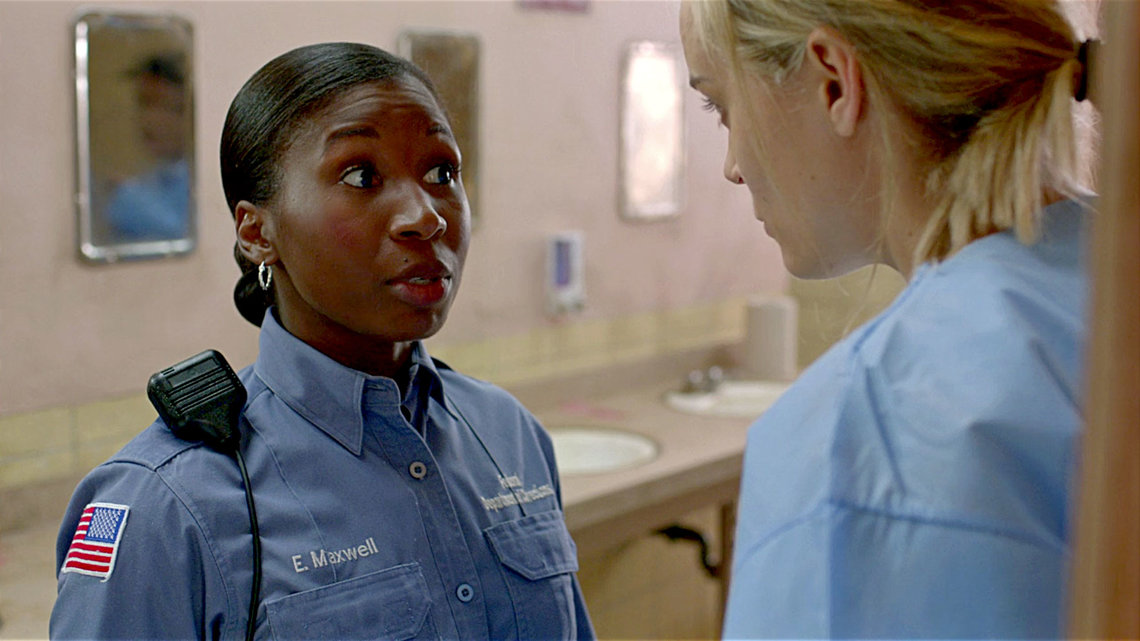 In this situation, CO Maxwell has no choice, if she caves, she looks weak and will get constantly tested, making her job very difficult to do. In prison, looking weak can also lead to “getting checked.” This happens to new COs, but it can happen to veterans as well. A group of inmates will wait until an officer is alone and try to intimidate him, make him break, make him show fear. 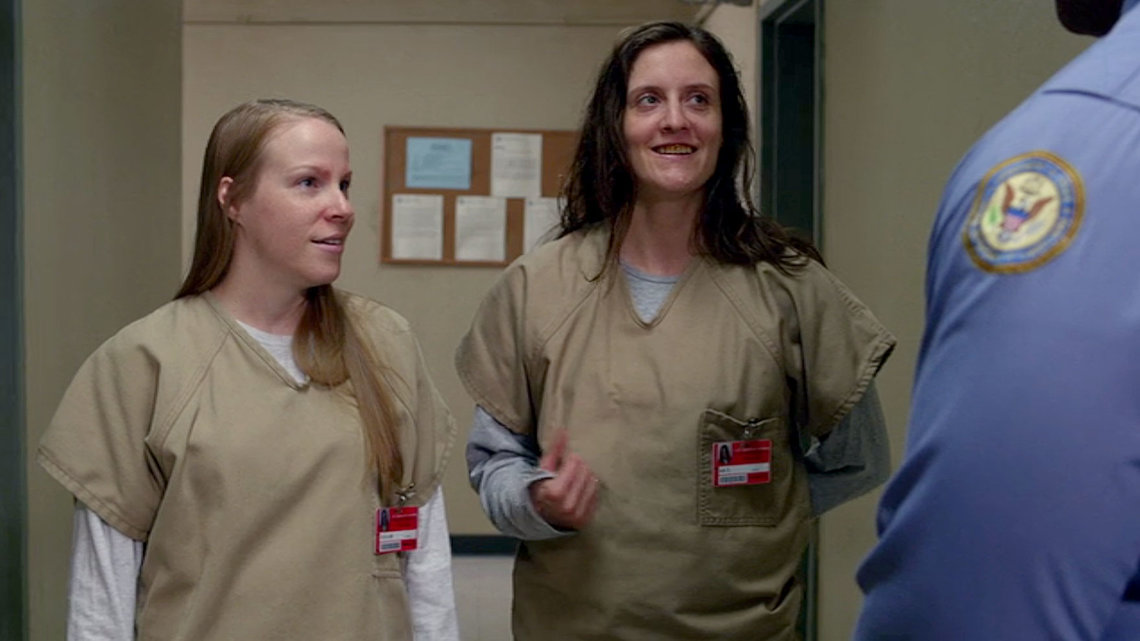 Episode 5: With Bennett and Daya engaged and planning a life together, CO Healy and inmate “Red” Reznikov continue their flirting, including Red seductively buttoning Healy’s uniform. 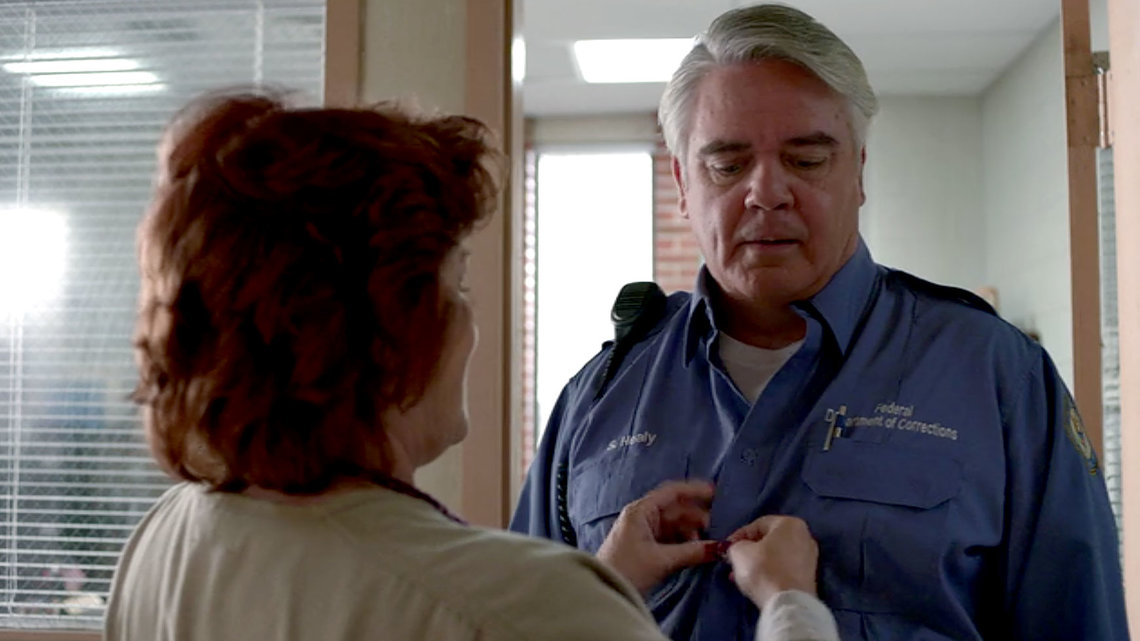 It appears that virtually every male staff member in this place is treating it like his own personal dating site. I can’t stress enough how quickly this type of behavior would become public knowledge, leading to an investigation.

Episode 6: Lorna gets an idea to make money and begins meeting with multiple pen pals to get them to put money in her commissary account. 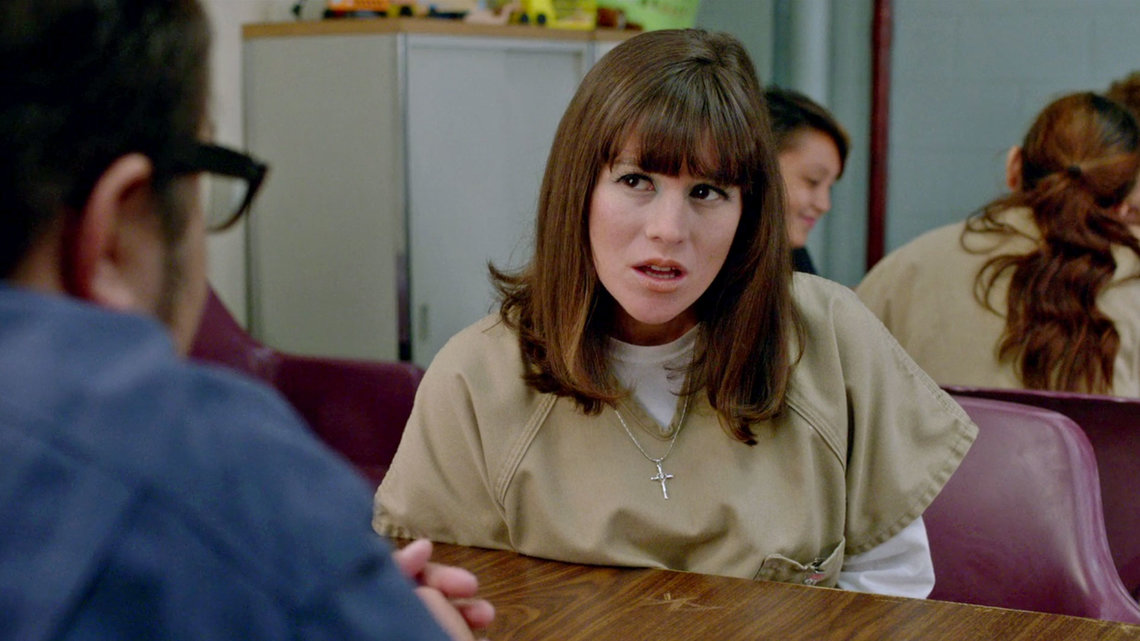 There are inmates who do this, but it takes a long time to get someone on a visitation list. She wouldn’t be able to tell a bunch of random men she’s been corresponding with to show up at the prison for a visit. The administration is going to want to know what the nature of their relationship is, how long the man has known her, etc. They’ll also typically do a background check on the man to see whether he has ever been incarcerated or if he is on any other inmate visiting lists.

Episode 10: CO Ford speaks to CO Luschek about the officers no longer being in a union. Luschek explains that he’s not worried, because he’s recently come into unexpected money from government drilling on his property. Ford, not buying the story, explains that his cousin recently bought heroin from Luschek’s brother-in-law. “You wouldn’t know anything about that, would you?” Ford asks with a smirk, knowing that Luschek is involved. 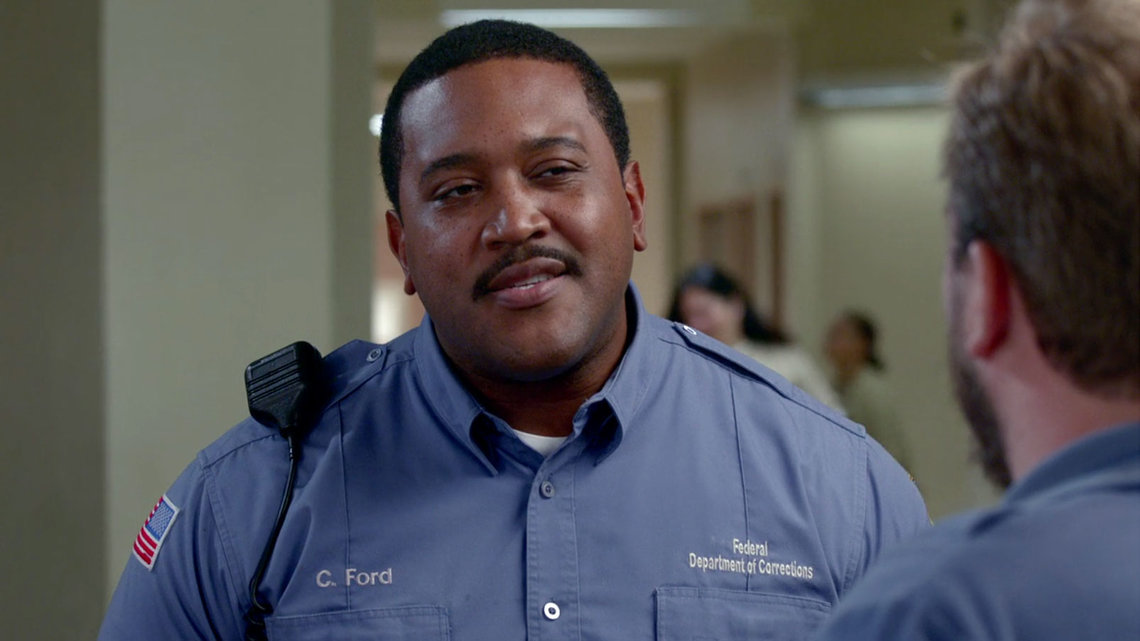 If a CO is suspected of being involved in trafficking drugs, he would be ostracized, at the very least, by most of his fellow officers. No one would want to work with him or speak to him, and he would quickly come under investigation.

The major causes of violence inside prisons are drugs and gambling debts, so if an officer is trafficking in drugs, he’s putting everyone’s safety at risk because of greed. It would not be met as casually as in this scene.

Episode 10: CO Coates, the former donut salesman who is hired by the prison when it goes private, rapes Doggett outside the receiving dock at the prison. 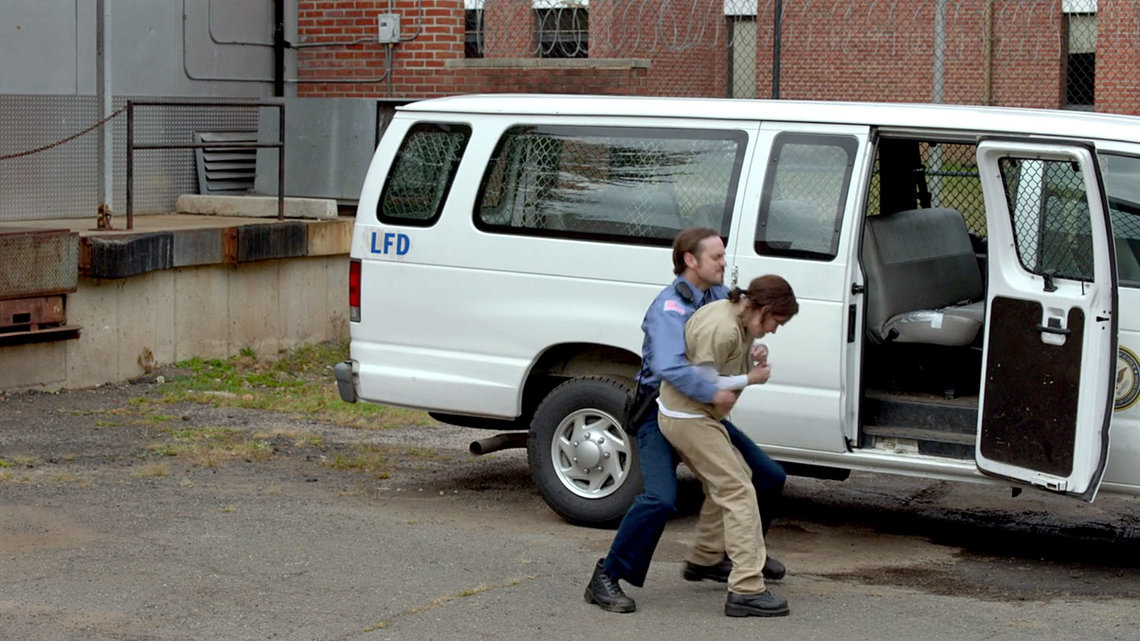 Coates forced himself on Doggett earlier, when they were off prison grounds, but now decides to grab her, throw her in the back of the van, and rape her.

Modern prisons are crowded places, constantly buzzing with movement and activity, especially lower-security units. There are surveillance cameras everywhere. If an officer were to physically attack an inmate like this, someone would have seen it or it would have been captured on camera. And no officer I ever came in contact with would have covered for a man like this. The hatred of rapists and sex offenders in prison is not limited to inmates. Staff members will cover for each other for certain things, but for something like this, no way.

And something the show gets really right:

Episode 4: CO Donaldson responds to a confrontation between inmates Warren and Washington. He turns to Jefferson, another inmate and maternal figure to the women, and says, “Take care of your girl,” or he’ll take Warren to the solitary. Jefferson orders both inmates to sit, and the confrontation is over. 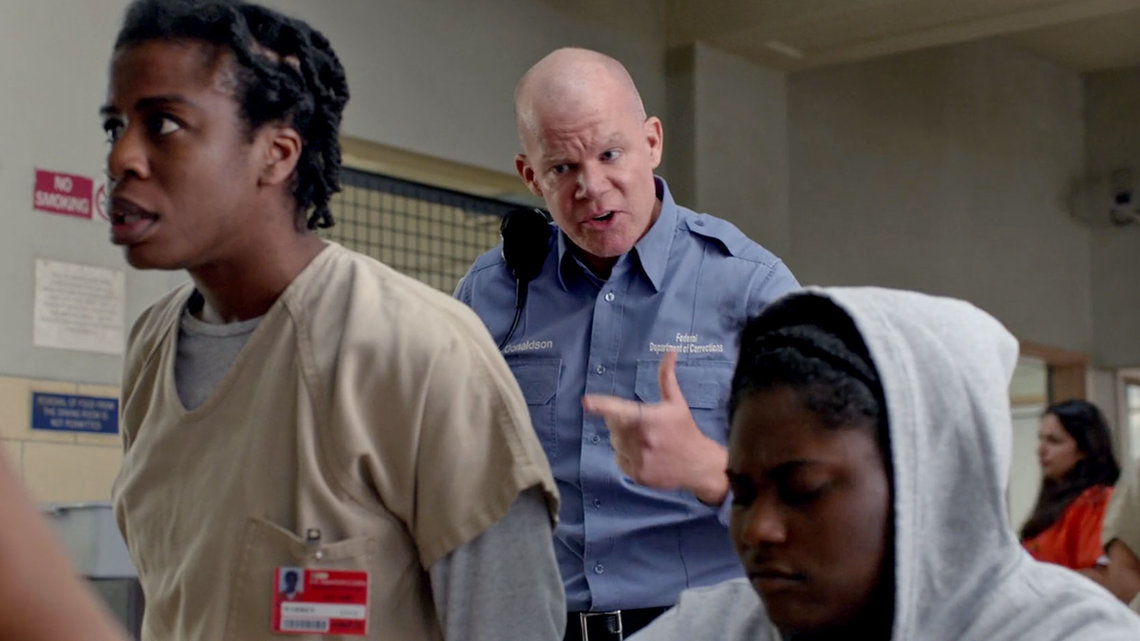 A good CO knows who the authority figures are in the inmate population, and can use them to keep order in certain situations. In a men’s prison, these inmates are known as “shot callers,” and the other inmates will obey them before they obey a CO.

Approaching a shot caller and telling him to get his people in line allows experienced officers to do their jobs and build credibility while allowing everyone to save face. The inmates see that the officer is not merely looking to punish them, the shot caller solidifies his position, and the inmate who started the issue avoids official punishment. This method is not taught at the academy, but is something a good officer learns to do with experience.

In a women’s prison, the inmates don’t typically form gangs, but will form families, with inmates assuming the role of mother, daughter, etc. CO Donaldson recognizes that Jefferson is the “mom” and, therefore, will keep her people in order. So he gives Jefferson a chance to handle the situation. The show captured this dynamic perfectly.