An effective way to curb behavior, or ‘an extreme form of restraint’?

Vincent Barrow had become a problem inmate for staff at Marcy Correctional Facility just outside of Utica, N.Y. Over a three-year period starting in 2008, he repeatedly exposed his genitals to female staff. In March 2011 prison officials decided to try a new approach to control his impulses.

This story was produced in collaboration with The New York World.

They ordered Barrow to wear a jumpsuit made of heavy-duty nylon, commonly used in luggage, that opens from the back and is padlocked around the neck.

The program began in 2010 at Marcy and has expanded to seven other New York facilities, but remains in pilot mode and hasn’t been officially adopted statewide. Prison officials have ordered an unknown number of inmates to wear the padlocked suit at least 80 times since 2011, according to documents obtained from the New York State Department of Corrections and Community Supervision through an open records request.

The directive limits suit orders to 30-day periods, but individual orders can be extended indefinitely. A review of orders indicate some inmates have been required to wear the suits for months on end.

The policy was used exclusively on the most difficult and seriously mentally ill inmates from 2010 to 2011 housed in special medical units and was later expanded to select solitary confinement units starting in 2012. Inmates deemed seriously mentally ill by the Office of Mental Health include those who have attempted suicide, are at high risk for self-harm, or have any condition that impairs their grasp on reality.

Inmates who refuse the suits are not allowed to leave their cells, possibly missing programs crucial to obtaining parole, and facing greater isolation.

Officials at the corrections department and the Office of Mental Health declined to respond to questions regarding the program or its effectiveness.

Several mental health experts expressed surprise and dismay that such a program existed.

“I’ve never heard of such suits being used to treat exhibitionism,” said Richard Krueger, a psychiatry professor at Columbia University who specializes in sexual behavior and likened the suits to chastity belts. “This is an extreme form of restraint.” 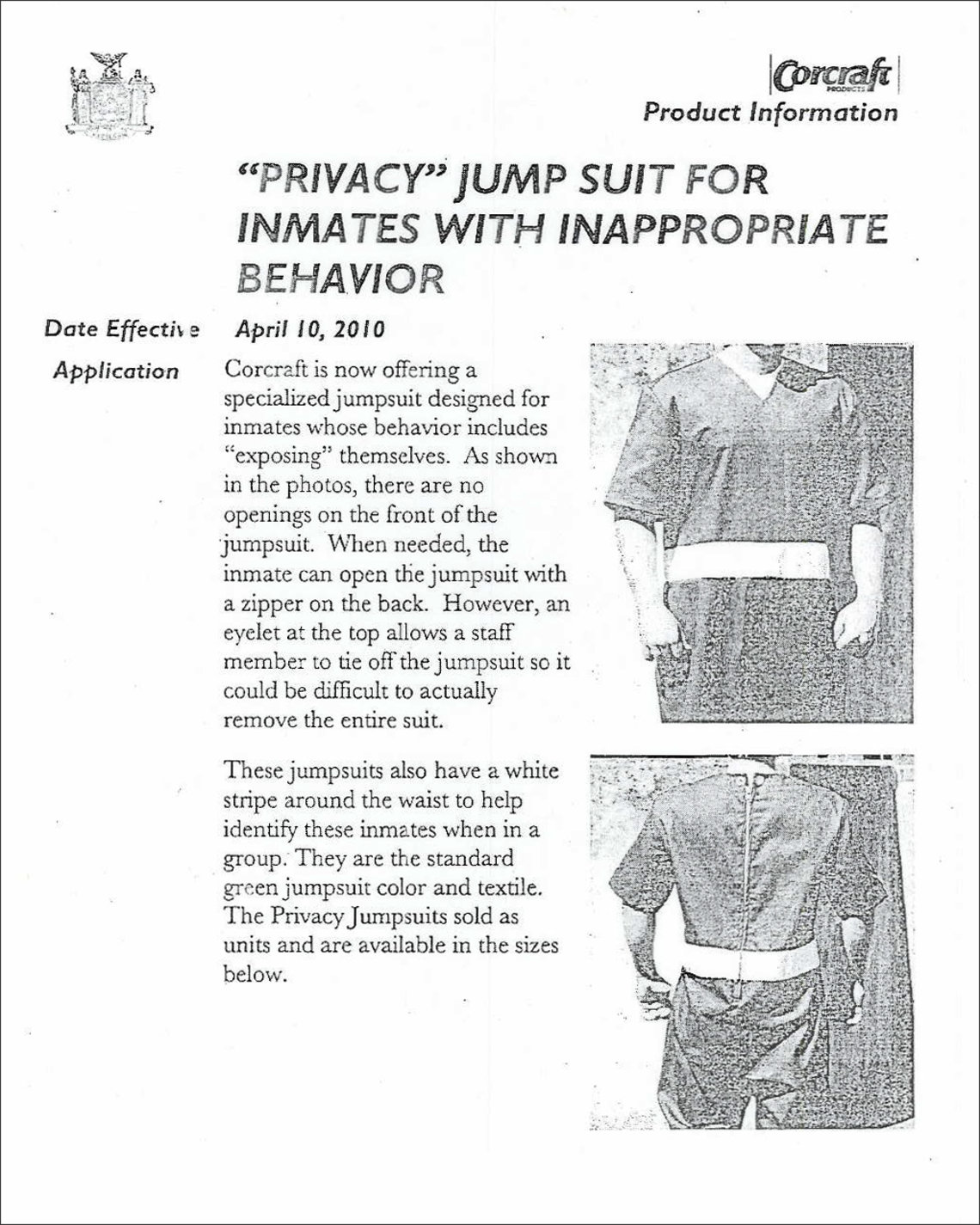 A 2010 product spec sheet for an earlier version of the privacy suit distributed by Corcraft, a division of the New York State Department of Corrections and Community Supervision.

Krueger and other mental health experts said evidence-based treatment for exhibitionistic disorder, which is described as “recurrent and intense sexual arousal from the exposure of one’s genitals to an unsuspecting person,” typically includes psychotherapy and medication aimed at reducing sex drive. Barrow, the inmate, described his own exhibitionist behavior as a “compulsive habit” that he continued despite backlash from prison staff that made his life behind bars “a living hell.”

“Prisons are institutions outside of society,” Smith said, adding that labeling problematic inmates can be both humiliating and potentially dangerous. “That doesn’t mean they don't have to comport with common standards of decency.”

“When they do that to females it’s because they don’t respect that female officer and they know to a certain degree they can get away with it,” she said of inmates who used exposure as a way to harass officers. City jail inmates who exposed themselves repeatedly were typically written up and referred for psychiatric evaluations, Miller said.

The New York program was created, at least in part, to ensure the “safety and security” of prison staff, according to corrections department records.

While state corrections documents say the suits aren’t restrictive or punitive, inmates must be unlocked from the garments in order to use the toilet, and records show inmates who refused to initially wear the garments had their exposure-control orders extended for disobedience.

But Marcy is, by far, the heaviest user of the program, issuing more than 70 percent of orders since 2011. Copies of the records also show that in many cases, top Marcy officials failed to sign off on the orders, which is required within 72 hours.

New York is not the first state to implement alternatives on top of formal discipline to curb exposure.

In 2005, the South Carolina Department of Corrections began forcing inmates caught exposing themselves or involved in any sex acts to wear pink jumpsuits.

“It was really assaultive behavior,” Jon Ozmint, former department director, said of “brazen” young male inmates who exposed themselves to females as a form of intimidation. “If it happened to your wife or loved one on the street it would have been considered sexual assault.”

A federal judge sided with Ozmint when the pink jumpsuits were challenged in court in 2006, ultimately allowing the policy to continue. At the time, Ozmint defended the program by citing the lawsuits in California and Florida.

“It sounds to me like they’re making a comprehensive effort,” Ozmint said of New York’s approach. By preventing exposure, he explained, inmates don’t rack up disciplinary tickets, which can mean time in solitary or jeopardizing parole.

However, a spokeswoman said South Carolina plans to abandon the pink jumpsuits, calling them no longer effective.

The New York program also faced a legal challenge when Barrow, who claims to suffer from depression and exhibitionistic disorder, filed a lawsuit in federal court in 2012 claiming the suit violated the constitutional prohibition on cruel and unusual punishment.

Barrow called the suit “barbaric medieval form of bondage and sadism” that invites “scorn, ridicule, and verbal assaults.” He also claimed he was told by guards that his only other option was to sit in a restraint chair with all limbs tied and was ordered to wear the suit for at least four different periods.

Unable to leave his cell, Barrow couldn’t attend prison programs and was allegedly denied depression medication. He called his situation “a modern day psychological concentration camp,” and in a letter to a reporter, wrote that he refused to leave his cell for a 17-month period from March 2011 to August 2012.

“I’m supposed to be treated for my issues in confidence,” he wrote in the complaint. “With this sign over my door and this suit, this whole prison population know what I am being treated for.”

Barrow, who was convicted of burglary, also claimed he was forced to attend programs for sex offenders, although he was not a convicted sex offender.

Two federal judges rejected most of Barrow’s claims early this year, calling the jumpsuit a minor inconvenience, but allowing a claim about lapses in medical care to proceed.