Is the U.S. Ready for Safe Injection Rooms?

A widespread heroin problem could open the door to a once-radical idea.

This week, a Boston nonprofit announced plans to open a “safe space” where people can come when they’re high on heroin. Dr. Jessie Gaeta, chief medical officer of the Boston Health Care for the Homeless Program, told radio station WBUR that no one will actually use drugs in the room. Rather, it’s for people who are already high and “need a safe place to be that’s not a street corner,” she said.

It would appear to be one of the only of its kind in the U.S. But public health officials in eight other countries have for many years gone even one step further, allowing people to actually shoot drugs under their watch. At about 100 supervised injection facilities around the world, health care providers are available to intervene in case of overdose, connect users with drug treatment resources and provide clean needles and other supplies. Vancouver operates the only such facility in North America. Ireland this week announced plans to open four safe injection sites next year.

“A lot of people are homeless or unstably housed, and when people are injecting in public it tends to be riskier,” says Daniel Raymond, Policy Director at the New York City–based Harm Reduction Coalition. “They tend to rush because they don’t want to be seen. This increases risk for overdose, for spreading infections. There’s logic to saying, if you’re at risk of overdose, let’s at least be inside where someone can respond.”

Many years of research have shown that supervised injection facilities reduce overdose deaths, prevent the spread of HIV and hep C, increase the likelihood that users will seek drug treatment or other medical care, and decrease street crime and discarded syringes in public areas.

But until recently, the idea was a political nonstarter in the U.S. “It's beyond ridiculous to ask Americans to pay for drug addicts to inject themselves with heroin and cocaine,” South Carolina Sen. Jim DeMint said in 2007 after the San Francisco health department co-sponsored a day-long symposium to explore whether a supervised injection facility might help to address some of the city’s longstanding problems with public drug use in its Tenderloin neighborhood. DeMint introduced a measure (which failed) that would have banned federal funding for supervised injection facilities. Then–San Francisco Mayor Gavin Newsome said he did not support the idea, and Office of National Drug Control Policy official Bertha Madras called the conversation “disconcerting.”

“This is a form of giving up,” Madras said.

Raymond, one of the event’s organizers, said, “It just kind of crashed and burned. The country wasn’t ready for this conversation.” It wasn’t until 2009 that the federal government ended its decades-long ban on federal funding for needle exchanges. Supervised drug injection was just a step too far.

But with the recent spike in opiate use and overdose deaths, which have hit white, rural and suburban communities especially hard, has come an emerging national recognition of drug addiction as a public health problem.

And with that recognition comes a tentative embrace of a philosophy known as “harm reduction.” Pragmatic rather than punitive, harm reduction operates with the assumption that the next best thing to preventing drug use altogether is minimizing its harm. This approach ushered in needle exchanges in the 1980s, and more recently has driven advocates and health departments to begin distributing Narcan so drug users can reverse overdoses at home. In 2001, there were two official Narcan-distribution programs. Only one state—New Mexico—had legal protections for those who prescribed or used Narcan. Today, more than 100 Narcan programs are operating 30 states, and 37 states have passed a Narcan law. 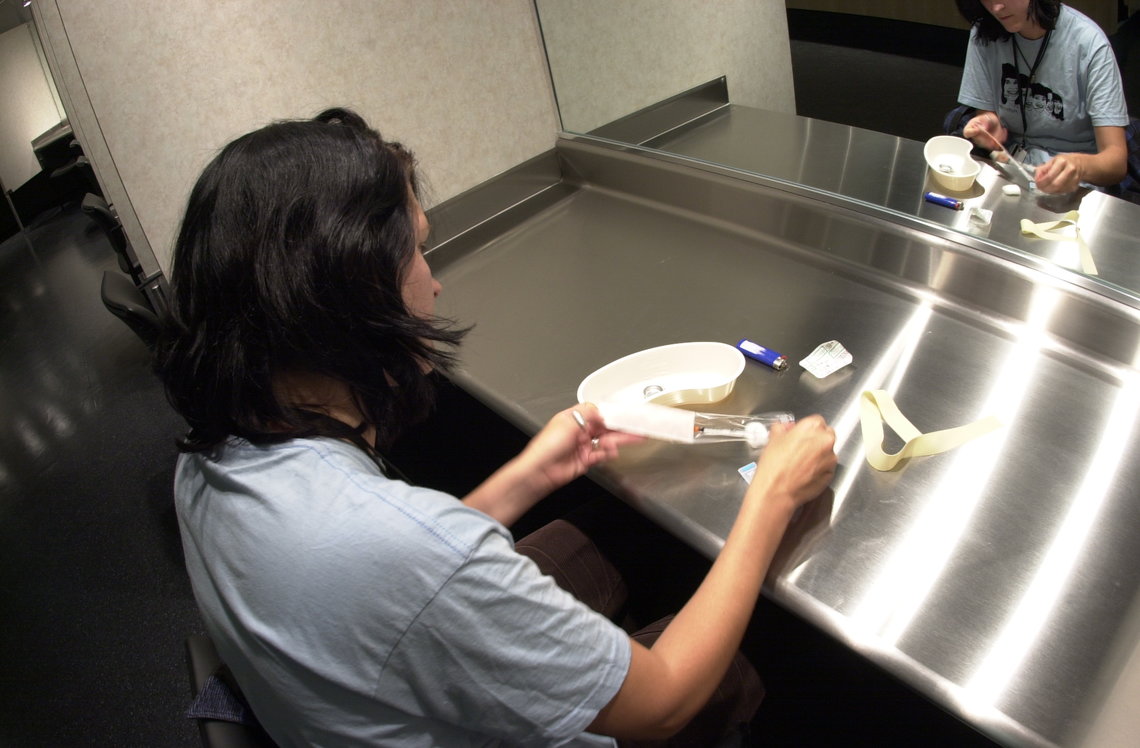 An peer counselor at Insite demonstrates how someone would use one of their injection booths.

Reaction to this week’s announcement in Boston reflects the change in attitude. “I’m up for trying anything when it comes to addiction and active using,” Boston mayor Marty Walsh told WBUR. “If we can help some folks, homeless folks in particular, we should try anything.”

But Boston’s safe space stops short of being a supervised injection facility, and some don’t think the plan goes far enough. “I don’t find that there’s anything controversial about what they’re doing there,” said San Francisco-based epidemiologist Alex Kral, who studies supervised injection facilities. “People who use drugs can be in pretty much any spaces they want to.”

Around the country Kral has heard from social service agencies with what he calls “safer consumption bathrooms.” Knowing that clients will use drugs in the bathroom no matter what they do, these organizations have stocked the rooms with clean needles and Narcan and taken other safety measures. “They’ve got a door that is cut out at the bottom of it so that someone outside can see if someone has fallen to the floor. They have doors that have timers on them that automatically open after five minutes,” Kral says.

One organization has gone even further, Kral says, operating an actual supervised injection facility with mirrors, stainless steel counters, and a staffer trained in overdose prevention and other harm reduction techniques. However, the staffer is a layperson: nurses, EMTs, or doctors would risk their medical licenses by being involved. The facility lacks any certification or oversight—it must operate underground because it’s breaking several laws.

Organizations looking to launch an official supervised injection site could find workarounds in state law—health departments can seek legal exemptions in the case of a public health emergency, for example—but would still be vulnerable to federal prosecution. Federal “crack house statutes” make it a crime punishable by up to 20 years in prison to “knowingly open, lease, rent, use, or maintain any place… for the purpose of manufacturing, distributing, or using any controlled substance.”