A 5-year turnaround is cited as a model of prevention.

Inmate rape has long been a plague of jails and prisons, but Miami’s jailers didn’t think they had a real problem. That changed abruptly in 2010, when a federal report listed one of the city’s five jails, the Pretrial Detention Center, as one of the worst in America for inmate sexual abuse.

Designed more than a half century ago, the center is a warren of dark corridors and dense rows of bunk beds. A survey of inmates by the Bureau of Justice Statistics five years ago found that the inmates were sexually abused at four times the national average. At the time, the only direct supervision took place when guards made their hourly rounds.

Five years later, the detention center, as well as the system’s four other facilities, are being recognized as a national model for prevention by Just Detention International, an advocacy organization that works to stop prison rape and that partnered with the jail to address the problem. In July 2014, a federal audit found that Miami’s system, the country’s eighth largest, became one of the first large urban jails to comply with federal prison standards for protecting inmates from sexual assault. It was a “monumental achievement,” a federal monitor wrote in 2014. The achievement is even more notable, given the jail’s notorious history of violence, overcrowding, and lack of treatment for the mentally ill.

Is Miami’s system problem-free? Hardly. But recent efforts have gone a long way toward making a big difference. Since the 2010 report, about 1,500 cameras have been mounted across the jail system at a cost of almost $1 million. Staff movements are now tracked to ensure guards are checking on inmates. Thousands of officers have been trained to recognize the signs of sexual abuse, and how to handle it, whether it happened between inmates or involved one of their own colleagues. Posters and a video were produced to tell inmates about new ways they can report abuse, including an anonymous hotline. Local police are now notified of every allegation.

But staff members say the most significant improvement has been changing the attitudes of the officers and managers themselves.

The threat of sexual abuse was a laughing matter to many before the jail began its changes. “I used to tease guys about it, making soap-on-a-rope jokes, thinking I’m being humorous,” said Capt. John Johnson, who was supervisor of the detention center when it was rated on of the worst in the country. The news had come as a shock. “It was embarrassing,” Johnson said. “To be perfectly blunt, at first, I wanted to fight it. I kept thinking, these numbers can’t be right.” He came to accept the survey results, and is now a leader in many of the jail’s prevention efforts.

The size and complexity of the system complicates reform. With over 1,000 inmates on some type of psychiatric drugs, Miami’s jail system is the largest institution for mentally ill people in Florida. It also books a new inmate every seven to eight minutes, which strains the aging structures. 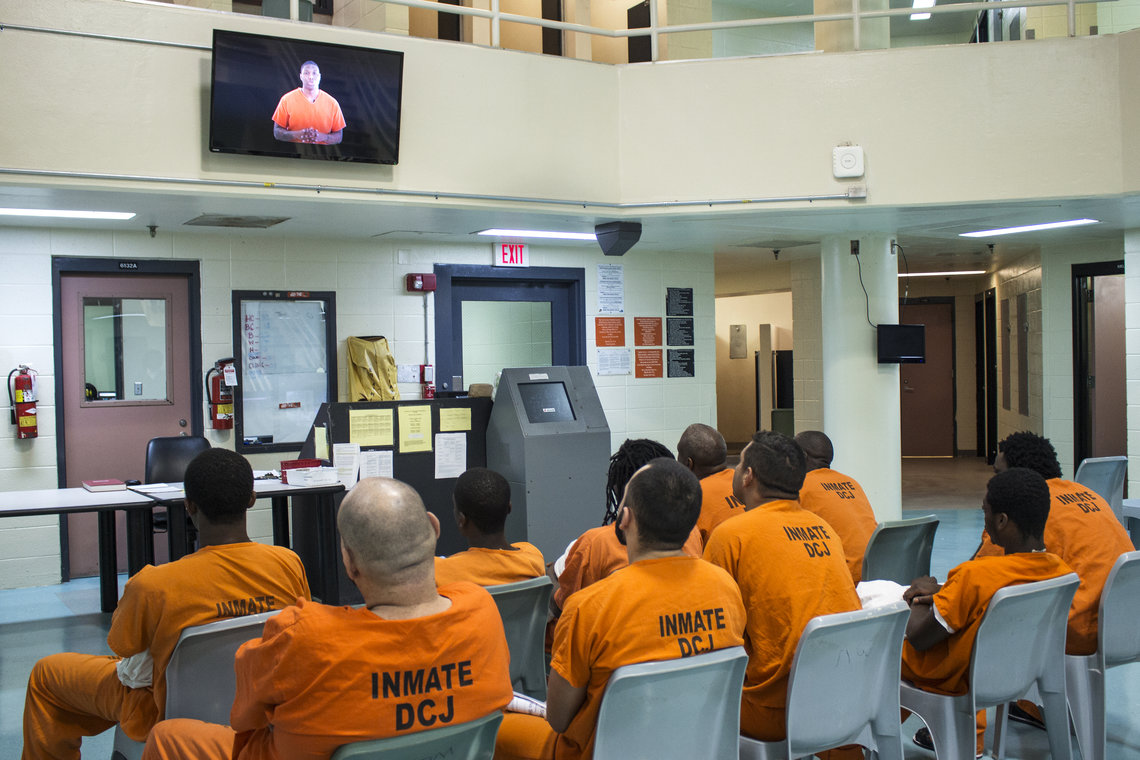 A group of newly arriving inmates are shown a video that describes the jail's policies to detect and prevent sexual assault.

Opened in 1961, the detention center was designed as an intake center for 30,000 people a year but now handles well over 70,000 annually. The cellblocks are narrow and dimly lit, and before the cameras were installed, it was difficult to see what was happening behind the bars.

“Back in the day, there was no cameras,” said Jose Barahona, who said he had been in and out of Miami jails since 1998. “They’d whoop your ass and you laid by that door until they did count.” Now, he said, “This is daycare.”

The improvements in Miami are intended as a blueprint for other jails across the country, which are working to comply with the Prison Rape Elimination Act, a 2003 federal law that established standards to prevent and detect sexual abuse. When the law was first introduced, Tim Ryan, then the president of the American Jail Association, lobbied against it. “At that point, we didn’t see it as an issue,” Ryan said. In 2006, he became director of the Miami jails, and like so many others, eventually had a change of heart. Ryan has since retired, and has been blamed for many of the jail’s problems, but staff say he’s the one that led the charge to bring the jail into compliance with the federal standards. “I’m a realist in the sense that I don’t think we can stop it, but if we have three a year, let’s go down to one,” Ryan. “Things go wrong, I can tell you.”

On any given day in America, more than 700,000 people are in jail, most of them awaiting trial or serving short sentences. The federal government’s prison-rape standards were finalized in 2012, but it’s unclear how many jails or prisons are in compliance or how quickly they are moving to adopt the standards.

In Miami, however, the pressure to improve has long been mounting. In 2011, the Justice Department concluded a three-year investigation that found the jail system had engaged in a “pattern and practice of constitutional violation” of the rights of inmates. A BBC documentary released that same year showed men packed in tight quarters and living under a brutal social code created by the inmates themselves. A series of deaths in 2013 further heightened the jail’s reputation as a house of horrors, the most high-profile of which involved a mentally ill man, Joaquin Cairo, who claimed a fellow inmate propositioned him for sex, then attacked him when he resisted. Cairo eventually died of his injuries.

The main jail’s current supervisor, Capt. Eddie Denson, says the jail is far from perfect, but that their endeavor is in earnest. “When you know differently, you do differently.”

As is often the case, success in prevention uncovers more contagion. Since establishing reforms, the number of reports about sexual abuse and harassment at the jails more than doubled, from 18 reported incidents in 2010 to 41 in 2013. In 2014, the total was 26. With changes like the ones in Miami, such spikes are not unusual, said Marcia Morgan, the executive director of Migima, a corrections consulting firm hired by Just Detention International to evaluate the Miami jail project from 2010 to 2013. “I think the bigger piece is the cultural change,” said Morgan. “There was a lot of fear in the beginning that inmates will just report all the staff, so why should we educate these inmates anyway?” 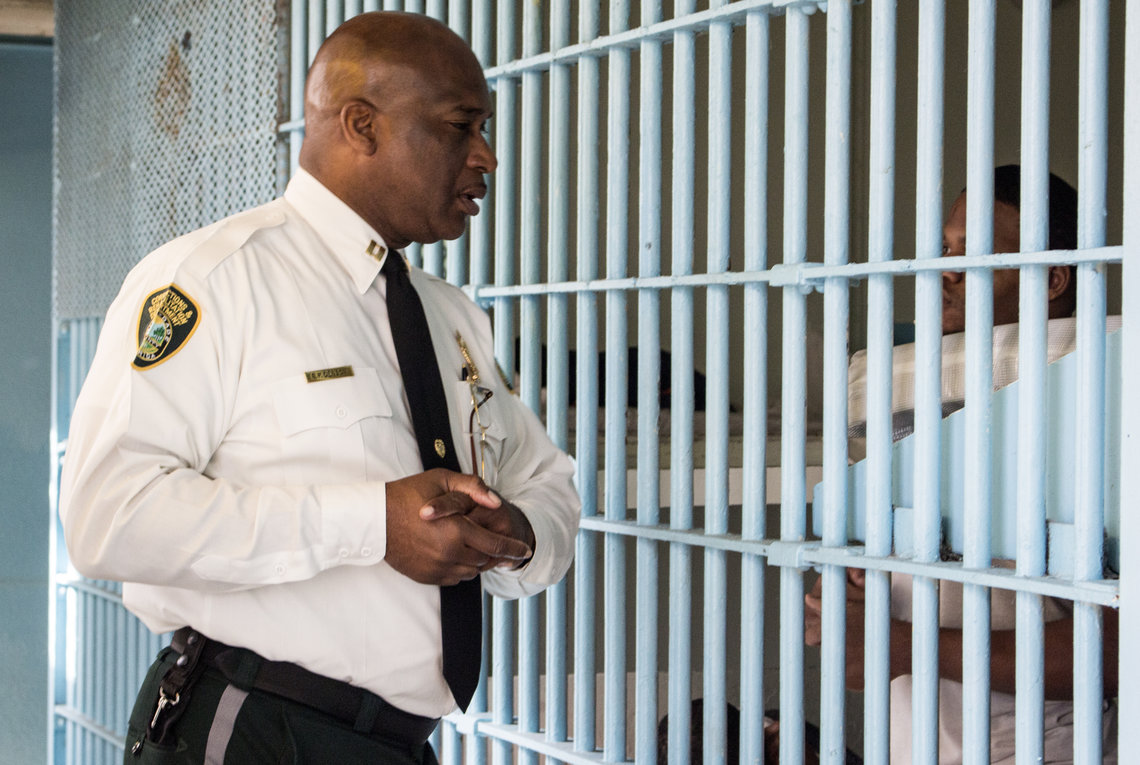 The main jail’s current supervisor, Capt. Eddie Denson, spoke with inmates being held at the jail this November.

Where there used to be little communication between departments, there’s now cooperation. Recently, a mentally ill man being held in the jail made a total of nine complaints that he was sexually assaulted. For each incident, the protocol is to bring the person reporting abuse outside the jail to the community-based rape treatment center. Although officers were not sure the man’s allegations were legitimate—one officer said he thought the man might be looking for a way to escape—they are making sure to follow the new protocol. This includes convening a meeting every other month of the Miami jail system’s Sexual Assault Response Team, a group of jail and medical staff and local law-enforcement officers. The group agreed that from now on, this inmate would only be held in a cell where he could be seen on camera at all times.

More than one-third of females in jail and 5 percent of males in jail were sexually abused prior to their incarceration, according to federal statistics from 1999, the latest year available. Carmen Arevalo, who is being held at the Miami jail, said she’s been in and out of prison for the past two decades, and believes her life of crime began when she was raped by her stepfather when she was 7. She is now one of the jail’s peer educators—another new program in which inmates are trained to explain sexual abuse protocols to other inmates and serve as confidants. “When staff do favors for you, they might be grooming you for sex,” she warned a group of 10 women who recently entered the jail this November.

“We all have a story here, and a lot of us have been sexually abused,” Arevalo later said. “This is a difficult and awkward topic to discuss.”