On being pent up.

I close my eyes and think of Disney’s characters, hoping the G-rated images chase away some of the insatiable desire. I imagine Daffy Duck slapping Mickey Mouse. Goofy appears, trying to break up the fight. Then Minnie Mouse shows up in a short skirt, with fishnet stockings, and...

Reaching up, I turn on my television, hoping the morning news will calm me down. The anchor appears on the screen, and watching her full red lips deliver the news makes things harder. I turn off the television.

I start to inhale and exhale, long and slow. Inch by inch, blood finds somewhere else to flow.

As usual, Old Man Bobby (not his real name) is still asleep on the bottom bunk. The 55-year-old has been incarcerated for over 20 years. He is a cool cellie, but our schedules clash. He wakes up after me, goes to work in the kitchen to prepare dinner, but returns at the same time I do. I hardly get any privacy.

Today I have an appointment at medical right after breakfast, so I need to hurry. If I’m late, they will start calling my name over the loudspeaker. If I don’t answer, they will call everyone back to their cells in order to find me. All that to get me there on time only to have to wait hours to be seen and told nothing is wrong and sent on my way. I hate the overcrowded medical-treatment dance, but I go to keep reporting my symptoms — of fatigue, dry mouth, low blood pressure, cramps in my toes, and weird bowel movements. 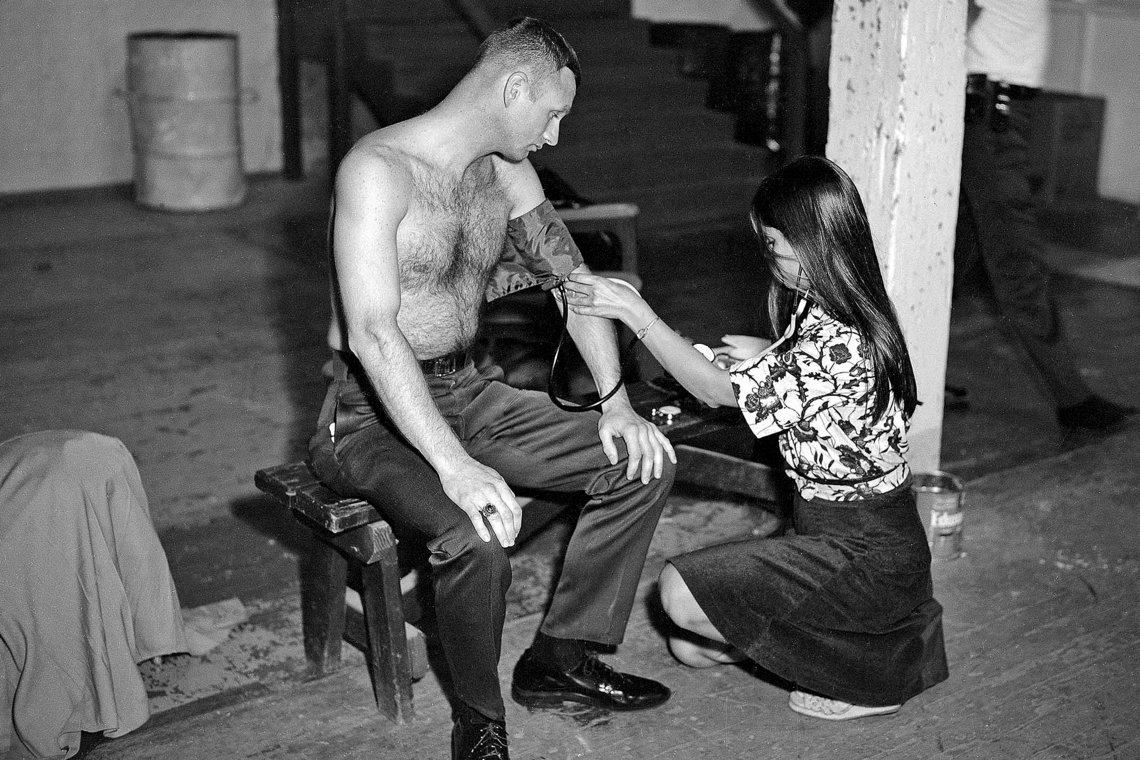 A woman takes the pulse of an unidentified man at San Quentin in an undated photograph.

Here’s the one good thing about going to medical: the majority of the staff is female. Leaving a world filled almost entirely with men to one dominated by women balances the unnatural prison universe.

I used to take women for granted. Like Nas once said, “You lose money chasing women, never lose women chasing money.” I had devalued women. I had devalued love. And in doing so, I had devalued myself. I miss being loved. I miss having someone concerned about what happens to me.

Studies show that conjugal visits are awesome for rehabilitation, but the rules for lifers in California, combined with harsh sentencing laws, mean that having the comfort of a woman is out of my reach. Anyone who tries to love me would be serving out a life without affection.

For a lot of men in prison, it’s a struggle to stay sane. Some stalk any woman they see working in the prison. Some straight, incarcerated men become prison gay. Some men become cold and violent.

On the way down the tier, I see a poster of a curvaceous Hispanic woman in a bikini taped to the inside of an open cell door. My eyes are glued. I prefer not to keep pictures of half-nude women in plain sight to prevent myself from going crazy, but I can’t control every man in this place.

Outside the dining hall, the chow line is long but moving fast. One of the correction officers walking towards me has long, braided hair and the kind of lips you want to kiss forever. I have to avert my eyes, reminding myself that her lips aren’t thinking about me, so I shouldn’t be thinking about them.

I receive my food without ever seeing who passed it to me. Looking at the small portion of scrambled eggs with the beans on the side, I remember the last breakfast I ate before being arrested. She had gotten up early. From under a blanket on the living room floor, I watched her prepare the meal in a short robe. Then the U.S. Marshals started pounding on the door, shattering the moment. They took me away in handcuffs without allowing me a kiss goodbye or a bite of the breakfast. Now my meals are cooked without care and served in a large dining hall where men sit at self-segregated tables.

In five quick scoops, I devour the balmy eggs and get up to leave.

On my way to the medical building, I glance inside the mainline law library entrance and see that the condom dispenser is half-empty. A new law passed in September of 2014 that requires the California Department of Corrections and Rehabilitation (CDCR) to make condoms available to inmates. We can have three condoms, although the CDCR does not condone having sex. Since people have sex anyway, the logic is that making it safer can help limit the spread of diseases inside, and eventually outside, of prison.

I check my reflection in the law library’s glass windows. Everything is in order — I am ready to be seen.

When I reach the doorway to medical, the correction officer at the front desk catches my eye. She has rosy red hair and green eyes. I calmly say, “Thomas for medical,” while handing over my ID and a slip of pink paper that has my name and appointment time printed on it. Her eyes show no signs of attraction. She scans the appointment slip and says coldly, “Go to the right.”

I go to the right, and another officer is standing behind a podium. I hand over my ID and take a seat to wait for a nurse to call my name. It will probably take hours. Nurses pass by constantly, my eyes in close pursuit.

“Here,” I answer, surprised at being called so fast.

I follow her into the small office, and she tells me to have a seat and starts checking my blood pressure.

“Oh, I’ve only been in San Quentin for about that long. Hey, wait a minute — I don’t know if we should take you back. You left us for two years.”

“Oh really?” she says. “Who else would call you back here this fast? Do you really want to go back to waiting hours to be seen?”

The band around my arm fills with air and squeezes me like a clamp. Then the pressure releases. The numbers 85 over 60 appear on a small screen. I ignore the reading.

“You know prisoners have abandonment issues. How can we trust you again?” I tease.

“You weren’t even here when I left.”

“True, but that means I missed out on the pleasure of meeting you until now. All those times I waited two hours to be seen are your fault.”

“Just be happy you don’t have to wait so long any more,” she says, smiling.

Placing one gloved hand lightly on my shoulder, she uses her left one to remove the armband. The contact is fleeting and innocent, but still thrilling. She smells like soap.

Rahsaan Thomas is a 45-year-old inmate at San Quentin State Prison in San Quentin, Calif. He has served 15 years of a 55-to-life sentence for 2nd-degree murder, with a 35-year enhancement for using a firearm.