An encounter with the Bard transforms a troupe of inmate actors.

Just north of New York City sits Sing Sing correctional facility, one of the most well-known prisons in the nation. Less known is the annual theater performance that takes place there, starring inmate actors and run by the nonprofit Rehabilitation Through the Arts, founded by Katherine Vockins. “This isn’t about becoming an actor or musician,” Vockins said. “We use art forms as vehicles to teach life skills.” This year, the troupe put on Shakespeare’s comedy “Twelfth Night” to join celebrations worldwide marking the 400th anniversary of the playwright’s death. (Unlike in the Bard’s time, three women actors played the female parts.)

RTA is in five New York State prisons but began at Sing Sing 20 years ago, where it remains a popular program — the current waiting list is almost 100 people. For many of this year’s performers, learning to understand Shakespeare’s words and themes converted them into passionate fans. The Marshall Project sat in on one night’s performance and spoke with some of the players. (Their responses have been edited for length and clarity.)

Incarcerated in 2007 for second-degree murder; serving 46.5 years to life

This is my second experience with Shakespeare. In 2009, for my first play, they cast me right into the role of Macbeth. I had the bulk of the dialogue, which was the greatest challenge of my life. I didn't realize the impact the play would have on me. People really accepted it. Like, "Wow, yo, I enjoyed that. Thank you." That meant something to me.

At that time, I was still trying to hang on to a portion of my past lifestyle. I felt I had to have a weapon. I got caught with it, and was transferred to some of the worst prisons in the state. That whole transition period was like, wow. I sacrificed so much for that one little thing. I yearned to get back to a prison with RTA, because it's not extensive throughout the state. I made it my mission.

I experienced abuse when I was younger. I didn't realize going throughout my life my anger extended from the abuse. Whether it was the reflection of hearing my mother scream when she was being abused and being a child and not knowing how to identify with pain and anger at a certain age. I found that later on in life that being able to perform transferred some of that pain.

My favorite Shakespeare line is: “To be thus is nothing but to be safely thus.” Meaning just to be is not enough. I have to feel safe.

Incarcerated in 2009 for first-degree burglary; serving 20 years to life

At one point in the play I’m supposed to do a huge explosion of emotion. Normally, as a person, I don't react like that. I want to be more cool and calculated. So, I had to go past that barrier.

What I learned from Shakespeare is that, although it was 400 years ago, people are people. Our nature hasn't changed that much. We translated the language into modern day terms on our own so we could own it. Then I know what I'm saying so I can express it physically.

With acting, it makes you more conscious. It helps you identify with people. You have to imagine how other people feel because you're playing a character.

Believe it or not, I couldn't read before I got into prison. I'm from Brooklyn. How I grew up, I'm a product of my environment. Everything about that is drugs, the gangster life. I used to be Blood. I taught myself to read. I started with the hood books. [The rapper] 50 Cent, he wrote some books. It was something that is violent, negative, but it got me to read. Then I got tired of reading that stuff.

When I first heard we were doing “Twelfth Night,” I'm like, "It's Shakespeare. What's to be excited about Shakespeare? ‘To be or to not to be is the question.’” I was making fun of it, just a little bit. I didn't understand it at that point. I seen magic on the first day when we did it. The magic was the laughter, the enjoyment, where you have people who are in prison who are doing a lot of time. In the end, we created something within Shakespeare and made it our own.

Being Valentine, he plays a submissive role because he's the servant. I've never been submissive in my life. It was challenging. But now I respect that the submissive role is not a negative thing. It's just the passion Valentine has for his job. That this is what he was born to do.

Incarcerated in 1999 for second-degree murder; serving 21.5 years to life

In this play, I get to be an officer, of all things. I give it 100 percent of what I feel that it needs. It needs a little bravado, some seriousness to it. Maybe that look like I got some authority: “You've got to come with me. Don't question it.”

The first time I read Shakespeare, I was in SHU [solitary confinement]. I wanted to kill some time. Somebody threw down a play; it was “The Taming of the Shrew.” It was really hard language at first. I put it down and I was bored for a long time. Then I said, "I'm going to fight through it," and I enjoyed it. I wrote to somebody that I know who would get me books, and they sent me one of those big compilation ones. I really like “King Lear.” I like “Othello.” I like “Macbeth.”

The actors at the end of the show (left), whose stage manager was Omar Williams.

When I was coming up, I thought Shakespeare was just for white people. After learning about Shakespeare, he has no color. He has no boundaries. I've come to find out that lines that I've been hearing all my life is Shakespearean. “Some were born great. Some achieve greatness. Some have greatness thrust upon them.” That's a Shakespeare line.

We did a show called “The Wizard of Oz,” and my favorite song is now “Somewhere Over the Rainbow.” It makes me cry. You're not supposed to show no weakness or willingness to cry, but now, things really touch me. Anybody can relate to that song. Everybody wants to be over the rainbow. 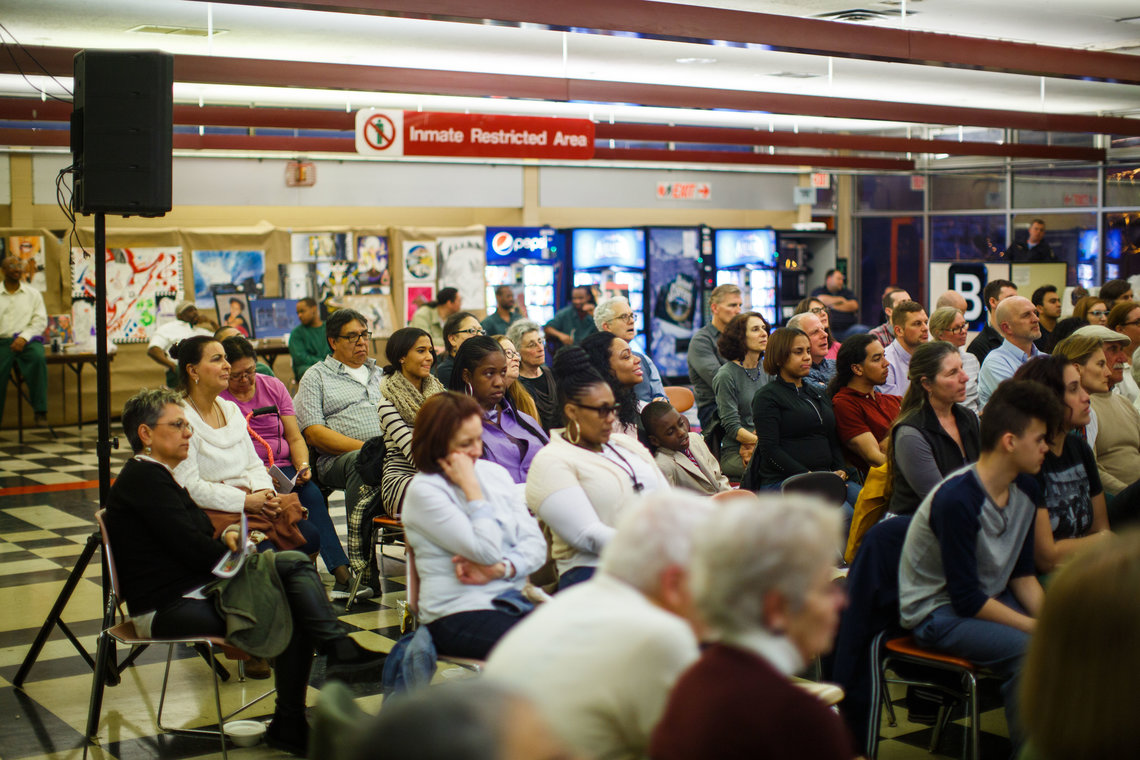 An audience of 250 went to Sing Sing to watch the prisoners’ version of “Twelfth Night.” 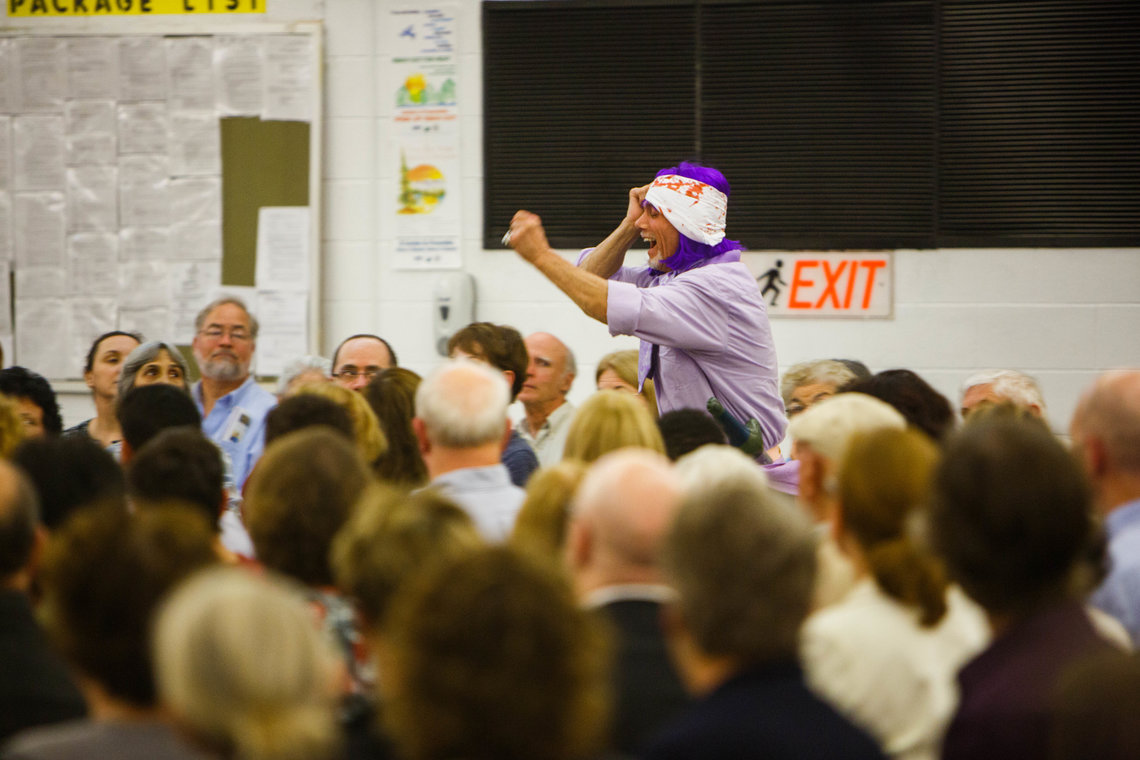 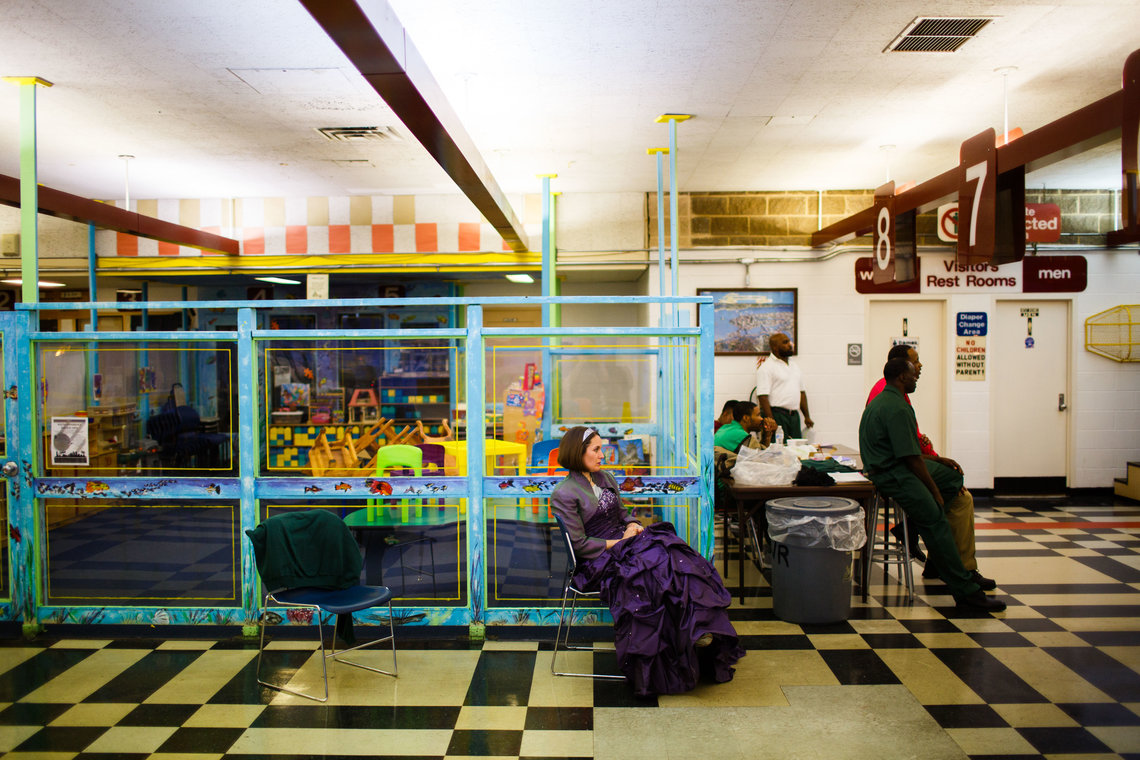 The performance took place on a stage set up in the middle of Sing Sing’s visitors’ room. Dawn McDonald, who played Olivia, waits beside a play area for children who visit their parents at the prison. 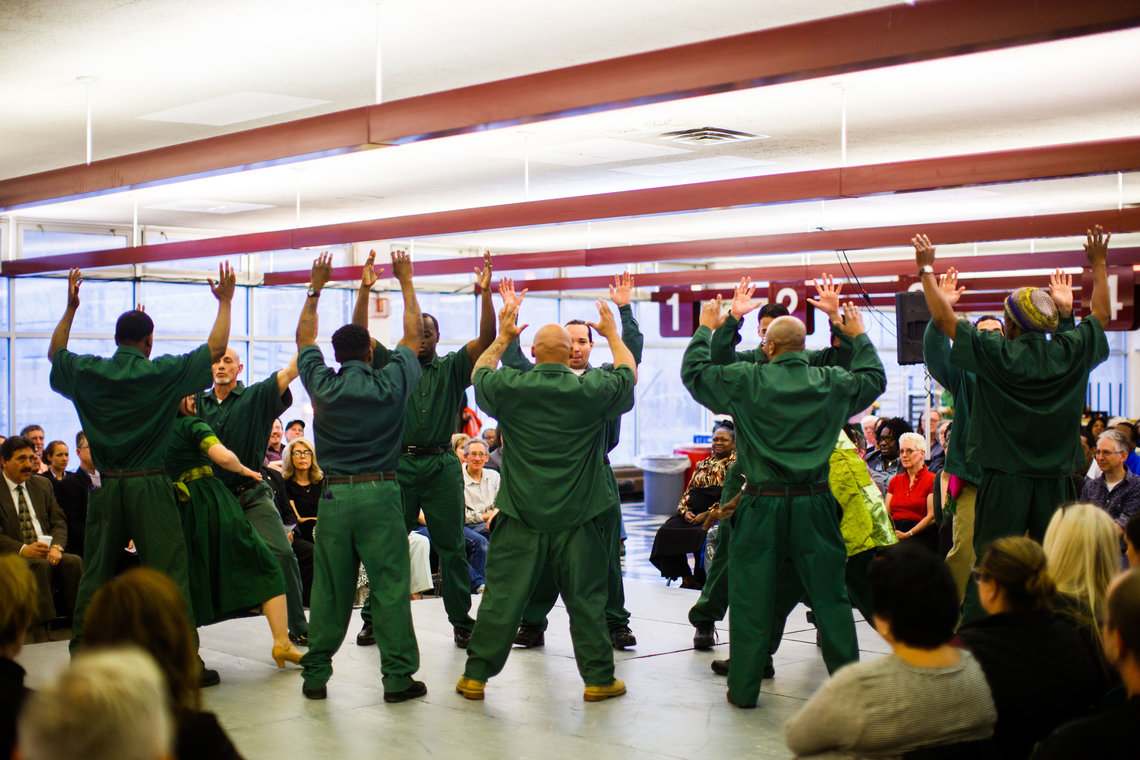 The RTA program at the prison has 45 members in its theater group, 13 of whom performed in “Twelfth Night.” 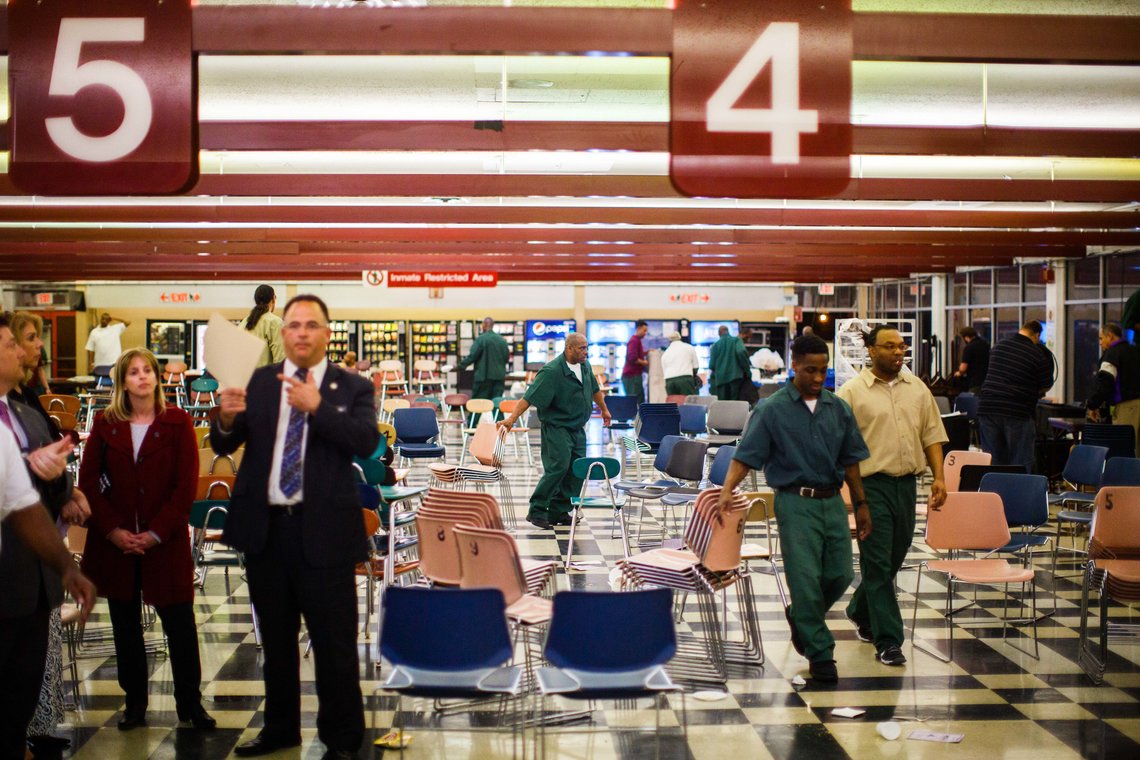 After the show, the prisoners restored the visitors’ center to its everyday appearance.