Who knew cell phones had a smell?

Two years ago, a Belgian Malinois named Drako earned a flurry of press attention when his proud owners at the California Department of Corrections and Rehabilitation announced he had found his thousandth contraband cell phone in the state’s prisons. He’d once found thirty stashed in a microwave, and one hidden in a jar of peanut butter.

But Drako was only the most famous of a growing number of dogs around the country trained to find cell phones. Usually they are a specially-trained subset of canine units employed to find drugs. They have been used by prisons in New Jersey, Pennsylvania, Maryland, Ohio, Virginia, and Florida. Texas and California have 13 cell phone dogs each. 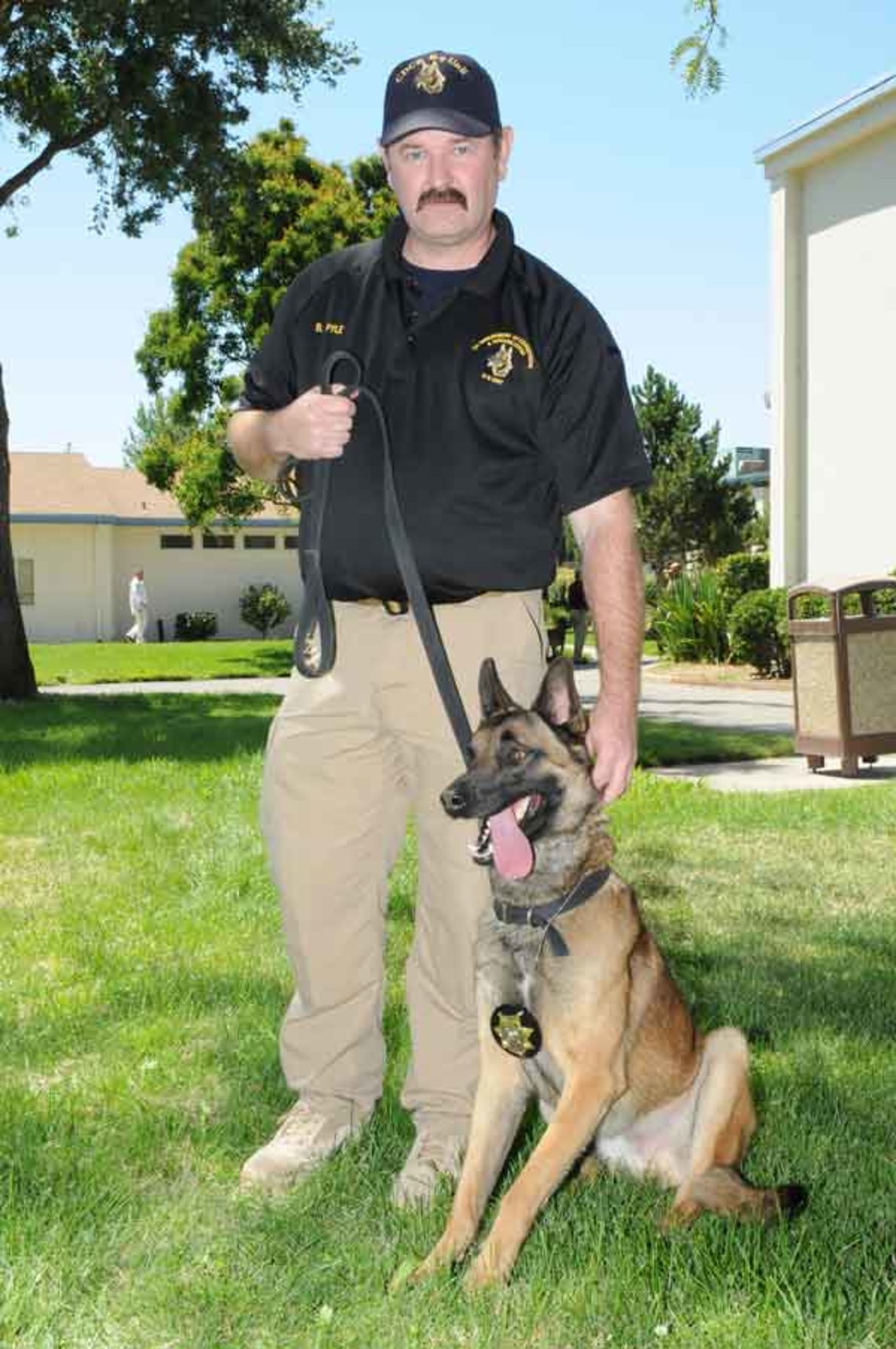 Drako, the dog who found more than a thousand cell phones in California prisons, with his handler Bryan Pyle.

The pervasiveness of illegal cell phones in American prisons is consistently described by officials as a security threat, allowing gangs to organize across the walls and prisoners to harass their victims. But some inmates have described the prevalence of cell phones inside as a product of their desperation to maintain contact with family and friends on the outside, since sanctioned phone calls are notoriously expensive.

The dogs can do this because cell phones have a smell. The psychologist Stanley Coren once wrote that he left a collection of cell phone parts in boxes for ten days and opened them to find “a sweet metallic smell that I might fantasize that a newly built robot would have, with perhaps a faint ozone-like overtone.”

To learn more, we spoke with Capt. Scott VanGorder, who runs the Pennsylvania Department of Corrections Drug Interdiction Unit. He has trained dogs and handlers for prisons around the country. This conversation was edited for length and clarity.

How do these dogs actually learn to sniff out cell phones?

Cell phones are, essentially, just another odor. In order to get the dogs to find phones, we imprint them with lithium niobate, since lithium is commonly found in cell phone batteries. I know about other prisons who just crush up a cell phone and use the whole bouquet of the cell phone and battery as the odor to train the dog. I don’t do that, because I think you’ll get other odors mixed in with it. If you train your dog on circuit boards, they might just find things that are allowed in the prison, like mp3 players or radios. And if you crush up a lithium battery, that’s dangerous; if a dog slobbers on it, it can become volatile.

With lithium, the idea is to get the purest sample we can find. Just like how when you train a dog for cocaine, you imprint the dog on the purest sample you can find. If I train a dog on a cocaine that’s off the street and been cut 10 or 15 times, I’d be training him to smell all sorts of different things. But if he’s trained the purest cocaine, it doesn’t matter what it’s mixed with; he’ll just smell cocaine. If you want a dog that finds tomatoes, you want your dog to be trained on fresh, vine-ripe tomatoes, not tomato sauce. Otherwise he’ll find oregano, parsley, and onions.

I imprint the dogs on the odor of the battery, and then I train them to recognize different amounts, different thresholds of the odor. You want the dog to be able to smell a lithium battery, but then also a SIM card or another part of a cell phone that was next to a battery — a lot of the odor and a little of an odor and everything in between. 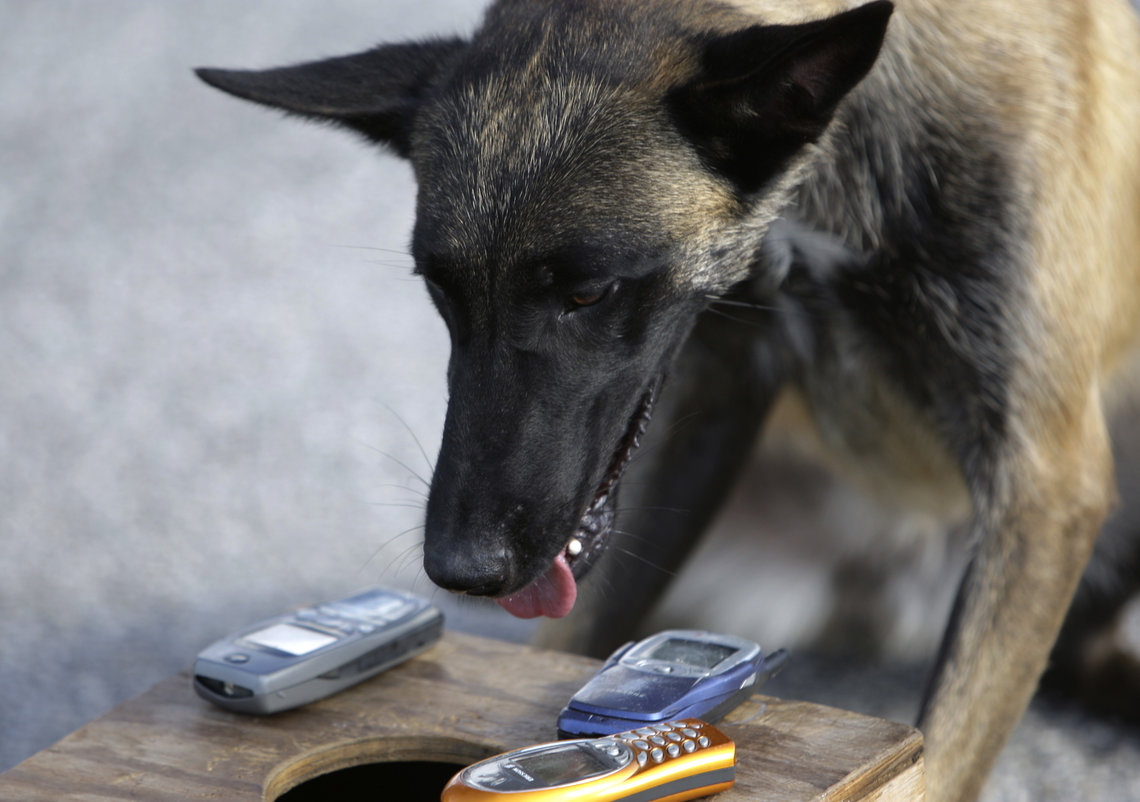 Razor, a phone-sniffing dog, poses with phones he found hidden in a box during a demonstration at the Broward Correctional Institution in Ft. Lauderdale, Fla. in 2008.

Where do you find the dogs, and how do you select them? What makes a dog ideal for this work?

We get them from private donations. People have a dog they can’t handle anymore and they’ve heard about our program. Sometimes shelters will call us, or we’ll visit shelters.

We like to use dogs that are bred for air sensing. They have their heads up and are naturally checking the air. People ask: why not blood hounds and beagles? They do an okay job, but they mainly search the ground. They are at the airport checking purses for bits of agricultural material. But we want our dogs to check the air in the cell, to find drugs and cell phones in walls and higher-up spots.

So we use German shepherds, Malinois, German shorthairs, labradors. Golden retrievers will work, too.

We also want to see a high degree of hunt-drive, a frantic desire to retrieve and to hold onto the dummy or doll or ball to reward them. Not a dog that will lump along and do it once or twice. I’m looking for possessiveness, a dog that can see food and not care about it as much as about the thing in his mouth.

Our training is 11 weeks, which is long for detector dogs. When you’re training a green dog and a green handler, it’s like teaching the two to dance together. We’re teaching the dog to hunt and the handler to guide and direct him so the hunt is efficient and systematic. That takes a while.

Actual drug detection work is not work for the dog. The dog is not going to work — it’s a game for the dog, trying to get their toy, trying to find what they’re trained to find to get their reward. So we get a rolled up towel or a doll or a dummy and make it smell like the thing we want them to detect. Then eventually we replace the towel with the drug or battery. Then when they find it, we give them the towel as a reward.

They truly believe that their toy is what they’re looking for. So it’s a big game for the dog. You see these dogs searching. You need to keep it as a game. So you have to tug at the toy, and go “wooooo.” Doing that over and over again they build a special bond that makes them best friends. You have to keep it exciting and invigorating.

One thing we try to instill in handlers is when the day is done, you take the dog to the kennel. We don’t want them to take the dog home, which is something that happens often with search dogs. If you take the dog home and let them play with the kids the whole time, he won’t be as anxious and ready to go the next morning. He gets the attention all night so he doesn’t need it the next day at the prison.

How many cell phones do these dogs actually find?

We don’t have nearly the problem that other states do: California prison officials find thousands every year. In Pennsylvania, we find maybe 40 to 60 cell phones a year, and the dogs are finding maybe a fifth of those. You find cell phones and bits and pieces, but they are constantly on the move. Sometimes we won’t find a phone, but it will validate a suspicion that someone has been trafficking and we need to keep an eye on him or her. It’ll help you find the trail. A lot of times with phones and drugs you use the dogs to find out where the contraband has recently been; since they knew you were coming they transferred it somewhere else very fast. But then you can come back later or check out that same prisoner’s workplace or give a urine test. Searches don’t always produce phones, but they do produce intelligence.

What are some of the stranger places your dogs have found cell phones?

Sometimes when you go and search, everyone will know you’re coming and stash them, and you’ll go into the dayroom and you’ll find them everywhere — toasters, seat cushions, soda machines, ceilings.

One time we searched a federal institution, the maintenance area. The dog found the electronics desk and everyone thought, ‘Oh well the dog is just trained to find electronics.’ But then there was a hole in the wall, with a second workshop, where the inmate was fixing cell phones.