How to Fix American Policing

At a painful time, a roundup of proposed remedies 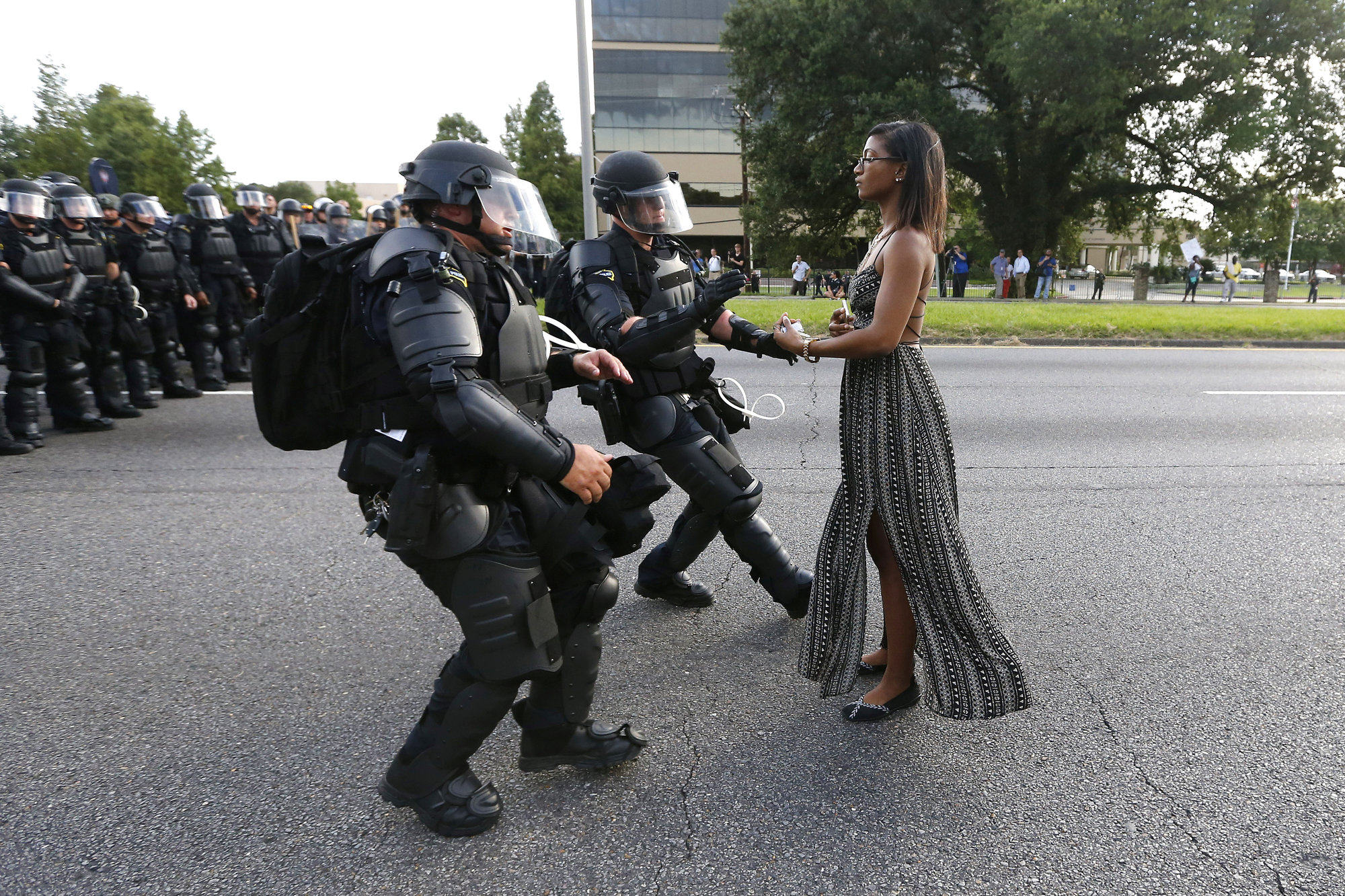 A demonstrator protesting the shooting death of Alton Sterling is detained by law enforcement near the headquarters of the Baton Rouge Police Department in Baton Rouge, La., July 9, 2016. Jonathan Bachman/Reuters
By Ken Armstrong

The question isn’t new, but after last week it seems more urgent than ever: What reforms are available to improve the relationship between police and the black communities they serve?

That question has figured in policy platforms issued by a variety of groups, from leaders of the Black Lives Matter movement (that platform is called Campaign Zero), to the President’s Task Force on 21st Century Policing to the NAACP. Some platforms apply to a single jurisdiction, such as the proposals for the New York City Police Department issued by Communities United for Police Reform. Some ideas come from academics. Some come from community advocates or the ranks of law enforcement. Some ideas have been pitched for decades while others have surfaced in recent years. Many have been discussed at national conferences on this question, hosted by the Department of Justice.

Last week, the tension between black and blue, as some have phrased it, sparked protests and vigils around the country, following the shooting deaths of Alton Sterling in Baton Rouge, La.; Philando Castile in Falcon Heights, Minn.; and police officers Patrick Zamarripa, Michael Smith, Michael Krol, Lorne Ahrens and Brent Thompson in Dallas.

What follows is a canvass of proposed reforms, including ones renewed in the aftermath of last week’s killings:

A national standard for use of force

The United States has about 18,000 police departments, including local, state and federal agencies. What it does not have is a national standard for when the police in all those departments can or should use force. Guidelines vary for the use of guns, Tasers, choke-holds and other kinds of force, as does emphasis on restraint or de-escalation.

Instead of following a uniform policy — something that could be enforced by a threat to withhold federal funding — departments adopt their own, sometimes updating them only in the wake of controversy. The Baltimore Police Department revised its policy two weeks ago, following the death in 2015 of Freddie Gray, who suffered fatal spinal injuries as he was being transported in a police van. U.S. Customs and Border Protection revised its policy in 2014, following an investigation by The Arizona Republic into dozens of deaths at the hands of Border Patrol agents and CBP officers.

The NAACP has supported this proposal for years, and renewed its call after last week’s shootings. Hillary Clinton also voiced support last week for national guidelines. As a reflection of how long this has been discussed, Rep. John Conyers of Michigan introduced legislation in 2000 that included national standards for use of force, but the bill died in committee.

State laws on the use of force vary in the circumstances under which police can be prosecuted for using lethal force improperly. The Seattle Times published an investigation last year of Washington’s statute — “the nation’s most restrictive law on holding officers accountable.” The law, passed in 1986, allows prosecution only if an officer acted with “evil intent.” The Seattle Times found that in 213 fatal police encounters from 2005 to 2014, only one officer was charged — and he was acquitted. A bill to change the state’s law was subsequently introduced, but drew opposition from law enforcement and failed to make it out of committee.

As our Tom Meagher reported two months ago (“13 Important Questions About Criminal Justice We Can’t Answer”), the criminal justice system, including policing, suffers from a stunning data gap. How many shootings are there in America? We can’t say for sure. How many police officers are investigated for misconduct? We don’t know. How often do police stop pedestrians or drivers? Ditto.

When Congress has tried to address elements of this — requiring states to report on people killed in police custody, for example — its efforts have often been defined by a lack of follow-through. What data the government does collect is often riddled with holes. The media, meanwhile, has attempted to fill in the gaps, with investigations on police shootings by The Washington Post, The Guardian and ProPublica.

Proposals to improve police-community relations often emphasize the need not only for accurate information, but to ensure that the information is shared freely with the public. But transparency has been as elusive as sound data. In the last few days — with national attention focused largely on the shootings in Dallas, Minnesota and Louisiana — developments elsewhere have reflected the resistance towards access in some law enforcement and government circles. Last year, the White House invited police departments to commit to sharing more of their statistics with the public. As of April, only 53 jurisdictions had signed up.

The governor of North Carolina signed a bill restricting public access to video from police body and dashboard cameras. “Shameful,” a representative of the ACLU of North Carolina called the law. In Illinois, an appeals court ruled in favor of releasing decades’ worth of complaints against Chicago police; in that case the Fraternal Order of Police had previously secured an injunction, blocking the release. And in California, a local judge ruled that the City of Hayward had charged too much for access to police camera footage from a Black Lives Matter protest in which officers could be heard saying such things as, “They are fucking animals.” The city had billed $3,247 for the video. The judge knocked the charge down to $1.

While the push for police body cameras has picked up momentum — a little more than half of the country’s major cities have committed to them — there have also been other measures designed to document police interactions and make them more transparent, such as this proposal to require New York City police officers to provide citizens with their name and rank, even if not asked.

Last week The Oregonian published a story about a black actor and a white police captain in Portland that captured the good that can come from something so simple as two people meeting to share their experiences. The actor talked of being stopped by police time and again; one time, in a traffic stop over a broken taillight, four police cars pulled up, making him fear for his life. The captain talked of making such stops, of approaching a car in the dark and the fear of someone reaching for an officer’s gun. Both men left with a greater understanding — a principal goal of policing reforms that are centered on building trust by bringing the police and the community together.

The idea of community policing is to get police out of their squad cars, out of their station houses, and into the community where they’re able to walk, talk and listen. The police department in Redlands, California, has embraced this model for years. Scott Thomson, the police chief of Camden County, N.J., says, “We established a culture from very, very early on that the relationship that would bind us with our people was one based upon building the community first and enforcing the law second.” Police interactions with the public shouldn’t be confined to “moments of crisis,” says Thomson, who wants officers to be more guardian than warrior.

Coffee with a Cop, a program that does just what the title says, started five years ago in Hawthorne, Calif., and has since spread to all 50 states. In some places, such as Boston, police have taken to driving ice cream trucks and handing out cold treats to kids. Some departments encourage officers to not only work in the community, but to live in it. Detroit, Baltimore, Atlanta, West Valley City, Utah, Chattanooga, Tenn., and other cities have taken to offering financial incentives, be it cheap home prices, discounted rents, cash bonuses or tax credits, to officers who choose to live in the place they police.

Many police shootings have started with stops over the smallest of infractions. So one category of proposed reforms calls for a drawdown in the policing of comparatively petty matters. Last week a writer for The Atlantic offered one proposal along these lines: Instead of having police pull over cars for a broken taillight — and then approach the driver’s window, initiating the kind of exchange that can go so terribly wrong, as it did with Philando Castile in Minnesota and Walter Scott in South Carolina — how about the police photograph the license plate, then dash off a ticket to the registered owner?

Alton Sterling was hawking CDs in Baton Rouge, Eric Garner was selling loose cigarettes on Staten Island. Both died at the hands of police. Aggressive enforcement against street vendors in effect criminalizes poverty, the head of a non-profit that works with vendors told The Washington Post. A Salon headline called it “criminalizing the hustle.”

The list of proposed solutions from Campaign Zero includes an end to broken windows policing, in which minor crimes are targeted, and an end to for-profit policing, marked by arrest or ticket quotas and excessive fines. Mother Jones coined a term — “policiteering” — for enforcement that seems directed more at revenue generation than public safety, citing Samuel DuBose in Cincinnati and Sandra Bland in Texas as examples of minor traffic stops that escalated. In some states speed traps proliferate. (See: “The Woman Who Spent Six Years Fighting a Traffic Stop.”)

While some reform advocates call for an end to such approaches as broken-windows and stop-and-frisk policing, middle ground can be found, in which police use the tactics less zealously. “Violations of public order rules almost always call for education, reminders, and warnings rather than arrests,” a University of Michigan professor wrote in a broken-windows commentary for The Marshall Project. And New York Police Commissioner William Bratton told our Simone Weichselbaum last year that stop-and-frisk is “an essential tool of American policing,” but has been used too extensively, “like a doctor treating a patient with cancer with chemotherapy.” The NYPD’s use of stop-and-frisk has declined from a peak of nearly 700,000 in 2011 to about 25,000 last year. “It’s a tool that needs to be used with great precision,” Bratton said.

In Chicago, meanwhile, Injustice Watch reported last week on how that city’s use of stop-and-frisk has often alienated communities of color. In just four months in 2014, the Chicago Police Department made about 250,000 stops that did not lead to arrest — and 72 percent of the people stopped were black.

Around the country a host of other reform proposals have been raised, including: