Does the First Amendment End at the Prison Gate?

An inmate’s novel is the latest test.

Though he is a prisoner, Arthur Longworth asserts his right to free speech under the First Amendment. Serving life without parole for a murder he committed in 1985, Longworth has continued to publish an array of stories and essays, including two articles for The Marshall Project, from the confines of his cell at the Monroe Correctional Complex in Washington state. 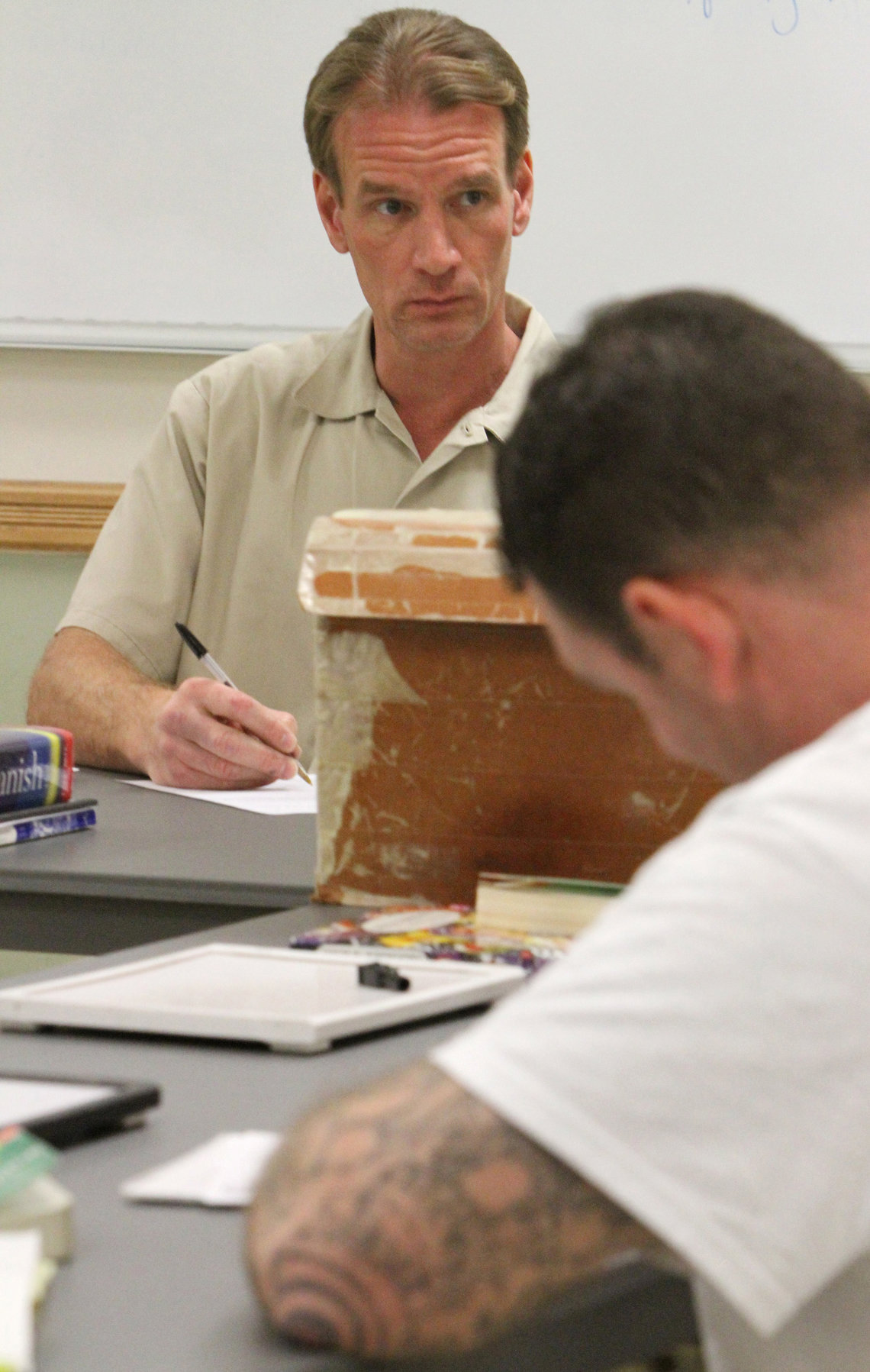 Arthur Longworth leads a basic Spanish class for other inmates in Washington’s Monroe Correctional Complex in 2012.

But the reaction of corrections officials to his latest work reminds us that, in practice, some First Amendment rights are forfeited at the jailhouse door.

In June, Longworth managed to publish the 186-page novel he had been working on for more than a decade. "Zek: An American Prison Story" is now for sale on Amazon, Barnes & Noble, and at a handful of bookstores and libraries nationwide.

The original manuscript, which inmates at Monroe had long passed around in secret, was smuggled out of the prison by a volunteer English teacher in a stack of papers to be graded. Highly praised in The Seattle Review of Books, it chronicles a day in the life of a Washington state prisoner. Many scenes do not reflect well on corrections officers.

On October 13, the Washington Department of Corrections officially banned the book, which meant the inmates who had ordered it would not be receiving their copy. The same day, the teacher who had smuggled it out was sent a letter stating that he could no longer set foot on the prison grounds, on the basis that he showed undue familiarity by assisting with “an offender’s book.”

Meanwhile, Longworth now says he is being threatened on a daily basis with solitary confinement for “knowing better than to do what I did.” (Longworth spoke through a third party, because he is “not free to communicate” by email or phone.)

A spokesman for the corrections department, Jeremy S. Barclay, said the situation is still developing and would not comment on allegations that Longworth has faced punishment. But he acknowledged that the teacher was suspended and that “Zek” has been banned, pending further review, because it describes such tricks of confinement as where to hide tattooing paraphernalia and techniques for transferring contraband. Those passages have the potential to "serve as a how-to guide" for other inmates, the spokesman said.

Longworth’s novel has become a new battleground on the murky territory of prisoners' rights to free expression, which have never been clearly defined. In 1987, the U.S. Supreme Court ruled in Turner v. Safley that "prison walls do not form a barrier separating inmates from the protections of the Constitution," but also that speech can be limited if there are "legitimate penological concerns" at stake. The result of that blurred legal standard is that, in practice, staff at any given prison have great leeway to limit inmates’ privileges — both reading and writing — by citing security concerns or the potential for disruption.

“Censorship is the reality of the prison system,” said David L. Hudson Jr., a constitutional expert at the First Amendment Center. “The Supreme Court pays lip service to prisoners' free speech but has not been very protective.”

As a result, Hudson said, what’s allowed and what’s not varies widely by state and even by prison.

Federal corrections officials in Colorado, for example, once prohibited an inmate from receiving President Obama’s books, on the grounds that they posed a threat to national security. A Wisconsin facility banned materials related to Dungeons and Dragons, for promoting gang activity. In Washington, written materials can be rejected for not being in English; for appearing to be in code; for advocating the "overthrow of authority"; or for depicting the geography of the Pacific Northwest or otherwise being plausibly useful in an escape. The Arizona state prison system censors works related to gambling, hypnosis, tattooing, and “dog psychology.” (See our quiz: “Do You Have What it Takes to Be a Prison Censor?”)

"Most of this is done by some Bozo in the mail room without any expertise in constitutional law, and in a totally arbitrary way," said Paul Wright, the editor of Prison Legal News. (Wright himself published an array of writing while incarcerated in Washington state, where Longworth was a fellow inmate and friend of his.) "The burden of proof they have to meet has never really been explained, so these [officials] basically have carte blanche to impose their literary beliefs on a captive population — as long as they offer some kind of speculation about the book's dangerousness."

But there are indeed legitimate penological reasons for keeping offenders from reading and writing certain books, said Barclay, the corrections spokesman. To permit the exchange of literature that describes acts of brutality, for example, would defeat the larger goal of teaching prisoners that violence is illegal, not entertaining. And materials that contain plans, maps, and instructions for escape are reasonably prohibited because, by law, the corrections system has to work toward the mission of safety.

For these reasons, a manuscript of Longworth’s book was destroyed by guards during a raid of his cell, friends and advocates said. On another occasion, according to The Seattle Times, officials caught him trying to mail the book to his ex-wife, after which he ended up in solitary confinement for two months, accused of trying to start a gang.

Barclay said the corrections department would neither confirm nor deny that Longworth faced such discipline, noting that “his file is too voluminous and lengthy to quickly pull and review.”

Longworth added he felt "more than a bit handicapped doing this from prison, but I still hold onto this hope, no matter how improbable, that the book will be successful."

"Zek," which is an abbreviation of Zaklyucheni, a Russian word for "prisoner" commonly used to describe people sent to forced labor camps under Stalin, literally begins with its protagonist finding subversive power in an illicit novel. The plot follows Jonny Anderson, an American inmate, as he wakes, showers, eats at the chow hall, works on a maintenance crew, looks out for a young convict who has just arrived off the street, delivers tobacco, drugs and weapons as a side hustle, and witnesses several acts of profound violence. Throughout, corrections officers are depicted as almost uniformly cruel, never missing an opportunity to shame, belittle, and harm those in their custody.

According to the corrections department's list of reasons for banning "Zek" (the list mistakenly gives Arthur Longworth's first name as "Author"), "The way the book describes staff, it would drive the tensions between staff and offenders up, putting [them both] in harm's way." The statement also says that “Zek’s” front cover shows the wall of a Washington penitentiary — even though the picture is of San Quentin prison in California, according to the photographer, Katherin Hervey.

"Honestly, banning this book just boils down to [Longworth] being smart, articulate, and writing things that provide negative attention on the DOC," said Marc Barrington, the English teacher who helped get "Zek" published. Barrington said he switched to a minimum-security role at Monroe so that he would not be noticed smuggling out the manuscript, and later convinced agents and publishers in New York City to read it. He remains concerned that what he did will put the prison's college program at risk.

Yet Washington state's crackdown on "Zek" is hardly out of line by national standards. The already vague guidelines of Turner v. Safley have been further complicated by a series of lower-court decisions, and prisoners generally struggle to bring successful challenges to censorship1 without the aid of a lawyer.

Under the Religious Land Use and Institutionalized Persons Act of 2000, religious texts are now protected from censorship more so than other types of literature.

The Maine corrections department recently fought civil-liberties groups over rules prohibiting inmates from "acting as a reporter" or publishing under a byline. Connecticut once sued a group of incarcerated women who had published a book, arguing that they owed the prison system their profits. In 45 states that have passed so-called “Son of Sam” laws, prisoners may not earn any money from selling their stories, on the grounds that it would be profiting from their crime.

And lawmakers in Pennsylvania, seeking to tamp down the controversial speech of a prisoner named Mumia Abu-Jamal, passed legislation in 2014 that prohibited violent criminals from expressing anything that could offend victims. A federal court later struck down that law, ruling that "a past criminal offense does not extinguish the offender’s constitutional right to free expression… Indeed, the high purpose of the foremost amendment is perhaps best displayed through its protection of speech that some find reprehensible."

It was perhaps the strongest language in defense of prisoners' rights under the First Amendment since Supreme Court Justice Thurgood Marshall wrote a concurring opinion on the subject in 1974. Responding to the California prison system's policy that inmates could not send any mail that "unduly complained" or contained any "inappropriate" or "inflammatory" political or religious views, Marshall wrote that "when the prison gates slam behind an inmate, he does not lose his human quality. His mind does not become closed to ideas; his intellect does not cease to feed on a free and open interchange of opinions…nor is his quest for self-realization concluded."