Prosecutor: It’s Terrorism. Suspect: ‘I Was Just Saying Something Stupid’

If it was just a crazy, drug-induced outburst, is it worth 7 years in prison?

Abdurrahman Qadan remembers thinking he was going to die. A 26-year-old software engineer from Oregon, he was in upstate New York last October to meet clients and spend time with a woman he had met through an app for Muslim singles. But his mind started to unravel; he blames Adderall, which he was taking in high doses, unprescribed, and which can cause paranoia and delusions. When he missed a flight home and the woman picked him up from the airport, he insisted she pull off the highway in Monroe, in Orange County, where he jumped out of her car and ditched his luggage.

Police found him on a bench outside a grocery store at 1 a.m. He was convinced that the only way to safety was to get them to take him to jail.

And he doesn’t know why he brought up ISIS.

He told the police there were explosives in his luggage, according to an incident report, which he planned to detonate at an airport. A bomb squad opened his luggage, but found little more than clothes and pills. No bombs were found when police dogs swept through LaGuardia. Later that night, at the police station, Qadan admitted to making it all up. “I was just a lunatic, I was just saying something stupid,” he told officers. The FBI was called in, but Qadan, who is a U.S. citizen, says he has since been assured there is little federal interest in his case.

Orange County prosecutors, however, are charging him with terrorism.

Abdurrahman Qadan told Monroe, N.Y., police he was affiliated with ISIS, but later retracted his statement. Still, prosecutors are pursuing a terrorism charge that could send him to prison for seven years if convicted. Celina Fang/The Marshall Project

He is being held on $300,000 cash bail or $500,000 bond. The most serious of his charges, “making a terroristic threat,” is punishable by up to seven years in state prison. His lawyer, Benjamin Greenwald, says prosecutors under district attorney David Hoovler have offered Qadan four years plus post-release supervision. (A judge would have the final say over such a deal).

Qadan says he will not accept this offer, which means he is likely to face a trial later this year.

Multiple former prosecutors and defense attorneys around New York State say the prosecutor’s response is exceptionally severe. “If you strip away the incendiary Muslim element, you are left with a pretty run-of-the-mill case of ‘falsely reporting an incident’ in the second degree,” says Mike McDermott, a former chief assistant district attorney in Albany County. “A crime, to be sure, but not one that deserves — or often receives — extended incarceration.”

Many federal terrorism trials have featured claims of mental illness. But Albert Cahn, legal director at the New York chapter of the Council on American-Islamic Relations, sees Qadan’s case as a cautionary tale about how district attorneys — who, unlike federal prosecutors, are directly elected — can use state-level terrorism charges to score political points at a time when the president is stoking public fears of attacks by Muslims. “I don’t believe Mr. Qadan would be facing felony charges, much less felony terrorism charges, if he were not a Muslim,” Cahn says. “The general sentiment of the electorate against Muslim individuals creates an incentive to throw the book at anyone who fits the profile of a ‘national security threat.’” 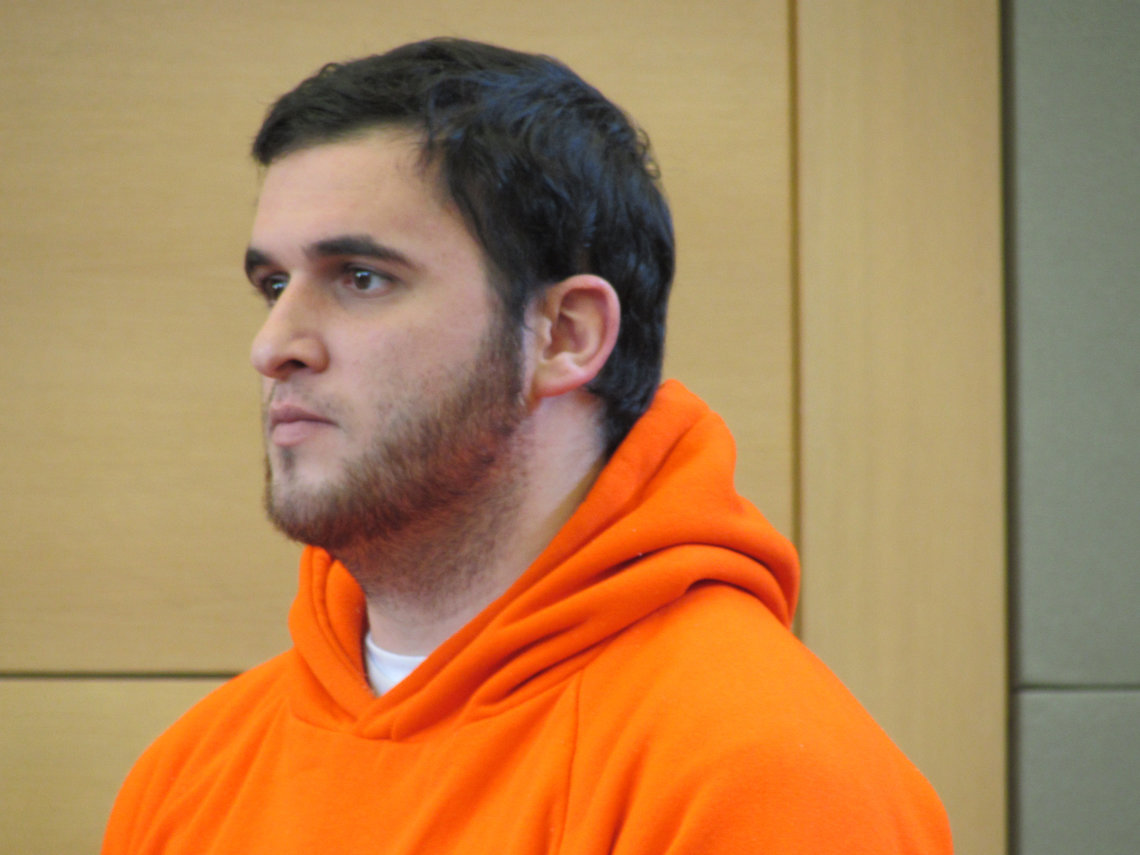 Abdurrahman Qadan was arraigned in Orange County Court, on felony charges of making a terroristic threat, in December 2016.

The Orange County District Attorney’s office disputes that interpretation. “Considerations which this office uses in determining the appropriate plea offer in any case include the facts and circumstances of the offense, as well as defendant’s prior criminal history, if there is any,” chief assistant district attorney Christopher Borek wrote in an email. “A defendant’s religion, ethnicity or political affiliations are never considerations that this office uses in determining plea offers.” Borek declined to discuss evidence in a pending case, citing office policy.

In 2010, Qadan was served a subpoena and met with with FBI agents about a Somali-American college student named Mohamed Mohamud, who was eventually convicted of trying to bomb a Christmas tree lighting ceremony in Portland. Qadan attended the same mosque as Mohamud, and says the FBI agents never indicated that he was himself a suspect.

But Qadan made reference to the Portland incident the night of his arrest in Monroe, and at a December court appearance, Kerry Kolek, as assistant district attorney, said that Qadan had told officers he was somehow involved in the plot.

Given his mental state at the time of his arrest, much of what Qadan said that night will likely be picked apart if the case goes to trial. In a video of his six-hour interview with police after his arrest, he appears to have little connection with reality, sitting in silence for long periods as officers try to interview him and praying when they leave the room. “I’m going to my grave,” he tells them. This was a product of his delusions, he says now, but may have further raised suspicions that he was involved with terrorism. The officers often appear frustrated. “We’re talking to you, trying to build some relationship with you,” one says, “and you’re not talking to us, you’re not saying anything.” 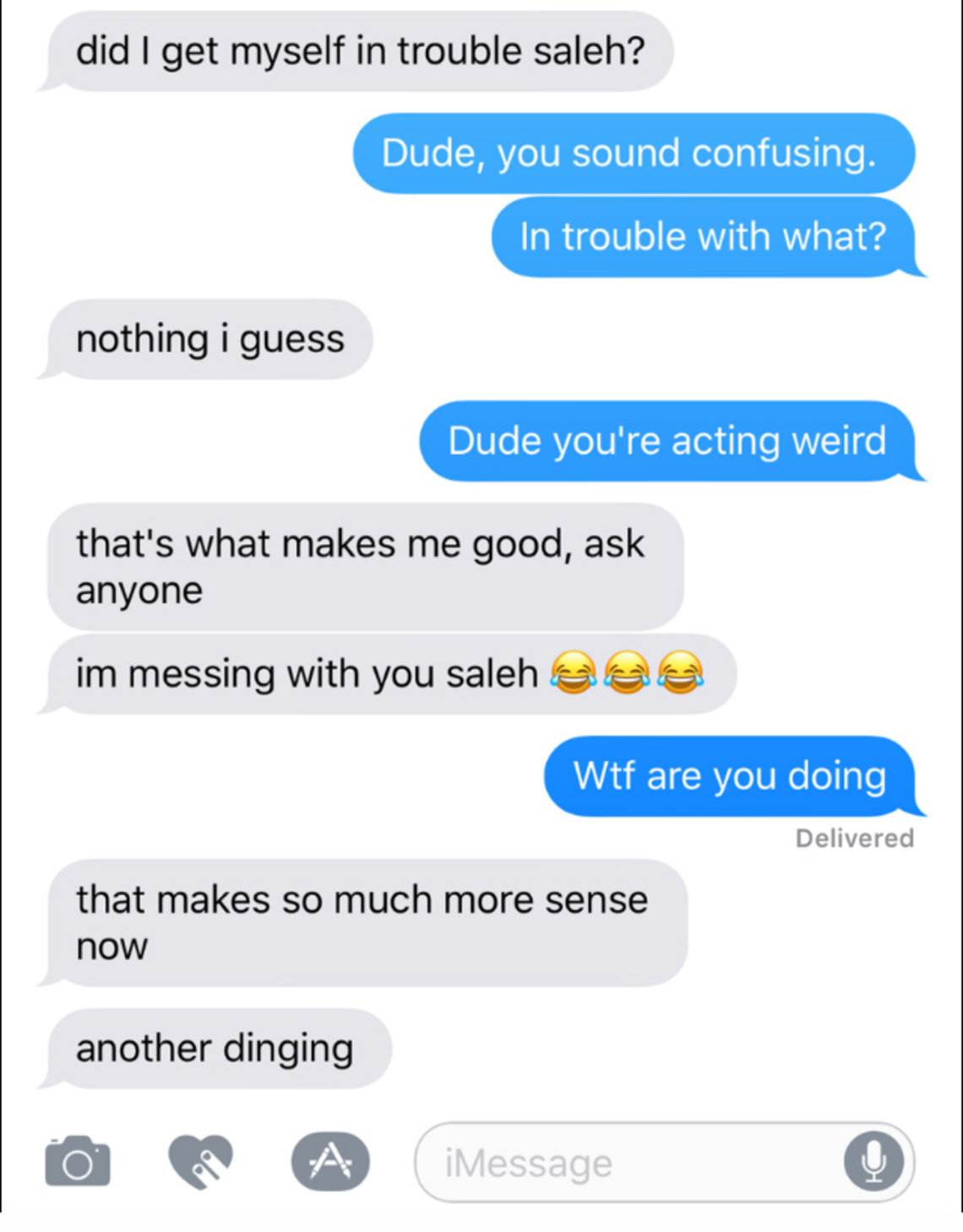 Several days before his arrest, text messages from Abdurrahman Qadan (in grey) to his brother led the Qadan family to worry about his mental health.

Courtesy of the Qadan family

Qadan’s parents, who live in Dubai, suspect that their son is being punished more harshly because of his religion. (His father, Issam Qadan, is Palestinian-American; his mother, Carol Snider, converted to Islam.) They are also wondering if this is a wake-up call to long-latent mental health problems. “He gets very energetic and has all these ideas, he can’t stay focused on one idea, one job, one class,” says Snider, who in the past has asked psychologists for advice on her son’s behavior. In the week leading up to the arrest, he sent nonsensical text messages to his brother, Saleh Qadan, that worried the whole family. Shortly after his arrest, when Saleh visited the jail, Abdurrahman stared at his beard, looking for a seam that would prove he was an imposter wearing a mask.

Greenwald, the defense lawyer, plans to argue that Qadan was suffering from a “drug-induced psychosis” and did not have any intent to commit a crime. He is currently arranging for a psychiatrist to examine him (Qadan has not received a mental health diagnosis.) In the meantime, Qadan is teaching other jail inmates how to code.

“I was planning to move to New York,” he says, with a mix of resignation and humor. “Now the move looks permanent.”