Justice on the Cheap

Thomas Edward Clardy and the trial after the trial.

Kirk and Melissa Clouatre and three children were all together on the night of July 29, 2005 at a body shop in Madison, Tenn., when a car pulled up and three men jumped out. One of the men shot and killed Kirk, who worked there, and wounded Melissa. Another of the men shot Kent Clouatre, Kirk’s brother, who owned and operated the shop. Kent survived.

The brothers were selling marijuana out of the body shop and Kirk had cocaine in his system when he died. The brothers’ drug connections, whatever they were, may help explain why Kent’s initial statements to the police were confusing and contradictory, as was Melissa’s eyewitness account.

She said she had never before seen the man who shot her; that a support pole in the center of the garage obstructed her view. Nor was she able to identify the shooter a week later, after she had recovered from her wounds and left the hospital. Indeed, she later testified, she had no recollection of the answers she had given to the police who had questioned her in the minutes, hours, and days after the shooting.

Kent also told different officials different things at different times. The car the shooters allegedly had driven changed over time. It was a Buick. No, it was a “forest green Taurus.” So did the description of the assailants. The murderer may have had tattoos and gold teeth, Kent said, but he wasn’t sure. A man fitting Thomas Edward Clardy’s description was one of the guys in that car, Kent told the police. No, he did not see Clardy at the crime scene, he told the police during another questioning session. 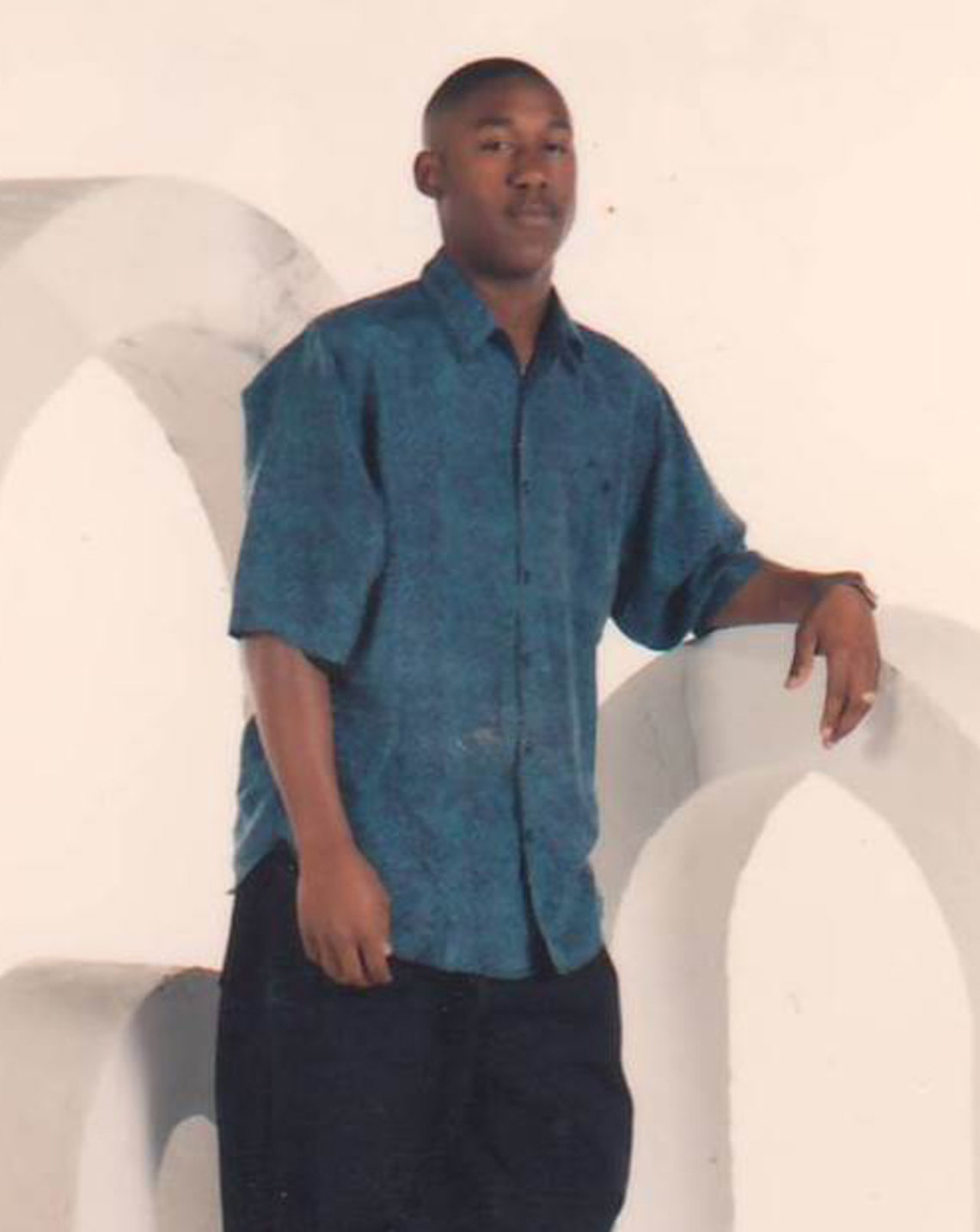 Thomas Clardy was convicted in 2007 of the murder of Kirk Clouatre. Pictured here in 1994, he is serving a life sentence. He says he is innocent.

Courtesy of the Clardy family

Uncertainty aside, in the end it was Kent’s identification of Clardy — from a subsequent photo lineup — and the fact that he said Kirk had known Clardy from around the body shop — that was crucial to the outcome. There was no confession. There was no physical evidence linking Clardy to the crime. The police never tested the shell casings found on the floor of the garage — they didn’t have the weapons, they said.

The jury believed Kent and not the testimony of Clardy’s wife, who told the court that Clardy was with her, at home, when the murder occurred. Another witness also told jurors that Clardy was home with his pregnant wife and her son. It didn’t matter. Clardy had gone missing for four months following the murder, turning himself into the police in January 2006. It didn’t take jurors long to convict him in July 2007. And not much longer for a judge to give him a life sentence. “We will not disturb” the jury’s findings that “accredited Kent’s eyewitness testimony that the defendant shot his brother,” an appeals court concluded in 2008.

The next step for Clardy was a direct appeal of the conviction. The same attorney who handled the trial defense, Patricia Snyder, handled this initial appeal. Unsurprisingly, she did not raise many questions about her own role during the trial. The conviction and sentence were affirmed on appeal, in 2009. Clardy went through one attorney after another, each declining to dig into the record of the case to present new arguments on his behalf.

The reasons for this lack of enthusiasm on the part of the Tennessee bar aren’t hard to discover and don’t necessarily relate to the strength or the weakness of the claims Clardy now makes. As a recent task-force report of the Tennessee Supreme Court concluded, there is virtually no economic incentive for court-appointed post-conviction attorneys to dig deep to uncover new evidence or misconduct by police or prosecutors or trial attorneys. (If you have the money to pay for your own attorney you can spend all you want on investigators and expert witnesses). The system, the judicial task force and defense lawyers agree, is virtually designed to shield injustice from judicial review.

When a private attorney is appointed in a non-capital criminal case, that attorney cannot be paid more than $40 per hour for case preparation nor more than $50 per hour for courtroom work. Those rates haven’t changed in 20 years. No matter how long a case takes to prepare or try, the maximum amount an attorney can be paid in these instances is $1,000 for a misdemeanor and $1,500 for low-level felony offenses. First-degree murder cases that are not capital cases cap out at $5,000 unless a lawyer convinces the judge that “extraordinary circumstances exist.” There are no limits on capital cases.

Tennessee’s rules stack up poorly compared to other states, according to a 2013 report by the National Association of Criminal Defense Lawyers. And no state comes close to the standards applied in federal courts, where attorneys representing indigent defendants receive a rate of $125 per hour with a limit of $9,700 for non-capital felonies and $2,800 for misdemeanors.

An attorney who takes on a case like Clardy’s for its post-conviction review has to evaluate what the trial lawyer did or did not do well and undertake his or her own independent investigation of the facts and evidence because there is no right to have the state pay for post-conviction investigative work. Often this means the well-intentioned attorney has to literally beg experts to work for free. Sometimes an attorney has to take the stand as a witness in a post-conviction hearing because he or she was also the investigator on the case.

Clardy got lucky. On his fourth try, he found Jessica Van Dyke, an earnest Nashville attorney who took a long look at the case file and discovered what she now believes constitutes a valid “ineffective assistance of counsel” claim on Clardy’s behalf.

For example, there is the question of the weapons and bullet casings. In January 2006, six months after the body shop murder, the police found shell casings from a fatal shooting in North Nashville that turned out to match the shell casings found at the body shop. A man pleaded guilty to the killing. Then, six months later, during an undercover operation, police located one of the weapons used in the body-shop shooting. It was in the possession of a drug dealer who was the cousin of the man who had pleaded guilty to the North Nashville murder. All of this occurred before Clardy’s July 2007 trial.

Patricia Snyder, Clardy’s trial lawyer, never requested ballistic testing for her client. She was worried, she said later under oath, that such testing might have redounded against Clardy, connecting her client to the crime or to another crime. She made this choice at trial even though Clardy did not have a serious criminal record, had no connection to any guns, and was telling her he was innocent.

If the gun and shell casings had been tested, Snyder presumably would have been able to stand up in court and say to Clardy’s jurors: Folks, there were three guns used here. We know the shell casings are linked to a guy who has already confessed to a subsequent murder. And we know one of the guns is linked to his cousin. Both were at large in July 2005 when the murder my client is accused of occurred.

There’s more. One of those cousins matched the physical appearance offered by Kent, the victim’s brother. Clardy had neither a tattoo or gold teeth, as Kent Clouatre had testified. But this cousin, the one linked to the guns linked to the murder, had both. Had Snyder sought to obtain the testimony of an eyewitness identification expert, Van Dyke asserts in her latest brief, the shaky cross-racial identification of Clardy (who is black) offered by Kent (who is white) would have been subjected to far more scrutiny at trial than it had been.

Clardy’s trial attorney never requested color photographs from the body shop that Van Dyke says show “that someone left a considerable trail of blood away from the garage and in the opposite direction that the shooters drove.” It turns out it was either Kirk’s blood, or Kent’s blood, which means that Kent may have tried to get away from his shooters and could not have been in a position to identify them as he had said. Moreover, Van Dyke says, those photographs clearly showed the presence of drugs and drug paraphernalia throughout the garage, another potential defense that never was highlighted at Clardy’s trial.

Last week, a Tennessee trial judge rejected all of Clardy’s arguments, vindicating, at least under the law, the work of the trial attorney. Snyder did not render “ineffective assistance” to Clardy when she failed to test those bullet casings, ruled Davidson County Criminal Court Judge Seth Norman. “it is far from unusual for handguns to pass from person to person with no record of sale,” he wrote, and for all anyone knows the two men later linked to those ballistics could have been Clardy’s accomplices.

Put yourself in the shoes of a juror in Clardy’s trial, however: would you have found it material to know that Clardy was linked to none of the ballistics while a confessed murderer and his cousin were connected to the bullets and at least one of the guns used to kill Kirk Clouatre? Would you have concluded that Clardy had transferred the gun, or that he simply wasn’t a murderer?

Likewise, Judge Norman rejected Van Dyke’s argument that her client was prejudiced by the absence of an eyewitness expert at trial. And he said that Snyder’s failure to obtain the hand-written notes of the initial interviews with Kent and Melissa did not prejudice Clardy because “the victims were heavily sedated” and those initial statements “are not more reliable than subsequent statements due to the effects of painkillers.” But that missed Van Dyke’s point entirely. It was the inconsistencies between the statements given by the survivors that would have helped Clardy at trial.

Over and over again, Judge Norman cited the U.S. Supreme Court’s ruling in Strickland v. Washington, a 1984 decision that effectively weakened the constitutional right to counsel first announced in Gideon v. Wainwright. Under Strickland, reviewing judges must evaluate a trial attorney’s performance by making “every effort to eliminate the distorting effects of hindsight.” In hindsight, Judge Norman conceded, Snyder made choices that didn’t turn out well for Clardy. But that didn’t make her “ineffective” under the law and thus didn’t earn Clardy a right to a new trial today.

Clardy’s case helps explain why defenders believe there are many questionable convictions waiting to be discovered. It’s not that he has made an irrefutable case of innocence. It’s not that his trial attorney was a frazzled public defender. It is instead because the post-trial process there is designed to ratify the conviction and sentence by discounting new evidence and justifying trial choices that don’t just look bad in “hindsight.” It’s why the state supreme court task force is stumping for systemic change (and more money for lawyers).

Meanwhile, for her hundreds of hours of work on the case over the years, for helping Clardy when no one else would, for uncovering evidence that casts doubt on a murder conviction, for cajoling investigators to help the cause, Van Dyke will receive at most $2,000, the maximum allowed under Tennessee law for a murder defense. She says she nonetheless plans to continue representing Clardy; the first step will be to ask an appeals court to overturn last week’s ruling against him.