An adman thinks it can help.

Tell young people they might die from gun violence, and the message gets lost in the hopelessness of impoverished neighborhoods, where fatalism runs deep. Tell young men that a bullet could lead to lifelong paralysis and what the pill-makers call “erectile dysfunction,” and you are more likely to have their attention.

This story was published in partnership with The Baltimore Sun.

That is the working hypothesis James Evans reached after conducting focus groups, online surveys and one-on-one interviews in his murder-plagued hometown of Baltimore. Evans, an advertising executive who has developed pitches for such clients as Timberland and CVS pharmacies, is on a quest to promote a message that might ease the spiking gun violence killing Baltimoreans at a rate of almost one a day. His research suggests that the age-old advertising adage, sex sells, may apply when it comes to keeping people safe.

“What does an 18-year-old value?” Evans asked. “Eighteen to 20-year-old men value their freedom. They value their sex, their sex drive. … They value the fact that they can play basketball or run or jump or beat someone up. They do not want to be in a wheelchair.”

Evans assembled focus groups of former drug dealers, mothers of shooting victims and people who lived in neighborhoods beset by violence, and presented them with poster-like messages. One brandished the threat of prison time: a man holding a gun and the slogan, “It Ain’t Worth The 20!” Another featured a man in a wheelchair with the words “Gun Violence Doesn’t Always Kill.” But the poster that resonated most powerfully portrayed scattered bullet shells on a bloody tile floor, and the message: “Saved Him, But He’ll Be Pissing In a Bag for the Rest of His Life … No Sex And No Kids!” 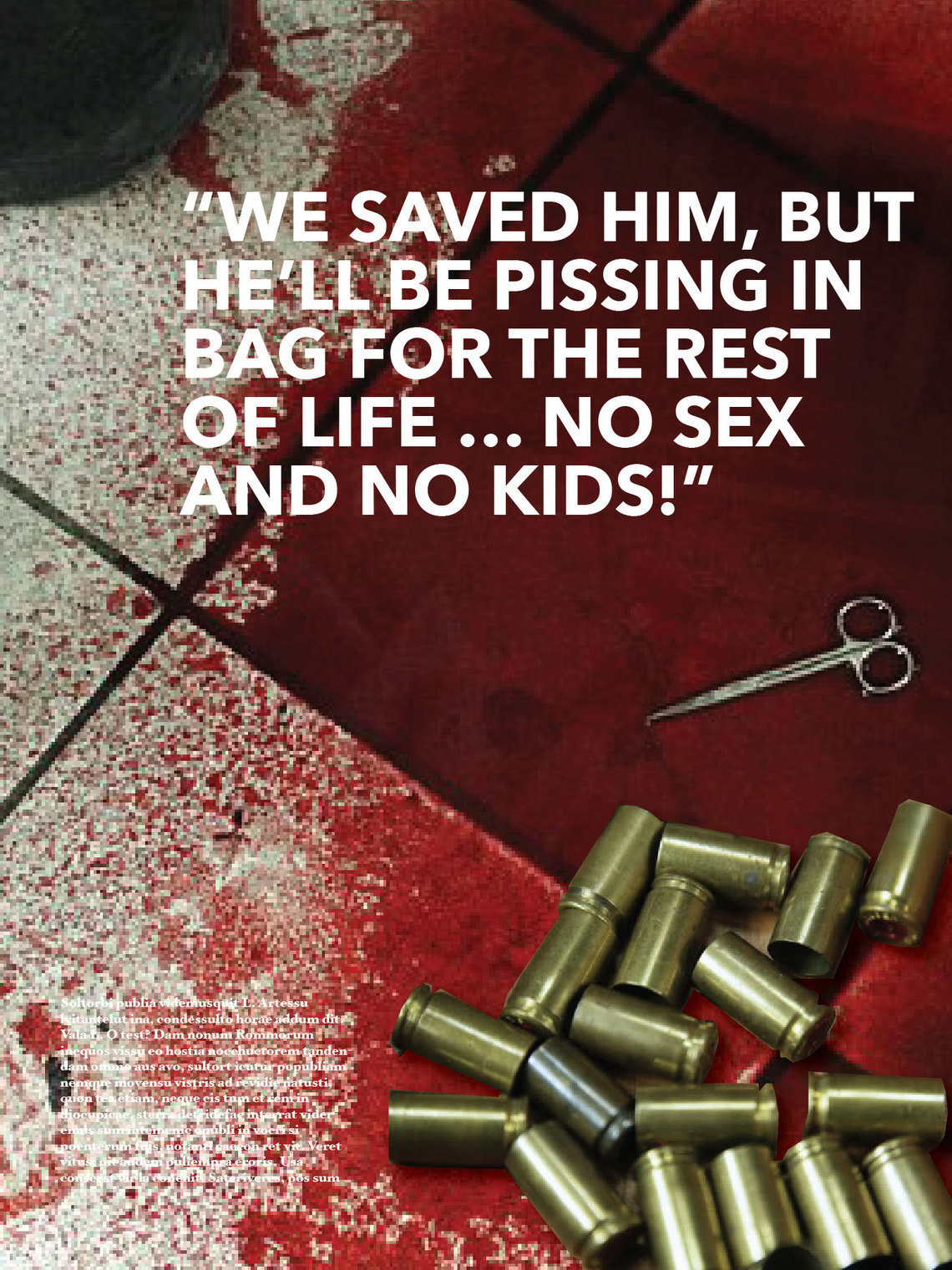 James Evans, an advertising executive, created ad concepts for research purposes that use sex as an incentive to deter gun violence.

Evans, who is African-American, is aware that using sex as an incentive to curb inner-city violence may play to racial stereotypes. But with a dearth of research on preventing gun violence and a homicide rate spiking towards record levels in a number of big cities, he believes in desperate—or at least novel—measures. The “scared straight” messages of past public service campaigns, he said, are ineffective when young men don’t care whether they live or die. Evans’ campaign began last year when a Johns Hopkins University gun violence researcher invited him to a meeting with Baltimore police, city officials and nonprofit representatives to talk about the city’s escalating violence.

Evans, 49, is a Baltimore native who lives in the Reservoir Hill neighborhood. He had come up with a slogan—“Stop Shooting, Start Living”—for Baltimore’s Safe Streets program, which trains outreach workers to defuse potentially violent situations. Maybe he could come up with an effective public service announcement or advertising campaign that could help with the spike in shootings.

After gathering about $30,000 in foundation grants for his research and a marketing plan, Evans found that anti-violence messages coming from mothers were particularly effective. So were reminders of the direct and indirect impact of gun violence on children. The possibility of life in a wheelchair really weighed on the men. And so did the mock-up ads threatening “No Sex.”

“Around here... that one there would catch their attention,” said one focus group member quoted in Evans’ marketing study. “ ‘...no sex, no kids,’ they would think about that for a couple of minutes. Because that’s probably all they think about is sex, money and guns.”

Scott P. Charles, director of the hospital-based violence prevention program Cradle to Grave at Temple University Hospital, said he thought the message could be effective. Eighty percent of gunshot victims in Philadelphia survive, Charles said, and the prospect of severe disability is “far more compelling to our participants than death. You’re sentencing them to a lifetime of suffering here,” he said.

Ray Winans, a violence mediator and former Detroit gang member, adds that it is not just the loss of physical abilities that scares men, but the loss of relationships. “When you try to use death or incarceration, well, we’re all going to die and everyone knows someone who has gone to prison,” said Winans, who works with Ceasefire Detroit and Detroit Life is Valuable Everyday, a hospital violence intervention program. “The greatest influence I’ve seen on this group? It doesn’t come from the mothers or the sisters," he says. “It comes from the girlfriends.”

Other researchers question whether sex should be part of any urban anti-violence campaign. Tolulope Sonuyi, an emergency room doctor and assistant professor at Wayne State University School of Medicine, said public service announcements based on the approach was a “very lazy, passive approach to a complex and nuanced issue.” Whether based on fear of death, prison or impotence, “scare tactics” are no substitute for job opportunities, mentoring and mental health services, Sonuyi said. He is concerned the kind of campaign Evans proposes could perpetuate stereotypes of black men being unable to control their sex drive, a caricature that dates back to slavery when men were viewed as a breeding commodity, according to Sonuyi.

"No one is saying only African American men would be caring about their prowess,” Evans responded. “It’s just that the audience happens to be mainly African American men.” He is not the first to imagine a strategy of exchanging sex for peace. Daniel Webster, director of the Johns Hopkins Center for Gun Policy and Research, recalled the 2015 Spike Lee film “Chi-raq,” based on the Greek comedy “Lysistrata,” which featured a subplot of women in Chicago withholding sex to coerce their partners to put down guns. But Webster, who helped Evans get funding for his research, said the sex angle was not “fully developed.” “Generally, trying to scare people just doesn’t work,” he said.

Evans is now looking for someone to fund his campaign. He started it himself on social media with his own $4,000, which paid for the first ad. He’s hoping a nonprofit group or other funder will see his ad and help pay for a full national campaign, which he estimates would cost about $250,000 for two years. This week, the Baltimore hip-hop radio station, 92Q Jams, shared a video from the campaign on its Instagram site.

Without knowing more about the research behind it, Baltimore police won’t endorse Evans’ idea. But spokesman T.J. Smith said the agency is supportive of grassroots movements looking for solutions with “creative and outside-the-box suggestions.”