A Chaplain’s Conscience vs. the Bureau of Prisons

Stalemate over a can of pepper spray.

The prisoner emailed his chaplain to say his sister had recently died, and he needed a man of faith to lean on.

“It’s been a battle for me lately,” the email read. “I really needed you on the compound, man. I really ain’t got nobody to talk to that understands what I’m going thru. Only peace I really have is in the word, chap. I can’t find no relief, no other way, so I stay mostly in my cell.”

The Rev. Ronald Apollo sat frustrated just a few yards away from the inmate, unable to go and see him. The chaplain has been confined to a desk near the warden’s office, away from prisoners since August, stuck, he says, in a stalemate between federal orders and religious rights.

Know this, Apollo wrote back. “In our weakness he is strong,” the chaplain told the inmate. “He will deliver you out of the miry clay. I know what prayer can do.” 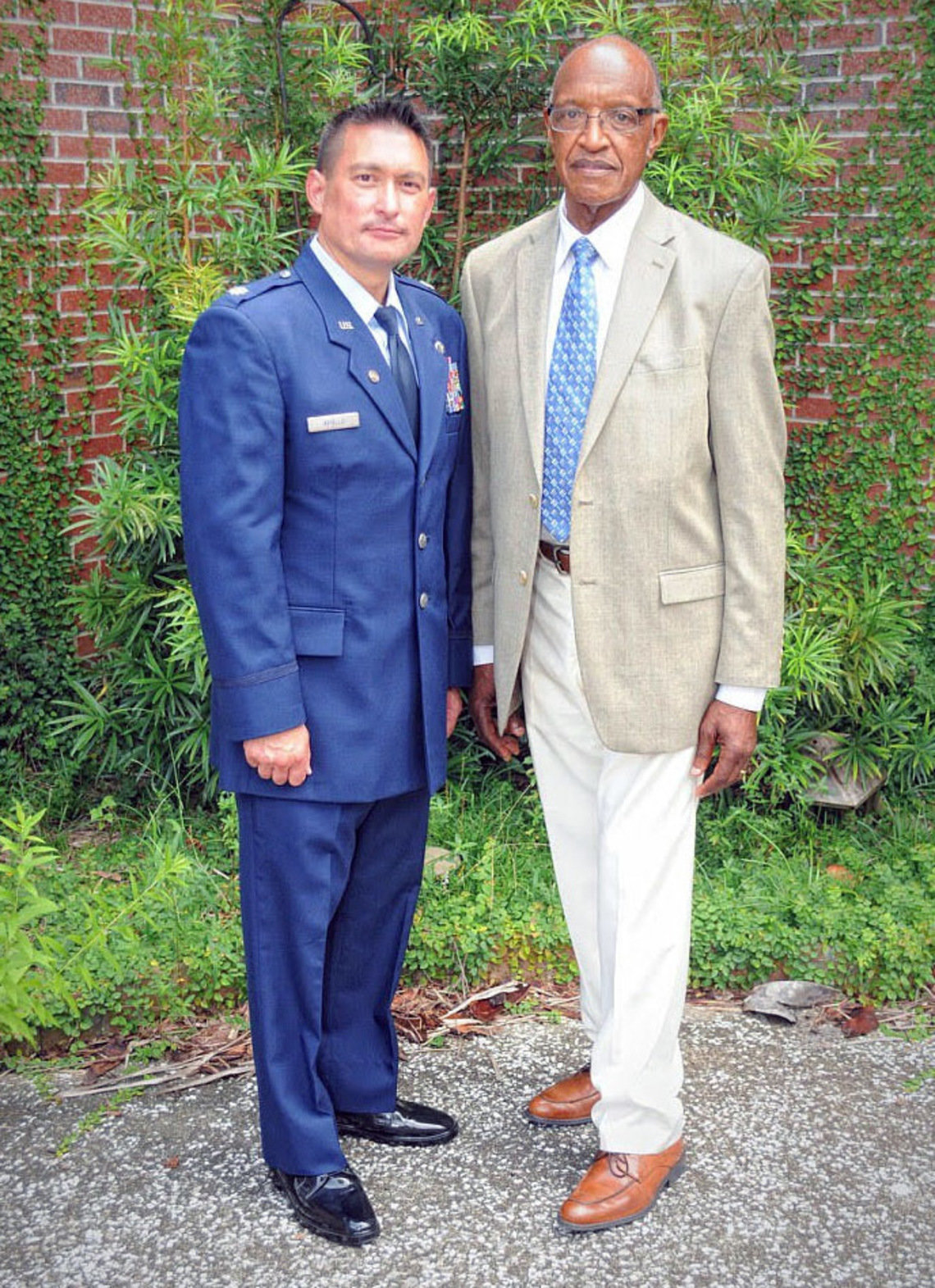 Chaplain Ronald Apollo, left, standing next to his mentor, Dr. Bishop M. Bullock, during his August 2017 retirement ceremony. Apollo served in the military for over 27 years.

In his more than 25 years as a military and prison chaplain, Apollo has seen hardened hearts soften, gang members renounce their memberships and men sentenced to life without parole walk out of prison after the president commuted their sentences. In his current situation, he often mulls over Isaiah 40:31 as he faces long odds fighting the federal Bureau of Prisons.

“They that wait upon the Lord shall renew their strength …”

Apollo is the head chaplain of FCI Bennettsville, a medium-security federal correctional institute in South Carolina. He also served as a military chaplain for the Air Force, on reserve status since joining BOP a decade ago, until he retired from the armed services in August. In all his career, he says, he has never been required to carry a weapon or protective equipment, even in combat zones.

But this year, the federal Bureau of Prisons told him he must carry pepper spray while on the job because of a year-old policy crafted to protect correctional workers.

Apollo is a member of the Church of Our Lord Jesus Christ of the Apostolic Faith, which calls on its members in its bylaws to renounce “the weapons of human strife.” He believes that includes the Oleoresin Capsicum or “O.C.” aerosol spray he has been told to carry along with his radio and keys as he moves throughout the gray stone compound that houses more than 1,200 male prisoners.

To Apollo, carrying what he deems to be a weapon compromises his impartial status as a counselor and aligns him with correctional officers, not clergy.

“The U.S. Department of Justice,” he says, “should be ashamed.”

In the chaplain’s view, two avowed priorities of the Trump administration are at war here: The promise to protect law enforcement, and the championing of Christian values.

But the Bureau of Prisons’ position is simple: It’s the law.

“Chaplains, like all other Bureau staff, are trained as correctional workers first and are required to respond to emergencies,” federal prison system spokesman Justin Long said in a statement. “Therefore, they are expected to carry O.C. (spray) in accordance with the law and policy.”

Apollo, 44, became a chaplain after he said he had a vision that God was leading him into prison ministry as he transitioned from active military duty to the reserves. He took it as a divine sign when he mentioned his desire to another military chaplain who just happened to work for the BOP.

He grew up in the Kentwood public housing complex in Raleigh, N.C., where he said he occasionally sold drugs as a teen to buy shoes and clothes before he joined the military — experiences that make him empathetic to many inmates’ backgrounds.

“I'm there to bring hope, to bring faith, hope and love to these guys,” he said. Melvin Bullock, a Bishop in Apollo’s denomination and a retired chaplain for North Carolina’s prison system, said carrying anything that resembles a weapon is a “false representation” to inmates, whom chaplains try to steer away from violence.

“From a chaplain’s perspective, it’s hard for them to take you seriously,” Bullock said. “If you’re armed, that’s an indication that if need be, you’ll use it. It puts you on the same platform as the correctional officers.”

Chaplains in the BOP didn’t have to carry pepper spray until Congress passed the Eric Williams Correctional Officer Protection Act of 2015.

Williams, 34, was a correctional officer who was stabbed to death by a prisoner in 2013 while working at USP Canaan in Pennsylvania, a high-security federal prison. Three years later lawmakers passed the act in his honor, directing the BOP to issue O.C. spray to “any officer or employee of Bureau of Prisons who is employed in a prison that is not a minimum or low security prison” and “to such additional officers and employees of prisons as the (BOP) Director determines appropriate.”

Don Drewett, National Legislative Coordinator for the Council of Prison Locals C-33, which represents nearly all federal prison workers, said the union fully supported the act. Drewett said union officials consider pepper spray nothing more than non-lethal protection for its employees, who are spending more time alone on the prison floors because of a self-imposed BOP hiring freeze.

He said the spray could save lives, not only of guards and chaplains but of inmates. “This is a tool that allows people to quite possibly live to see another day,” Drewett said.

While the Bureau of Prisons said it was committed to working with chaplains to address any concerns about religious practices or beliefs, Long said the agency must also maintain “security, safety, and good order.”

“Carrying O.C. Spray enables staff to protect the safety of inmates and staff and ensure institution security when other means of control have been unsuccessful,” Long said.

The union says the spray is not a weapon, although, Apollo points out, some states don’t allow felons to possess it.

According to a March 2016 report from the The International Network of Civil Liberties Organizations, no fatalities are known to be directly linked to the spray, which has come under more scrutiny in the past few years as police have increasingly relied upon it to control crowds during protests or riots. The spray consists of concentrated forms of capsicum which is the chemical that makes pepper hot, and it works by attacking the body’s pain and temperature receptors. Eyeball ruptures, blindness, amputations and persistent symptoms of psychiatric problems and asthma have been linked to O.C. spray, the report said.

A month before the Eric Williams Act was passed, Apollo said, a BOP newsletter stated that chaplains would be exempt from the requirement. That point was reiterated in a memo in March of 2016, he said.

But a year later, just days after President Donald Trump’s inauguration, the BOP made carrying O.C. spray mandatory. Apollo fought the order and won a temporary reprieve, but in June the bureau said the policy must be enforced.

One of Apollo’s subordinates, a chaplain from the Evangelical Covenant Church, began carrying the spray as required while another, a Methodist minister, was allowed to work at a lower security camp on the prison grounds, where he would not have to carry pepper spray.

Apollo refused to carry the spray, and was consigned to a desk, where he cannot meet with prisoners, though he can arrange services for them.

Not all federal prisons are as rigid. Chaplain Marcus Branch of MDC Brooklyn, which houses inmates of all security levels, said members of his department are not required to carry the spray while most of the prison's workers are.

“As a chaplain I cannot blur the line of my role,” Branch said.

Apollo said he hopes Mark S. Inch, a retired Army general named the new director of BOP this summer, will review his case. The fact that Inch graduated from a Christian college and has been quoted as seeking the counsel of a military chaplain to cope with issues he said grew out of post-traumatic stress gives the chaplain some hope.

“This chaplain has to think about: Is his main job to evangelize to those men?” said Doris Bergen, author of “The Sword of the Lord: Military Chaplains from the First to the Twenty-first Century.” “Is his main job to be a conscience for the prison as a whole, which means things like reporting when people are badly treated? Or is his job to uphold the order and authority of a prison? And those things are going to come into conflict when you think about things like carrying pepper spray that’s going to undermine his credibility with the prisoners, who will say ‘look he’s one of them, not one of us.’”