When Your Prison Becomes Your Paycheck

Some states are welcoming back ex-offenders to work behind bars.

By Maurice Chammah and Joseph Neff

In 2010, Cindy Stubbs was nearing the end of a 14-year sentence in a South Carolina prison, determined never to return. A mother of four, locked up on gun and drug trafficking charges since she was 34, Stubbs worked inside the prison translating textbooks to Braille. Three months before her release, she caught a break: a telephone interview at another Braille plant, in North Carolina, led to a job offer.

This story was published in collaboration with The Daily Beast.

But there was a catch. This plant was also in a prison. She’d be managing prisoners, returning every weekday to exactly the sort of place she’d spent years waiting to leave.

“At the beginning, it wasn’t easy,” said Stubbs, now 55. “Some people in society feel when someone is able to come out of prison and make a good salary and a good position, they don’t feel like you are deserving of it.”

She is one of a small number of former prisoners who have returned to penitentiaries as employees after their release. At least 30 states have policies to allow such hiring, though they do not necessarily track how many they have brought aboard. But a few agencies are beginning to formalize programs, with the explicit goal of reducing the stigma that can follow ex-prisoners as they look for jobs. 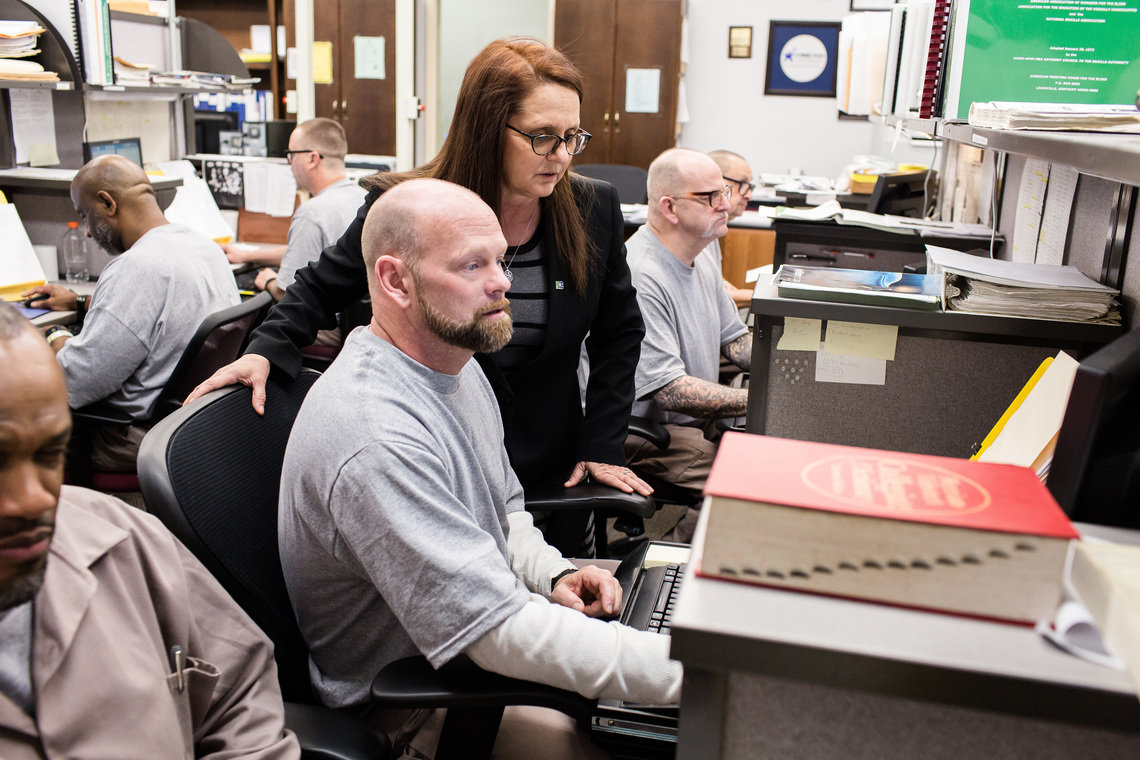 Justin Cook for The Marshall Project

In December, a new law began allowing the Michigan Department of Corrections to hire those it has released, after the agency openly promoted the idea.

“We knew that as we were going out every day talking to the business community and asking them to hire our parolees, that it would be hypocritical if we wouldn’t hire them ourselves,” DOC spokesman Chris Gautz said.

In the many states that allow such hiring, there can be myriad restrictions. Most do not allow ex-prisoners to be correctional officers. Texas largely limits hiring to certain positions, such as substance abuse counselors and contract construction workers, and some sex crime convictions are disqualifying. California bans ex-prisoners from jobs that involve access to personal or medical information of other staff and inmates. Minnesota makes them wait a year after release, and Wyoming won’t let them work in the same facility where they served until five years after release.

Many states don’t track how many ex-prisoners they have hired, but those that do aren’t reporting big numbers; Arizona said they have had hired “at least 11” ex-prisoners.

The Pennsylvania Department of Corrections changed its policies in 2016 and sent its own recruiters to job fairs for ex-prisoners, but none applied. (Karena Parks, who runs the agency’s human resources bureau, thinks it’s only a matter of time.)

It might not just be the restrictions. “I was very apprehensive,” said David Van Horn, the first ex-prisoner hired by the New Mexico Department of Corrections in 2015 as part of a new “Returning Citizen Program.” He was released on parole after spending 20 years in prison for killing 68-year-old Norma Clouse in an arson attack after he “abused and terrorized” her and her husband, according to legal records, and then shot two law enforcement officers.

He was hired to work in a kitchen, in a cafeteria that feeds officer cadets. The response to his hiring illustrated the political obstacles programs can face: the family of Van Horn’s victim was outraged. “Burning somebody alive is one of the worst things you can do to a person,” said Clouse’s brother, John Bailes, noting that he was not informed of Van Horn’s parole or hiring before they happened. “He’s supposed to find his own job and housing.”

The corrections union noted Van Horn’s starting salary would be $17 an hour, more than rookie officers, though as a contract worker he’d be paying higher taxes. “He’s going to be interacting with the same inmate population he served with, while earning four more bucks an hour than the officers who protected him,” union chapter president Robert Darnell said in a press release. “It’s a bridge too far.” Van Horn said his pay was dropped to $15 by the administration, which did not respond to a request for comment. He is no longer in the job.

Other corrections officer unions around the country have expressed similar concerns. In Michigan, a union newsletter said the new policy was met “with mixed feelings and some confusion.” Spokeswoman Anita Lloyd said in an interview that the union is more comfortable with the formerly incarcerated working in rehabilitation programs.

Ex-prisoners who have returned have said they can serve as role models for the people still inside. “I really want them to know there is hope out there,” said Larry Vene, who served more than four years in Washington state for producing methamphetamine. He learned to be a wastewater treatment plant operator while inside, and then returned to the department in 2013 to train current prisoners. “They listen to me because I’ve lived what they’re living.”

For Stubbs, who still manages 22 prisoners at the Braille plant in a North Carolina prison, the biggest shift was mental. Interacting with other staffers in her new job, she said, her mindset was “stay behind the yellow line” and “yes, sir” and “no, sir.” One day an administrator shook her by the shoulders. “She said, ‘You are not an inmate anymore’,” Stubbs said. “It took me a minute to adjust.”

Like Vene, she enjoys being a role model for her employees, but her past also gives her a nose for trouble. Before opening, she identified every hiding place in the office, filled with cubicles, bookshelves and computers. She knew which inmates to hire: avid readers with no “disobeying orders” violations in their jackets.

Six months after opening, an inmate asked how she knew so much about prison. She told her story. “My history is an encouragement to them,” she said, “but they also know I do this for a living, and I don’t put up with any foolishness.”